The technology market in South Africa is much smaller compared with the European and American giants. Tarsus Distribution Group CEO Miles Crisp uses that to his advantage.

The technology market in South Africa is much smaller compared with the European and American giants. Tarsus Distribution Group CEO Miles Crisp uses that to his advantage. 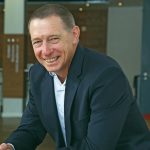 If you had to make a decision to ply your craft as a leading technology distributor anywhere in the world, where would you go? You’ve got North America with the US and Canada as good choices. An alternative could be the UK or somewhere in Europe. Perhaps as we head arguably into The Asian Century, somewhere like Taiwan, Singapore or South Korea could be perfect locations?

In the case of Miles Crisp, it would be none of those places. He is happy staying put in South Africa, his homeland for practically all of his life. “I hear a lot of talk, people constantly assessing whether they should stay or go. I’ve turned 60 recently, so I do think about it. My children are young. They’re young professionals,” the Tarsus Distribution Group CEO ponders. “I think if you approach your life and your family and your business on the basis of ‘What can I get out of it?’ and ‘How can I look after myself?’, you will move to those countries with that same attitude. If you retrain your brain to say ‘How am I making a contribution?’ instead of ‘What’s in it for me?’, South Africa is an amazing place. It is very easy for the average person to make a significant contribution. You can make sure that the children of your staff can apply for jobs or internships when they’ve finished school. You can do very small things in South Africa that are easily taken for granted elsewhere in the world, which make huge differences to people’s lives here and help shift an entire society.”

“You can do very small things in South Africa that are easily taken for granted elsewhere in the world, which make huge differences to people’s lives here.”

In stark contrast to Miles’ status as a leader looking to transform South African society, the market itself is more of a follower than a leader. Relatively small compared with the rest of the world, especially Europe and the US, Miles has to stay on top of the latest trends and developments abroad. In considering how IT is consumed in the country, he estimates South Africa is around a year behind in terms of innovation.

“For example, an enormous organisation like Amazon with its online services and distribution networks has not moved into the country. It has got far bigger markets to focus on breaking into,” Miles notes. “At Tarsus, we have an opportunity to build on a much smaller scale. This means that while we don’t get the efficiencies of scale, we can build and compete with some of those large organisations because, for now, we’re small and able to watch and follow.”

But alongside the follower advantage come a myriad challenges. First, and arguably most notable, is the country’s currency volatility. Because Tarsus imports a lot of its IT equipment, there is simply no stability when it comes to pricing in that market. That turns to budgeting struggles and a need for improvisation.

The second hurdle is the very expensive cost of capital. With prime interest rates at 10.25%, Miles says very few countries in the world can operate in such a business environment. “It means we’ve got to squeeze every little bit that we can out of the modules available to us,” says Miles. “That’s the difference with places like Europe or the US where prime rates are so cheap, like 2.25%. They are not as sensitive as we are in how they manage their working capital.”

Then there are South Africa’s ongoing political issues. The country’s political struggles are still dealt with on a daily basis, nearly three decades after the end of Apartheid. While Miles finds the overall lack of social progress upsetting, he says the country’s ability to face it head-on is a positive and should not be discounted.

“In South Africa, you can’t deny the country’s racist past. It’s in your face every day. It terrifies you and you can easily get depressed about it, because it’s not about confronting other people. It’s about confronting yourself. On the other hand, I think as much as we beat ourselves up over it, South Africans have become much better at finding ways to talk to each other. I think we can be absolute world leaders at diversity and tolerance.”

“South Africans have become much better at finding ways to talk to each other. I think we can be absolute world leaders at diversity and tolerance.”

Amid such a social and political context, South Africa’s competitive advantage compared with other markets’ is the importance of being able to recruit young people for potential and then educating, training and developing them. While Tarsus looks for experience in its recruitment process, it doesn’t, like in developed economies, hire someone on the basis that they’ve done the job before. “We simply can’t do that in South Africa,” Miles says. “You have to hire people on the basis of their potential and their intellect.”

Nor is it all about soft skills, happiness in the workplace, or benefits for staff. To Miles, it is also about setting standards really high, holding people to those standards, and making sure they get the means and have the ability to do what you need them to do. That means choosing staff carefully, learning to delegate effectively, and putting processes and systems in place to monitor them so you can keep stretching their skill set.

Fast facts:
Tarsus Distribution has its own foundation that contributes to various non-for-profit organisations in South Africa that focus on early childhood development.

“What I’m passionate about, and what gives me enormous amounts of pleasure, is if I see a young person over a period of two to three years being able to take on more and do things, and do them happily, without cracking under the stress. I think that’s my underlying philosophy, and so the company becomes a vehicle for that. It’s to not just provide returns for the shareholder, but to provide growth opportunities for all people.”