Our growth story is based on customer happiness: Steve Tzikakis “I’m a big user of our own systems,” Steve Tzikakis, President, EMEA South at SAP tells The CEO Magazine. “I have a digital dashboard in my office from where I manage the EMEA South region’s 75 countries.” The night before speaking to us, Steve reveals he was still awake at one o’clock that morning, busy using his company’s “innovative solutions” to create a consolidated picture of the financial quarter – an hour after it closed.

Every inch the poster boy for SAP’s Intelligent Enterprise strategy, he was able to quickly convert real-time data into insights he could then present to his board. The fact that Steve and his colleagues are big believers in their own products is one of the qualities he believes gives the German multinational business software company the leading edge. As does valuable brand recognition.

The company has recently been recognised as the 16th most valuable brand in the world (according to the annual BrandZ Top 100 Most Valuable Global Brands ranking). “We’re not simply a high flyer who comes and goes and we’re never just the flavour of the month,” he laughs. “Instead, we’re associated with quality, innovation, customer satisfaction and tradition.”

This reputation has helped propel SAP to incredible heights: currently 77% of global transaction revenue comes into contact with a SAP product. Its vision of helping the world to run better therefore seems more pragmatic than idealistic.

“It allows us to impact people in their millions,” Steve answers when asked what such influence means. “Whether it’s the economy in Qatar that’s under an embargo and needs to develop vertically integrated business so it can be self-sustained, the automotive parts industry in Spain or Turkey that has to compete fiercely with their peers and competitors from Northern Europe, or the fast-paced fashion industry in Italy that’s challenged with accelerating sustainable business practices in its resource-intensive environment or millions of people in Western Africa who need a reliable banking system – we’re privileged to help them all,” he says.

“I always jokingly say that we achieve at SAP what the United Nations hasn’t managed to!”

As President, EMEA South, Steve oversees Southern Europe, Africa and the Middle East, which equates to
24 office locations, five time zones, 4,713 employees and 85 nationalities. “We have every religion and every language going, every genetic background you could imagine and, for me, that’s the most exciting thing,” he says.

“I always jokingly say that we achieve at SAP what the United Nations hasn’t managed to!” He is particularly proud of the company’s people agenda, especially as it relates to the attraction and development of young talent through SAP’s Sales Academies and the meaningful promotion of diversity, inclusion and “the beautiful combination of youth and the experience grey hair brings”.

This “multicultural mosaic”, as Steve calls it, helps keep him fresh more than a decade after he first started in the company. “Companies that cultivate a culture of diversity and inclusion outperform their competition and win the battle for top talent. This is something that SAP is passionate about. Promoting diverse talent results in higher customer satisfaction – which is definitely playing out in our region.”

A year after joining as a London-based sales director in 2008, Steve was made Managing Director of Russia and the CIS (formerly the USSR), a move he believes proved to be “the turning point”. His career at SAP has taken him to the Middle East, Moscow, Athens, and back to the Middle East. “These different roles have allowed me to meet the world and learn about different cultures. I’ve had a pretty good career as well,” he laughs.

Right now, it seems he wouldn’t want to be anywhere else. “I would say EMEA South is one of SAP’s best regions and we’re seeing huge acceleration in the adoption of transformational technology right across the region, no matter what level of market maturity.

The opportunity is huge and exciting for me and my team while the positive Net Promoter Score our customers give us is reassuring validation that we’re definitely on the right track,” he explains. “Our growth story is based on rock solid quality, customer intimacy and happiness, and since the market has clearly understood that we have the unique breadth to help businesses digitally transform, forward-looking CEOs recognise innovative technology not only as a means to succeed, but also to thrive.” In the five years since he became President, EMEA South, Steve has overseen significant progress in a region that currently comprises 22,904 customers across 26 industries. “The size of our business has doubled across all dimensions: the countries where we are represented, our employees, and the unique in-country value we provide in many of these societies,” he says.

A great number of these countries rely on SAP for their infrastructure, banking systems and even “how their governments are run”. The result is win–win. “It’s not only a beautiful story for our shareholders, but a powerful one for our stakeholders in these places.”

“It’s not only a beautiful story for our shareholders, but a powerful one for our stakeholders.”

Along with the strength of his team and stream of satisfied customers across multiple industries, Steve is quick to attribute much of this “architecture of success” to SAP’s partners. “We have an open-source culture as it relates to our partners and, even if I take it back to the mid-1990s, this burgeoning partner ecosystem is probably the reason why SAP has outgrown most of its competitors,” he explains.

“We quickly realised that if you want to implement systems tapping 77% of the global economy, you
can’t do it with the 10 or 15 thousand consultants we have at SAP. You need more like two million, and this is how SAP has managed to develop system integration partnerships with most of the big names that you recognise.”

Perhaps none more familiar than EY, which in only five years has become the fastest-growing SAP partner globally. SAP’s EMEA South region is the firm’s fastest growth region. Of SAP’s network of global partners, 1,273 are active in EMEA South and Steve estimates that approximately three-quarters of its revenue comes via these partnerships.

“Our partners benefit from the fact that as a company that wants to be close to its customers, we choose to invest strategically in key locations around these regions.” This, he says, creates a certain level of intimacy.

“When you open an office in Egypt, Algeria, Morocco or Pakistan, markets that others may not consider, that brings you close,” he explains. This ability to serve both the leading players of a specific market as well as the subsidiaries of global enterprise, helps SAP build relationships that go the distance.

He is, however, aware that his region faces distinctive challenges. “You can’t approach some of these countries with the mindset of a mature market. In some cases, the customer readiness and infrastructure is not yet there,” he says.

“You have to make considerations that help you adapt.” Steve’s geographical scope stretches from the shores of the western Mediterranean to markets that have faced recent economic adversity such as Turkey, South Africa and Pakistan.

“There are also countries showing super-high growth, such as the UAE or the Kingdom of Saudi Arabia, both with momentous digitalisation requirements,” Steve says. ‘Southern Europe is reinventing itself by embracing technology, and the developments we’re witnessing in the fashion, retail, utilities and travel industries are staggering in the context of the Experience Economy, thanks to IoT, AI, machine learning and blockchain, where it’s all about personalisation. 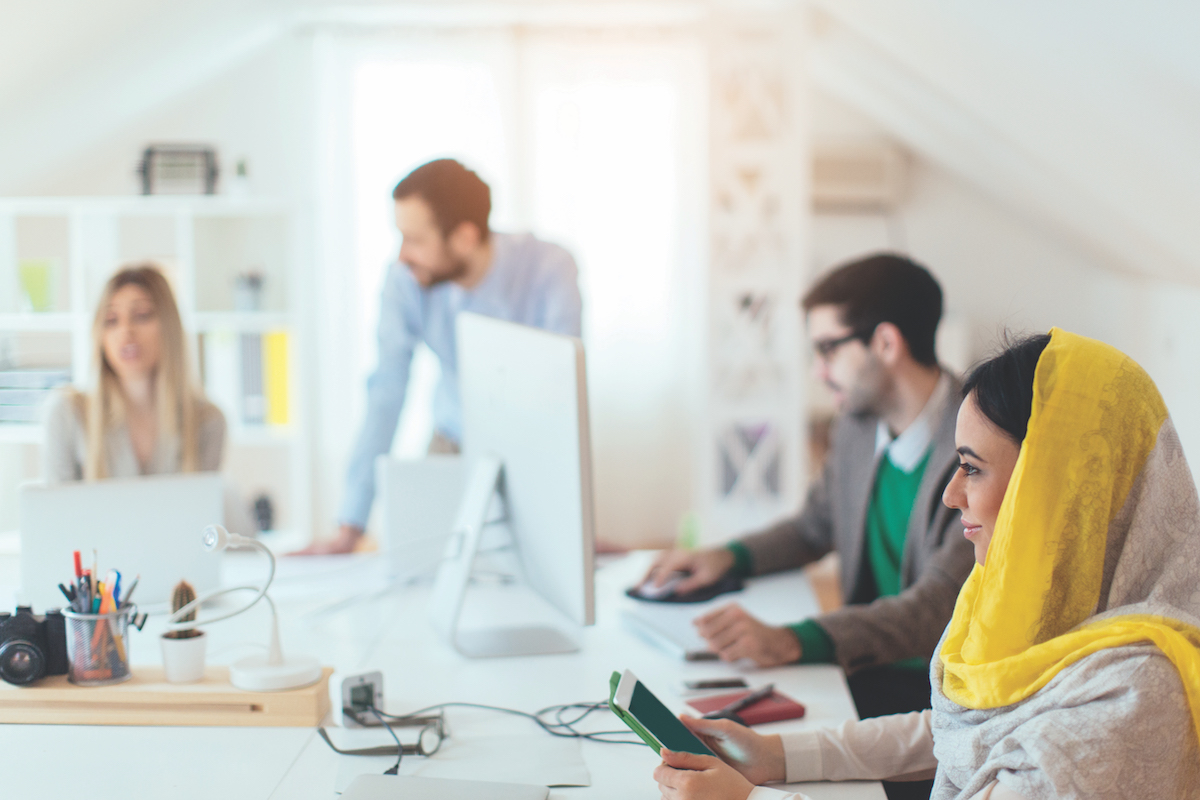 “We are helping leading hotel chains in Spain to truly personalise the guests’ ideal experience while ensuring there is no unnecessary plastic used as part of that. In Italy we’re transforming the manufacturing industry with connected manufacturing and predictive quality to ensure zero waste and the best quality for customers.

And then you have markets in Central Africa where you have to work from scratch and think about selling an advanced digital solution to people who quite possibly may not have electricity 24 hours a day,” he continues.

Yet, it’s often these latter markets that provide the most rewarding outcomes. “One of the most fascinating projects we’ve done was in West Africa, where we helped millions of people living in places where there were no banks to have access to a bank account using their mobile phones. We actually converted small corner stores into physical ATM hotspots,” Steve says.

“Other than the beautiful transformation projects, digitalisation and innovation you’d expect SAP to bring to these customers, we also do some projects that are fascinating and transform markets on a large scale.” 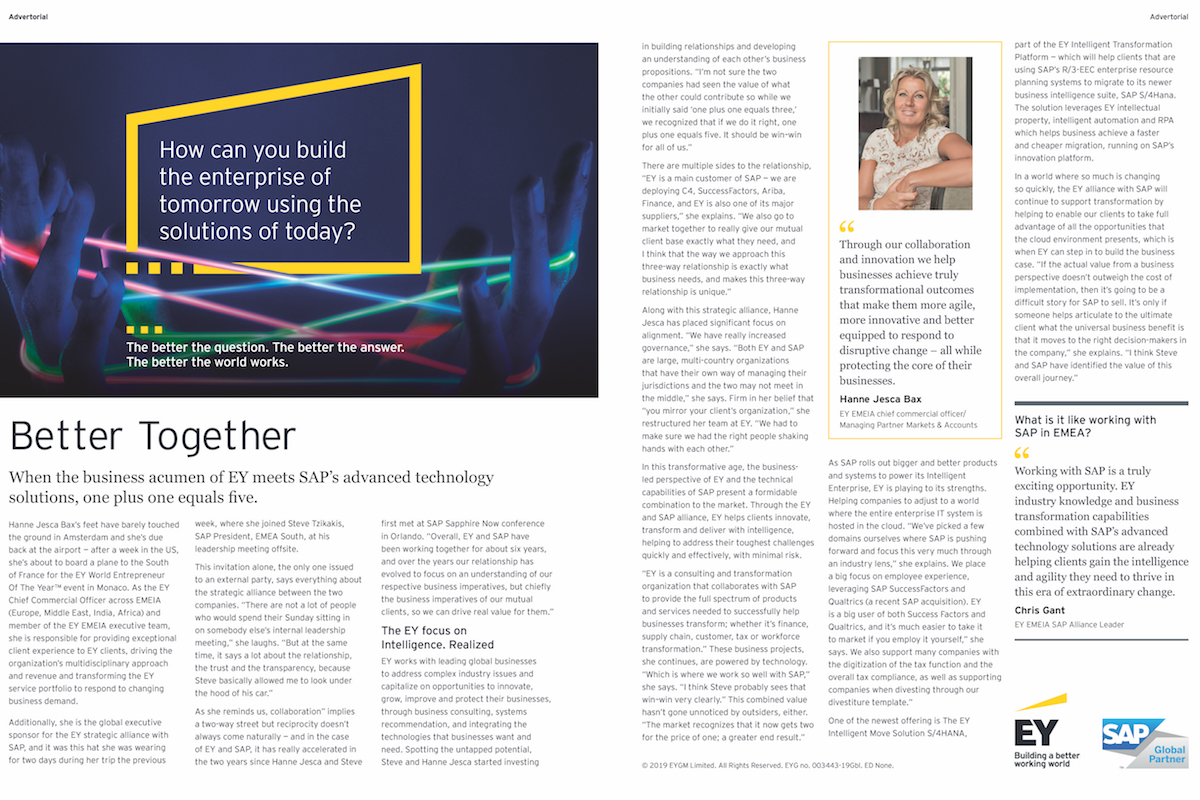 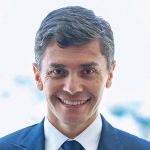