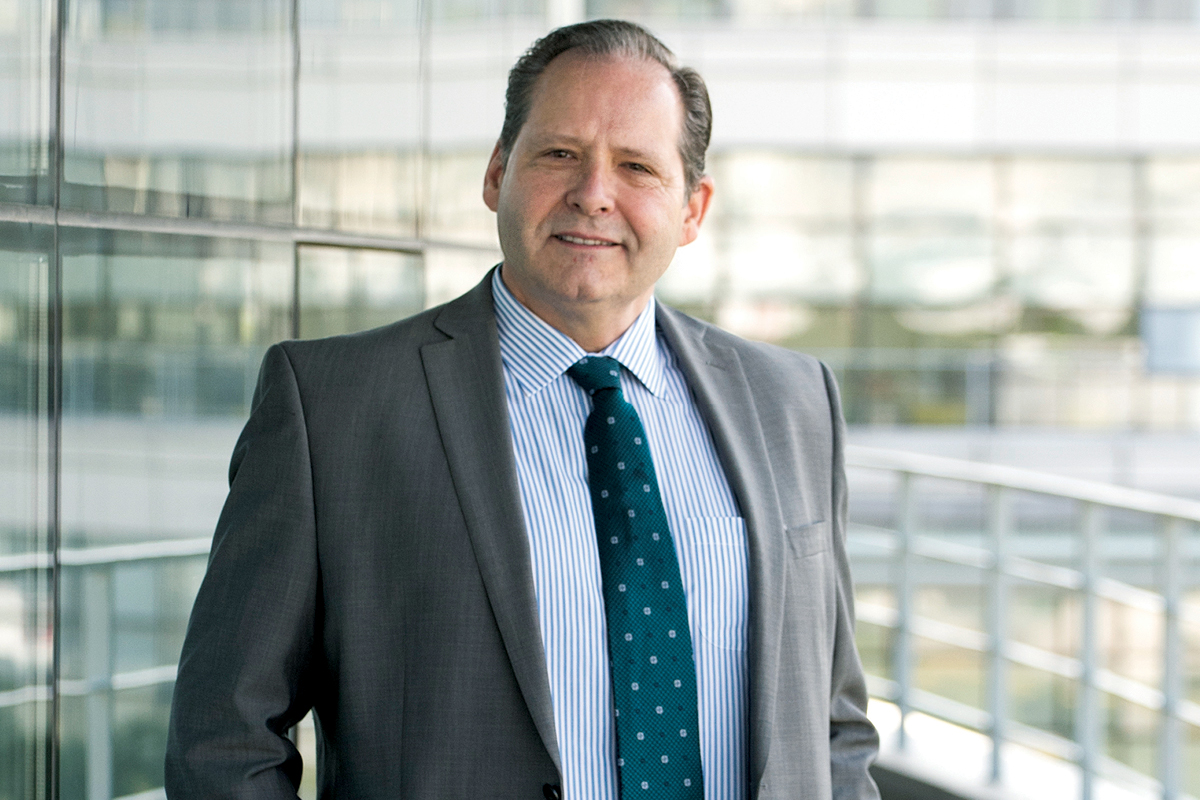 One of the most influential, competitive and fast-evolving industries in the world, the automotive market, is experiencing immense technological disruption. Since the creation of the first true automobile in 1885, vehicle manufacturers have come and gone and cars have become vital social commodities promising freedom and connection.

According to Kevin Quinlan, Senior Vice President and General Manager of Electrification and Electronics at Delphi Technologies, and recent research from PwC, the future of mobility will be electrified, autonomous, flexible, sustainable and connected.

“My advice for others in the automotive industry is not to fear it, even though it’s being completely ripped up,” he notes. “Former US President Barack Obama was absolutely right when he said, ‘We don’t fear the future – we shape it.’

“If this industry has taught me one thing, it’s that if your goals don’t scare you, you’re not aiming high enough. Nothing great happens in your comfort zone. To achieve greatness, you need to get uncomfortable and always push the envelope.”

With deep automotive and technological roots dating back to the manufacture of the first electric doorbell in 1888, Delphi Technologies is a new company with an old history.

A spin-off in the 1990s from automobile giant General Motors, Delphi Automotive split into Aptiv and Delphi Technologies in December 2017, detaching its powertrain and aftermarket-related businesses to form a standalone company. 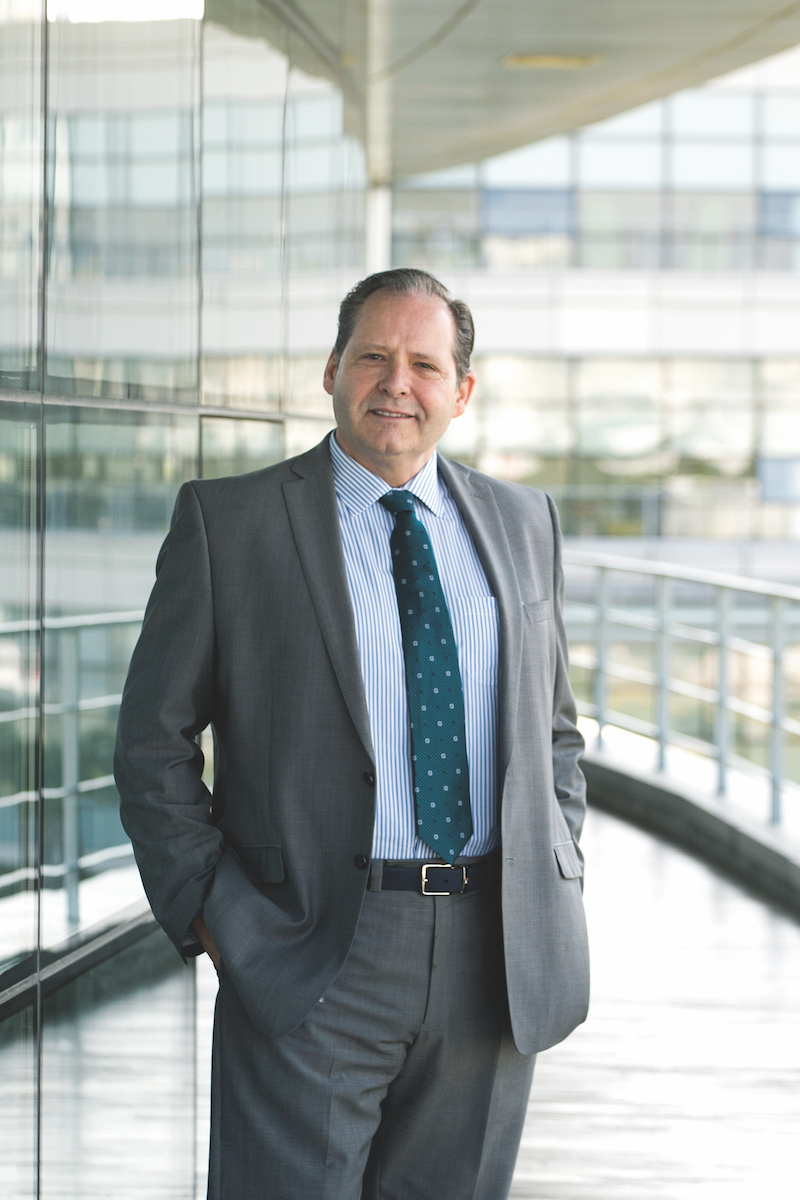 Strengthened by the past

As global pressures rise around safety, connectivity and sustainability and government regulations tighten around fuel efficiency and emissions reductions, Delphi Technologies promises to be a partner capable of moving faster than the pace of change.

“We specialise in gasoline and diesel technology as well as electrification, so any kind of powertrain that an OEM might want to utilise, we have the technology ready to go. Each OEM has a different CO2 problem to resolve. Companies like Volkswagen and General Motors have large fleets made up of small compact vehicles as well as large SUVs, so their CO2 problem is going to be different from that of a company like Daimler or BMW,” Kevin explains.

“Because we have the ability to resolve CO2 problems at many different levels with gasoline, diesel, electrification and hybrids, we can offer the OEMs
a personalised solution that fits their specific needs and requirements.”

Since joining Delphi Corporation in 1998, the Canadian has worked in the US, the UK, Germany and China, across a range of different product lines and entities.

“Delphi Automotive was a spin-off of General Motors so the greatest challenge for us was to try and create a new firm from what had been a components company,” he explains.

“We restructured everything and focused on new customers, products and portfolios. After the spin-off from GM in the 1990s and later the split to Aptiv and Delphi Technologies in 2017, we narrowed our focus to develop green technology that will help reduce CO2 emissions around the world through diesel engine technology, gasoline engine technology and electrified vehicles.”

Kevin explains that Delphi is divided into hydraulics and electronics and he is globally responsible for the latter. “We saw that electrification was primarily being led by China so we decided to headquarter our global electrics division in Shanghai.

On the other hand, our hydraulics division is headquartered in Europe with the idea that as diesel engines decline in the European market, we’ll be able to easily upscale our gasoline direct injection (GDI) business on a local level.”

“Shortly after I took over the electrification and electronics business unit in 2016, we booked US$1.6 billion in lifetime contracts, followed by another US$2.5 billion in 2017 and around US$4.8 billion last year. The growth is promising and we expect to see revenue of more than US$1 billion this year for the business unit. But right now, our technical value proposition relies on our leadership team’s ability to deliver the best. We’re very excited for the future.” 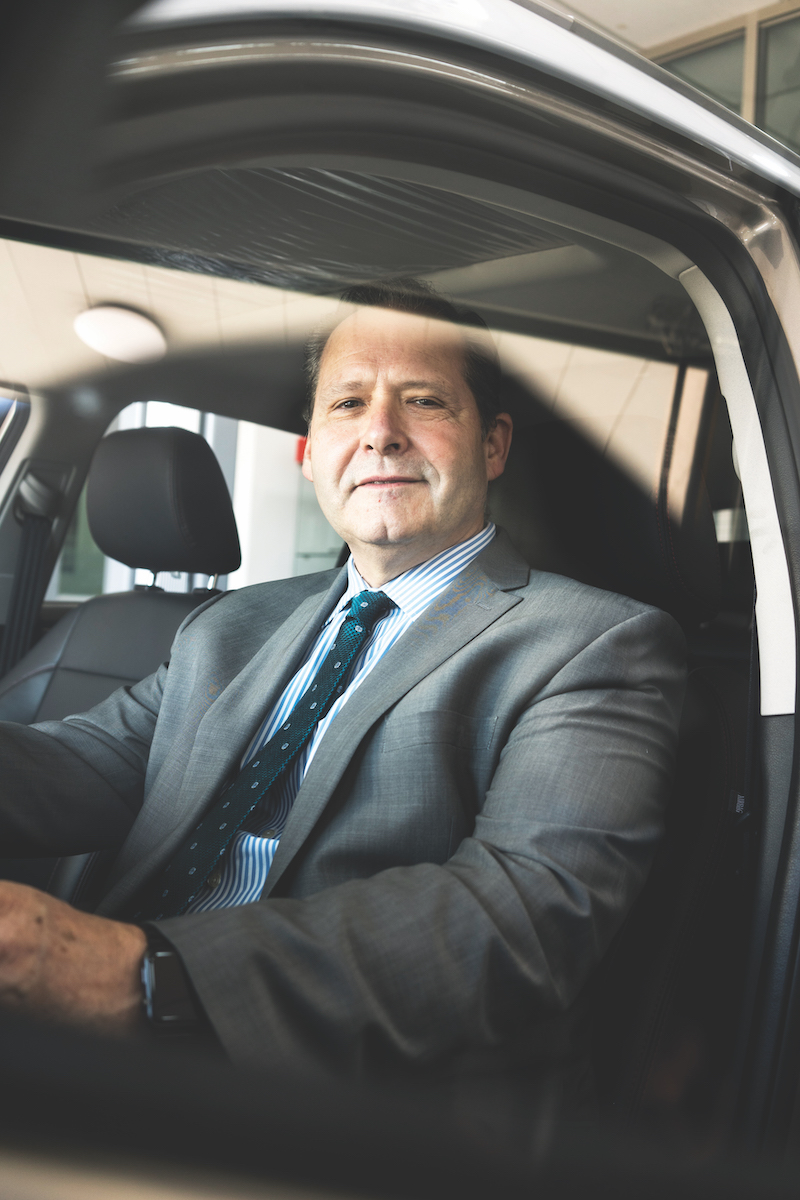 Kevin explains that Delphi’s main thrust is centered around three distinct trends in China, Europe and America that continue to drive business growth.

“The first is electrification, which is the biggest global trend of our time. We’re involved in this new sector through our GDI technology, which involves replacing diesel engines with turbocharged engines to help OEMs hit their CO2 targets. On the other end of the spectrum, the global commercial vehicle market is still growing at a rate of around 2%.”

However, Kevin says the market is now facing higher standards as legislation is put in place in specific cities to encourage OEMs to commit to greater levels of electrification.

“Many forward-thinking cities now expect that when a new fleet of vehicles is introduced, the cars are quiet and non-polluting. Therefore, large commercial vehicle OEMs are now expected to electrify their fleets if they want entry into these cities in the future.”

“Many forward-thinking cities now expect that when a new fleet of vehicles is introduced, the cars are quiet and non-polluting.”

“China’s New Energy Vehicle (NEV) credit scheme mandates that 6–12% of the fleet be electrified to improve air quality, which is infamously bad in China,” Kevin notes.

“There’s also the issue of fossil fuel dependency. In China today, about 70% of its fossil fuels are imported. Not having a domestic source is a huge cause of inflation because fossil fuels are purchased in US dollars and there are concerns about air quality. So, we’ve been focused on the NEV credit scheme in China to help OEMs convert to that standard.”

In February 2018, Delphi Technologies took New Energy Vehicle (NEV) to the next level, with the launch of the first Combined Inverter and DC/DC Converter in the China market. For automakers, these components create a more efficient and cost-effective solution delivering higher power density, integrated in a smaller and lighter package.
NEV is China’s designation for plug-in electric vehicles eligible for public subsidies, and includes only battery electric vehicles and plug-in hybrid electric vehicles. According to Kevin Quinlan, this product’s ability to deliver more efficient future electric propulsion systems and meet the industry’s highest standards means that it has already attracted the attention of major automakers.

Kevin says a similar phenomenon is occurring in Europe, where about 48% of all engines run on diesel. “With the recent emissions scandals around diesel engines, many OEMs are switching to either GDI engines or to electrified vehicles. This presents a massive shift as diesel engines are disappearing and GDI and electric vehicles are emerging stronger in the market.”

“While America doesn’t share these stringent standards, American OEMs still have large market shares in China and Europe, so they need to follow those trends even though their legislation is different.” The road to automation

Kevin believes that fully autonomous vehicles are still a while away and he expects they will be largely concentrated in the world’s most advanced and populous regions rather than in rural areas.

According to him, Delphi’s intelligent driving software will be a key player in facilitating the transition to driverless vehicles.

“While we’re not working on trying to create fully autonomous vehicles, we are very focused on intelligent driving software, which I’d describe as somewhere between a fully autonomous vehicle and one driven by a human. Most industry professionals expect that as we move towards automation, there’s a semi-autonomous stage that we will cross. These vehicles are embedded with onboard computers that will help minimise CO2 emissions and help consumers save fuel.”

Kevin explains that a similar transition occurred in recent decades with the rise of cruise control. “Initially, it was something you controlled manually. The next stage saw it turn on and off by itself as your car approached another vehicle and now we’re seeing advanced lane changing software come into play.”

“The same process will occur as we move towards full autonomy and, at each stage, it’s essential that these vehicles are equipped with software that monitors and minimises CO2 emissions. We have some unique software and technical capabilities around intelligent driving that OEMs are seriously considering as a next step before full automation.”

Kevin anticipates that over the next 5–10 years, the global automotive industry will continue to see widespread bankruptcies and the formation of new alliances.

“As technology leaders, we need to be prepared to shape this future. The electrification and GDI trends are strong so that’s what we’re focusing on. We set internal targets to secure in excess of 10% of the market share. We are taking lifetime contracts each year for several billion US dollars, propelling our expected revenue to US$2.3 billion by 2023, with projected revenue in the years following to be even higher.”

To meet these aggressive targets, Kevin is focused on comprehensively serving specific customers and platforms to ensure Delphi’s engineering and development resources are used most efficiently.

“Companies such as Audi, Volkswagen and BMW are strongly supporting electrification efforts so we’re making large investments to help grow our market share,” he says.

“Under construction now are four plants in each region of the world and a new technology centre, to try to establish new footprints for the manufacturing of electronic components. These investments will add hundreds of millions of dollars in revenue in the coming years.” 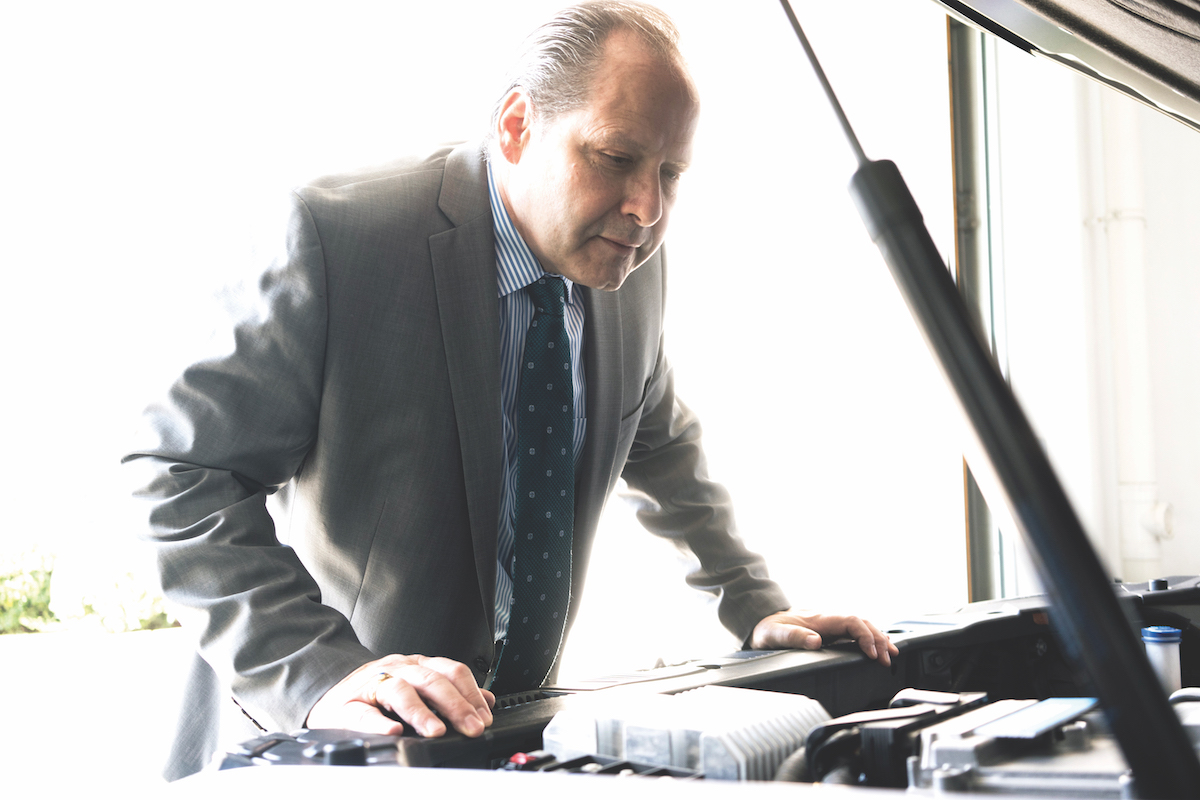 From General Motors to Delphi Automotive to Delphi Technologies, Kevin says the right culture was difficult to achieve.

“As an executive leadership team, we decided that we wanted to reshape the culture using some old and some new elements. Above all, we want a culture focused around the four pillars of transparency, inclusion, excellence and respect; or TIER. These pillars relate to every interaction we have with our staff, our industry and our customers.”

“Above all, we want a culture focused around the four pillars of transparency, inclusion, excellence and respect.”

Kevin has worked to ensure that every function within the business is geared towards becoming an industry leader. “We want our customers to see us as the kind of company that delivers excellent products on time and at the right price.

“In the business we’re in, we’re constantly innovating and we support this by investing in our engineering groups to create technical value propositions to resolve problems for OEMs and provide a good cost–benefit trade-off.”

To achieve this, Kevin believes the vision has to come from the top. “We push for every executive and every leader to take responsibility for their role in the business, the environment and in the community. We set high standards for ourselves and we never compromise when it comes to innovation and quality.”

“A good leader makes decisions and takes actions. You may be wrong or you may be right but, either way, you have to be willing to act.”

“I’ve never come across a leader that didn’t need the input of others, myself included. I don’t want to be the smartest person in every meeting, so it’s important to listen to my team to find out what’s working, what’s not, and what we need to change.”

“This is difficult for leaders because we all like to say that we delegate and motivate our people, but truly empowering people to make decisions and take calculated risks is a difficult thing to achieve in any organisation. And these aren’t wild risks, they’re risks that are thought through 100 per cent and if they’re successful, they can bring great value to the organisation.”

4. Willingness to be approachable

“We work in a high-pressure industry where we make hundred-million-dollar deals and we’re subject to cyclical returns. Nevertheless, as leaders, we need to maintain our approachability. I want my people to feel comfortable enough to tell me if something’s not working.”