“Forestry is a business of the future.”: Henrik Johansson Since he was a child, Henrik Johansson knew he wanted to work with things that move. His family ran a trucking company, so he was surrounded by vehicles and learned how they work and keep the world spinning.

“My dream was actually to design cars. I love sports cars. That’s why I decided to study mechanical engineering,” says Henrik, who now works as the Sweden Country Manager for forestry equipment company John Deere.

But Henrik’s education took him on a detour. After his studies, he spent two decades working in sales and management positions at various electronics supply companies before he got the chance to fulfil his dream of working with vehicles – not with sports cars but with harvesters and forwarders – machines that transport tonnes of forest products every day, accounting for between nine and 12% of the Swedish industry’s total employment, exports, sales and added value.

“I had no experience in forestry at all,” Henrik says. “What motivated me to start working with John Deere was the strength of its brand and my desire to somehow pivot from electronics to vehicles.”

But since taking his first job at John Deere in 2010 and being appointed Country Manager in 2016, Henrik has grown deeply invested in forestry, seeing it as a future business that must be preserved. “It’s our job to ensure that our customers are getting the most out of our machines,” he says.

“It’s our job to ensure that our customers are getting the most out of our machines.”

Shifting from electronics to forestry machines also meant joining a much larger business than Henrik had ever been a part of before. “I’m used to working in smaller organisations. John Deere is very big, with more than 70,000 people, so the organisation needs to have structure to operate efficiently. Sometimes, we can’t act as fast as I want to because of that structure,” he says.

On the other hand, he says, “Having these big owners behind us allows us to make big investments into service facilities and so on. This is the main thing that distinguishes us from our competitors. We have the best service network in Sweden.”

John Deere was founded in Illinois in 1837 and employs more than 74,000 people around the world.

But maintaining this extensive service network is a challenge in itself. Henrik has seen many of his service technicians grow older and retire after decades with the company. These experienced workers have not been easy to replace, especially by younger people, since there is a large shortage of technicians and mechanics.

One solution Henrik and his team have implemented is forging partnerships with forestry schools around Sweden, equipping them with John Deere products and ultimately using them as recruitment hubs. Moreover, once they recruit a new member “it’s really important to continue their training and always boost their competence beyond where they started”.

Forestry for the future

Henrik has high hopes for Sweden’s forestry industry. He applauds that the country plants more trees than it extracts and that forestry products are replacing plastic in an increasing number of ways.

“The machines have so many possibilities that can help the operators. It is an important task for us to train them to use the machines to their full potential,” he says. “Training is one of the ways in which we can help our customers to be more profitable and successful.”

In addition to training, innovative features of the machines can help the customers to achieve their goals. IBC – Intelligent Boom Control – is an important feature, which cuts out many of the steps a crane operator must go through to load a forwarder full of logs, thereby increasing productivity by up to 15%.

“It is also making it more attractive to work with John Deere forestry machines because the operators want to operate machines with IBC, and only we have it,” Henrik points out.

This is just a small part of Henrik’s larger ambition as Country Manager. “We need to somehow attract more people to work in the industry by convincing them that forestry is a business of the future, and working as a field technician in nature during summer or on a good winter’s day can be quite nice.” 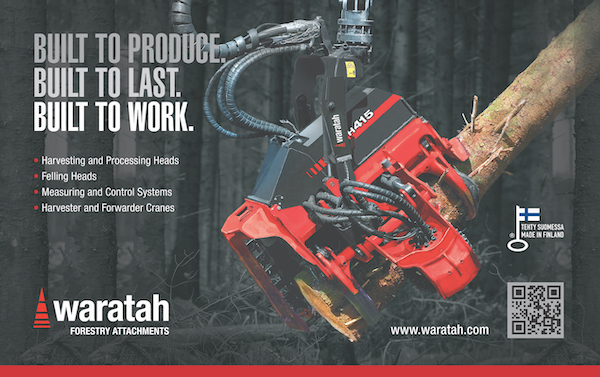