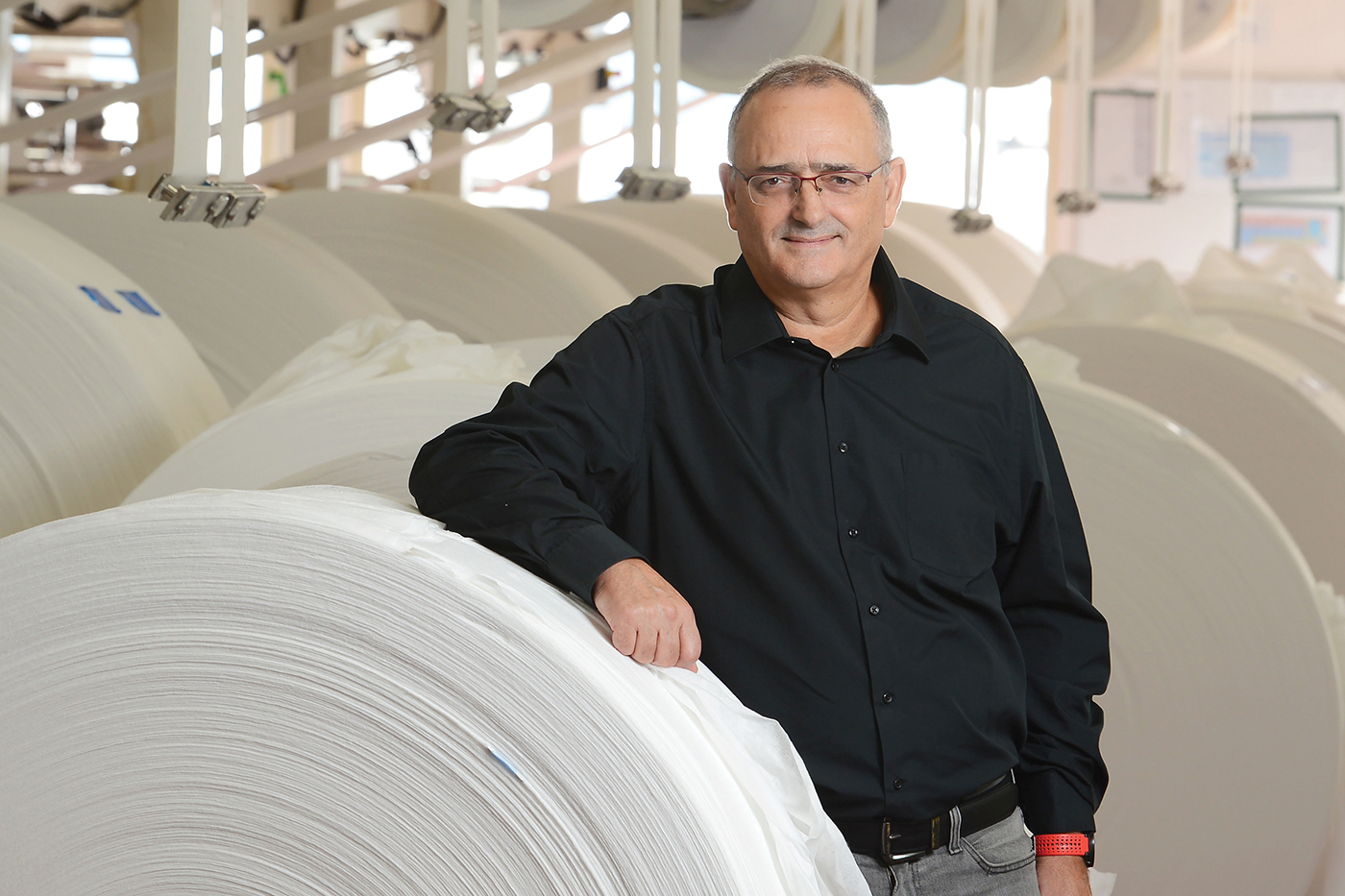 Last year, as demand for hand sanitiser and other cleanliness products exploded in response to the COVID-19 pandemic, traditional hygiene brands in the US were unable to produce enough to keep store shelves adequately stocked. Soon, a number of lesser-known brands ramped up production to fill the gaps.

At the time, Albaad – a publicly listed Israeli company founded in 1985 that makes wet wipes, feminine hygiene and other sanitary items – had never sold its products under its own brand names.

For years, the company had supplied numerous leading chains including Walmart, Target, CVS and Walgreens in the US, and Aldi and Lidl in Germany. Albaad also works with multinationals to produce branded products like Huggies, Nikol and Lily wipes for Kimberly-Clark in Israel and moist toilet paper for Cottonelle in Europe.

However, with established players unable to meet demand during the pandemic, the opportunity to sell under Albaad’s own brand seemed too good to pass up.

Thus, Safe & Soft antibacterial hand wipes and Cleanitize wet wipes were born. Safe & Soft was approved by the US Food and Drug Administration in August 2020, and in February 2021, the company received approval from the US Environmental Protection Agency to market Cleanitize wipes as 99.9% effective at killing the virus that causes COVID-19.

Albaad is now poised to benefit from a permanent change in consumer behaviour, with the public expected to remain more hygiene-conscious, even in a post-pandemic world. “The pandemic gave us a very strong win in terms of demand for wet wipes worldwide,” says CEO Dan Mesika. 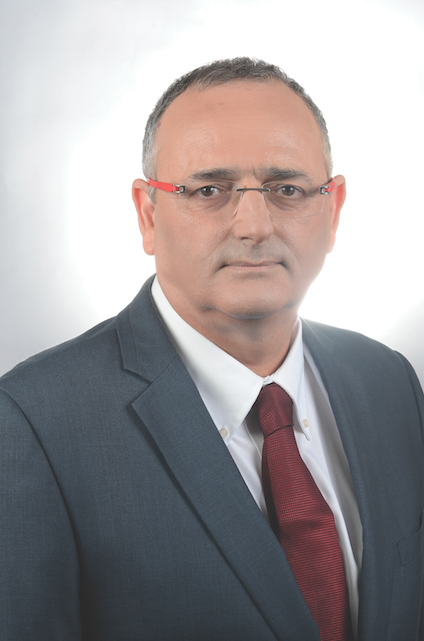 “We believe that will stay with us in the coming years; we’re expecting a positive market. We see a big opportunity, specifically in-house cleaning and antibacterial products.”

That opportunity comes on the back of a recent trend in the market that has seen a broadening of choices for consumers. “Over the past 10 years, the variety of wet wipes in the market has become much larger,” Dan reveals.

“In the past, the majority of the consumption of wet wipes was for baby wipes. Today, we see a lot of new categories like cosmetics. The wet wipes market has completely transformed.”

“We see opportunity for the company to grow in the US and in Europe,” Dan shares. Dan is well-equipped to help Albaad make the best of these global opportunities. His career has spanned several different countries and industries. He and his family spent six years in the US working in textiles. He later moved into chemicals, spending four years working for Israel’s Gadot Biochemical Industries, a job that involved regular visits to China. “I was able to get a lot of global experience,” he says.

Being vertically integrated supports our cost structure and supports the company to be able to bring innovation.

He has spent a total of 10 years at Albaad, starting with a stint between 2003 and 2004 as a project manager helping to establish the US operation in North Carolina. In 2007, Dan returned and served as CEO of Albaad US until 2010. He has been in his current role for six years.

The company was established in Israel by the Masu’ot Yitzhak Kibbutz, one of many such collectives traditionally based on agriculture that have since come to cover numerous areas of the private sector.

The kibbutz still owns 61% of the company, which has stayed true to the traditions of its founding shareholders. “People in the kibbutz are Orthodox, so we stop operations in Israel on Friday afternoon and resume production on Saturday evening,” Dan explains. “I like the company. I like the culture of the company.”

Part of Albaad’s vision is to cement its position among the leading manufacturers of feminine hygiene products and wet wipes for both private labels and leading brands, which involves becoming a leader in innovation.

Another key part of that vision is maintaining the highest possible standards of environmental responsibility and consumer health protection while providing consistent quality to customers. The company is one of the three largest producers of wipes in the world, with more than 1,500 employees and high-tech production facilities on three continents: in Israel, Europe and the US. 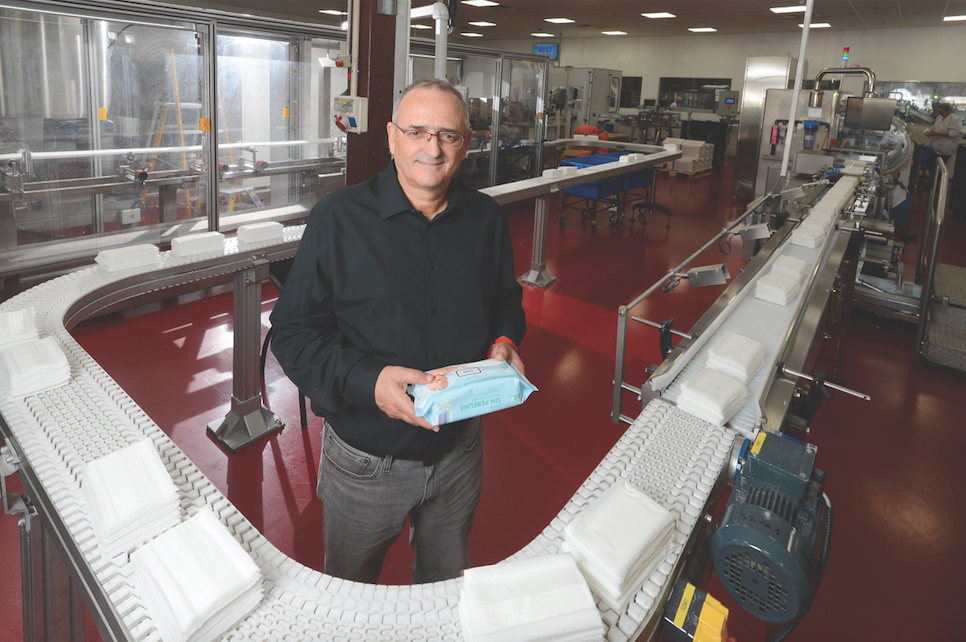 All the components of Albaad’s wipes are produced in-house, and there is a dedicated research and development team focused on delivering the products to world-class standards. In addition to antibacterial wipes, the company offers cosmetic options that contain emulsions with beneficial properties for the skin.

One thing that sets it apart from competitors is that it is the only manufacturer of wet wipes in the world that is vertically integrated – it has the capability to produce non-woven raw materials as well as end products.

“Being vertically integrated supports our cost structure and supports the company to be able to bring innovation,” Dan says.

“When you start to make the products from the fibres, through to the substrate, to the finished goods, that gives you the opportunity to look for innovation in different places. This is a really important thing.” Alongside that, the company’s global presence gives it an edge in logistical efficiency.

Dan is keenly aware of the fact that being a major producer of disposable hygiene products means Albaad must take responsibility for being sustainable and eco-friendly. “We are trying to develop formulations that are based more on natural ingredients, with fewer preservatives,” he confirms.

“We’re trying more to develop packaging materials that are recyclable, and we’ve built a new plant in the Negev Desert in the south of Israel that makes flushable paper for moist toilet tissue. This was a big investment that the company made – almost €60 million.”

The pandemic gave us a very strong win in terms of demand for wet wipes worldwide.

The plant is designed to produce tissues that pass numerous international standards for flushability, including those set by the UK, US and Canada. For Dan, having a lighter ecological footprint begins with integrating environmental considerations into every business decision and into the product development cycle.

These efforts are driven by a belief that sustainability is good for both growth and long-term shareholder value. Every new product the company develops is subjected to an assessment about its impact in terms of waste, which in turn, encourages innovation to ensure Albaad’s latest offerings are helping the company to reduce its impact on the environment.

Albaad has developed long-term strategic partnerships with its raw materials and machine suppliers, fostering cooperation between its in-house experts and those of the partner company to encourage innovation.

“It’s basically an effort by our engineering and R&D departments to open the doors for cooperation,” Dan asserts.

“Sometimes, companies are very reluctant to open their operations to machine producers because they want to keep their own secrets. But we choose to have a partnership that we think is better, to work very openly with the machine producer to develop and bring innovation to the way we are manufacturing the product.

“Usually, when we do this type of thing, we get an exclusivity agreement so that while we support the machinery producer to develop, they don’t introduce it to other companies for at least a year or something like that. We are always investing in technologies to improve efficiency in how we make our products.”

In that vein, Albaad has recently placed a greater focus on automation, which not only improves efficiency, but also alleviates a problem that Dan has encountered time after time in the industry.

“It’s becoming harder and harder to recruit people for industrial companies, so one of the things we’ve been doing in the last three to four years is investing in automation,” he says.

“We are trying this in the packaging area, which is the most labour-intensive part, to use automatic packing machines to pack the product. That’s helping us improve efficiency and also to solve the problem of making time to recruit people.”

Albaad’s most advanced automation process can be seen at its line in Israel. “We have a line there that is automated so that you load the machine with the rolls of the fabric, and it folds the product, weighs the product, packages it, puts it automatically in a box, and then the box goes directly to the container,” Dan says.

“We have an operator, but otherwise, there are no humans involved from the moment you load the rolls into the machine until you see a package of wipes going out to the customer.” Strategic partnerships are not just good for improving processes on the factory floor, Dan says. They also ensure that Albaad is positioned to capitalise on unexpected opportunities, like the chance it saw last year to enter the US market with its own brands.

“Last year was a good example, when there was a huge spike in demand in the marketplace. And because we had a good relationship with our supplier, we were able to react fast and get the raw materials quicker,” Dan explains, adding that the rapid response was made possible by a culture within Albaad of valuing suppliers.

“We are very loyal to our suppliers. It works both ways. You develop good and strong relationships with suppliers, and they’re very supportive when you have spikes of demand in the market, so you can react much faster.” 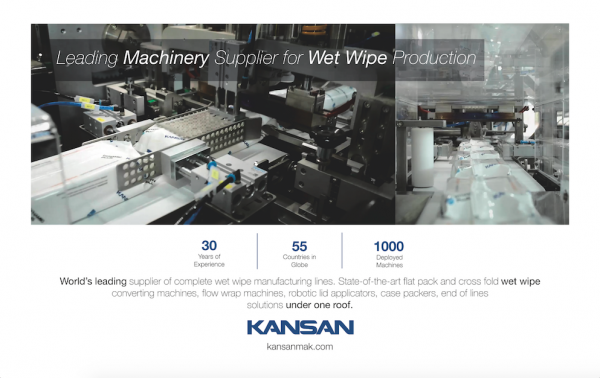 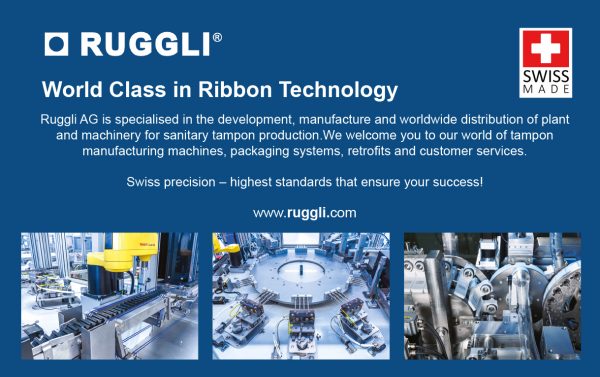 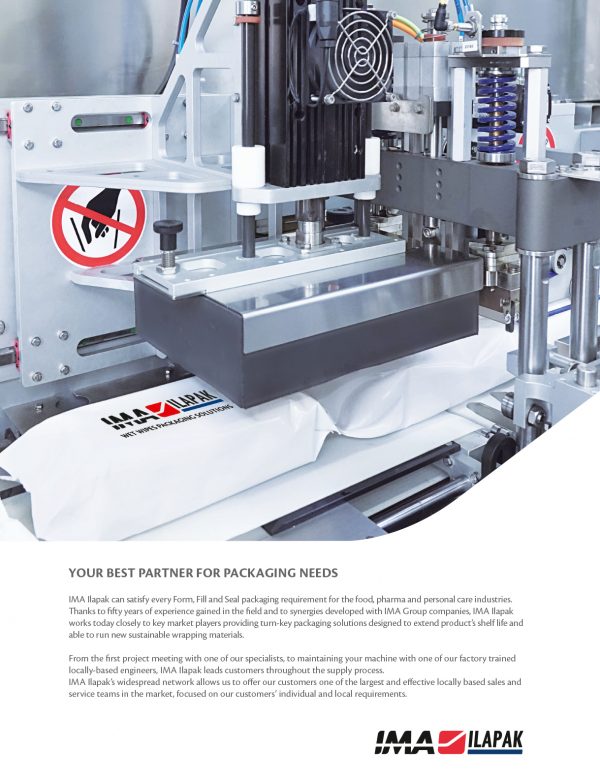