Gorenje may not be the biggest or most successful whitegoods business in the world, however President and CEO Franjo Bobinac believes it is one of the best. Focusing on efficient supply chains and innovations in design, Franjo has been able to capitalise on its economy of scale, even as bigger companies were going bankrupt.

Franjo has been with Gorenje for almost 28 years, spending most of his time in sales and marketing, as well as business strategy. “I started my career in Gorenje in 1986-87 as Deputy Export Director responsible for whitegoods,” Franjo says, “and I spent five years from 1993-98 as General Manager of our sales subsidiary that’s responsible for France, Belgium, Spain and Portugal, which was located in Paris. I was then invited to join the management board in 1998. I spent five years as Vice President for Sales and Marketing and then in 2003, when the CEO retired, I was elected as CEO.”

Right from the start, things grew rapidly as Franjo looked at the bigger picture and made key acquisitions.

“In 2005 we made the first acquisition abroad and that was when we started to be a truly international company,” Franjo says.

“We acquired the Czech producer of cookers Mora Moravia—it was an extremely successful company that was working for us—but we kept the brand name of Mora. The second acquisition was in 2008 when we acquired Atag, the premium Dutch whitegoods business, which had a 5 per cent market share in Holland. Then in 2010 we acquired Asko, the Swedish producer of dishwashers and washing machines. So this was a turning point for the group when we began to think more globally, with a portfolio of different subsidiaries, companies and brand names abroad.”

Another big turning point for Gorenje group came soon after their first acquisition, when Franjo also globalised Gorenje’s production. “In 2006 we made a greenfield investment in Valjevo, Serbia, where we built a cold appliance plant. Major internationalisation of production then followed in 2013 and 2014 when we managed to shift the production: from Finland to the Czech Republic, from Sweden to Slovenia, and from Slovenia to Serbia. Slovenia used to represent 100 per cent of our production and now it’s down to 60 per cent. It was not easy from the social perspective, nor from a strategic, supply chain or logistics perspective, but we managed to do it very smoothly and cleanly, so in the end it was worth it. In fact it was worth €20 million in savings.” 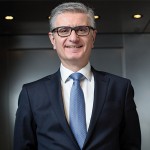