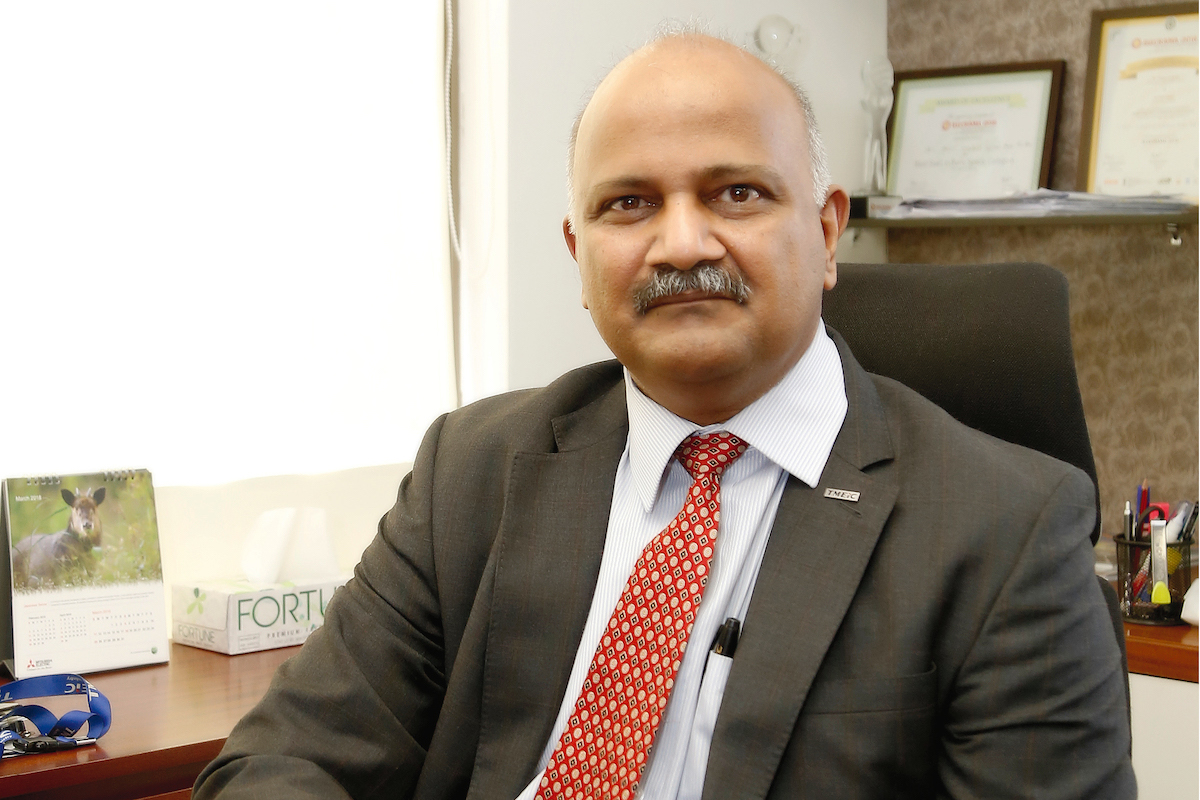 Take a scenic drive 80 kilometres north of Bangalore, through the southern Indian state of Karnataka, and you’ll come upon the small industrial city of Tumkur. It’s currently famous for a few things. An abundance of coconut trees. India’s first ‘mega food park’. And, of course, the requisite piece of ambitious architecture; the beautiful Globe library.

Tumkur is also one of the socalled ‘smart cities’ of India. And yet, if Hemant Joshi has any say, it will soon become the manufacturing hub of the country’s burgeoning renewables industry.

As Managing Director of the Indian division of TMEIC, a joint venture between Toshiba and Mitsubishi Electric, Hemant first came on board with the company 10 years ago, just as it was making a dramatic pivot. Relocating to Tumkur, he would oversee the construction of two new state-of-the-art factories.

Both were set up to service the robust growth in core sectors of the Indian economy. “Indian industry needed power generation, cement, metals and core infrastructure for water, irrigation and renewables,” Hemant recalls.

“This offered TMEIC the perfect opportunity to establish itself. But the real opportunity I saw was our ability to bring in high-value products and practices – technology, manufacturing process and reliability.” Not that a Japanese company setting up base in southern India didn’t bring its fair share of challenges – the biggest being developing a world-class supply chain.

“Not everything can be manufactured in-house. There’s a lot of sub-assembly work provided by external vendors,” he explains. “So developing our suppliers and training them up to TMEIC-quality standards took time. Nonetheless, it’s something we’ve poured significant investment into. And now, it’s paying off.”

Hemant is proud of the ‘halo effect’ his company has brought to the local economy. “As we engage ancillary industry as our sub-vendors and suppliers, they grow with us. They also get exposure to Japanese standards and quality, which enables them to enhance their own capabilities. This not only benefits TMEIC – it benefits India’s entire industry,” he says.

Blending the best of both worlds – Japanese quality with Indian ingenuity – became a compelling proposition for Hemant. “If you think about Japanese products, they’re renowned for their rigorous quality, right? It’s what makes them unique,” he shares.

“So from TMEIC’s perspective, it was vital that we applied that same rigour to our Indian manufacturing operations. The product line, the technology and the quality all remains the same. Yet, the problem was this is India, not Japan. One of the negatives of the Indian market is that it tends to be very singularly focused on low initial costs. The fact was, our customers had different needs. At the end of the day, you exist to serve them.”

Fortuitously, it was the market experience that Hemant brought to the table that finally shifted the dial. “I have a good understanding of not only what the Indian market needs but how it behaves,” he points out.

“That allowed me to formulate a strategy.” A twinkle comes to his eyes. “And so we rather cleverly reframed the problem and applied a little old-fashioned jugaad.”

As we engage ancillary industry … they grow with us. They also get exposure to our quality standards, which enables them to enhance their own capabilities.

Jugaad is a concept known to every Indian. The term is synonymous with an ingenious hack or innovative solution. While it made some folk in TMEIC’s head office in Tokyo a little nervous, they trusted Hemant to deliver.

“Jugaad became our secret weapon,” he grins. “Core Japanese technology at Indian cost. TMEICquality standards superimposed with local product innovation. Consequently, we became a lot more cost-competitive. And now, it’s what differentiates us from our competition.”

This merging of two value systems, Hemant believes, is already shifting the local market from being less obsessed with cost and more with value. “It makes sense, because we know TMEIC has a proven history of very high customer retention,” he reveals.

“People continually return for the reliability and longevity of their products. So our ultimate goal is to move the Indian market from a low-cost model to a value model. Happily, we’re seeing it start to happen.”

TMEIC was the first company in the world to develop a 1,000-kilowatt photovoltaic inverter, so perhaps it’s no surprise that with Hemant at the helm it has made serious inroads into the subcontinent’s booming new renewables sector. “A recent industry report lists us as the number one systems supplier for the renewables industry,” he shares.

“We provide all the energy grid connected inverters they need, and we’re striding alongside them by bringing in large uninterruptible power supply systems for IT infrastructure. Likewise, we’re seeing excellent growth in providing medium-voltage drives for industrial energysaving applications.” Hemant smiles. “We might not be leading there yet, but we’re definitely in the top two. Not bad for a company that’s only been in play for 10 years.” Not bad at all.