Even trademark German efficiency and invention is not immune to the innovator’s dilemma, something co-CEO Oliver Bludau has to constantly address if Berghoff Group is to stay relevant.

Even trademark German efficiency and invention is not immune to the innovator’s dilemma, something co-CEO Oliver Bludau has to constantly address if Berghoff Group is to stay relevant. 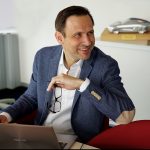 Often asked how he keeps German complex parts manufacturer Berghoff Group on top of the latest manufacturing trends, Oliver Bludau refers to a seminal book in business management from Harvard professor and businessman Clayton Christensen. Published in 1997, The Innovator’s Dilemma explores why outstanding companies can do everything right and successfully, yet still ultimately fail. The paradox of success is that the things that put organisations in leading positions are never the things that keep them there, the book suggests. Examples such as Kodak, Nokia, or Research in Motion with their Blackberry prove this all too well.

Oliver says every company should be wary of such a paradox potentially occurring in their own business. “The reason lies in the psychology of success. Organisations that have worked hard to gain a position at the top are praised and admired, are sure to have deciphered the secret of success, write high sales, and such,” says the Berghoff co-CEO.

“In short, don’t change anything. We’re doing everything right. Unfortunately, this run usually leads to a dead end, because while decision-makers pat themselves on the back every day, there are dozens of other companies that have only one goal – to disrupt the market and see it in a completely different context.”

Further complicating matters is the arrangement between Oliver and his co-CEO and stepfather, Ulrich Berghoff. Aware of the potential disasters stemming from an inability to separate the personal and professional from both sides of the relationship, Oliver insists his experience couldn’t be any further from that.

“Personally, we are so lucky that we are more best friends instead of having the typical father–son relationship. The experience is often that either the son wants to prove himself to this father or the father won’t let his son bring in his own ideas. This often leads to friction and a feeling of patriarchy – not good for business at all,” Oliver says.

“We are so lucky that we are more best friends instead of having the typical father–son relationship.”

“We trust each other deeply and are aligning on strategy and goals every single year, so we both know which direction the company is going. My father is responsible for all technical issues, while I take care of the economic agenda.” Perhaps in a nod to The Innovator’s Dilemma, Oliver remains proud of Berghoff’s innovation process – called ‘3-Step Vertical Integration Process’, or 3-SVI-P – as it is a business strategy that has kept the company relevant and ahead of the game.

The 3-SVI-Process combines highly technical expertise (step one) with the practical experience of the Berghoff Group from thousands of successful projects in the field of mechanical processing (step two) to create a wide range of applicable supplier ideas (step 3). As a supplier, Berghoff production specialists are constantly working on how to make its customers even more competitive.

“Berghoff is not a simple machining shop, but a supply chain manager with its own high-tech production,” explains Oliver. The process has been tried and tested over decades and still remains as effective as ever, he adds. “This is only possible in a long-term strategic partnership, because we can’t make this sort of effort for one-time projects.”

Berghoff is heading in two directions simultaneously: one concerning the customer value chain, the other concerning technology. Customer-wise, Oliver points to strengthening the company’s competencies in build-to-print, build-to-order and the assembly of complete modules. On the technology front, Berghoff is taking a closer look at the technology of additive manufacturing.

Since buying a half share of Berghoff after leaving his role at American Express in 2006, Oliver has overseen the company’s growth from 20 employees to more than 200, and from €2 million to €50 million in revenue. No longer a player just in the German market, the firm also has production plants in Switzerland and the US.

Ever the avid reader and academic, the Harvard Business School graduate continues to be shaped by professors Michael Tushman and Rohit Deshpande on how to create effective leadership. As Berghoff pushes to greater heights, Oliver also lives by some famous words from Austrian-born American management consultant, Peter Drucker. “Leadership is not rank or privileges, titles or money. Leadership is responsibility.”