The textile industry is hardly famous for its green credentials. Manufacturing clothes accounts for eight per cent of greenhouse gas emissions, with 92 million tonnes of worn-out garments tipped into landfill each year. By the end of the decade, the emissions will be 4.9 gigatonnes of carbon dioxide a year – the same output as the whole of the US. But an Austrian company is at the forefront of a major drive towards sustainability and has even set its sights on carbon neutrality, something unthinkable just a few years ago.

Lenzing is emerging as a major player on the international textile stage, partly because its customers are desperate to find ways to reduce their carbon footprints. The company’s wood-based fibres are sourced from sustainably managed forests and, unlike most clothes, are compostable and biodegradable.

In fact, Lenzing’s engineers have developed a unique upcycling technology, REFIBRA, which turns discarded fabrics into high-quality fibres so they can be used all over again. With 85 per cent of all old clothes dumped in the bin, it’s an important initiative.

The company’s transformation into a major international player is being driven by CEO Stefan Doboczky. He is very much aware that the major manufacturers have been slow in playing their part in combating climate change.

“Globally, the industry has huge challenges because, unlike steel, aluminium and paper, there’s no real sustainability,” he reflects. “Traditionally, there’s been no recycling, so big fashion brands have been under attack for the huge amount of waste that has to be dumped.”

The reason Stefan joined six years ago was that he could see Lenzing had been investing in the renewable space more than its competitors. It was no recent fad.

“When I looked at the technology portfolio, I was impressed that it was using renewable ingredients to make a material which naturally breaks down, with potential for ingredient branding, and I could see there was ample room for further innovation. And it’s been pushing boundaries for a long time. Twenty years ago, it was developing revolutionary new wastewater systems and emission reduction techniques way before others.”

Under Stefan’s leadership, the company’s momentum for environmental responsibility has increased, with some ambitious goals set for the next few years. “We’re the only company in our industry that’s committed to science-based targets,” he points out. “We’ll reduce our CO2 footprint by 40 per cent per tonne by the year 2024, and we aim to be carbon neutral by 2030, or 2050 at the very latest.” RISING TO THE CHALLENGE

Under Stefan’s leadership, Lenzing has rolled out a €2 billion global investment program, with major projects in Brazil and Thailand. When COVID-19 hit, it led to severe challenges and some unexpected solutions. “If somebody had told me 18 months ago that our staff wouldn’t be able to travel to these counties to supervise the operations, I’d have declared that the whole thing was impossible,” he says. “So when that actually happened, I was deeply impressed by how our people rose to the challenge. No-one should ever underestimate a well-performing team.”

Stefan has also set his 7,600 staff short-term targets for water consumption, waste management and educating suppliers about clean energy. Not to mention a strategic goal to more than triple 2020’s earnings to €800 million by 2024.

“There’s no other company that uses exclusively renewable raw materials,” Stefan says. “The only raw material we use is wood sourced responsibly from FSC or PEFC certified forests. In the future, we’ll run our own forest so we can live up to our high standards of sourcing.” It’s a stark contrast to polyester, which is made from oil and takes up to 200 years to biodegrade into harmful microplastics. Lenzing’s flagship brand is TENCEL, a soft, luxurious material made from cellulosic, breathable fibres. It’s long-lasting, retains colour and can be made into everything from denim and shoes to underwear and bedding. In September 2020, a huge milestone was reached when a carbon-neutral variety was launched.

“Protecting the environment is deeply rooted in our DNA, and also in Austrian culture,” Stefan explains. “It’s about being very close to nature and enjoying an outdoor life. Our headquarters is in one of the most beautiful places of Austria, on the shores of Lake Attersee. The water’s so pure you can actually drink it.”

A suitably unspoilt idyll for a company committed to cleaning up a whole industry. 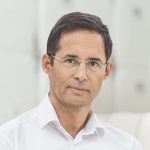