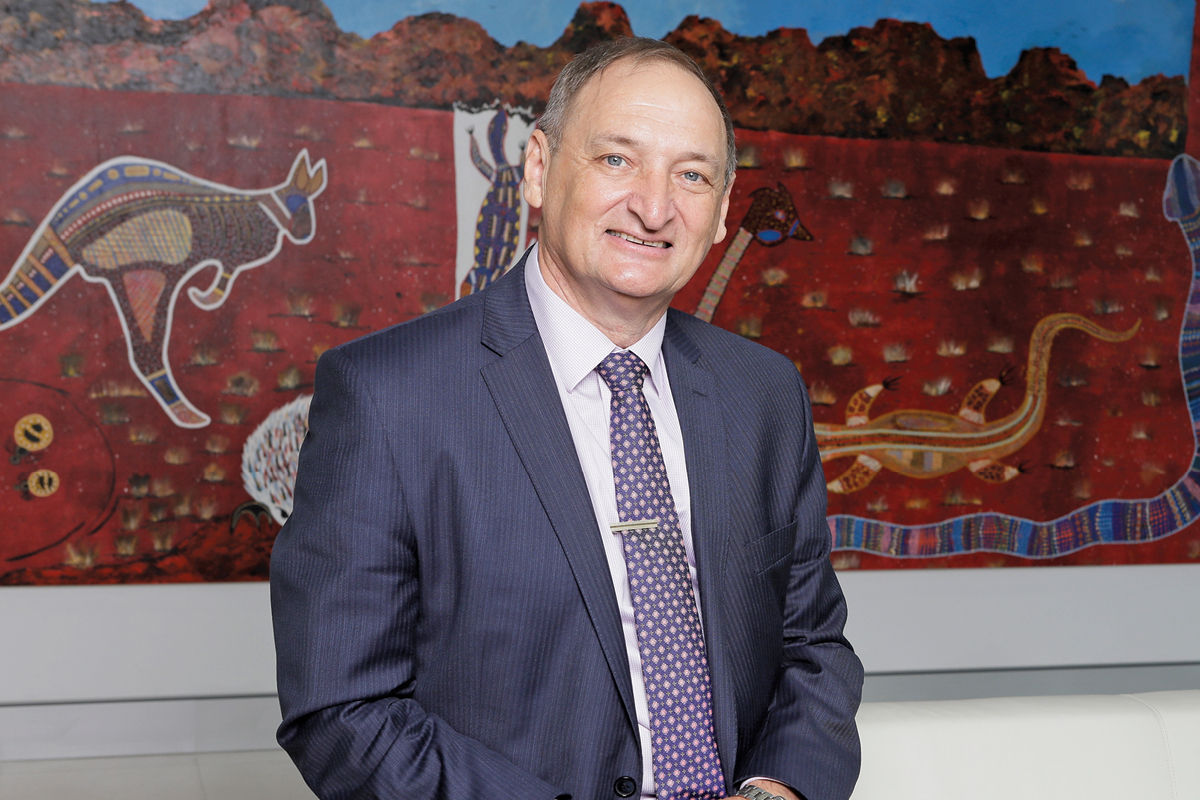 Talk of robotics and automation, and of how they will impact workforces is not uncommon conversation lately. But if there’s a place where a workforce needn’t feel afraid of the implications of this tech-forward future, it is – perhaps surprisingly given its industry – Western Australia-based mining company Roy Hill. The business has a strong legacy at its core, but it complements that with a long-running commitment to innovation and technology.

“Our chairman [Gina Rinehart] has always been a very strong advocate for technology, which we’ve kept at the fore when developing the business,” explains Roy Hill CEO Barry Fitzgerald. “In today’s marketplace, with the changes in the economy, robotics, Big Data – an incredibly futile and fast-moving area – that has positioned us well because we don’t have the legacy systems, but we do have an open mind. It sets us up well for the years to come.”

Barry is taking this approach and making sure that Roy Hill and its employees are future-proof. “We think the industry will rapidly change over the next 5 years,” he comments. “We are also having this discussion on futureproofing with our employees. We are making sure that they’re aware that society will change and that their work environment will change.

“We need to be a part of that conversation. It is also about helping our people on the journey, making sure they’re adapting and meeting the challenges, and prospering from the introduction of technology. While many may need to change their roles, I believe that if they face it with the right mindset, there will be many opportunities as well.”

Roy Hill is an iron ore mining, rail and port operation – the largest mining construction project ever undertaken in Australia – and it has an iconic name in Australian mining attached to it: Gina Rinehart.

The Roy Hill iron ore mine in Western Australia is majority owned by Mrs Rinehart’s Hancock Prospecting, a company which dates back to the early 50s when her late father first discovered the immense iron ore deposits in the remote Pilbara region. Roy Hill’s connection with such a legacy has given it a robust point of difference in its operations. “It gives us a unique background and a unique framework to be operating within Western Australia,” Barry says. 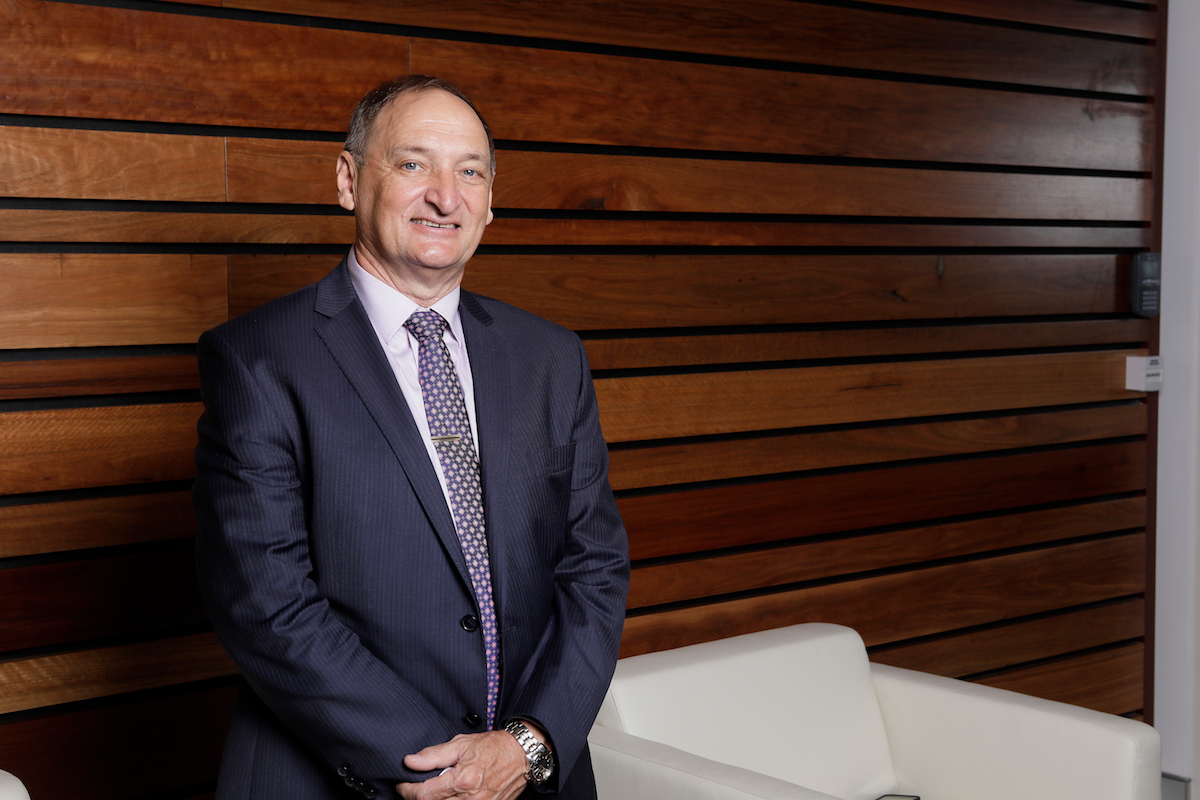 “We often talk about a sense of history, of Hancock legacy, and we also talk about the immense history of our partners in Marubeni Corporation, POSCO and China Steel Corporation because all of those, whether it be in the Chinese steel industry or the minerals industry, have got, in their own way, proud and strong traditions as well,” explains Barry.

Barry sits at the helm of Roy Hill, and was appointed as CEO in June 2012 after two years with the company. With a strong 30-year history of roles in the resources and engineering sectors at companies including Mt Newman Mining/BHP Iron Ore, Henry Walker, Simon Engineering, Roche, and as CEO of CITIC Pacific Mining, Barry is no stranger to the world of iron ore and the business of mining.

Of course, one of Roy Hill’s key drivers is ensuring cost-effectiveness, but the other focus is on being value-driven internally. Barry explains that it is all about the people. During its construction phase, Roy Hill undertook some 36 million hours of construction labour, most of which was through project-based hires or contractors.

What is important to us is having people with the right behaviours who are the right fit for our organisation.

Now in the ramp-up phase, the project is looking to the long term and to building the company culture while working on those value drivers. “What is important to us is having people with the right behaviours who are the right fit for our organisation – for example, people who are open-minded, collaborative, innovative and energetic.”

Barry is putting “a fair bit of effort” into finding these people. Roy Hill runs orientation nights for those who have no prior mining experience, with the aim of encouraging a more diverse workforce – including the inexperienced ‘greenies’, women (who already make up almost 20% of its workforce), and Indigenous Australians – with plans to increase to 2,000 full-time staff as the mine moves into full production. The fly-in fly-out rotation has also undergone a change, with a new roster that enables a better work–life balance.

“It’s an interesting evolution, when you go from a short-term, construction-type orientation into bringing people on for a longer-term position,” Barry notes. “We are not just building a project anymore; rather, we are building an organisation. We’re busy trying to create a culture, and we’re focusing on our values and behaviours to make sure we’re a value-driven organisation. This also comes back to the way we manage our teams. We set team goals, we set personal goals, we talk about behaviours – and that’s all important in terms of how we measure performance and reward our people. I think that it’s a really good thing.”

One of the most important behavioural aspects is delivering on safety, says Barry – not only physical safety, but personal safety too. The mine already has a track record of a high safety performance, something Barry is extremely proud of. “Our contractors deliver above the mining industry average. All those millions of hours of work have been injury-free, which is extremely rare in this field.”

To encourage women to join its workforce, and in support of the National Breast Cancer Foundation, Roy Hill has painted a fleet of its enormous trucks pink, and donated funds.

Among the causes adopted by the Roy Hill Community Foundation are education scholarships and hospital funding for non-invasive disease detection using 3D facial imaging – an example of technology breaking the barriers of distance for people living in remote parts of Australia.

Roy Hill’s ROC-ED program is part of the Year 8 curriculum and gives children an interactive insight into the world of mining from science, education and business perspectives.

With strong values in place, the company can then drive a positive environmental outcome which, Barry explains, leads to the drive towards other strategic objectives within the business, such as technology and innovation. In terms of the organisation as a whole, Barry says: “When you’re in a business that is facing technology changes, it’s very important to work with suppliers and the broader community.”

When you’re in a business that is facing technology changes, it’s very important to work with suppliers and the broader community.

Roy Hill was given an allocation of 55 million tonnes of iron ore for shipment, as stipulated by the Port Hedland Port Authority, and the company’s operating model was structured around that figure. Although it didn’t meet the target at the end of 2016 as planned, Barry communicates that Roy Hill has still achieved a record outcome for the industry, and that the initial aim was somewhat unrealistic. The lesson? “Audacious targets may not be achieved but are necessary to drive exceptional performance,” says the CEO.

Reflecting on the project to date, Barry notes there have been many highlights. “The willingness and the confidence of the owners to manage that risk and face the uncertainty of funding approval was significant,” he says, also noting that Roy Hill has been the fastest construction start-up of any major greenfield mine in Australia and has won numerous awards, including environmental.

It is continuing to ramp up its operations and is well on its way to becoming the single largest iron ore mine in Australia. It recently celebrated the shipment of 38 million tonnes of iron ore – the fastest mine to do so in Western Australia.