Dmitrij Ščuka describes how VITKOVICE STEEL has emerged from the global financial crisis as a leading European manufacturer of rolled-steel products.

Dmitrij Ščuka describes how VITKOVICE STEEL has emerged from the global financial crisis as a leading European manufacturer of rolled-steel products. 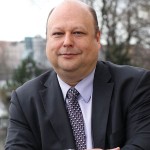 VITKOVICE STEEL is prospering in a tricky economic climate under the direction of CEO and chairman of the board Dmitrij Ščuka. For the past 12 months, Dmitrij has been leading his team in a positive direction, providing steel to the construction, shipping, and energy industries. Dmitrij spoke to The CEO Magazine about the challenging journey the business has been on after hitting its lowest point during the fiscal disaster of 2009 before clawing its way back to an enviable position in the market.

The CEO Magazine: Throughout your time with VITKOVICE STEEL, what have been the biggest challenges youve faced and how have you worked to overcome them?

Dmitrij: The biggest challenge was the financial situation the company was in when I joined. The company was losing money because the steel market was in a bad position at that time. This made my task even more complicated. In a contracting market the only thing you can do is cut costs, so this was the primary exercise. I think for a period of about five months in 2009, when the GFC hit, operations had to stop because we just couldnt sell the product. Then we started gradually coming back into the black numbers. I would say the key to success for a good CEO are two major things: one is to be able to build a good team by finding the right people for the job, and number two is to have the courage to make decisions, even unpopular and complicated ones.