A mine of dreams: Gavin Gao 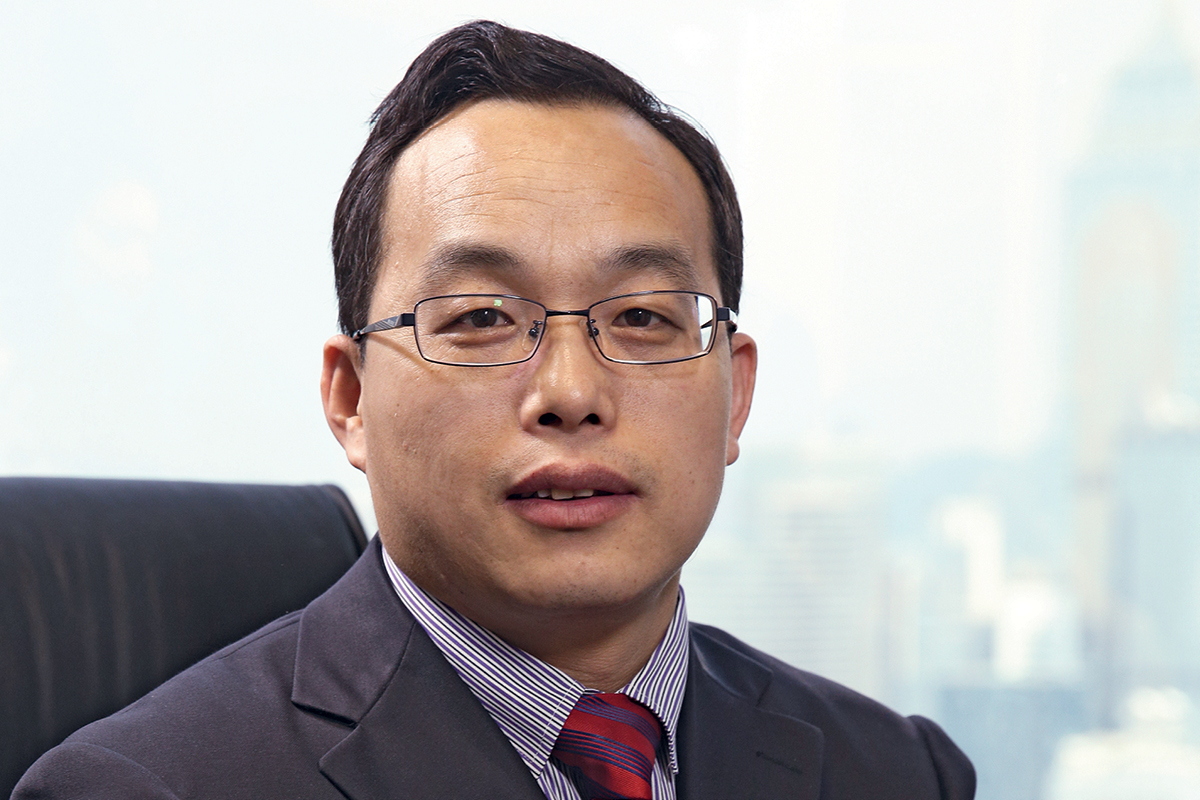 Gavin Gao credits advice given to him years ago for helping him make his best decisions – decisions that, although they didn’t always come easily, have capaciously expanded the global reach of China’s mining conglomerate, the Jinchuan Group.

While it undoubtedly takes a lot of courage to fearlessly take over companies, or at least fiercely compete for them, Gavin went ahead when others wouldn’t or simply gave up trying. “I was told to make project acquisitions boldly,” he recalls. “That’s what always motivates me to move ahead with a plan.”

Admittedly, the CEO of the group’s international arm, Jinchuan Group International Resources (JCI), has a quarter of a century of experience to draw upon. Armed with a Bachelor of Engineering, he launched his career with the Jinchuan Group as an intern, establishing very early on a personal agenda to make it to the top.

“I developed an ambition, a dream from the heart, to lead JCI. But to achieve that goal, I had to remain focused and down to earth, so I moved on to senior roles working in many different areas including financial management, international trade management, risk management, capital operation and being instrumental in group company share reform.

“I developed an ambition, a dream from the heart, to lead JCI. But to achieve that goal, I had to remain focused and down to earth.”

“Naturally, that 25 years of work experience within the company has taught me a lot, helping me to improve market sensitivity, industry research capability, financial analysis and valuation ability, team awareness, coordination and execution ability – all effective strategies contributing to becoming a leader.”

Gavin’s perseverance paid off when he was appointed CEO of the Hong Kong-listed company in August 2017. Although it was a role for which he was not only ultimately prepared but extensively qualified, he concedes it came with an enormous responsibility. More international resources were needed if the Jinchuan Group was to compete with other global juggernauts. The Jinchuan Group, a state-owned Chinese enterprise founded in the north-western province of Gansu in 1958, is a nonferrous mining conglomerate primarily engaged in mining, milling, smelting, chemical processing and further downstream processing.

It also engages in trading of mineral and metal products in complement to its mining operations. It is the third largest producer of nickel in the world, the fourth in the world for producing cobalt, the largest nickel-cobalt-platinum group metal production enterprise in China and the country’s third largest copper producer.

The rise of metorex

A new management team established after Jinchuan’s takeover of Metorex in 2011 has provided a successful platform for the Chinese conglomerate to operate in Africa. While Metorex has flourished since its founding in 1975, it has weathered several challenges including the global financial crisis, which hit in 2009 just as the Ruashi Project was nearing completion. However, the company’s focus on copper and cobalt over the past decade has resulted in continuing recovery and growth with cobalt production at Ruashi reaching a record tonnage in 2018.
The Musonoi Project is the latest operation featuring in Metorex’s portfolio. Described as the cobalt capital of the world, the Musonoi mine is on the northern outskirts of Kolwezi, the capital of the Lualaba Province in south DRC. It contains at least two mineralised zones, referred to as Dilala East and Dilala West, which were discovered as buried, high-grade copper and cobalt deposits in 2007.
After extensive drilling and evaluation, Metorex has declared a mineral resource of 44.7 million tonnes at a grade of 2.4% copper and 0.8% cobalt above an oxide cut-off grade of 3.2% copper equivalent, and a sulphide cut-off grade of 1.8% copper equivalent. The Feasibility Study completed in 2019 by ENFI considered the mining of the ore body down to a depth of 600 metres below surface. The ore body remains open at depth and along strike, and this potential will be targeted through further drilling and exploration campaigns in the coming years. Roughly 30,000 tonnes of copper and 4,800 tonnes of cobalt in concentrate will be produced annually once the mine comes into production in three to four years’ time.

“I was told to make project acquisitions boldly.”

However, over the past decade, there has been increased pressure for the company to acquire mining assets and projects overseas. Product demand from international markets was increasing and, with mineral deposits in Gansu exploited for more than 50 years, reserves were declining.

In 2008, Gavin was instrumental in the acquisition of Canada’s Tyler Resources, which was developing the Bahuerachi mine, Mexico’s fourth-largest deposit of base and precious metals. Strategies are now in place to find strategic investors to jointly develop the copper property.

From 2010 to 2015, Gavin drew on all of his accumulated experience to oversee multiple transitions for Jinchuan. He remembers the meticulous detail needed in negotiations to traverse legal minefields and ensure all risks were covered, including overseeing cost, international trading management, foreign exchange business and the equity division reform of the company.

He was at the forefront of negotiations in 2010 when the Jinchuan Group acquired the controlling stake in Macau Investment Holdings, renaming it Jinchuan Group International Resources. “With JCI listed in Hong Kong, we faced the challenge of working under a completely different system,” Gavin reflects. “The most important job of a listed company CEO is investor relations management, which needs to be directly accountable to shareholders and regulators.

“The biggest challenge has been compliance management, enhancing the company’s value and improving shareholder returns. I am very driven by achieving good returns to the market and our shareholders,” he says.

With substantial support from Jinchuan Group, the international arm was expanding its global mining resources development and operations with more than 2,800 employees in Africa and South-East Asia. The acquisition of Metorex gave JCI a number of large-scale high-quality copper and cobalt mines in Africa, and production engagement and trading of base metals.

The Ruashi Mine (75% owned by JCI), located in Lubumbashi in the Katanga Province of the Democratic Republic of the Congo (DRC), comprises three open-pit deposits and a processing plant producing copper cathode and cobalt hydroxide for direct sales to international markets.

The Chibuluma South Mine (85% owned), located in the Zambian area of the Central African Copperbelt, was established in 1955 and bought by Metorex in 1996. It’s comprised of an underground mine and a concentrator, producing copper concentrates for sale to Zambian smelters.

And the Kinsenda Mine (77% owned), also in Katanga near the border town of Kasumbalesa, is one of the world’s highest-grade copper deposits with a copper grade of 5.0% and an annual capacity of 24 kilotonnes of copper in concentrates.

Jinchuan also owns one constructing project, the Musonoi Project (75% owned) and one exploration project, the Lubembe project (77% owned) in the DRC, which serve as reliable resource protection for the company’s continued developments in the future.

By the end of June last year, Jinchuan Group’s direct investments reached US$2.1 billion, with assets worth US$5.7 billion and net assets worth US$2.5 billion. In the first half of the year, the company’s overseas revenue was US$3 billion.

Cobalt, found in the earth’s crust, is essential for the production of the most common types of lithium-ion batteries used to power electric cars. The hard, lustrous, silvery blue chemical element can form many compounds and be magnetised and alloyed with nickel and aluminium to produce powerful magnets, high-speed cutting tools and high-strength alloys for jet engines and gas turbines.
Generally obtained as a by-product of copper and nickel mining, 60% of the world’s cobalt supply is sourced in the Democratic Republic of Congo (DRC) with almost all of it manufactured into battery cells in China. The Jinchuan Group is the second largest producer of cobalt products for the battery market in China.
Along with lithium, nickel and manganese, cobalt makes up the metal oxide slurry of the battery cell’s cathode from which electricity is generated. The metal acts as the cathode stabiliser to help prevent batteries from overheating to ignite or explode.
Roughly 10 kilograms of cobalt is needed to produce an electric car, and with demand for electric vehicles expected to increase to 130 million by 2030 – along with more power grids relying on battery-based energy storage – it is predicted that in just five years’ time cobalt will be more coveted than oil.

Gavin says that innovative technology, along with creative management strategies, will ensure the company is on track to increase its annual production of nonferrous metals and new materials to two million tonnes from 1.5 million in 2018, and its chemical products to nearly five million tonnes, an increase from 4.26 million.

“I love my job because every day is a challenge.”

Gavin loves history, reflecting it “helps to understand reality”, and has never underestimated the impact the initial dreams of his early days at Jinchuan Group had on his motivation. But with a job that is all about looking forward, he rarely has time to look back and, today, finds getting out of the office and mingling with his teams is his greatest source of inspiration.

“I’m most productive on project sites,” he admits. “That’s where I’m brainstorming with colleagues, and that’s where the good ideas are produced. I like to fully mobilise the enthusiasm of my colleagues so we can focus on major issues as well as the key components of work that get us through each day.

“Am I a workaholic? I am addicted to working and I work more than 10 hours a day, so I guess so. I love my job because every day is a challenge.”