With 66,000 employees in more than 40 countries, Rio Tinto Chief Executive Sam Walsh knew that transforming the processes and culture of such a vast organisation would be a substantial challenge. Since taking the top job in January 2013, Sam has led the global mining giant with a focus on implementing and integrating efficient processes and procedures.

During this transformation, Sam has drawn on the expertise and experience that he amassed throughout his career with Rio Tinto. He joined the mining giant in 1991 after spending 20 years in the automotive industry at General Motors and Nissan Australia.

Today, as chief executive, Sam oversees the entire global network of Rio Tinto operations and says that he’s focusing on transforming the business following a $14-billion writedown of the value of some of the company’s assets in 2012. 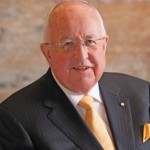