As a citizen of the world, Serafina Maiorano is well qualified to talk about Australian talent overseas, and indeed work passionately on their behalf. She has worked all around the world in the past twenty-five years, from the United Arab Emirates, Bahrain and Qatar, to Singapore, Italy, China, India, and the US.

Serafina is also a ‘diaspora’ herself. Her parents migrated to Adelaide from Italy as part of the post WWll exodus, and like so many other migrants they left everything they knew to make a better life for their family in Australia. Serafina and her brother were the first generation in their family to attend university.

Along with giving her a great education, Serafina acknowledges that her values in life were instilled in her by her family from a very young age: “Things like the importance of empathy, integrity and generosity, and to respect people for who they are and not what they do, were important to them,” she says.

“I have always been attracted to the notion of leading a life of meaning and making a positive contribution to the world. I believe that each of us has the innate ability to manifest our dreams into a reality. These personal values also shape my professional life. In essence I believe that collaboration, empathy, passion, courage, and generosity are invaluable leadership attributes. They are qualities everyone is capable of attaining. In Sheryl Sandberg’s words, the question is ‘What would you do, if you weren’t afraid?’”

Living these values and passions, Serafina’s career has taken her all over the world, helping people fulfill their ultimate potential on a global scale. As she explains, “I have always loved connecting people, skills, ideas, and organisations in the hope of creating partnerships that will ultimately serve a greater purpose,” she shares.

Her professional experience in global strategic thinking, planning, and creative consulting spans the public and private sectors, having come to Advance from an international leadership and HR consultancy in the Middle East. Prior to that she was an arts and cultural producer in Australia. She has brought all of that experience together into a role that suits her perfectly. Serafina describes Advance as, “the ‘smart grid’ of Australia’s human capital.”

Connections across the globe

Serafina is passionate about the efficacy of their combined abilities. “Australia’s greatest global resource is its diaspora, the 1 million Australians living and working overseas and Australian returnees, as well as the two-and-a-half million who were educated in Australia before returning to their own countries, mainly in Asia,” she says. “This global powerhouse, made up of many of our best and brightest, builds our global connectedness, driving innovation and sustainable long-term growth.

“With more than 40,000 high achieving individuals — 50 per cent women — across ninety countries, Advance acts as a series of virtual and physical networks and programs that aim to harness this global talent pool for the benefit of Australia, Australian companies, and its people.”

That half of the high achievers are female is important to Serafina; “When I was growing up there were few culturally diverse female role models in the public arena and in the media,” she says.
“I believe that you can become what you see, and have always supported the notion of growing an inclusive and open society that not only celebrates gender diversity, but also cultural and religious diversity.”

Mentoring Australia’s talented youth is another important strand to the work Advance do. A key program has been the Advance Innovation Program that has worked with 100 entrepreneurs from early stage start-ups to leverage Advance’s global networks. By building entrepreneurial skills, knowledge, and connections to Silicon Valley, more than 30 per cent have secured investment back home in Australia.

Serafina proudly explains the work Advance does in mentoring Australia’s leaders of tomorrow. “Advance has always had a focus on harnessing the imagination, expertise, and connectivity of our next generation of innovators, game changers, and thought leaders.”

“We achieve this in a number of ways, from supporting young Australians professionally when they arrive in a new global city, to mentoring university students in Australia in their final year of study. Our university students are mentored by our Advance Global Australian Award winners; individuals at the top of their field globally across numerous industries.”

To date, Advance has mentored more than forty Australian university students through their awards program. As an example, mentee Marita Cheng, 2012 Young Australian of the Year, had this to say about her mentorship:

“My mentor encouraged me to think globally and ambitiously right from the beginning. I’m now the Founder and CEO of 2Mar Robotics. We make robots to improve people’s lives. My mentor helped me avoid losing a lot of my money along the way, so that I am still able to research and design robots to manufacture every day.”

Advance has a number of great partners that makes their connections all the greater, such as the Australian Government, the CSIRO, and UTS; and also major corporates such as KPMG, ANZ, Dow Chemical, eftpos, and Macquarie. That Advance’s patron is the Prime Minister of Australia is an obvious endorsement of its impact.

Serafina cites an example of the scope these partnerships provide: “We were delighted to partner with Telstra recently on a series of thought leadership gatherings in Indonesia, China, Singapore, and Hong Kong examining how digital partnerships are crucial to business success in today’s world.”

Looking to the future, it is this digital and technological world that Serafina believes offers the greatest potential for her network.

“Technological change is transforming how we live, work, communicate, and pursue good ideas. We believe that it is critical for Australia’s prosperity that we harness the best entrepreneurial minds in Australia and around the world. Additionally, Australia’s growth hinges on global links that can be better harnessed to contribute to Australia’s innovation future.”

Closer to home, Advance is hosting its annual Advance Global Australian Awards and Summit at the Sydney Opera House and the Art Gallery of New South Wales on 21 October. It sounds like an interesting event: “From transport to publishing and accommodation to music, every industry under the sun has either recently gone through, or is on the brink of disruption. We’ll let you in on a little secret … Australians are often to be found at the centre of that disruption!” Disruptors will be in abundance at the Opera House, care of Advance.

Not surprisingly, Serafina loves her job. “I am humbled by the dedication, expertise, and generosity of the people I work with and meet on a daily basis, a global team of smart, entrepreneurial go-getters, some of the most strategic, generous and respected global Australian leaders, and a global community of extraordinarily talented and connected game changers, innovators, and thought leaders who all want to help grow a more progressive, bolder, and globally connected Australia.” 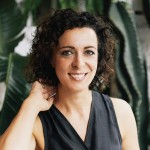