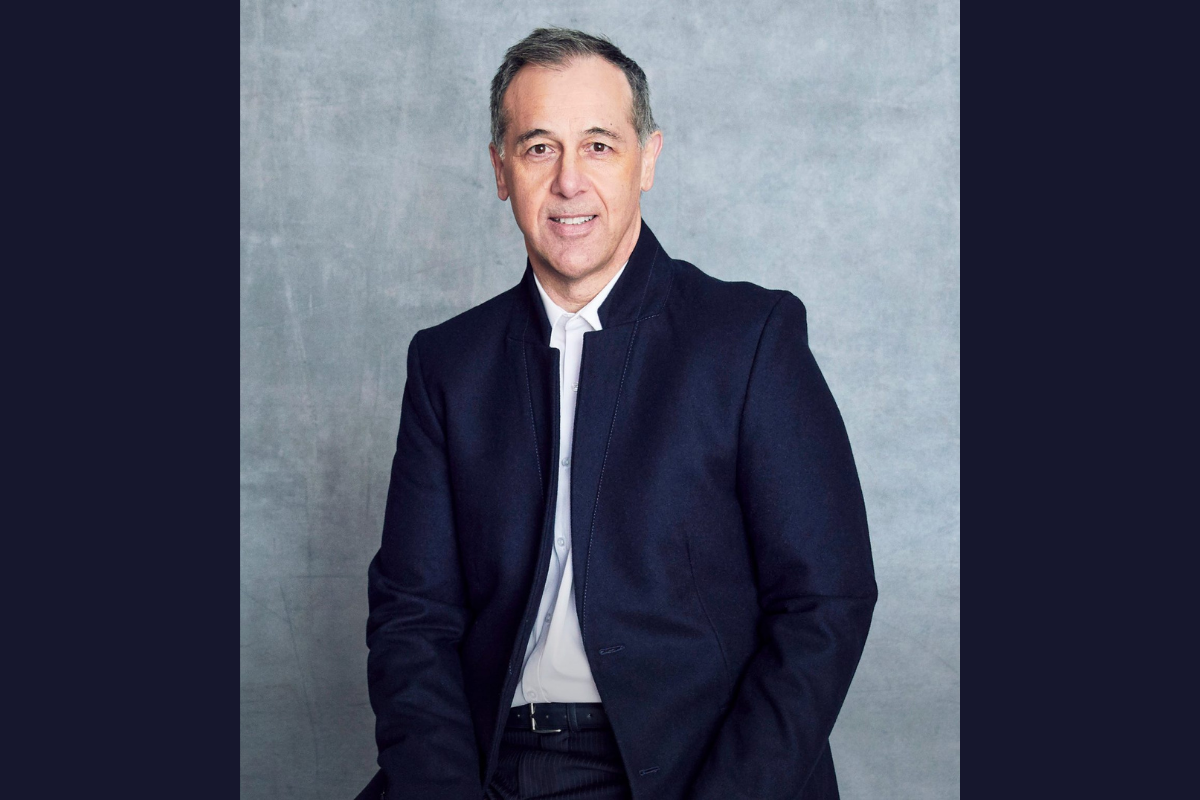 The grand opening of the David Jones department store in Sydney in 1938 was a huge spectacle. Around 100,000 people flocked to the multi-storey building, with its Hawkesbury sandstone facade curving around the corner of Castlereagh and Market streets, to roam its open-plan shop floors and climb its grand staircases.

The complex at the time was the height of modernity, offering a sleek, luxurious setting for shoppers seeking tailored menswear, luggage, sporting goods and more – and helping to put Sydney on the map as a high-end retail destination.

Shopping in the interwar years was a big occasion for many, and families would often make a day of it, donning their best clothes for the trip. The David Jones store was a destination, even putting on attractions to draw in larger crowds. At one point, the owners used a crane to move a Swedish Safir aeroplane into the boyswear section.

Today, although the David Jones store has long been closed to make way for its redevelopment, the historic building still stands in the city’s bustling CBD. But there have been some changes: rising above the art deco structure is a gleaming, soon-to-be-completed 22-storey tower, home to 98 luxury residences with sweeping views of Hyde Park and Sydney Harbour. 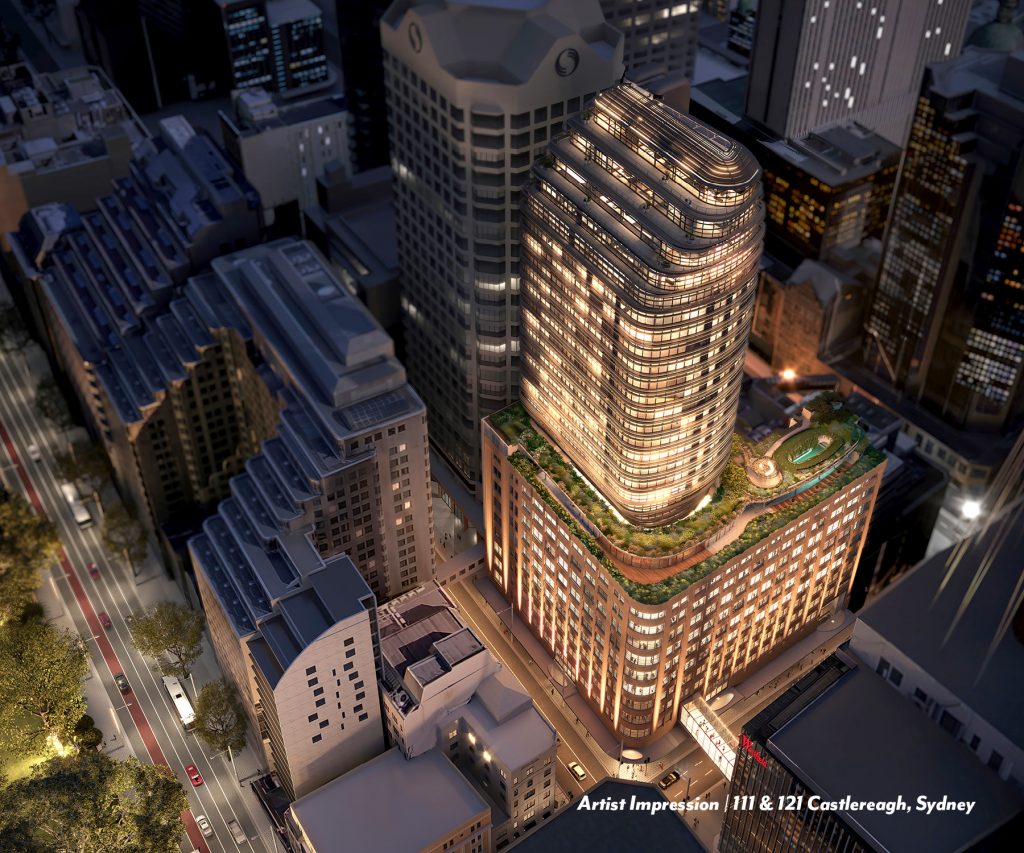 We try to be a tad different, and we always believe that heritage plays a part in everything we do. We like a challenge.

The new A$1 billion project, slated for completion by 2024, is the work of integrated property investor and developer Cbus Property, a firm that specialises in taking on challenging heritage projects and giving them a modern, luxurious twist.

“I don’t think any of the buildings that we’ve developed in the past 16 years have been cookie-cutter, to put it politely,” CEO Adrian Pozzo says. “They are all unique with their own design features and characteristics. We try to be a tad different and we always believe that heritage plays a part in everything we do. We like a challenge.”

Once finished, the 111 Castlereagh residential tower, which was designed by the architecture firm fjmtstudio, will offer residents something that Adrian says is unique even in a global city like Sydney.

There will be multi-level manicured gardens on top of the historic former David Jones building, wrapping around the base of the new tower and complementing a heated outdoor pool, which will be surrounded by lush greenery. 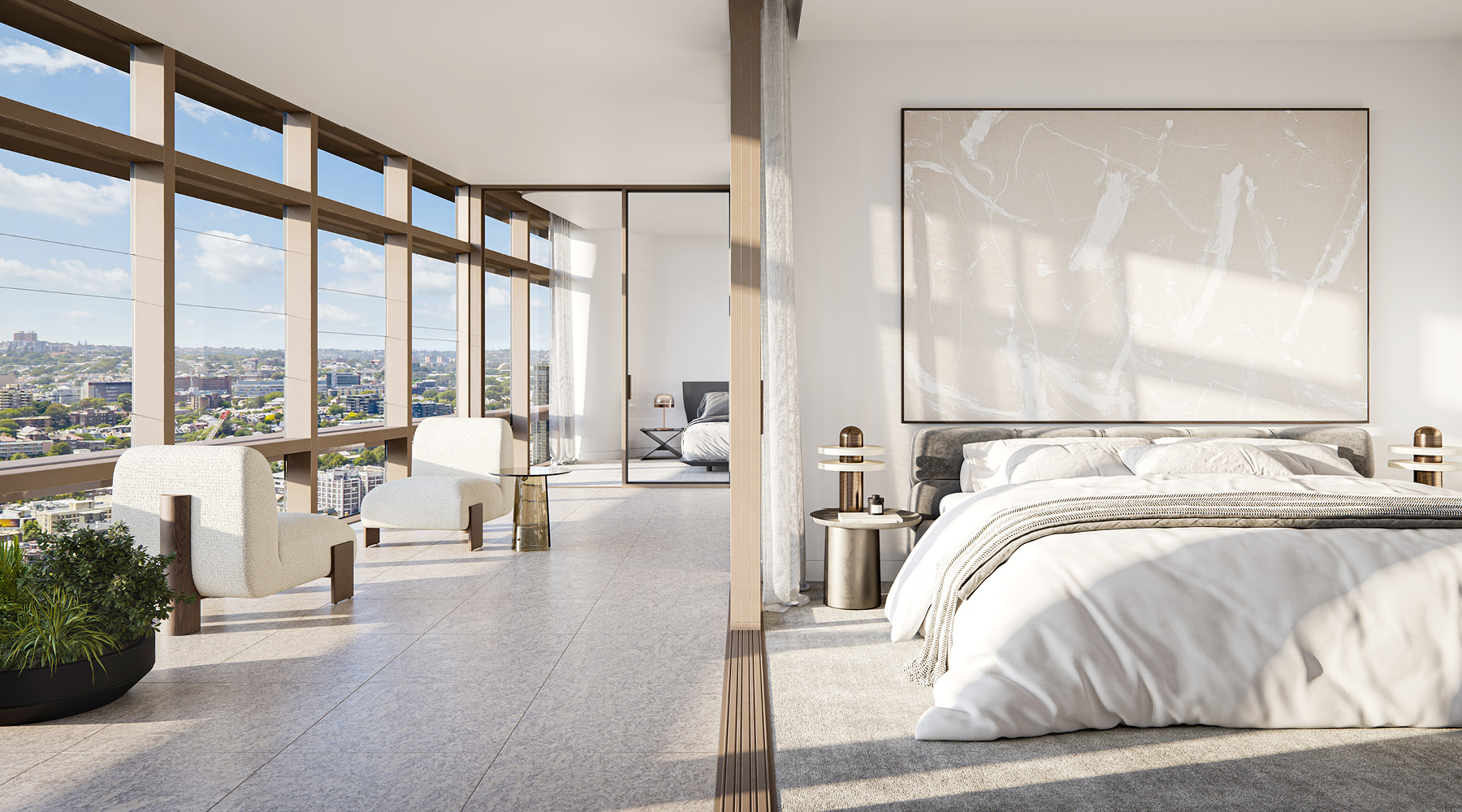 You would not work in any other industry because, I believe, you would never have the same levels of satisfaction as in this industry.

“The amenities are going to be second to none,” Adrian says. “We’ve got everything from rooftop gardens and a swimming pool to a private dining room and terraces. Yes, it will be unique all right, absolutely. You are living above a celebrated historic building. There aren’t too many opportunities to do that right in the heart of the CBD.”

So far, the majority of residences sold have been to locals looking for high quality in a boutique building. Adrian expects there to be overseas purchasers too, since the residences offer a particularly tempting living option for wealthy buyers with an international lifestyle.

Founded in 2006, Cbus Property is owned by the superfund Cbus, which has more than A$68 billion in assets under management. That institutional and financial clout has not only helped the company to grow and mature, but is also a source of motivation and pride for the builders who work on the projects, since they are also members of the superannuation fund.

“I think that connection makes a big difference in respect to what this business is when compared to others,” Adrian says. “They take great pride in their product, in what they build, and the product they build is there forever. They can show their kids and their grandkids what they have built. These developments are truly generational buildings.”

Adrian is just as passionate about Cbus Property’s projects as the workers who contribute their superannuation into the fund. “It’s the wow factor as it gets built,” he says. “You don’t realise the effort the workers put in. As the tower goes up, you think, ‘How on earth is this getting built?’ It’s an incredible industry. You would not work in any other industry because, I believe, you would never have the same levels of satisfaction as in this industry.”

It’s not just the scale of the projects that continues to impress Adrian, even 19 years after he joined the company. But completing a tower in three-to-four years is only possible after investing a similar amount of time before the builders even start work.

“You’ve got to go through the process of buying it, getting planning approvals, and so forth. Getting to the starting line takes you a good two-to-three years on its own,” Adrian says. “So you’re looking at a decent period of time before your final product is completed.” 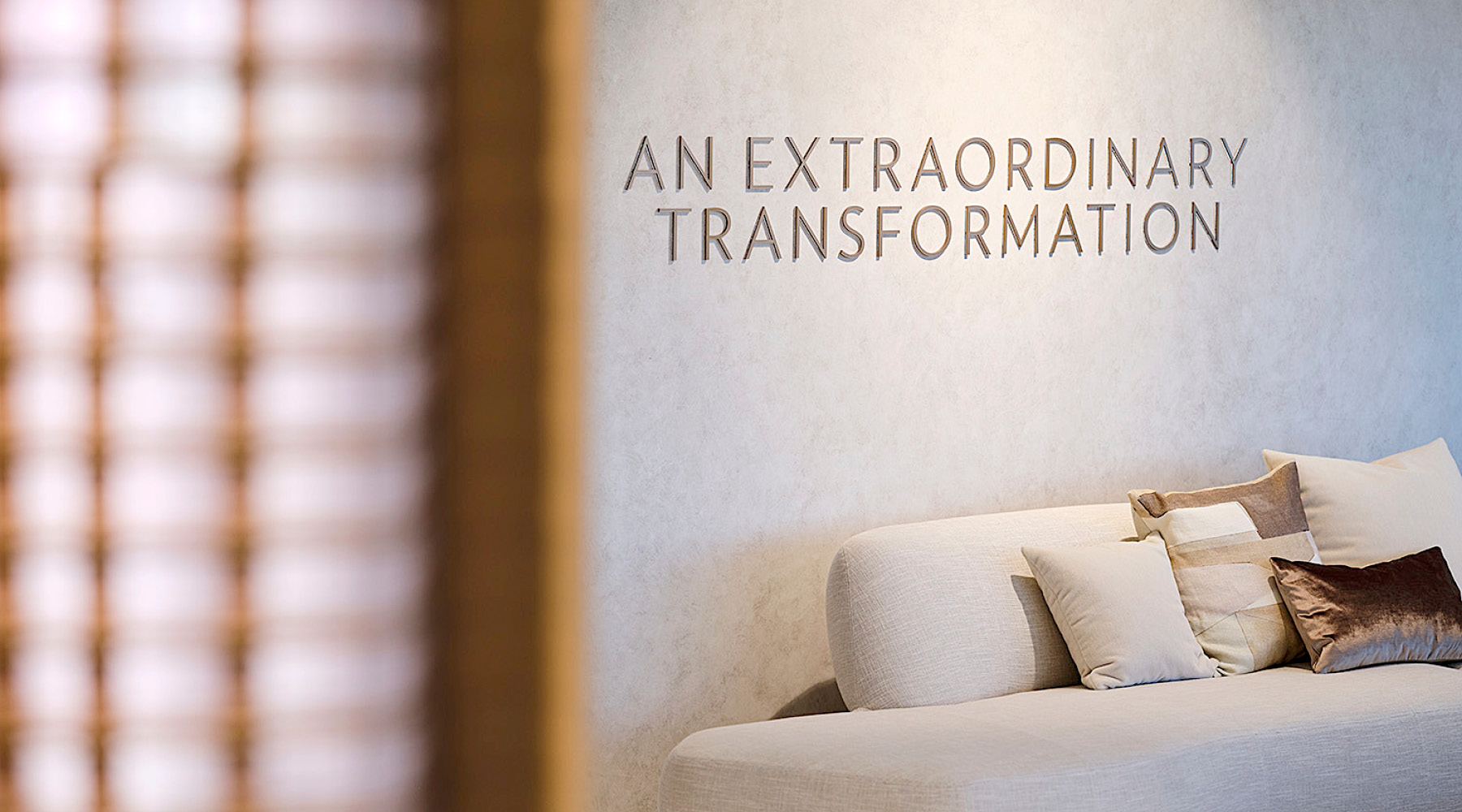 We have got everything from rooftop gardens and a swimming pool to a private dining room and terraces.

In his time in the industry, Adrian has also noticed a big improvement in the facilities that are being offered to commercial tenants. “Fifteen years ago, you didn’t talk about the bike rack or change facilities. Now if you look at the facilities in the buildings we have got, it is like a hotel.”

In an industry where people give so much for their jobs and work so hard, people tend to retire earlier than average, and in Australia, finding new talent to replace those who are hanging up their tool belts is becoming more difficult, Adrian says.

“It’s pretty tough in respect to the demand put on these workers,” he says. “If I talk to our parent company, retirement occurs between the ages of 55 and 60 for many. The majority have worked in the industry for many years.”

Adrian also sees fewer young people learning trades amid a greater emphasis on university degrees. “There used to be trade colleges, TAFE facilities, once upon a time. You used to be able to go and learn the trade,” he says. “Now it seems to be that you need a uni degree for everything. And I think we’re not bringing up the next generation of construction workers and other trades, which is a sad indictment on our society because you need the electricians, you need the plumbers, you need the chippies, you need all of those different trades. 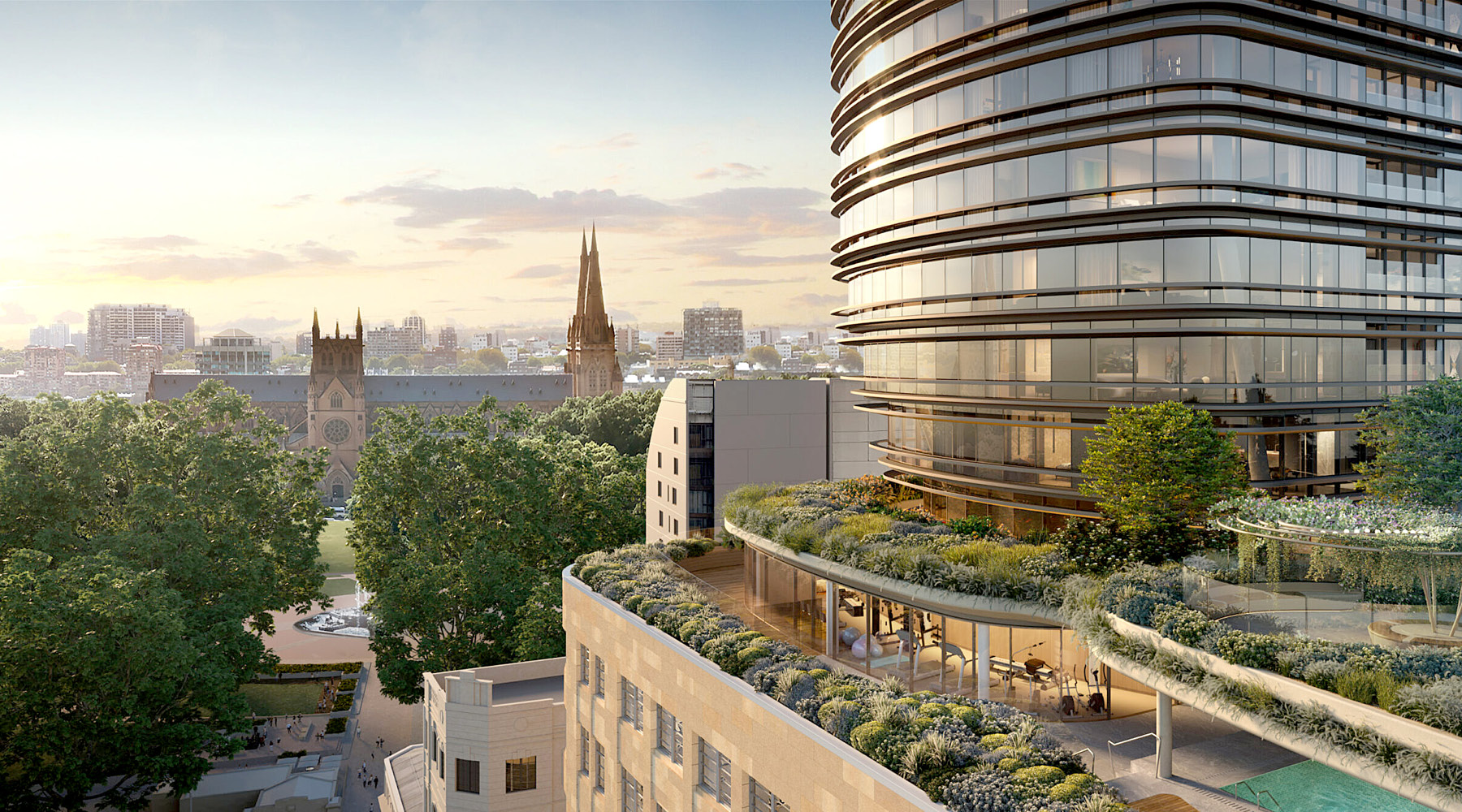 “Not everyone wants to be a scholar and we need to get them into the industry pretty quickly, but there is just not a lot of incentive to get young people into trades now.”

Another barrier preventing young people from entering the trades is the increasing pace of building projects. Amid demands for developments to be completed faster, there is less time to train people on the job.

“In this industry, unfortunately, we are attempting to deliver at such a fast pace that I don’t think it allows time for kids to train onsite and learn as they go,” Adrian says. “We’re missing out on that educational experience.”

Cbus Property is able to accomplish flagship projects like 111 Castlereagh thanks to the support of a range of industry partners. 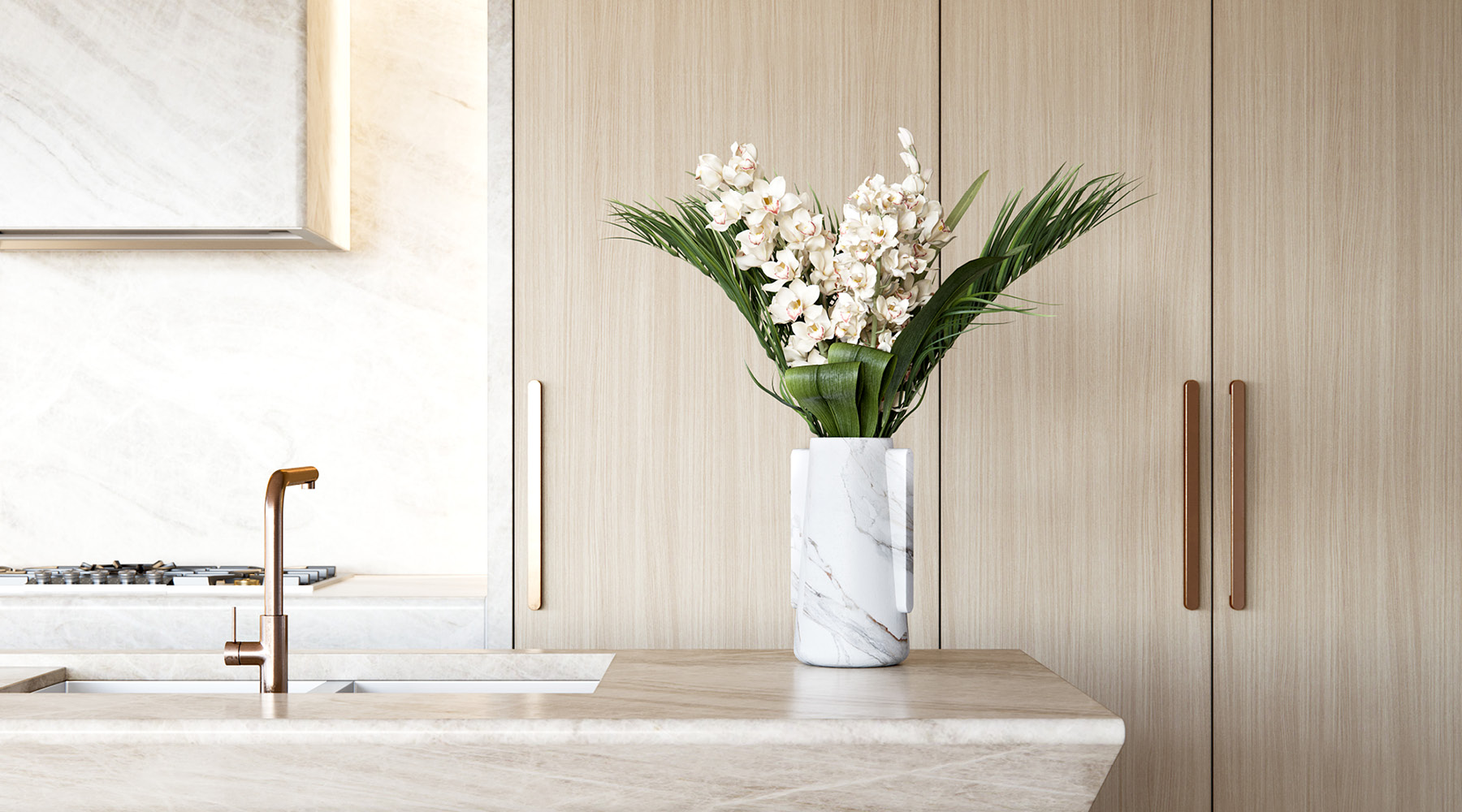 They take great pride in their product, in what they build, and the product they build is there forever. They can show their kids and their grandkids what they have built.

As Cbus Property looks at expansion, Adrian is open to projects that are outside the company’s usual purview of offices and high-end residences. Last year, in partnership with AMP Capital and UniSuper, the firm made its first foray into the retail sector with the purchases of the Macquarie Centre in Sydney and Pacific Fair on Queensland’s Gold Coast.

“We look at everything and anything, wherever there is an opportunity,” he adds. “We are not shy in looking at every sector in property, as long as we believe we can add value and that it translates into returns for the members of the fund.”

A culture of welcoming challenges and moving quickly to seize opportunities helps in this regard. “We are pretty opportunistic. We are pretty nimble,” Adrian says. “We can turn things around very quickly if we believe there is an opportunity that looks right and is right. I think our forte in the past 15 years has been our nimbleness, and it will continue to be so moving forward.”

Cbus Property has a portfolio of buildings worth A$6 billion, and with close to A$5 billion of developable work in the pipeline, the outlook remains positive for the firm. But there are several challenges to navigate, the key one being cost escalations in the industry due to the disruption caused by the COVID-19 pandemic. There are also, for the same reason, supply chain issues that are making it more difficult to procure materials from overseas.

“That is the biggest challenge for us in the next six-to-18 months,” Adrian says. 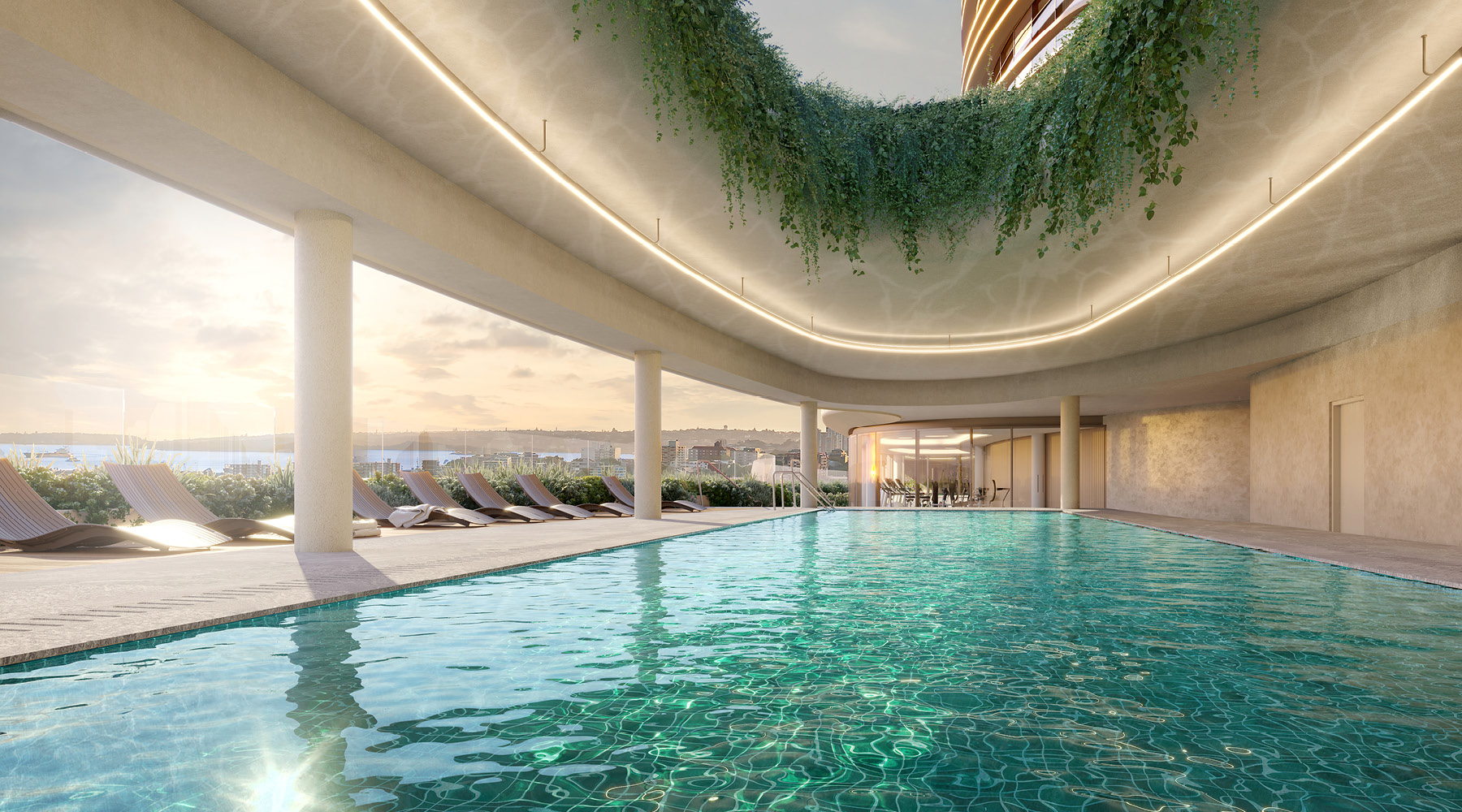 COVID-19 lockdowns and restrictions have meant that at times the company was operating with just 20 per cent of its workforce onsite. “That was what was allowed, unfortunately. But on the positive side, the industry remained open,” Adrian says.

“Did we lose time? Yes, we lost time,” he adds. “But I don’t think there would be a project in Australia that would be on time at the moment.”

Despite the large scale of the projects the firm brings to life, Cbus Property has a small team. Something that Adrian says works in the company’s favour, not least because it enables the nimbleness and appetite for opportunity that informs its growth strategy.

“Culturally, and I know it’s a cliche but we are one big happy family. It’s such a small team of people that it makes collaboration in the office easier. I think we are pretty frank and honest and open because we have grown together,” he shares. “Our average tenure here is about eight years. On a further positive note, our work numbers have expanded by more than 20 per cent in the past 12 months as a result of all the new work we have. We will continue to grow the business as the fund grows.” 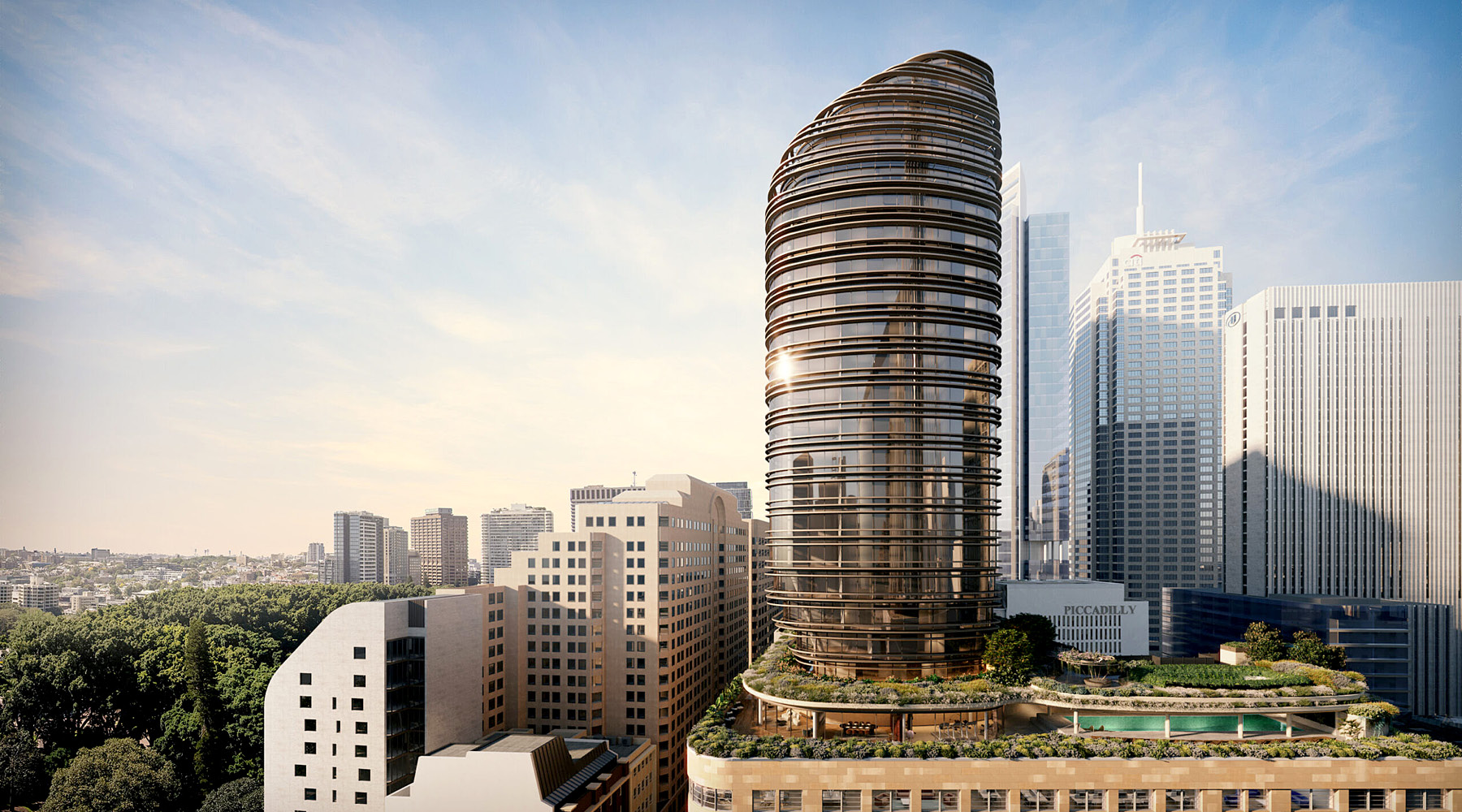 There is a line of people wanting to come and work at Cbus Property, which shows that we must be doing something right.

That culture, along with the company’s continued success, means Cbus Property has a large pool of talent to choose from as it expands. “There is a line of people wanting to come and work at Cbus Property, which shows that we must be doing something right,” Adrian says.

A major attraction for prospective candidates, and the reason current employees value their jobs so much, is that every project the company works on is truly unique, with a unique set of challenges and rewards. “The next product is never the same as the previous one,” Adrian says. “So it is a fantastic opportunity for people to learn and grow.”

The spectacular homes at 111 Castlereagh are just the latest example of how team members’ enthusiasm produces something unique every time, and the fund members at Cbus are already seeing the rewards for their work. Among the homes already sold are three penthouses, including a 460-square-metre, double-storey residence that sold for circa A$35 million, and two sub-penthouses that fetched more than A$15 million each. 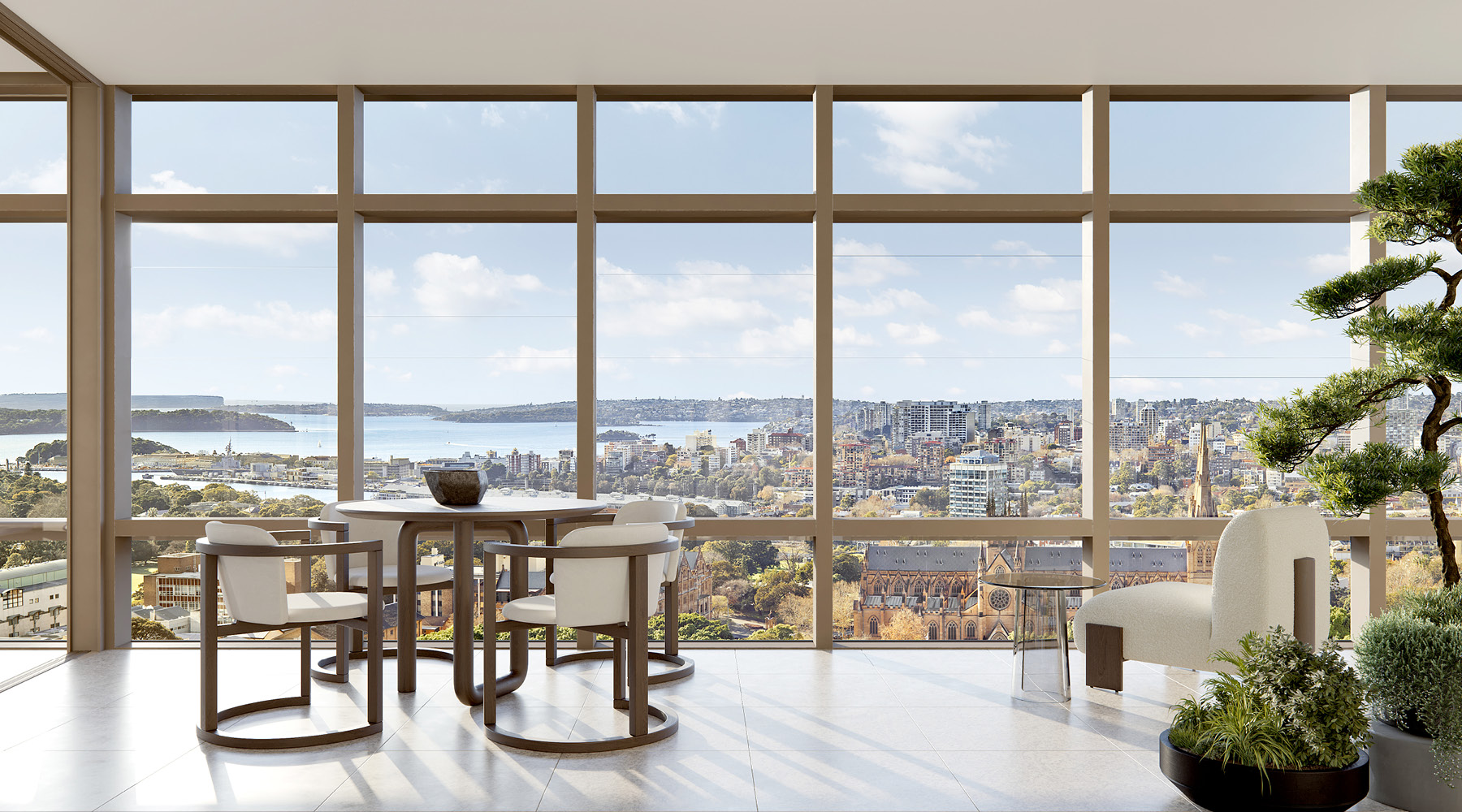 Because the residences cater to the top tier in terms of pricing, “there’s no stone unturned” when it comes to the quality of the finished product, Adrian says. “The completed product always takes pride of place, as far as we are concerned. The attraction for us is that we are leaving our legacy in each of the places that we build.”

With floor-to-ceiling windows, wraparound terraces and breathtaking views of the city skyline, all of the residences at 111 Castlereagh could not be a better example of that legacy.