Seven has always been an important number for Eric Cheng. His car licence plates are 7777, as are his phone numbers and those of his employees. In fact, Eric once bought a property simply because the address was the number seven. He’s also currently developing a ‘seven inspired’ property in Perth, Australia.

Seven is his lucky number, his muse, his spirit number. So it makes complete sense that he should infuse this piece of himself into his Singapore-based development company – Sevens Group.

With a precise eye for detail, a passion for exquisite yet practical design and a desire to build homes with soul, the Founder and CEO of Sevens Group is as unique and successful as his developments.

And now, Eric is bringing his brand, his enthusiasm and his bold and savvy business acumen to Australia, with an exciting vision for expansion.

Eric is affectionately known as ‘Mr Impossible’ for a reason. He defies being told he ‘can’t’ and focuses on the ‘can’, executing brilliantly whatever he sets his mind to.

His energy and vision is infectious, and he operates at a scale and pace miles ahead of others. The eldest of four children, Eric grew up in public housing in Singapore’s Chinatown.

“I’ve always been passionate about property and since I was young, I’ve dreamed of being a developer. But to be a developer, you need a lot of capital,” he reflects. Attracted by a comparatively high salary, Eric worked as a flight steward with Singapore Airlines for more than eight years. A chance encounter with a monk on a flight was the fortuitous nudge he needed to leave the airline and start his entrepreneurial journey. The monk prophesied that Eric was destined to achieve great things in life; he was bang on.

Joining the property industry with one of Singapore’s largest real estate agencies, Eric found a natural home for his interest in property and design. “I learned about selling, strategy and pricing, and developed presentation and negotiation skills during my six years with the company,” he says.

At one point Eric had 1,800 realtors working for him. He made his first million within the first two years. In 2009, Eric launched his own property agency, which expanded into real estate consultancy, valuation and asset management.

A collection of awards followed with Eric presented multiple Young Entrepreneur Awards and other business accolades. Then, in 2014, he sold the agency and property development arm to an SGX-listed company for S$30 million (A$31 million).

“After I sold the business, I asked myself, ‘What should I do? Should I retire, or should I take a slower pace?’ For less than three months, I took a slower pace,” laughs Eric. “Then I launched Sevens Group.”

Established in 2018, Sevens Group is a leading real estate development company. With the experience of building more than 100 completed developments throughout his entrepreneurship journey, Eric is committed to continue creating quality state-of-the-art real estate under Sevens Group.

“We push the boundaries of architectural creativity. We build great houses that you can proudly call home,” he states. “Our clients are high-net-worth with sophisticated taste.” When asked about the business name, Eric smiles. “I’ve always felt a connection with the number seven,” he says.

“It’s an important number for me and a lucky one – it’s my trademark.” When Eric launched Sevens Group, he did so with three simple values at its core – design, quality and service.

“Quality is a non-negotiable – we only develop housing of excellent quality. And, of course, coming from the airline industry, I believe a customer-first approach and after-sales service are key to business success.”

Sevens Group has built a strong brand through awardwinning developments and clever marketing. Within two years of its launch, the company’s financial position is already worth more than A$150 million in Gross Development Value.

“We’re starting to dominate market share in Singapore,” says Eric proudly. “When people talk about land development, they think of Sevens Group.” With focused and exciting expansion plans into Australia, the future for Sevens Group in both countries is looking extremely bright.

No story about Eric would be complete without an understanding of his successful and visionary forays into ventures outside of land development. In 2018, he acquired Japanese foreign exchange trading company FXTrade Financial Co and its affiliate cryptocurrency trading BitTrade for US$50 million.

“While this was a totally new venture, I saw a window of opportunity,” states the serial entrepreneur. Within three months, Eric sold the business for a sizeable profit to global crypto giant Huobi.

“I have no regrets about exploring different businesses. I’ve learned a great deal from each experience. Although others say I’m smart and visionary, I think sometimes we need to take greater risks with greater returns,” he says.

“Your risk appetite changes depending on your environment. If a risk isn’t calculated, then it’s pure gambling.”

A passion for design

Eric loves the design aspect of Sevens Group’s business and is personally involved in every project. He’ll design the initial draft, then discuss with the architect how to conceptualise his ideas.

He’s constantly taking photos of design features and inspiration to integrate into the company’s projects. In his view, you never know when you’ll need it.

He recalls an example: “I was in Venice, Italy, and passed a house with a beautiful gate, so I took a photo of it. Three years later, while designing a house, I remembered the gate and thought it would be perfect for this property. I found the photo on my phone and used a similar design.”

That house turned out to be an award-winning project. Being well travelled, Eric finds inspiration from things that most people wouldn’t notice. “I’m like an artist,” he laughs.

“I’ll take photos of a beautiful towel, an attractive bowl, an interesting wall or even an elegant toilet. If it has a nice aesthetic, you’ll find a photo of it on my phone. I think differently. My passion and design overlay what I do as a developer. Although we’re running a business, we’re building homes, not houses. I make sure buyers are buying our properties for the right reasons.”

And when it comes to choosing a house, he has a unique process that defies convention. “I’m a property man and I have strong instincts. When I walk into a house, I see things differently. The house communicates with me,” he claims.

“I don’t know how to explain it. If I have a good feel for the property, I’ll return three to five times a day. I’ll go in the morning, the afternoon, the evening, midnight – sometimes I’ll visit at 3am. I feel a property talks to me in a different voice at different times of the day.”

Sevens Group has bold plans to expand into Australia. The country’s proximity to Asia, and its high standard of living, stability and focus on lifestyle and family is a comfortable fit for Eric. He has a vision for Australia and no doubt a “gut feel” as well.

Sevens Group has started its first development at Mosman Park in Perth with the company’s signature style and quality finishes. 75% of the project was sold within less than three months.

With this development giving Eric confidence that Sevens Group’s business model will fit in Australia, he’s embarked upon creating a larger portfolio in the country. “I started scouting for new developments to complement the lifestyle concept development at Mosman Park,” he explains.

The next venture for Sevens Group is the redevelopment of Jojo’s Café, a heritage venue located at the historical Nedlands Baths marina on Perth’s Swan River. Factoring the location’s unobstructed and unparalleled 360-degree views of the river and the building’s iconic legacy, Sevens Group has ring-fenced close to A$37 million for this exciting project.

“I want to redevelop this place into an iconic Perth landmark,” states Eric. With a 3,484-square-metre footprint, Eric’s vision is to transform Jojo’s into a sprawling tourism hub comprising high-end restaurants and dining experiences; wine lounges; an exclusive and world-first floating hotel with reception and function facilities; and a marina with visitor yacht parking and leisure craft rentals – all while retaining the heritage and history of the existing Jojo’s Café.

“My team and I have been in constant engagement and immersion with the state government and we are excited to see this transformation come to life,” Eric enthuses. This project is a main focus for the company in 2020. It also marks an important milestone in expanding Sevens Group’s business footprint in Australia.

Creating a legacy together is why ‘team’ means everything to Eric. “I want everyone to be proud of what we’re building together.” Sevens Group employees are empowered to take ownership of their roles and to use their initiative to achieve this shared vision.

“I’m an individual who micro-manages my businesses but not my team. I give them the empowerment, the big picture and show them the vision. Although sometimes my vision can be a bit too ‘wow’ for them,” laughs Eric.

“My leadership style has changed over the years. I used to be strict and run a tight ship. But today I manage the company with a family-like touch, although I do push my team to do better. I want them to have direction and opportunity.

“At the end of the day, I’m trying to do something good for the company and I want to be respected for that. I like to think I’m fair. I use reward versus effort as motivation. If we work hard and make money together, I reward them as a team. I always tell them, ‘We work first, talk later.’ Ultimately, the results speak for themselves.”

“By working with the right partners, builders and team, you can create a strong, successful network and an efficient ecosystem,” suggests Eric. “I always believe that network is equal to net worth.” 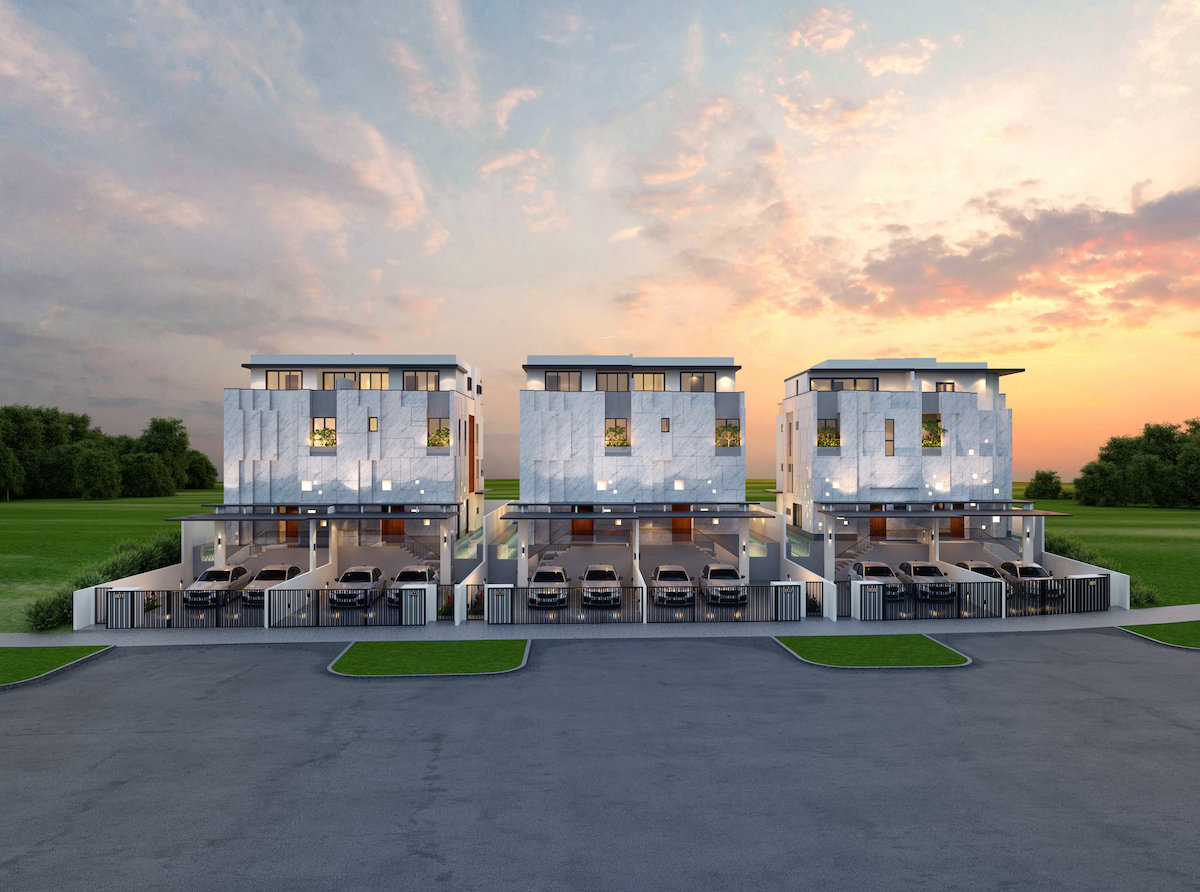 For this reason, Eric has very selective criteria to determine who the company partners with. “The most important aspect is trust – we can’t break each other’s trust,” he explains.

“Second, urgency is an imperative – I want to be fast and able to react quickly. Third, there can be no shortcuts in quality. Quality is part of our culture. And, ultimately, partners must be visionary and see opportunity for the Group’s growth.”

Family is everything to Eric, and so is creating a foundation with his wife Lena for their young sons, Ethan and Edgar. “I want the very best for my sons, and I hope they will follow me into the business and take it to a greater height than I can,” he shares. “Our family has a business for them if they have an interest. Even now, I teach them my ways.

“I tell them there are three things they need to know. First, there are no shortcuts in business; second, you must have a strong eye to see things that other people don’t see. This comes from experience and a gut feeling, and I believe it is something you can learn when you are young and have passion. And lastly, you must have integrity.”

With the company’s exciting expansion plans into Australia and its strong position in Singapore, Eric jokes that he’s created a business for each son. “They can manage one country each,” he laughs. 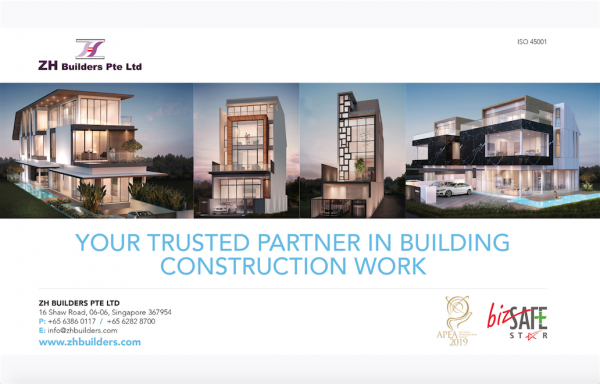