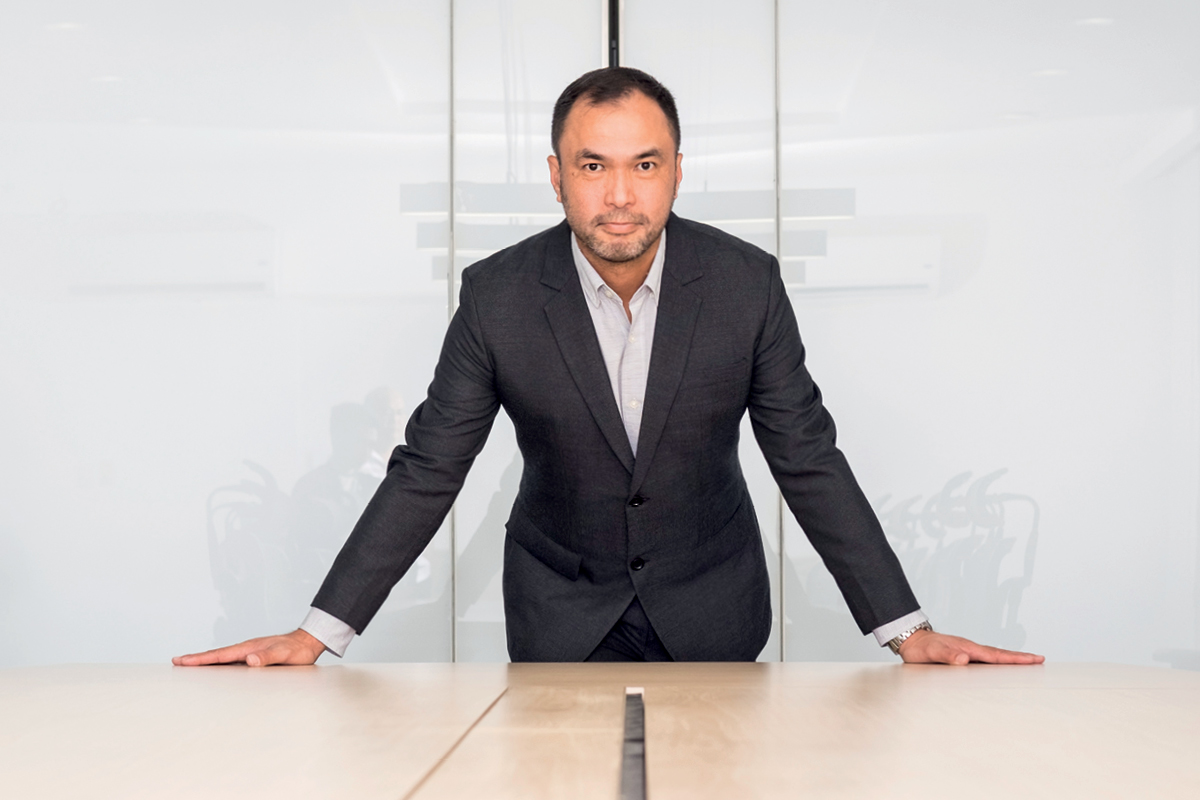 Makati is one of Metro Manila’s 16 cities. It’s an integral part of the Philippines’ cultural, economic and social life, not least because it serves as the financial nucleus of the National Capital Region, as well as a hub for culture and entertainment.

The CBD is home to many of Metro Manila’s skyscrapers and one of South-East Asia’s most popular commercial districts. Though its population is just over half a million, it’s estimated to double during the day, thanks to many people travelling into Makati for work and business.

The importance of Makati’s CBD, therefore, cannot be overstated – nor can the importance of maintaining the CBD’s amenities and infrastructure for the benefit of all residents and visitors. Fortunately, the CBD is under the care of the Makati Central Estate Association (MaCEA), which is dedicated to creating a better city for those who frequent it.

Jonathan David, MaCEA’s General Manager, believes continual improvement is the key to ensuring Makati remains the best possible city for all who frequent it. “A city needs to constantly transform and reinvent itself to remain relevant and interesting,” he says.

“A city needs to constantly transform and reinvent itself to remain relevant and interesting.”

“We do this by making the CBD pedestrian-friendly and well-connected, celebrating its distinct neighbourhood, transforming it into an art centre and helping redevelop it further into a vibrant central business district.”

Jonathan was appointed General Manager in 2016. His predecessor had been with the company for 22 years, and MaCEA itself has been around for more than half a century. Jonathan’s decision to take up the leadership of MaCEA was therefore an ambitious one, given the legacy that preceded him. Nevertheless, Jonathan believed he could introduce some changes to estate management, particularly for the Makati CBD. 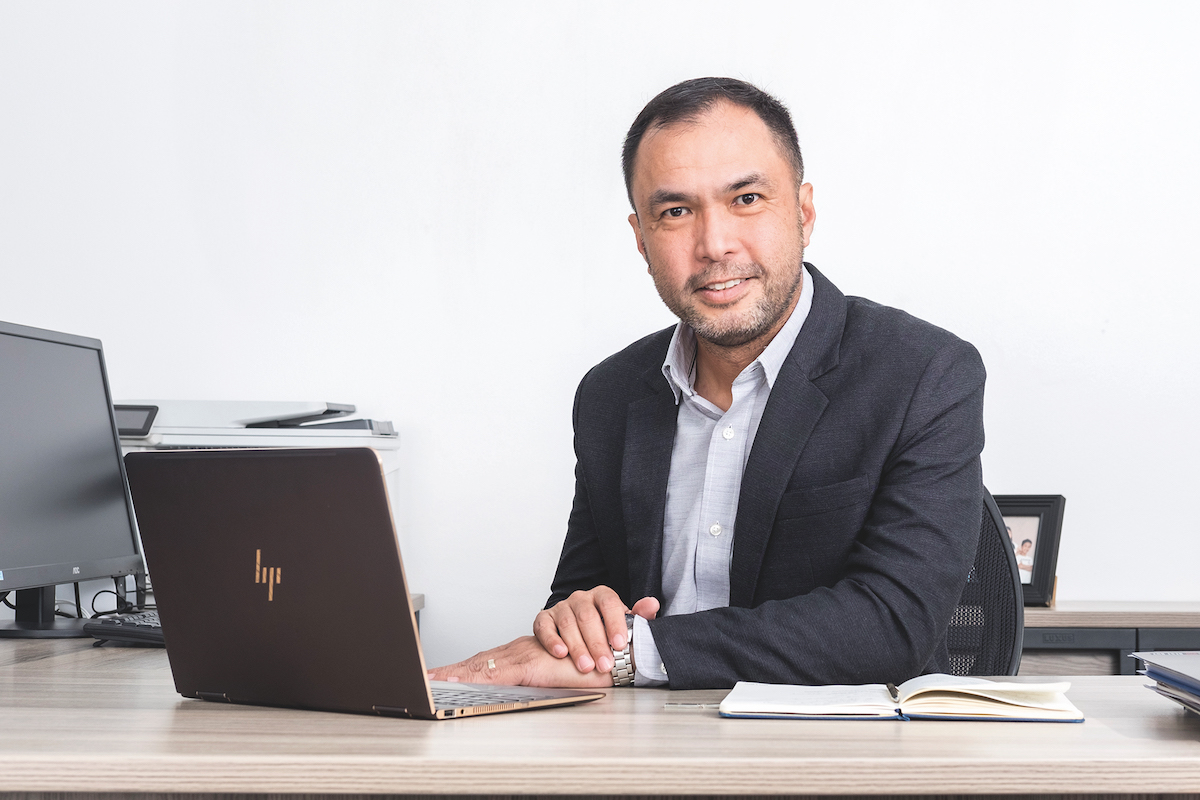 Upon joining MaCEA, Jonathan implemented a five-year plan around improving the safety and security of Makati’s infrastructure. The company quickly embarked on many projects over the following years, including the construction of two overpasses along Senator Gil Puyat Avenue, intended to ease traffic and provide pedestrian safety. Sidewalks and sewer and drainage systems were redone to accommodate a construction boom and a growing population.

Besides these more practical renovations, MaCEA has undertaken efforts towards the introduction of green spaces and aesthetic transformation. The company has constructed small gardens (what it calls “urban patios”) on street corners, with 20 now spread across the CBD.

In a similar vein, several pedestrian underpasses have been renovated to be more modern with the installation of glass to allow more natural light, but the construction of green spaces remains one of MaCEA’s key responsibilities.

“The biggest project that we had in 2017 was the revitalisation of the city parks. We have three parks – Washington SyCip Park, Legazpi Active Park and Jaime Velasquez Park,” Jonathan says.

“The biggest project that we had in 2017 was the revitalisation of the city parks.”

Collectively, the first two represent a total of 16,000 square metres of public park space. “A lot of people were surprised that there are parks in the middle of the concrete jungle. Before that, they didn’t pay attention to the parks because they were messy or not properly maintained,” Jonathan adds.

“When I came in, we revitalised those parks. We got a consultant to do the master planning. They turned out well, because at the end of the day, they create a natural environment, making the city beautiful, liveable. That revitalisation of the parks brought a lot of changes. A lot of the occupants of the surrounding buildings are so happy because they can look out their windows, and say, ‘Oh, there’s a beautiful park underneath.’”

Today, MaCEA’s office sits next to Legazpi, giving the organisation a clear view of one of its most significant civic contributions. One of the additions includes a jogging path at Legazpi Active Park, something of personal interest to Jonathan himself, being a runner. Many people make use of it, Jonathan says, from dawn to dusk (and beyond – it closes at 10pm).

It’s an example of just how important these kinds of amenities are, even (or especially) in heavily urbanised areas. It also shows the centrality of people to the idea of a city – for example, MaCEA’s current aim is to improve the CBD for individuals, rather than for traffic. 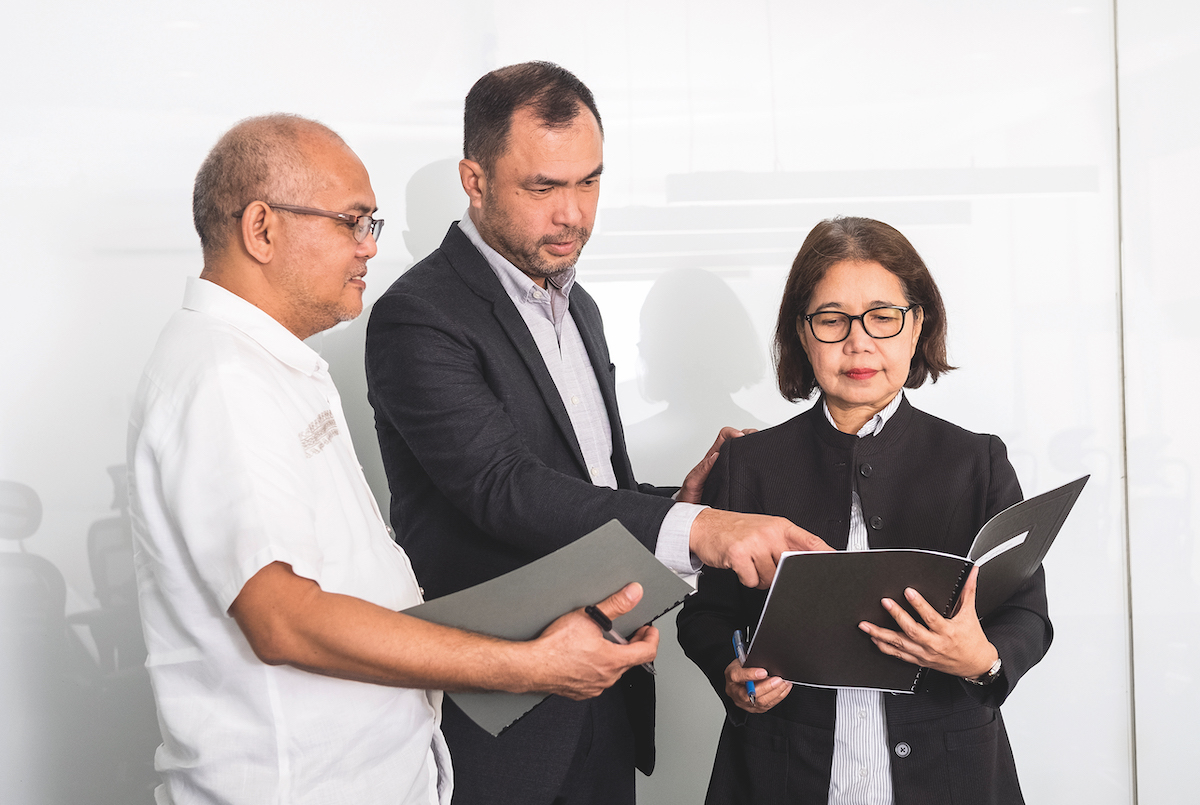 “We’re focusing more on our pedestrian project,” Jonathan explains. “We really want it to be a refreshed city because Makati is quite old already. We want it to be refreshed by improving sidewalks, focusing on the walkability, the mobility. We want people to be able to move as efficiently as possible without any obstructions. That’s our main goal, to really prioritise the pedestrian walkway network.”

“We really want it to be a refreshed city because Makati is quite old already.”

Jonathan’s civic-mindedness is no doubt a reflection of MaCEA itself, and its status as a not-for-profit property owners’ association. The organisation’s central function is the betterment of its members’ communities, through improvement of local infrastructure. One such project – currently in the works – is a three-year development announced right at the end of last year.

“We have this future-focused project,” Jonathan explains. “We call it the MaCEA underground conduit network. We’re building pipes underground rather than having them hanging on poles, to provide fibre optics and transform Makati into a sort of intelligent city in the future. That’s our main project for the next three years.”

With these developments, MaCEA is pursuing projects of urban modernisation similar to those undertaken in Singapore, for example. The affluent city-state has also introduced greenery to its CBD, as well as new housing, both to prevent the area becoming “mono-use”, and to promote an active nightlife.

Makati is therefore in good company, with other major cities working on similarly expansive projects within the CBD. It’s possible that such efforts reflect the future of urban development; Jonathan certainly aims to make Makati representative of that future.

“I would say we are a game changer; we can make Makati more relevant and future-focused,” Jonathan explains. But at the core of this is ensuring that the organisation itself exhibits these traits – after all, how else can MaCEA impart them onto the city?

“We believe that MaCEA should always be relevant, innovative, progressive and future-focused itself,” Jonathan continues. “We should not stop evolving and improving for our stakeholders – that’s our main line. We keep on improving ourselves; we keep on being relevant.”

MaCEA has managed the Makati CBD for more than 50 years, and indeed its efforts have pre-empted those of cities like Singapore to have diverse capabilities.

The financial hub’s amenities have long included shopping, dining, culture and leisure, all while serving as the centre of the Philippines’ finance industry. With residential areas in close access, and traffic flow well managed in the CBD, MaCEA has played a big part in the city’s continued modernisation. 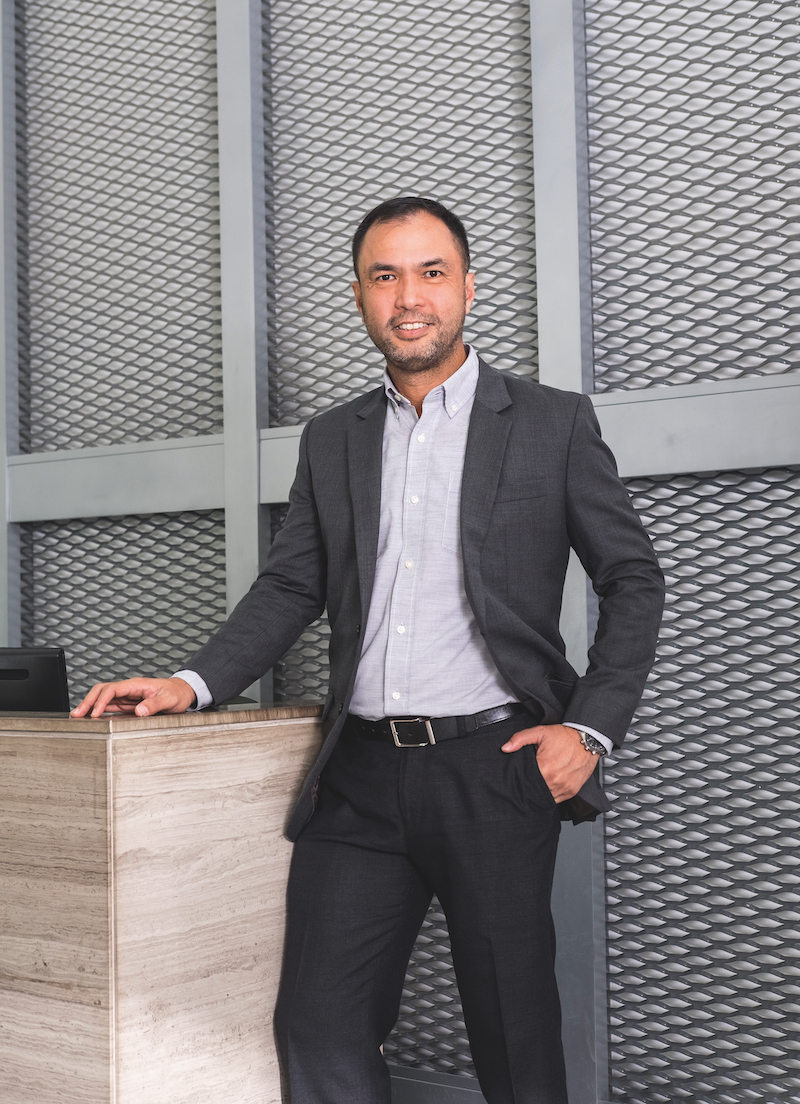 But there’s always a next step when it comes to urban development. As the concept of smart cities continues to gain traction in urban planning, Jonathan is also looking at the power of intelligent networks, and building off the potential of the conduit network.

“In terms of opportunities, there are a lot around digital transformation in particular,” he says. “We want our city to be an intelligent city, by providing a digital backbone to other smart city technologies in sensing, networks and applications.”

MaCEA completes these projects in service of its members – nearly 400 buildings and their operators across the Makati CBD – and Jonathan says the organisation’s priority is happy customers.

He acknowledges it can be tough, juggling the interests of so many parties. Approval from all stakeholders must be acquired, from local government units and barangays to the lot owners and residents.

At the same time, work never stops for MaCEA – Jonathan describes it as “practically 24/7 – anything can happen anytime of the day”. It’s certainly a challenge to continue projects within a constantly moving city, one that requires careful coordination and management.

“I hate to say it, but property management is a thankless job because when you do your job, it’s like, ‘Oh, you’ve done good, that’s expected from you.’ But at the end of the day, we just want people to be happy, to be able to walk around safe and sound. We take care of the public in the Makati CBD.”

The other major group of stakeholders includes MaCEA’s partners and suppliers. Jonathan describes MaCEA as more of a “service association” – the company deals with agencies that handle security, housekeeping and groundskeeping, car park operations and so on, rather than handling these directly.

What do you enjoy about your job?
It’s not monotonous – there’s always a new challenge popping up each day, from construction-related concerns to an issue as small as a dog mess problem.
What’s the key to maintaining a passionate team?
The sense of ownership among our team by making each day better than yesterday.
What are your greatest strengths as a leader?
I walk the talk. I listen and value my people.
How do you define success within your own role?
Success for me is seeing our customers happy and satisfied with our services – giving our customers what they deserve.
What’s the most important lesson you’ve ever learned in business?
Empathy – the ability to understand and share the feelings of another. If you don’t understand your customer, you won’t be able to serve them well. I always remind myself to put myself in their shoes.
Who or what inspires you?
My family – my backbone in life. At the end of the day, you will always go back to your family.

Specific partners include Robust Integrated System Expertise and Resources, which is assisting with the underground conduit project; Green Enviro Scape Services, which is collaborating on the urban patio project; and Century Iron Works, which is providing the Legazpi car park building.

For Jonathan, practising honesty and integrity in all interactions with suppliers is integral. “They are very happy dealing with us,” he asserts. “They give their 100% as far as their workmanship is concerned. As we all know, we have a lot of infrastructure projects, so we have a lot of dealing with our contractors.

“Our suppliers and contractors enjoy working with us because we ensure we’re providing ease in business transactions, not making it difficult. We want every customer – internal or external – to have a smiling face after they do a transaction with us. That’s our goal. They are happy dealing with us.”

“Our suppliers and contractors enjoy working with us because we ensure we’re providing ease in business transaction, not making it difficult.”

Coordinating all these outsourced operations, while meeting the expectations of other stakeholders, requires a well-oiled team, especially since MaCEA’s team is a small one. But Jonathan describes himself as “blessed” to have the team he has, and envisions them taking on an even greater supporting role for its members.

“We want to expand our role, not just as an association, but also to take care of our administrators and building owners in their day-to-day operations,” he says.

“We’re handling about 380 buildings. Imagine that. Day-to-day operations and their administrators – not on the technical side because we handle the construction and everything, but on a day-to-day basis, we want it to be efficient. We’re a lean organisation, we’re only about 10 employees and everything else is outsourced. We’re taking care of an 118-hectare CBD.”

Working with that small team, one could imagine it’s difficult to develop such a thriving city, but Jonathan has a plan to transform not just Makati, but the industry as well. When asked how MaCEA can achieve this, he replies, “By having the right vision and by involving all our members in all our activities and programs.” 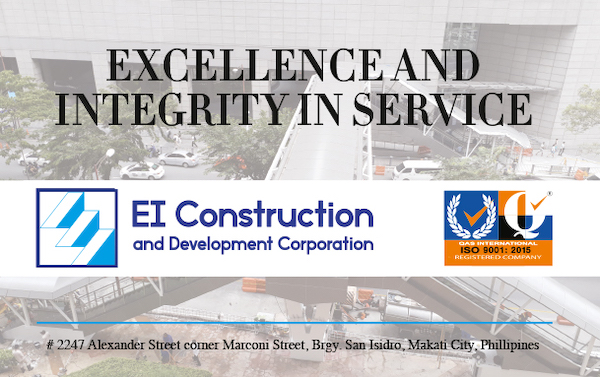 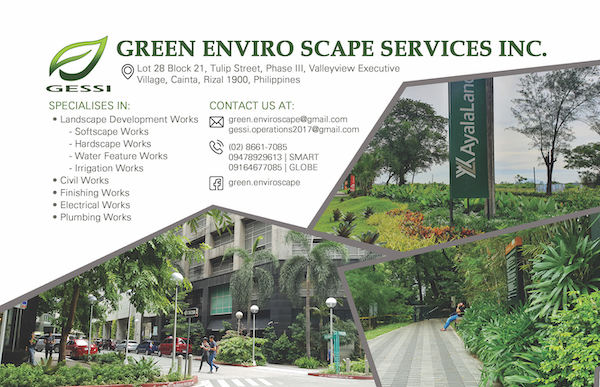 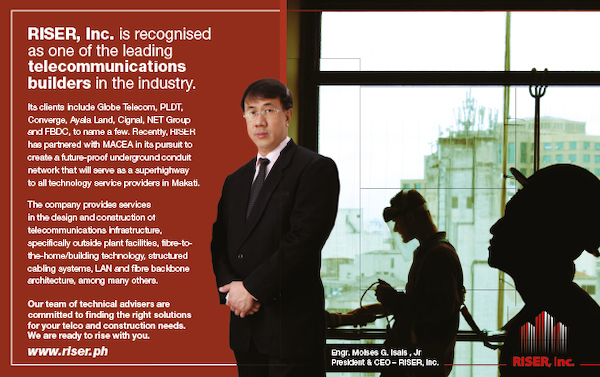