After serving in the military and being active in the police force for just shy of a combined four decades, former police general Manuel “Manny” Gaerlan was ready for change. So, upon his retirement, he was eager to take on a completely different type of role that was no longer connected with any security-related industry.

And as luck would have it, his wish was granted; the Philippine President placed him in the role of Director of Clark Development Corporation (CDC). “It’s been a long-time dream of mine to join the corporate world,” says Manny, who’s now President and CEO of CDC. “I came on first as a member of the board of directors only – it was not even a full-time role. Then CDC’s former President resigned, and the board recommended me. That’s how I got the position.”

Landing his dream job could have been seen as both a blessing and a curse, as it came right in the throes of COVID-19 in January 2021. However, with his unique skill set and incredible passion, Manny has been able to navigate his new position with relative ease.

“It’s been exciting for me, coming from a military and police background – this is a new thing for me,” he shares. “I’ve been able to apply what I’ve learned in the past to something that I love most. In this position, I’m always searching for excellence and caring for my people, caring for the stakeholders. We’re a business with heart now.”

To navigate the uncertain waters stirred by the coronavirus pandemic, Manny quickly got to work adjusting systems and procedures to adapt to the changing times. “And now that we are preparing for a rebound of the economy, we’re also adjusting our plans, programs and goals to stay on course of our vision, which is to make Clark Freeport Zone the premier choice of MICE [Meetings, lncentives, Conferences, Exhibits] and a leading destination in the Asia–Pacific region,” he shares.

Located in the heart of the Philippines’ Central Luzon region, Clark is part of Pampanga and Tarlac provinces and an up-and-coming hub for business, aviation and tourism in the country. “Our main plan now is to develop one of the districts in Clark into a smart city,” he explains. “This is a pilot project that will kick off our long-term plan of making the Freeport a smart city and a modern, sustainable aerotropolis [airport city] by 2030.”

In this position, I’m always searching for excellence and caring for my people, caring for the stakeholders. We’re a business with heart now.

The area has a lot going for it as it’s becoming more and more connected. A key advantage, Manny says, is its international airport because airport cities are often regarded as powerhouses of urban economic growth and business centre locations. But even beyond that, the government is currently constructing the Manila railway connection, and the Subic to Clark logistics railway connection is already in the advanced planning stages.

“In the near future, we will be 55 minutes away from the National Capital Region,” he points out. “And even though we don’t have a seaport here in Clark, the railway connection to the port of Subic is going to make our supply chain and logistics system so much easier. Everything is building up around Clark, connecting it to all of its neighbouring regions, including the National Capital Region.”

As for Manny’s role in all of this, well, it’s not exactly singular-focused. “I have a dual role here,” he explains. “CDC, of course, is a government owned and controlled corporation. We manage and administer the properties in the Clark Freeport Zone and Clark Special Economic Zone. At the same time, we’re also the regulator and the de facto local government unit. “So I serve as a de facto mayor inside the Clark Freeport Zone and Clark Special Economic Zone while also delivering social services, especially at this time during the pandemic. I am not only concerned about the business side of CDC but also about vaccinations, how to provide social services to the affected sectors and how to efficiently provide healthcare services to our locators and residents here in the Clark Freeport Zone.”

Even with the extra responsibility, Manny says it’s nothing compared to his former career. “When I was in the military and police service, I was always busy and away from my family. It was a full-time job 24/7,” he reflects. “Although being CEO is also a full-time job, it’s not nearly as demanding as the role of a military or police commander. I’m happy to be dealing with businessmen and investors. It’s a completely different world.”

Manila has been on some version of lockdown for more than a year. So, while incorporating innovation has been fundamental, leading with an attitude of flexibility and care has been just as essential. “We are slowly opening up our economy here but, at the same time, we’re also being careful not to get infected by the virus,” Manny says. “I have incorporated many changes in our business systems, in our dealings with our locators.

Establishing personal relationships makes my work much easier. By making friends with everybody and getting their input and opinions, I am able to remove barriers between my stakeholders and the administration of CDC.

“I’ve introduced some innovations to our systems and procedures, and we’ve incorporated technology in our attempt to improve governance within CDC. It’s a process, but we are adapting. And we will be making Clark Freeport Zone more business and citizen friendly as far as the conduct of business is concerned.”

An essential component of this is the development of relationships – something Manny regards as absolutely vital. “The first thing I did when I assumed the role was to make a courtesy visit to my fellow stakeholders, not only in the Clark Freeport Zone, but also in other government agencies,” he shares. “I wanted to establish closer working relationships, something more personal than just leaving a business card.”

And the same goes for the locators, of which CDC has more than 1,200 in the Clark Freeport Zone. “I visit them occasionally and cover as many companies as I can, meeting with their executives,” he adds. “I also do the same with the local chief executives here in Metro Clark. We have a council here where I am the Chairman and the members are two governors and five mayors. “I have to establish friendly relations so we can work together closely, even during the pandemic. I open myself up for any matter at all that they might have with Clark Freeport Zone. They can just call me or send a message.”

It might be more effort up-front, but Manny swears it pays off in the long run. “Establishing personal relationships makes my work much easier,” he confirms. “By making friends with everybody and getting their inputs and opinions, I am able to remove barriers between my stakeholders and the administration of CDC.”

We have a superior quality of life and offer a high ease of doing business here in Clark Freeport Zone.

His approach is obviously a key differentiator, but even more, he believes CDC is a stand-out simply because of its neutrality. “Our distinct advantage is our human resources,” he reveals. “We are not a political entity. In a city or municipality, you have to deal with the mayors who get re-elected every three years; that does not happen in Clark. The CEO is apolitical.”

The Clark Development Corporation Smart City project proposal was ranked first during the evaluation of the applications for Urban Development-Type Planning Projects under the K-City Network 2021 Smart City Development Planning grant competition, earning it approximately US$600,000.

CDC has also set Clark Freeport Zone up for success and is on target to becoming a landmark development in the country. “We have a superior quality of life and offer a high degree of ease of doing business here in Clark Freeport Zone,” Manny says. “We have the infrastructure, we have the human resources, and now we are trying to improve the systems and procedures. It’s the whole package.”

“Clark Development Corporation (CDC) has been one of Metro Clark Waste Management’s most valuable allies for the past 20 years. As a supportive landlord, CDC is a critical partner in achieving Metro Clark’s vision of delivering world-class waste management for the Philippines.” – Vicky Gaetos, Executive Vice President, Metro Clark Waste Management
“Clark Development Corporation is a strategic partner in our commitment to support the needs of locators and communities in the Clark Freeport Zone. We were able to invest and rebuild world-class water and wastewater systems that are vital for supporting and promoting economic opportunities and growth.” – Christina Cruz, General Manager, Clark Water Corporation 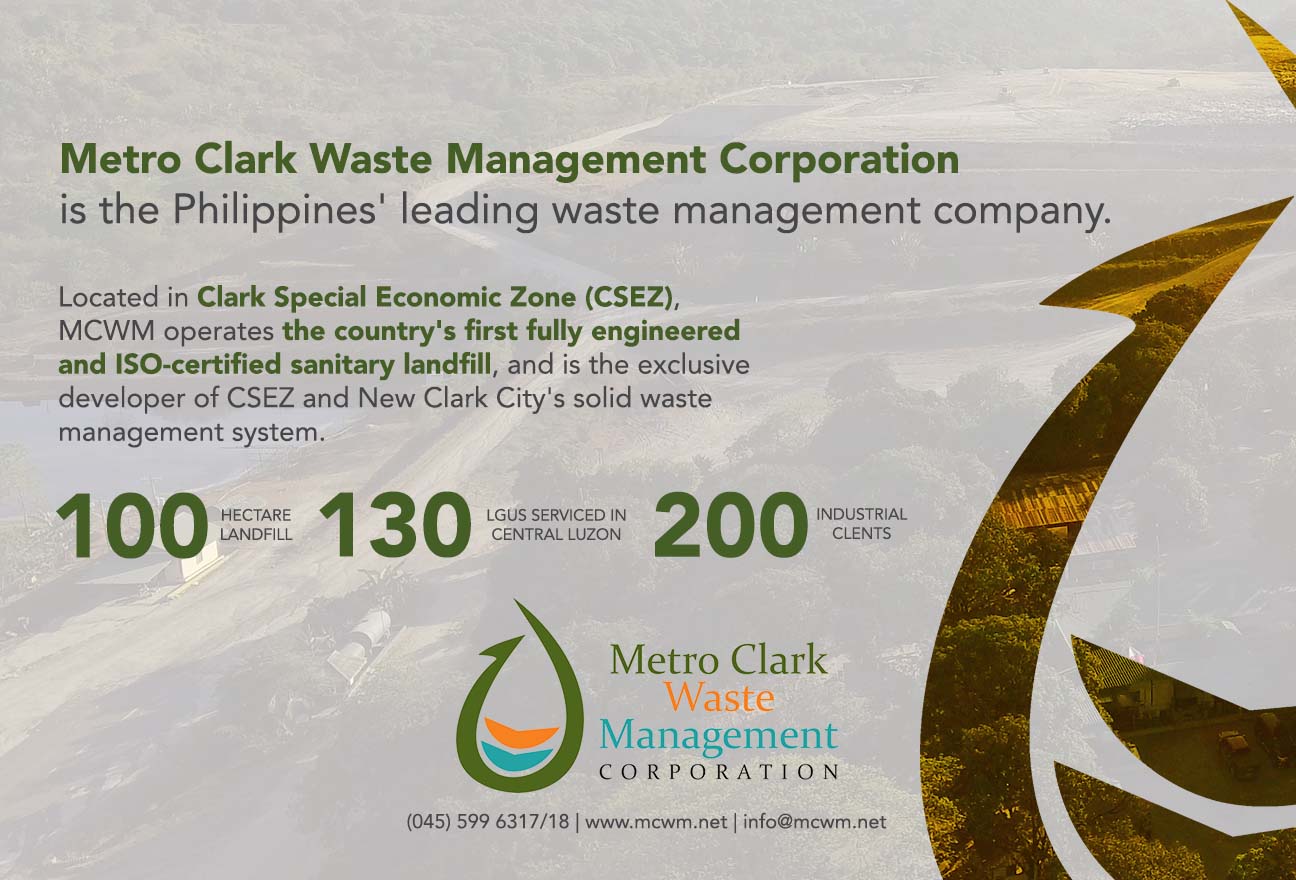 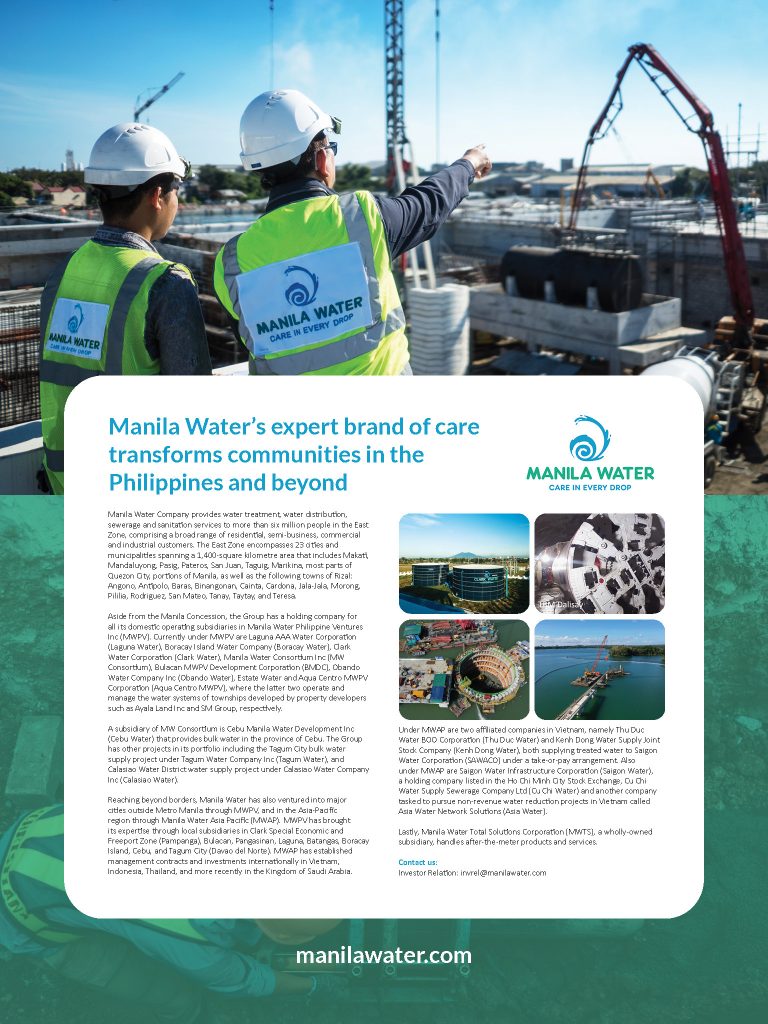