“The buildings themselves are our billboards”: Muhammad BinGhatti When Muhammad BinGhatti was at university, he’d buy a newspaper every morning and turn straight to the financial section. He’d pore over photos of the well-known CEOs who were in the news and dream that one day his picture would grace those same pages.

“I truly believed it would happen,” he remembers. “I’d go shopping and see famous brands named after their founders like Ferrari or Coco Chanel and dream that one day people would hear the name BinGhatti and think, ‘Oh yes, those unique towers!’”

As it was, he didn’t have long to wait. After taking over the family property development business after his college days in 2014, Muhammad set about transforming it into one of the leading holding companies in the UAE and creating a series of stunning architectural towers in Dubai. Binghatti operates in multiple sectors including real estate, food and beverage, hospitality, fast-moving consumer goods, construction and design, with a portfolio of more than 40 projects and exceeding a value of AED3.5 billion (€$843 million).

What sets Muhammad apart from almost all other CEOs in the industry is that he’s a qualified architect and plays a major role in designing the buildings himself. The structures are so dazzling that the buildings are instantly recognisable as his own, and his dream has come to fruition. “We’ve changed how people perceive real estate by introducing the idea of amalgamating art into properties,” he says. “So it’s not just about the property, it’s about selling a brand like you would in the automotive or fashion sector. We’ve changed how people perceive real estate by introducing the idea of amalgamating art into properties.

“It’s a similar strategy to that used by Hermès, Gucci, Dior or Mercedes-Benz, Ferrari and Lamborghini. When you see a Lamborghini, you know what it is because it has experienced designers, and the company uses the same approach. Just as you’d go to Louis Vuitton to buy a beautiful bag, you will associate the company with the apartment that you seek to purchase.”

Binghatti was founded in 2008 by Muhammad’s father, Hussain BinGhatti Aljbori, the son of a nomadic Bedouin merchant who was already overseeing construction projects by the time he was 16. The company was an umbrella organisation for his many business interests. It was when Muhammad, who is also an artist and poet, joined six years later that the property design and construction side of the business began to really take off under its mantra of ‘the art of property’.

“It places me in a unique position as CEO, as I’m personally involved in conceptualising the identity of all our properties. I don’t spend the marketing budget on billboards across highways as the buildings themselves are our billboards,” he shares. “The properties are all completely unique, and require different construction techniques and a specific calibre of designers and materials. One of the ideas we’ve been toying with is smart properties with integrated artificial intelligence to bring the buildings to life, and thereby interact with humans.” 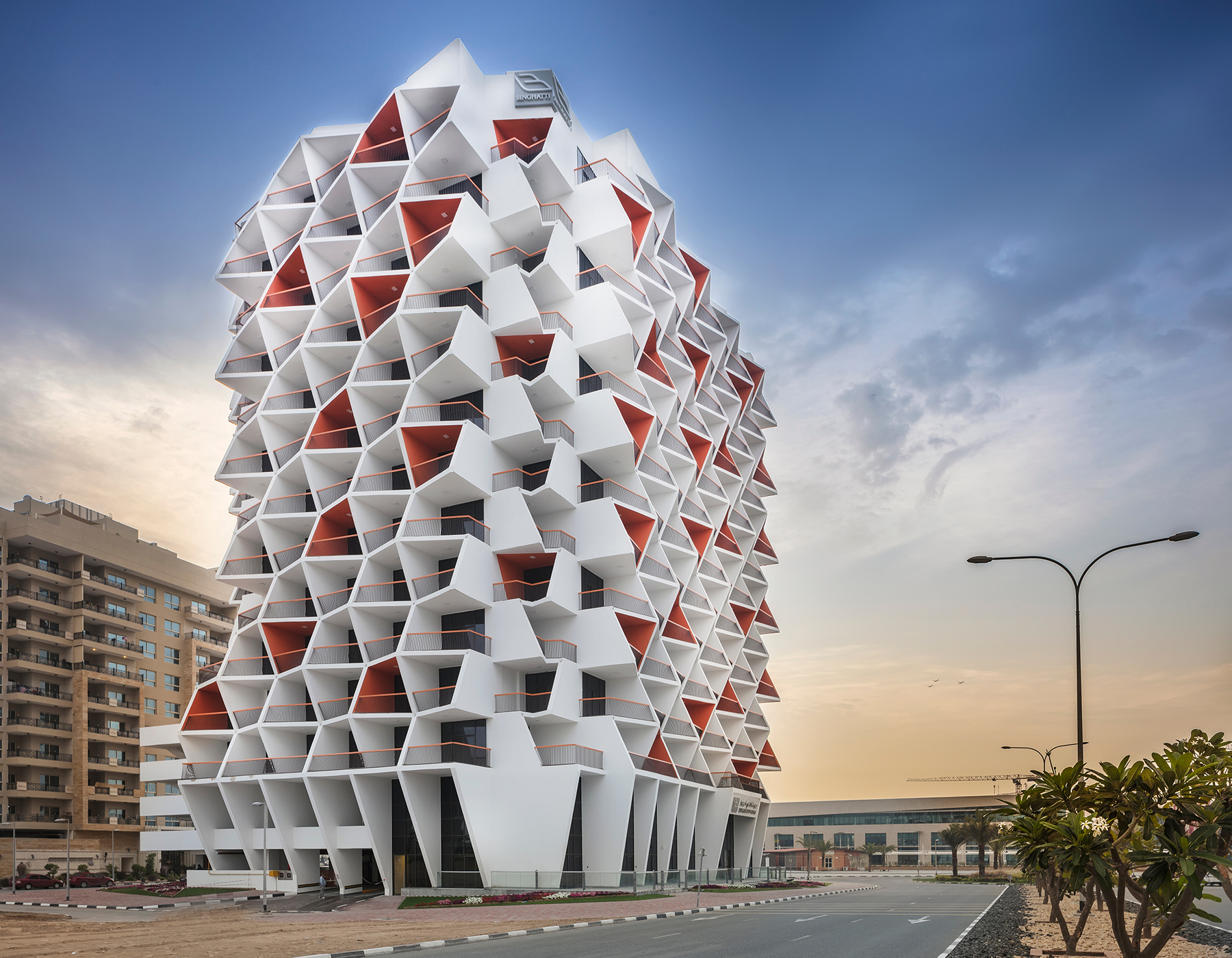 “In a Mercedes-Benz dealership, there’s an S-Class, a C-Class and an E-Class. You can tell they’re a family of cars made by the same manufacturer, and we use the same logic. When you look at the Binghatti Views tower, Binghatti Sapphire or Binghatti Vista, there’s a brand DNA,” Muhammad explains. “That’s really been our vision since the beginning, that if you say ‘Binghatti’ in front of anyone they’ll know what it is. Getting to that point has been a great journey, and very humbling.”

He aims to double the property portfolio within two years and hit the AED$6 billion (€$1.5 billion) mark in value. One way he’ll achieve that is to focus on major construction projects right in the heart of Dubai, rather than on the outskirts.

But he’s adamant that he doesn’t consider Binghatti to be a property developer at all. Each building must have a much deeper relationship with its residents and tell a story about its purpose, so it elicits meaning.

“When I was younger, I watched the British car show Top Gear and it said that the way to know if a car is a supercar is whether a seven-year-old child turns around to look at it. It should be so special that it’s able to evoke powerful emotions, even in young children,” he suggests.

“Well, people come into the office and say, ‘My son is in kindergarten, and he keeps telling me to look at the white building, the orange building and the LEGO building’, so I guess we can even cater to a five-year-old in terms of affecting emotions.”