“We know all our customers personally.”: Gary Neiman 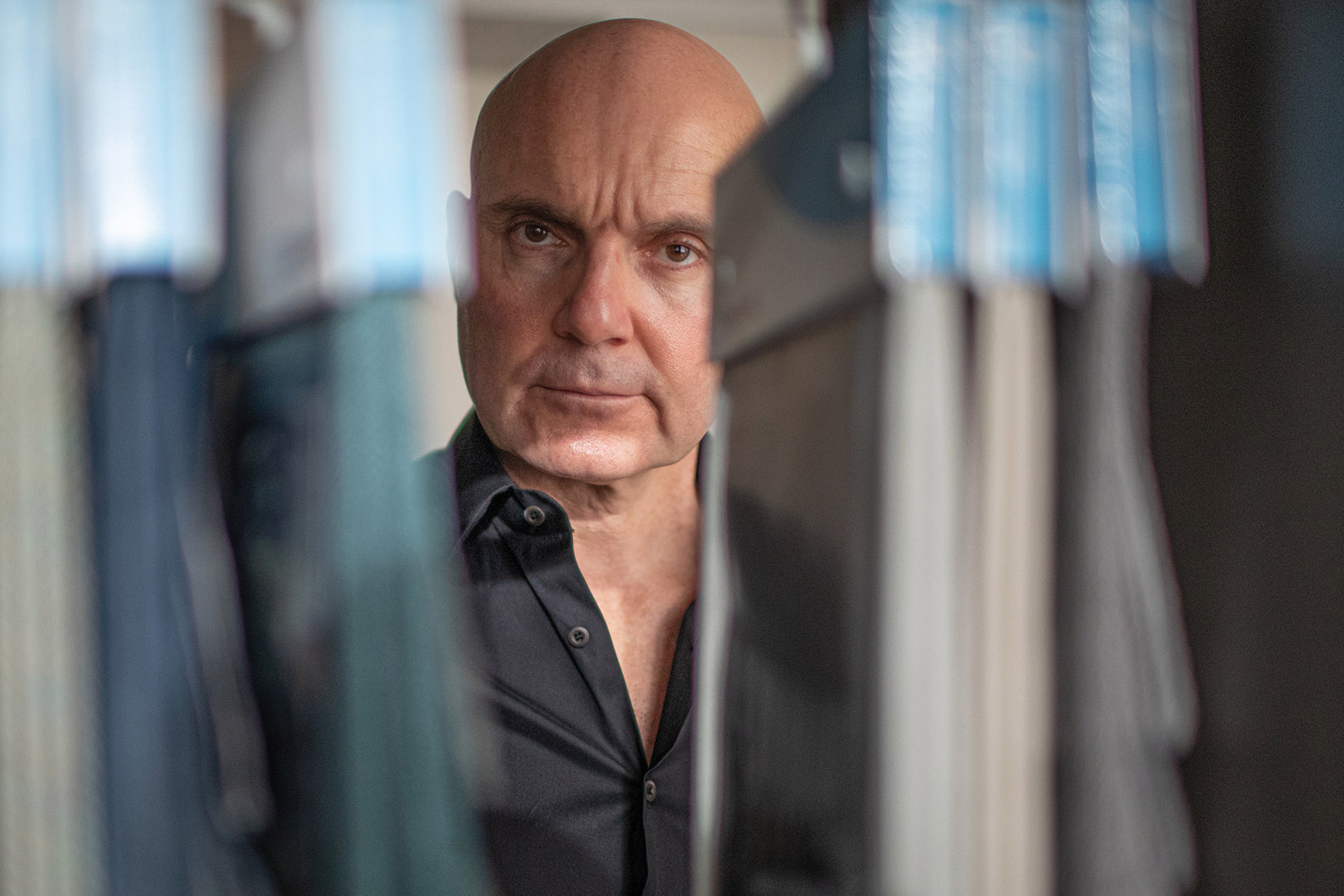 Throughout his 30 years working in the textiles industry, with thousands of clients in numerous countries, Gary Neiman says he has never once run into a serious conflict with a customer, supplier or peer. “We don’t have fallings-out,” he says. “There’s not one person in the fabric industry that I don’t speak to.”

It’s easy to believe. From the moment you meet him, Gary, the South African-born Chair of Bru Textiles, comes across as warm-hearted, generous and sincere. In the fabrics game, he reveals, there’s simply no other way to do business.

“Our customers, we all know them personally,” he shares. “We know their families; we’re very close to them. And they know us. We look after each other. It’s a very close-knit industry. Even though there are thousands and thousands of players.”

Based in Belgium, Bru sells tens of millions of metres of interior furnishing fabrics each year to more than 100 countries, supplying leading fabric brands, furniture manufacturers and the hospitality sector. The company acts as a converter. It designs fabrics and brings them into inventory, and then sells to wholesalers, which typically don’t move large enough volumes to buy directly from factories.

“We fill a gap in the ecosystem. We facilitate the mills and the wholesalers,” Gary explains. “Now you could say, ‘What do they need us for?’ Well, mills need cash and our wholesalers, we give them credit. So we finance the inventory.”

More than 90% of businesses in the fabrics industry are – like Bru Textiles, which Gary founded with his brother Jason in 1995 – family run and privately owned. “And that’s especially true in terms of distribution,” Gary says.

You have to have a real passion for the product. When a fabric person picks up a piece of fabric, they know where it’s made, how it’s made and how much it costs.

“So we sell to about 600 wholesalers around the world. Of those wholesalers, there are very few who are publicly listed – one or two. And the biggest ones are all privately owned family businesses. That means the grandparents or great-grandparents started them.”

Huge public companies rarely come into the space, according to Gary. “If you want to be in the fabric business, it has to be in your veins,” he insists. “You have to have a real passion for the product. When a fabric person picks up a piece of fabric, they know where it’s made, how it’s made and how much it costs.”

That obsession for the product has helped Gary and Jason turn Bru Textiles into one of the most innovative players in the industry. While many competitors have resisted digitalisation, Bru has been ahead of the curve since the early days of the internet. “Twenty years ago, we bought our own software company,” Gary tells. 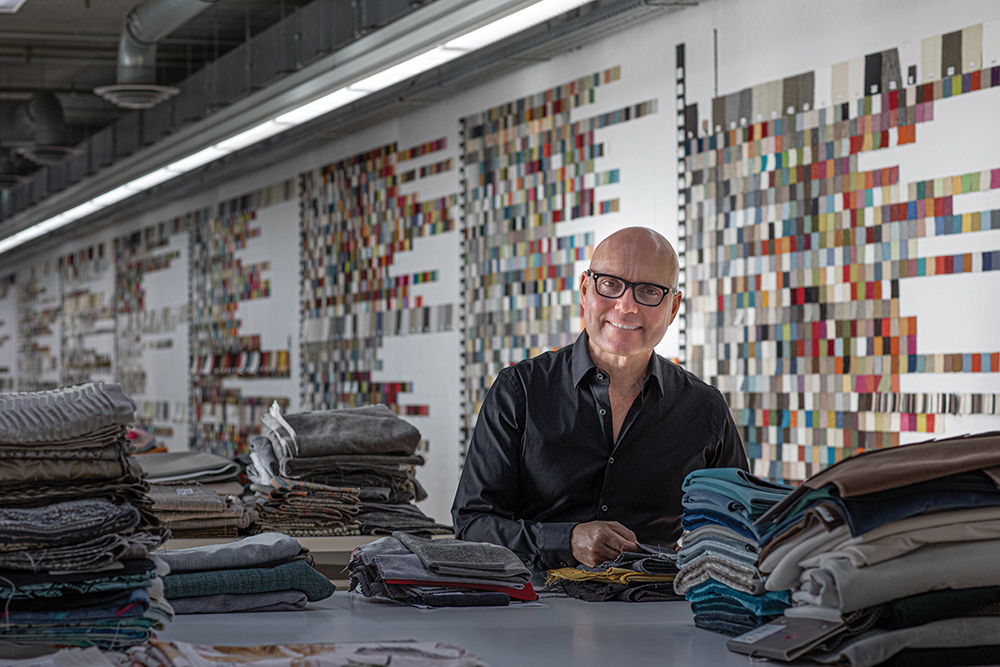 Bru was the first company of its kind to allow customers to browse stock online 24 hours a day, according to Gary. “It used to be secretive in this business, how much stock you had, how much inventory you had,” he points out.

Today, Bru’s digital transformation is becoming ever more sophisticated. The company is now making ‘digital twins’ of its fabrics so they can be rendered as 3D images. To do so, it started a company in Ukraine called Bru Digital, which has now changed its name to Twinbru.

“Why did we start in Ukraine? Because Ukraine has seen huge developments in augmented reality, in 3D technologies,” Gary explains. “Everything to do with digital development, they’re good at because in the former USSR they did all the aerospace stuff. They have some of the highest mathematics scores in the world. There’s a huge university in Kiev. It’s a technology university. We basically started our office on the campus there.”

The digital twins are far more detailed and versatile than a simple visual representation of the fabric. “I’m not talking about just a scan or a photo,” Gary says. “I’m talking about actually making computer-coded fabrics. So every fabric has its own metadata programmed into it, and you can then apply our fabrics on any 3D model.”

The older generation especially are having a lot of stress changing over to digitalisation. I think that’s the biggest challenge in our industry.

The result is a service, showcased on a beautiful website, that allows customers to choose between thousands of fabrics and visualise them as curtains, upholstery or just about anything else, in lushly designed rooms. Gary sees this as a huge improvement on the swatches of fabric samples that the industry has traditionally relied on to showcase its products.

“Just think about it. If you make a sample book – and there are probably stores, designers, architects, millions in that world – even the biggest player in the world will make maybe 5,000 or 6,000 samples,” Gary says.

“So your reach is so small if you’re not digital. By doing it digitally, your reach becomes unlimited. Of course, you have a huge marketing cost to reach all those millions of customers, but still, that’s the way to go.”

While the benefits seem obvious to him, many are reluctant to change in an industry where customers have always wanted to see and touch the product for themselves before buying. “The older generation especially are having a lot of stress changing over to digitalisation,” he concedes.

“I think that’s the biggest challenge in our industry. For them, they’re like, ‘We’re in the fabric business. Why do you want to digitalise? It’s got nothing to do with us.’” Gary couldn’t disagree more. 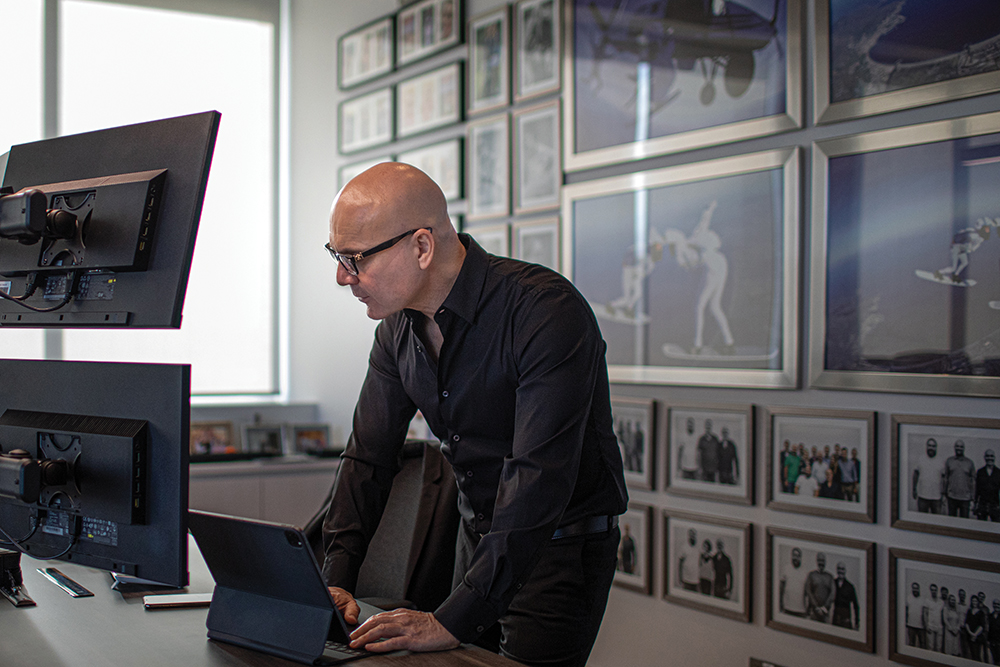 “Today, people are buying cars online. They buy their sofas online. So soon enough, their interiors are absolutely going to be online,” he predicts. “Now, actually, in the lower end of the market, it already is online. The high end will also become that way. The designers and decorators will have to move more online.”

But Gary is confident that technology will soon be able to solve that problem too. “People like Apple are developing screens where you can feel texture – it already exists,” he says.

When that technology comes to market, he hopes having a huge digital archive of fabric will put Bru in good stead to adopt it early on. This digital transformation is just an extension of something Bru has always done. Even back when sample books and photos were the only option, the company was setting itself apart by providing a holistic package to its customers.

“We built our own factory making sample books,” Gary boasts. “None of our competitors had that; maybe they had a room out back just doing it small time, but we built a company with 500 people making samples in China. Our own factory, 100% owned by us. So our customers would come and order from us and they could get the samples as well. And not only did we have the samples, but we also arranged the photography of all the collections.”

The company also built its own quality assurance lab, which saved customers the time and expense of testing the fabrics themselves. And as Bru expanded its global reach, it quickly realised it could offer its customers a low-cost shipping service by sharing the benefits of the economies of scale it enjoyed.

“To our forwarders, our couriers, all of them, we said, ‘OK, we have all these customers. We can give you X amount of volume a year if you can give us the necessary discounts,’” Gary says.

“They gave us the discounts. Then we went to all our customers and we resold them all the freight, all the logistics, and we handed the discounts on to them.”

But Gary and Jason, who is Bru’s CEO, didn’t stop there. Because they sold to a large number of smaller family businesses, they realised they could add credit products to the package of services they offered. Getting credit from banks is especially difficult in the fabrics business “because it’s hard for a bank to value your inventory”, Gary reveals.

“So we added the credit component. We were like a bank – we paid the supplier quickly, and the customers could take a long time to pay us.”

Bru is just as passionate about sustainability as it is about innovating to help its customers. It has built the world’s largest, fully automated robotic fabric roll warehouse, and this facility is completely solar-powered.

“Sustainability is really important for us, not just for the company, but for us personally,” Gary stresses. “So we are developing a lot of new types of products that have sustainable yarns. We have Global Recycle Standard certification. We now also have Organic Content Standard. And we integrate a lot of those yarns into our fabrics.”

The company’s operations in Belgium are also 80% solar-powered, and Bru has pushed its suppliers to adopt the ISO 14001 environmental management standard, which most have already done. 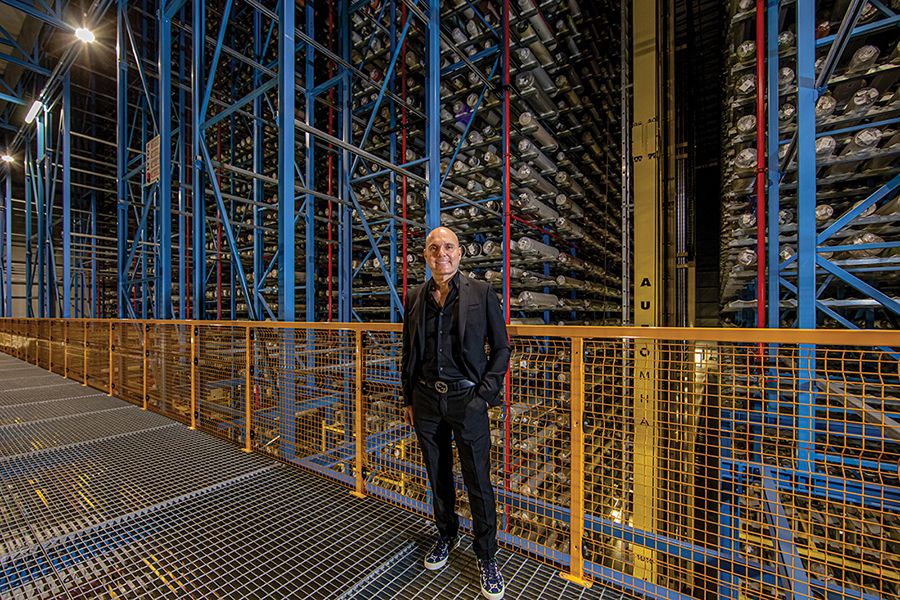 On top of that, its products are OEKO-TEX Standard 100, Gary says, meaning no environmentally harmful substances or chemicals are used in the production process. Bru has also moved into medical supplies in response to the COVID-19 pandemic, and now has a factory in Belgium and another in China making surgical masks.

Together, the factories have the capacity to produce up to 250 million masks per year. BruMed, as the new arm of the company is known, is now awaiting approval from the US Food and Drug Administration. While the crisis originally dealt a huge shock to retailers that reverberated in the fabrics industry, Bru was quickly able to see the potential to make up those losses.

“Because there were so many scandals and shortages of masks, it was easy to get to customers where incumbents used to monopolise, because the incumbents actually let the customers down this time,” Gary recalls. As is evident in the investment it has made into digitalisation, Bru sees great growth potential in the online space for fabrics.

“We have our own office there. We have a wonderful team and are building up that market. So that’s one area that we are very bullish in,” he smiles. The company also services the US market through Bru USA, which it set up two years ago.

Furniture manufacturing is now 8% of Bru’s business, but Gary expects it to rise to 30–40%th. “We are doing very well there,” he shares. “It’s going to become a massive part of our business.”

For Gary and his brother Jason, success like this does not come from making cold, impersonal business decisions, but from fostering an environment of respect, empathy and trust throughout the company and among its stakeholders. The brothers were raised in South Africa during apartheid, while Nelson Mandela was still in prison.

“We didn’t even know who Nelson Mandela was. You know what I mean? He was considered some terrorist who was in prison,” Gary remembers. “I grew up in South Africa in a completely segregated society. I was taught that there was a difference between Black and White. I was taught that everything had to be separated.”

As Gary got older, he says, “I knew it was wrong, and I wanted to get out of there. So when I went to Belgium, it was so nice. There was so much freedom.” He now strives to take the experience he had growing up and use it for good in his own company.

“If you come to Bru today, you come to the ‘united nations’. We have people from around 30 countries, and everybody’s treated equally,” he beams.

Gary believes one of the company’s biggest assets is that “we have empathy. It’s easy to say you have empathy, but if you see our actions, if you see our track record, we don’t have fallings-out. There’s people you like more than other people, like anything in life. But there are no fallings-out – no regrets.” 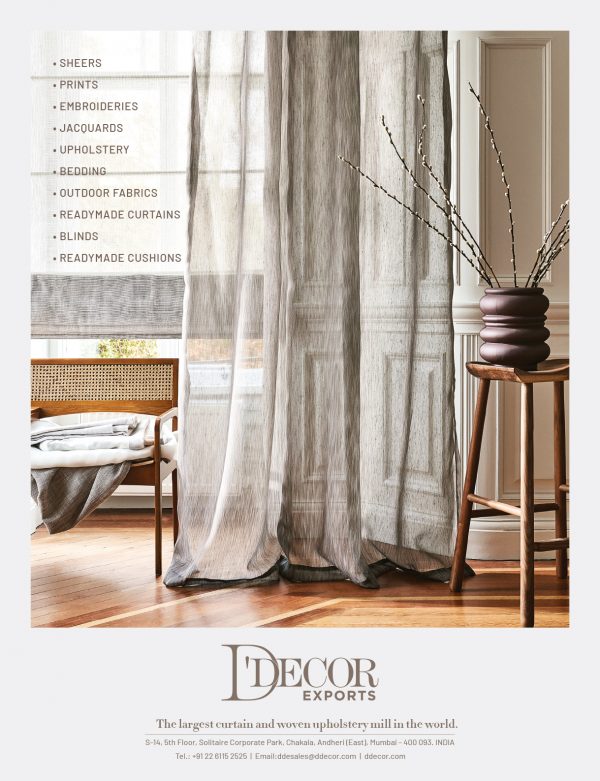 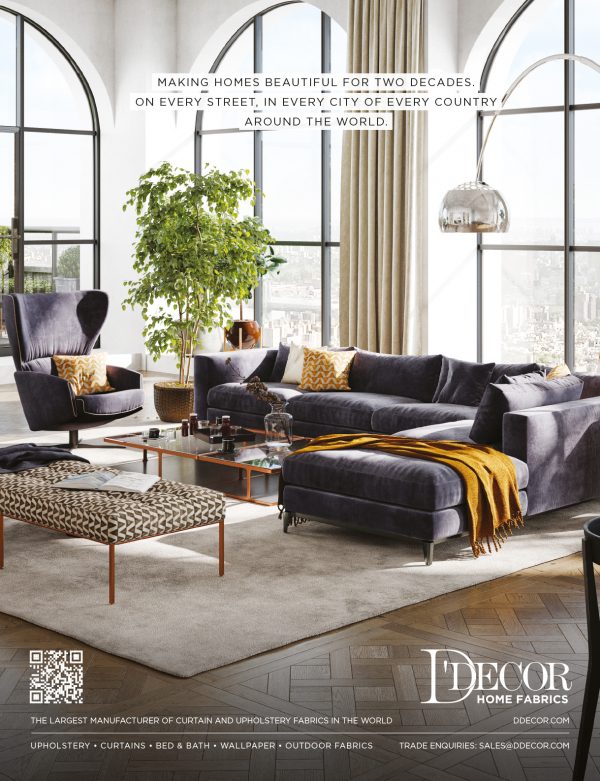 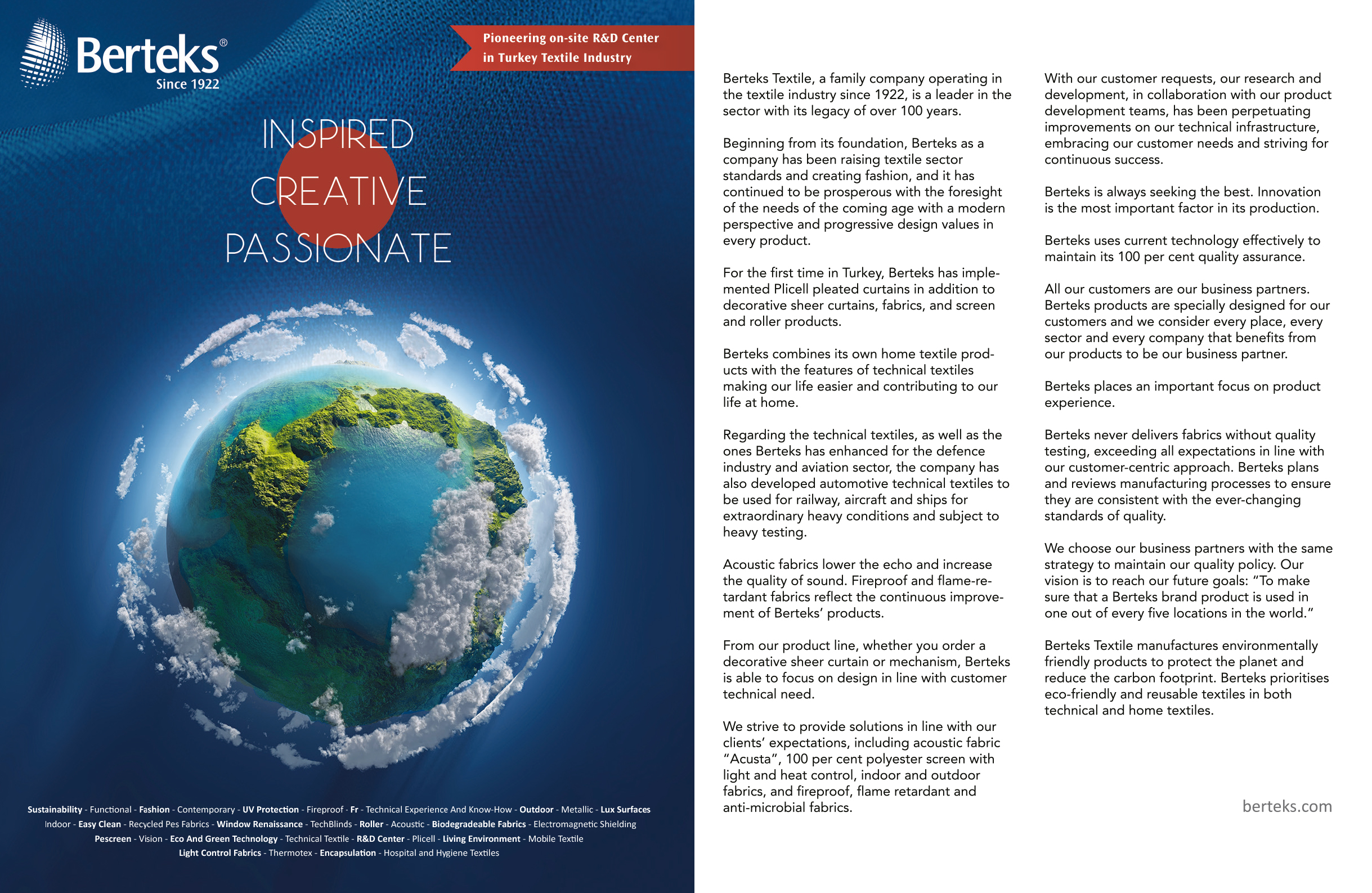