MAG Aerospace CEO Joseph E Fluet III offers a deceptively simple illustration to explain what his company does. He draws a parallel between a young person hired to launch a quadcopter and take a video of their neighbor’s house that is up for sale, for a real estate webpage, and the C4ISR operations that are MAG’s bread and butter. “Command, control, communications, computers, intelligence, surveillance and reconnaissance,” he explains. “It’s an awkward acronym but it describes the process of gathering and disseminating actionable information to customers.”

Instead of the quadcopter in Joseph’s example, MAG uses special mission aircraft, both manned and unmanned, equipped with cutting-edge sensors. And instead of the next-door neighbor, MAG’s customers include government entities – particularly the US Department of Defense – as well as intergovernmental bodies, including NATO and the UN. Finally, instead of the young person hired to operate the quadcopter, MAG has Joseph, enjoying his fourth career and overseeing the extraordinary work that his company does.

I joke when I talk to young people and tell them not to worry about changing jobs, because I’ve had at least four careers in my life,” he tells The CEO Magazine. Joseph joined the army after university, serving as a helicopter pilot for almost nine years, flying in the Gulf War and carrying out counter-narcotics work in Latin America. He left the military for law school in the mid 1990s, remaining in the reserves, and practiced law for a little over seven years, becoming a federal attorney before clerking for a judge in the US Court of Appeals for the Eleventh Circuit. While working for Williams & Connolly in Washington DC, he decided to take a sabbatical and headed to Afghanistan, where he created the Afghan Air Corps’ first Special Operations Aviation Unit.

“When I came back from Afghanistan in 2006, I wanted to try my hand at entrepreneurship.” Retiring from the reserves in 2009, and leaving Williams & Connelly, Joseph started his own law firm, as well as MAG, over the course of a few months in 2010.

“At this point, I’d had three careers: soldier, lawyer and entrepreneur. As MAG grew, one of the things I found interesting about founding and growing a company is that there comes a point when you are no longer an entrepreneur; you’re a CEO. It became apparent to me, as the company grew, that I needed a new skill set; I think one reason many founders don’t remain with their companies is that they may be good entrepreneurs, but they’re not good CEOs. And when your company gets to be a certain size, what it needs at the helm is not an entrepreneur, it’s a CEO.”

“There comes a point when you are no longer an entrepreneur; you’re a CEO.”

Joseph set about learning the skills he thought every good CEO possessed, and his efforts were rewarded with an EY Entrepreneur of the Year award in 2017. He acknowledges that the skills he gained in his previous careers have proved invaluable. In the military, he learned leadership and management skills, and the ability to look at things from a detached and logical perspective. While practicing law, he learned risk management, and developed an understanding of statutes and governing regulations.

“My time as an entrepreneur also makes me a better CEO: it keeps me growth-focused, allows me to not become too timid and, most importantly, gives me the ability to mentor my business unit leads who are now primarily responsible for growing the company.” Crucial to the growth of the company is the quality of its employees, and Joseph describes the acquisition of high-quality talent as “a never-ending challenge”.

“MAG is a tech company and as a tech company in the services business, my products are the people we have.” The company’s talent acquisition team takes an intelligence-type approach to recruitment, he says. “Intelligence operatives work on nodes; they find someone who’s important, and then figure out that person’s network. Our talent people do the same thing; we’ve been very effective at finding someone who has a particular area of expertise, and then leveraging their personal networks to bring in their friends and colleagues.”

The company’s talent acquisition efforts are also aided by MAG’s standing in the industry. “MAG is a special place to work. We have a reputation for being the elite – the ‘Green Berets’ if you will, of ISR. There is a je ne sais quoi that goes with being a MAG professional. We’ve been fortunate, especially given how quickly we’ve grown, to be able to protect our culture; part of our culture is this view that working for MAG makes you elite, makes you special. And it’s true.”

Considering the future, Joseph notes that “the only way you can sustain a high-growth model in a company is to be good at everything”. With “a little bit of a split focus, we’re pushing into areas within the US government, outside the Department of Defense, such as the State Department, Customs and Border Patrol, and other entities that have a significant need for information to base their decisions on. At the same time, we’re seeing a movement internationally towards acquiring information as a service, so we’re also pushing heavily into the international markets – friendly foreign governments and intergovernmentals – which have been a significant source of revenue for MAG.”

“SDI, a defense industry WOSB with 40 years of unmanned aviation experience, is proud to join forces with MAG Aerospace under Joe Fluet’s leadership. We are excited to be part of MAG’s commitment to mentoring small businesses such as SDI.” – Pam White, CEO; and Bob Portney, President, System Dynamics International

While he evidently loves his profession, Joseph finds there’s too much cynicism among his peers. “I’m a huge optimist by nature, but many people get into government services looking for whatever they can get.” Adamant that this is not the case at MAG, Joseph takes a moment to celebrate his company’s achievements to date.

“We didn’t start doing ISR until mid 2011 so, in seven years, MAG has grown to a point where we are bringing in US$400 million in annual revenue. We have 1,500 employees across every populated continent; we offer over 200 aerial platforms and we logged nearly 100,000 flight hours last year. What this team has accomplished is truly extraordinary.” 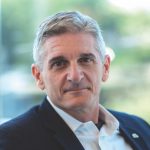