Laurent Delanney, CEO of ATP Europe and ATP Commercial Director, first developed a passion for tennis during his youth. Playing the sport as a child, he never could have imagined that this childhood interest would set the trajectory for his professional career. After college in Los Angeles, in the US, I came back to Europe and after two years working in the family business, which was in womens fashion, I found my way to what was my passionsports and sports marketing.

Thanks to the confidence of the directors at the sports-marketing agency ProServ, which was what it was called at the time, I worked for a number of years, around seven years, at ProServ based in Paris, which is the European headquarters. I was managing professional tennis players, ranging from junior up-and-coming players to superstars like Yannick Noah, who at the time was French Open champion, world number three, and a big star internationally and certainly in France. I also worked on some events including the tournament in Antwerp, which handed out a gold and diamond racket as its trophy. 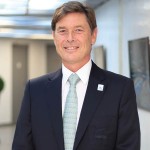