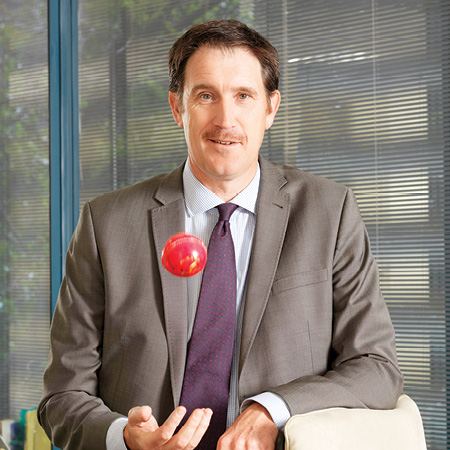 It’s the early 90s, Paul Keating dominates the front bench in Parliament House, the IOC confirms Sydney will host the 2000 Summer Olympics, and the Australian Cricket Team is thrashing England in the Ashes year-on-year. Meanwhile, on a sun-drenched St Kilda cricket ground, a young James Sutherland is making his first-class debut in a match for Victoria against Queensland.

A right-arm, medium–fast bowler, and a commerce graduate from the University of Melbourne, for years James balanced his love of playing cricket along with a full-time chartered accountant gig. “I had 5 years with Ernst & Young, and they were a great supporter of me in allowing these concessions to pursue both lifestyles,” says James. The young paceman performed strongly on the field as well as in the office, managing to claim wickets on big names like Carl Rackemann, Justin Langer and Steve Waugh, while also dismissing the likes of Stuart Law and Ricky Ponting.

Despite this, James hung up his cricket whites early in his career and pursued a role in finance management for the Carlton Football Club after working with them as one of his clients at Ernst & Young. Through Carlton, James was able to continue to pursue his love of sport on and off the field, becoming a Level III coach and being appointed assistant coach of the Victoria cricket team in 1998, along with a stint as coach of the Melbourne University Cricket Club. That same year marked when he first joined the Australian Cricket Board, now better known as Cricket Australia, as general manager of commercial. 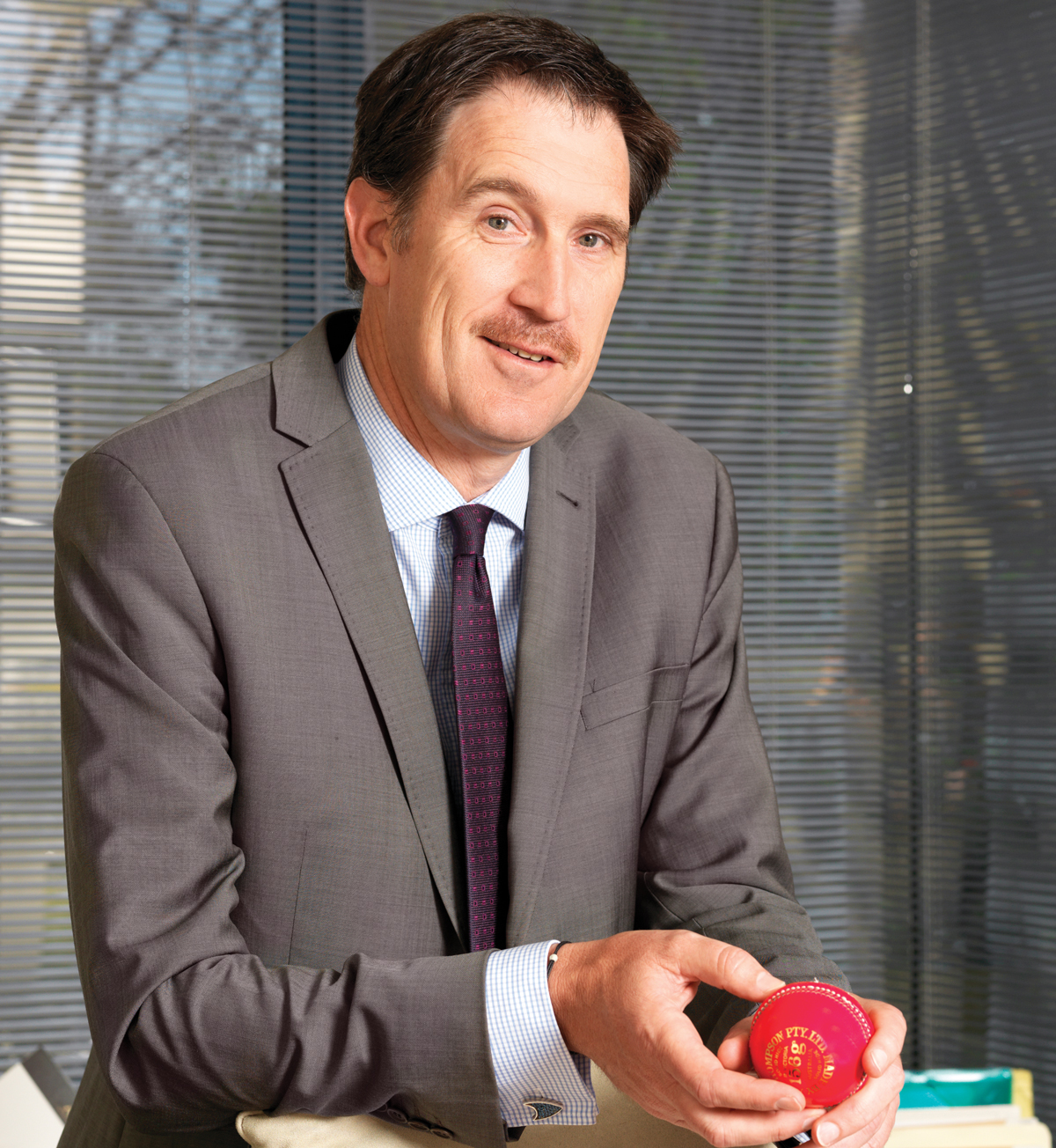 “My initial role here was effectively CFO, but I also managed certain parts of the business, including the relationship with the players through our collective bargaining agreement,” says James. “As a former cricketer with a financial and commercial background, the execs of the day thought I’d be a good fit for the role.”

It was only 3 years later that James was asked to step in as the next CEO of the organisation to replace departing leader Malcolm Speed, who went on to become the new CEO of the International Cricket Council. “I was as surprised as anyone when they offered me the job,” says James. “I’ve been here more than 15 years now. I was fortunate to take over from a very good CEO who had done a lot of work in helping the organisation to understand itself and its role in the Australian sporting and entertainment industry.”

Since that time, there’s been no typical day in the life of James Sutherland. Becoming the corporate face of one of Australia’s most notable organisations has unsurprisingly thrust James into the spotlight, presenting myriad business, sport and people-based challenges, ranging from the humdrum to the vastly unpredictable. “It keeps you on your toes; that much was clear from day one — no day ever turns out how you think it will,” James says.

“At the same time, it’s a fantastic environment and I consider myself very fortunate to be able to combine my passion for sport and cricket with my professional background.” During his time as CEO, the Australian men’s and women’s national cricket teams have enjoyed many victories, including the men’s World Cup in 2003, 2007 and 2015 and the women’s World Cup in 2005 and 2013. James has also been closely involved in a number of strategic initiatives to better the organisation, including the 2011 Australian Team Performance Review, which has led to many reforms in Australian cricket’s governance and performance management, as well as its financial model. He has also guided a comprehensive review of Australian cricket’s strategy. “Diversity is really important for us. There is some stigma attached to the game as being a boys’ club, which we are definitely trying to change.” – James Sutherland

“We’re always trying to balance that rich history and heritage with the new trends and needs we see in the marketplace,” he says. In doing so, however, the strength of cricket’s heritage is also a double-edged sword, as many traditionalists might be averse to change. But this hasn’t hindered efforts to do so, says James. “The nature of our country is changing all the time, and our responsibility is to ensure that cricket is popular and relevant to the next generation of Australians, not just the current one or indeed the previous one,” he says.

“To that end, we’ve introduced innovations to the game that haven’t necessarily come naturally, but we’ve pushed ourselves into it in the belief that we’re ensuring the next generation will develop a passion for the sport.” These innovations include new games and sporting styles, such as the Twenty20 Big Bash League, which has successfully attracted many new families and kids to cricket, for which James negotiated a partnership with KFC and Nine Entertainment Co. In 2013, he also led negotiations on Australian cricket’s major new telecast contracts (both domestic and international). 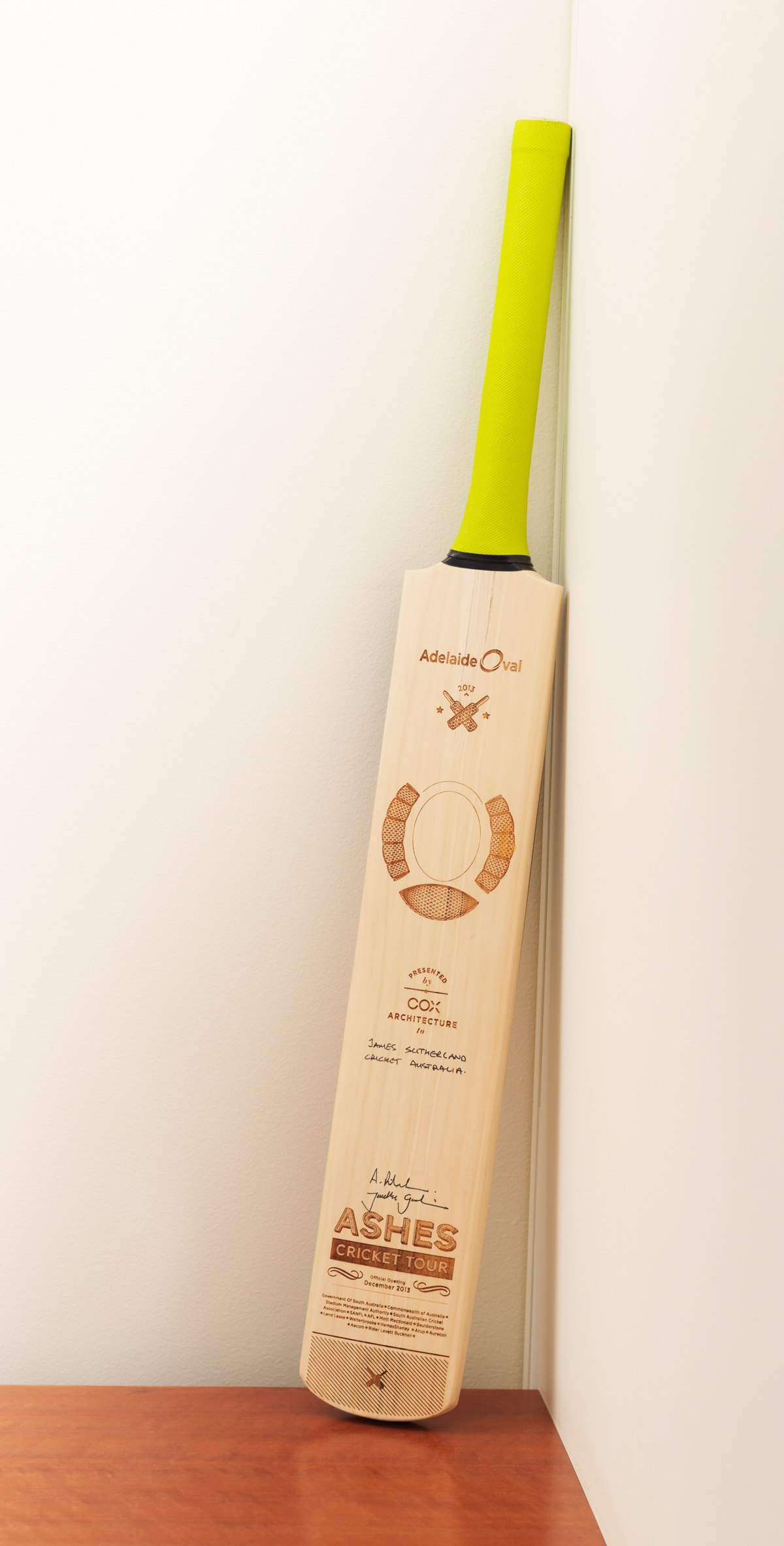 As a board member of the Local Organising Committee, James was responsible for staging the 2015 ICC World Cup, which attracted a global audience of more than 1 billion TV viewers when played in Australia and New Zealand. Last year, Cricket Australia also hosted the world’s first-ever day–night test to allow greater engagement with Australians who otherwise couldn’t embrace a full 5-day game due to work and school commitments.

“These have been challenging but also hugely successful in attracting new fans to the game, and it continues to be about that. It’s great if traditional cricket fans like the Big Bash League, but if they don’t, we’ve got no problem with it because it’s not about them,” adds James, very matter-of-factly.

A sport for all Australians

In the past few years, James has also spearheaded an increased focus on women’s cricket, encouraging more women and girls to take part in the sport, stressing the importance that to truly call cricket “Australia’s favourite sport” it needs to be “a sport for all Australians”. “Diversity is really important for us, and there’s some stigma attached to the game as being a boys’ club, which we are definitely trying to change,” he says. This year Cricket Australia launched a grants program for cricket clubs, schools and associations to sponsor and support the establishment of girl teams, and received an overwhelming response, requiring the board to significantly increase the money provided. “We ended up putting $1 million into these grants to help the establishment of these teams, and we’re really starting to see some traction,” says James. “Hand in hand with that is also our women’s team, the Commonwealth Bank Southern Stars, who are ranked number one in the world in Test cricket, One-Day cricket and T20 cricket, and we want to keep them on the same pedestal as our men.”

In 2015, the organisation also launched the annual Women’s Big Bash League, supported by Channel 10. “Women like Meg Lanning, Ellyse Perry, Alyssa Healy and Alex Blackwell, they are champion cricketers, they are great role models, and they are people that young girls can and should aspire to be like,” adds James.

Also notable was the celebration of the 150th anniversary of a historic cricket match between Melbourne Cricket Club and a leading Indigenous cricket team, the Aboriginal XI, on Boxing Day 2016. The latter became the first-ever Australian sporting team to travel overseas, touring England in 1868.

“We had a celebration of that at the Boxing Day Test match, and as an extension of that will be sending Indigenous teams to tour England in 2018.” The continuing diversity efforts of Cricket Australia fall into James’s ideal strategy of using cricket to unite and inspire all Australians, which makes him ever more passionate about keeping the sport alive.
“Cricket brings people together. There are a lot of Australians out there who are passionate about cricket, and we want to continue to nurture and grow that passion,” says James. “We want to find more people who can develop a love and appreciation of the game, because ultimately, that’s what’s going to ensure cricket’s sustainable future.” 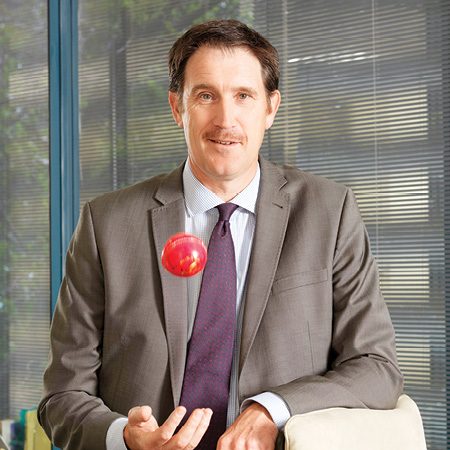