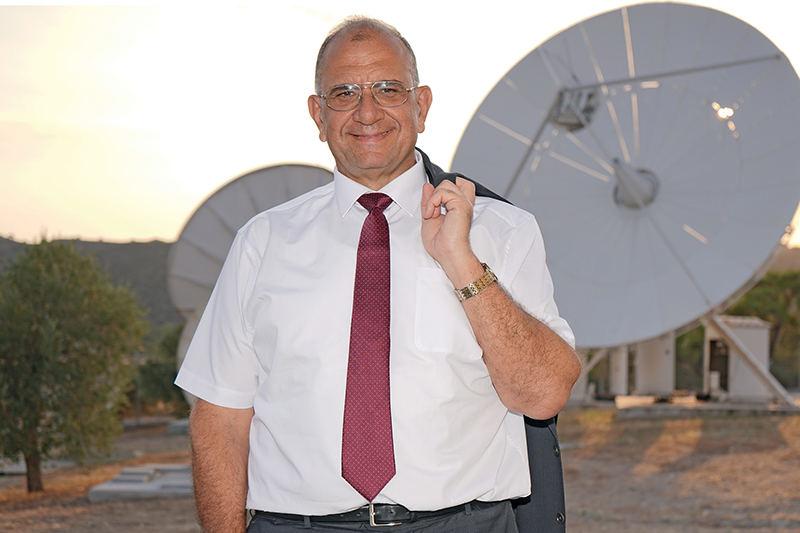 On the evening of 5 February 2019, an Ariane 5 heavy-lift rocket was launched from the Guiana Space Centre in French Guiana carrying a 10,000-kilogram payload that included two new satellites. One of these was the Hellas Sat 4, owned by the Greek-Cypriot satellite operator Hellas Sat.

A little more than 27 minutes after take-off, Hellas Sat 4 was separated from the rocket and successfully deposited into geostationary orbit at a longitude of 39° East, where it remains today.

It provides telecommunications capabilities including video, data and secure communications to more than three million households in the Middle East, South Africa and Europe. Hellas Sat 4 also serves as expansion and backup to its predecessor, Hellas Sat 3, which was launched in 2017 into the same orbital slot.

According to Hellas Sat CEO Christodoulos Protopapas, these two satellites form the foundation of the company’s strategy for navigating a quickly changing market. “For us, sustainability means to meet the present needs and expectations of the market,” he says.

“Through the highly available satellite services offered by Hellas Sat 3 and Hellas Sat 4, we can withstand any other competition in our market in Europe, the Middle East and South Africa. This is our bible for sustainability and growth – to be flexible with our business model and to withstand the competition in the market.”

A significant source of competition for geostationary orbit (GEO) satellites today is the development of low-Earth orbit (LEO) satellites. GEO satellites hover around 35,000 kilometres above Earth and follow its rotation at a fixed point to provide coverage to a specific area on the surface below.

LEO satellites, on the other hand, fly at high speeds between 160 and 2,000 kilometres from Earth, providing continuous global coverage. LEO satellites have a shorter communication time lag, as the distance a signal must travel between Earth and the satellite is much shorter than for a GEO satellite.

However, GEO satellites possess several advantageous qualities; for instance, their static position at a fixed point in the sky, which eliminates the need for ground stations to have movable antennas.

As Greeks, there is this neutrality of civilisations in our character, so we can have both business and personal relationships with people from different civilisations, different countries and markets.

Nonetheless, advances in LEO satellite technology have contributed to the devaluation of several GEO satellite operators in recent years, increasing the cost for the customer and forcing the remaining operators to adapt.

With so many LEO satellites flying, the antennas may be unable to manage the continuous handoffs between the satellites making it prone to communication outages which is unacceptable in cases of voice or video. 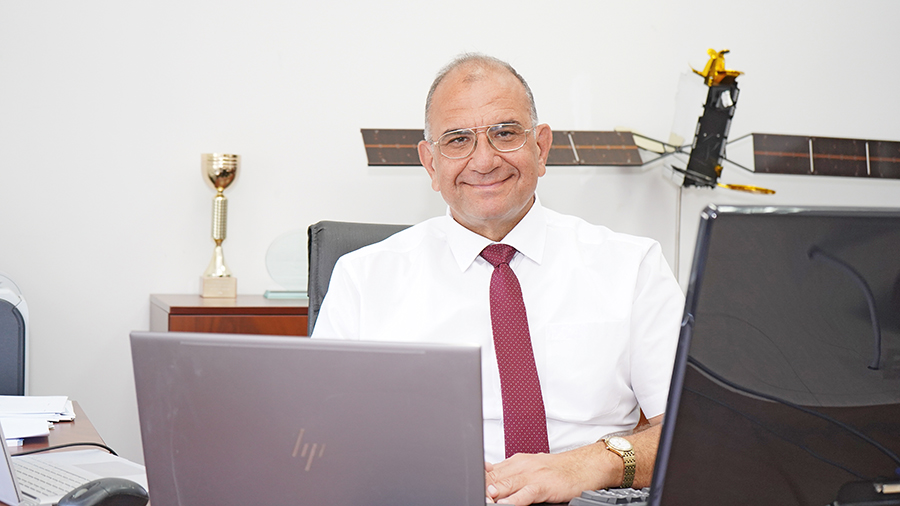 “The new challenges we face come from lower orbit satellites (LEO and MEO). You can see the recent reports of bankruptcy filings by big GEO satellite operators. This currently creates a very strange environment for us at Hellas Sat,” Christodoulos says.

It offers teleport services, hubs and TV platform services from its sites in Greece and Cyprus. Moreover, Hellas Sat is forging new partnerships with DTH providers covering maritime industries including fisheries, superyachts, other large ships, and oil and gas platforms.

“Now, with the Internet of Things and with the autonomous ships, and also with the demands from subscribers to have internet access everywhere – be it from inside aeroplanes, cruise ships, superyachts or fishing vessels – our efforts are to focus on increasing our data service portfolio,” Christodoulos says.

“Over the coming months, our plan is to move even more strongly into this sector of the business.” Hellas Sat has also recently launched services to DTH providers in southern Africa. “The market in Africa is very competitive,” Christodoulos says.

“It’s very strange because with coronavirus now and the new economic crisis, many countries are facing problems in Africa. But we, like other satellite operators, have been able to survive and expand.”

Christodoulos’s path to the helm of the Greek-Cypriot satellite industry was hardly a straight one. After his training in electrical engineering at the National Technical University of Athens, he was made head of the Computer Department of the State Scholarship Foundation of Greece.

There, he wrote several international academic publications on intelligent systems and participated in seminars in Cyprus and beyond where he presented new technologies in information systems and communications.

In 1989, Christodoulos became Assistant Engineer for the Electricity Authority of Cyprus and the following year, he was appointed Technical Advisor to the Archbishopric of Cyprus, a job in which he created the O Logos radio and TV station, where he also served as Director General from 1995 to 1999. 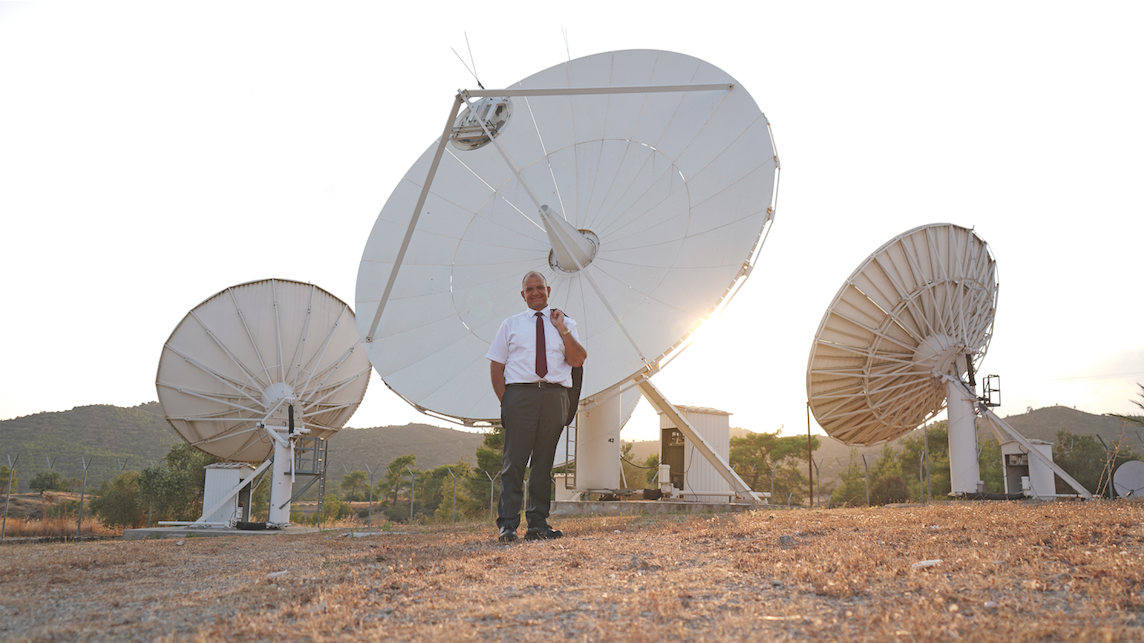 In 1994, the government of Cyprus appointed him to the country’s space committee and, in 1995, he set up LogosNet, Cyprus’s first internet service provider. In 1999, he became Technical Advisor to the Alpha TV Group in Greece before leaving to lead Hellas Sat when it was founded in 2001.

Since then, Christodoulos has succeeded in assembling a formidable line-up of partners, who have helped cement Hellas Sat’s essential place in the economies of Greece and Cyprus, and in the international space industry.

At Lockheed Martin’s facility in Sunnyvale, California, Hellas Sat 4 underwent a series of tests to simulate the launch and space conditions, including acoustic and vibration testing, vacuum and extreme temperature testing, along with radio frequency compatibility and performance testing to ensure the payload would meet critical performance expectations.

These rigorous tests ensured the integrated satellite would both work properly and survive the harsh conditions of space.

“We’re going to be working with Lockheed Martin for the next 23-plus years, at a minimum,” Christodoulos says. Other partners he has recruited to be part of Hellas Sat projects include GMV, Thales Alenia Space and the European Space Agency, the latter of which is helping design Hellas Sat 5, a new geostationary satellite currently in development. Hellas Sat also partners with other satellite operators, hosting their antennae and providing other services for them.

“We don’t compete with the other satellite operators,” Christodoulos says. “As Greeks, there is this neutrality of civilisations in our character, so we can have both business and personal relationships with people from different civilisations, different countries and markets.” 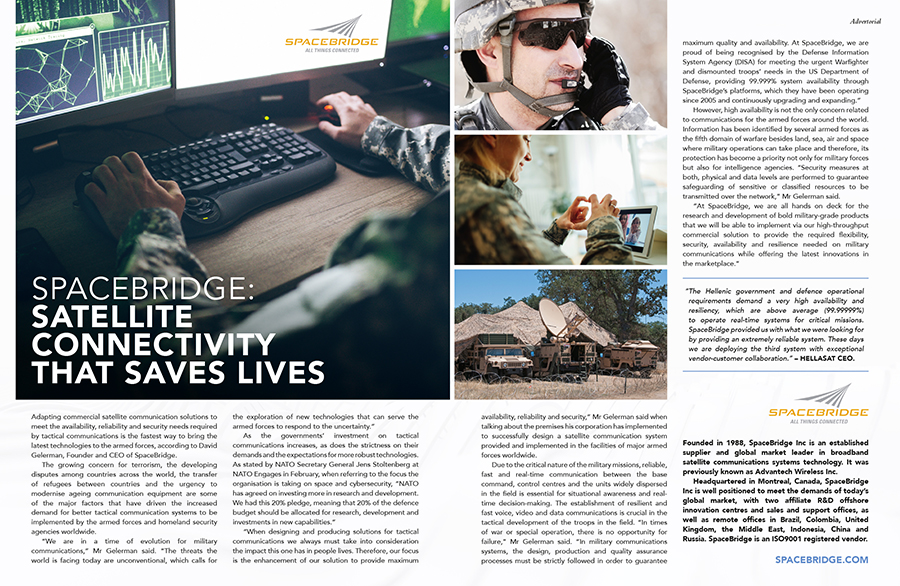