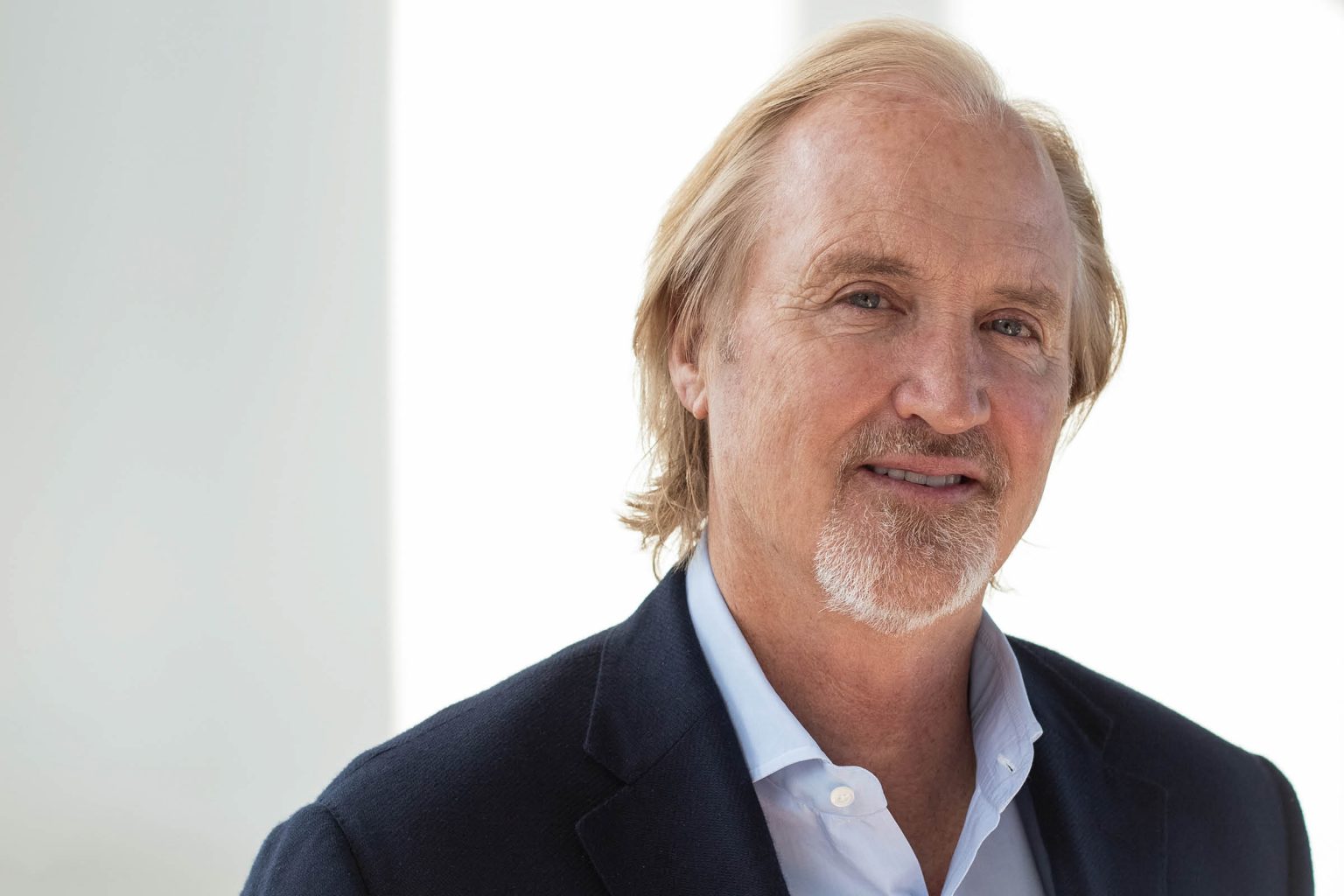 Digital connection is no longer optional in the modern world. But what if you don’t have the resources to access a decent internet connection or simply can’t get online at all? It’s a disparity that Belgian telecommunications company Telenet is on a mission to eradicate, with CEO John Porter driving the charge. 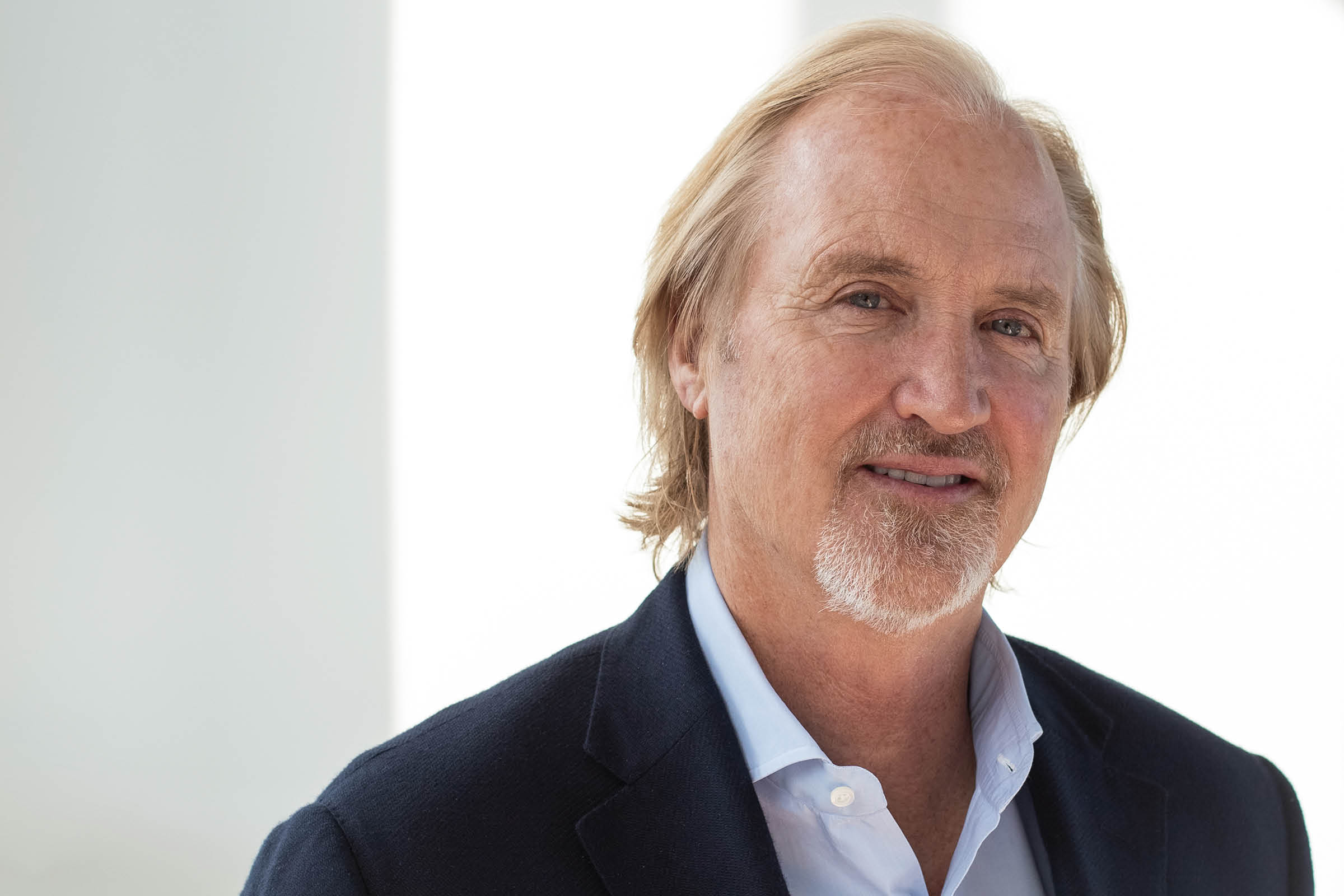 “The digital gap has become even more pronounced because people’s reliance on connectivity has increased dramatically during the pandemic, whether you’re doing your schoolwork from home, looking for a job from home or working from home,” John tells The CEO Magazine. “You need that digital connection. It’s no longer an option; it’s a lifeline.”

However, not everybody has the luxury of reliable digital connectivity, perhaps due to a lack of financial resources or simply the know-how to get the connection they need. That’s why, at the start of the pandemic, Telenet made the commitment to ensure that nobody in Belgium would be left behind – everyone would be able to work or learn from home.

The company started with school children, initiating a digital voucher program for schools to distribute to those students who needed it, enabling them to access an online connection.

On top of that, it gave its financial backing to a scheme that has provided more than 15,000 laptops to school children since it began. But John fast came to realise that this was just the tip of the iceberg.

“Since then, it’s become clear that this isn’t just a kid issue; this is also an adult problem and a family problem,” he reflects. As a result, Telenet has teamed up with a number of social organisations in Belgium that can identify the families and homes who are in need when it comes to bridging the “digital gap”. 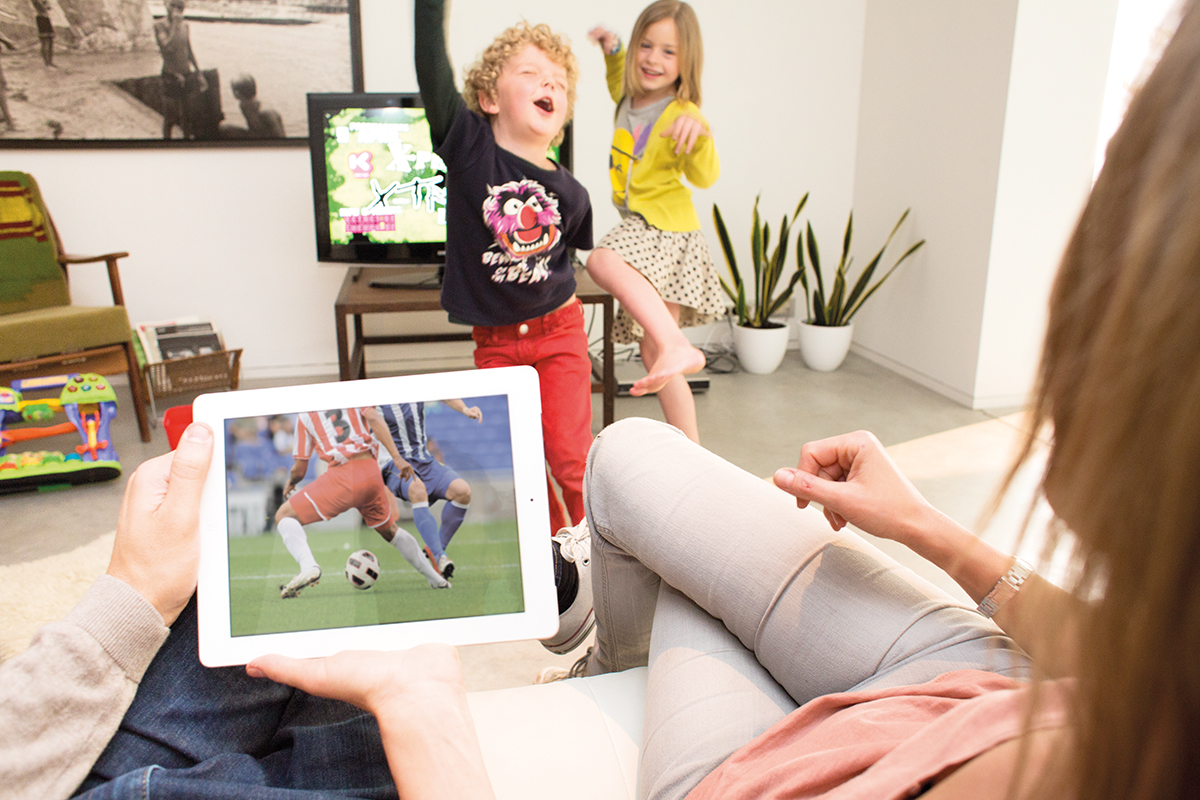 This commitment to the local community, demonstrated by the implementation of this inspiring program, is entrenched within Telenet’s DNA, according to John. He points to the company’s origins in the villages, cities and towns of Flanders, a Dutch-speaking area in Belgium’s north.

With yellow the colour of Flanders, he says it has “yellow blood” – a sign of its sense of belonging to those who played a part in its rise to success. “Our employees take a great amount of pride in their work and are enormously engaged with our organisation,” John says.

“We in turn, as the leaders, are enormously engaged with our people and with the communities they come from. “As a listed BEL 20 company here in Belgium and as a company that has invested billions in its network, and has a very deep relationship with society at large, we think we have a role to play.” 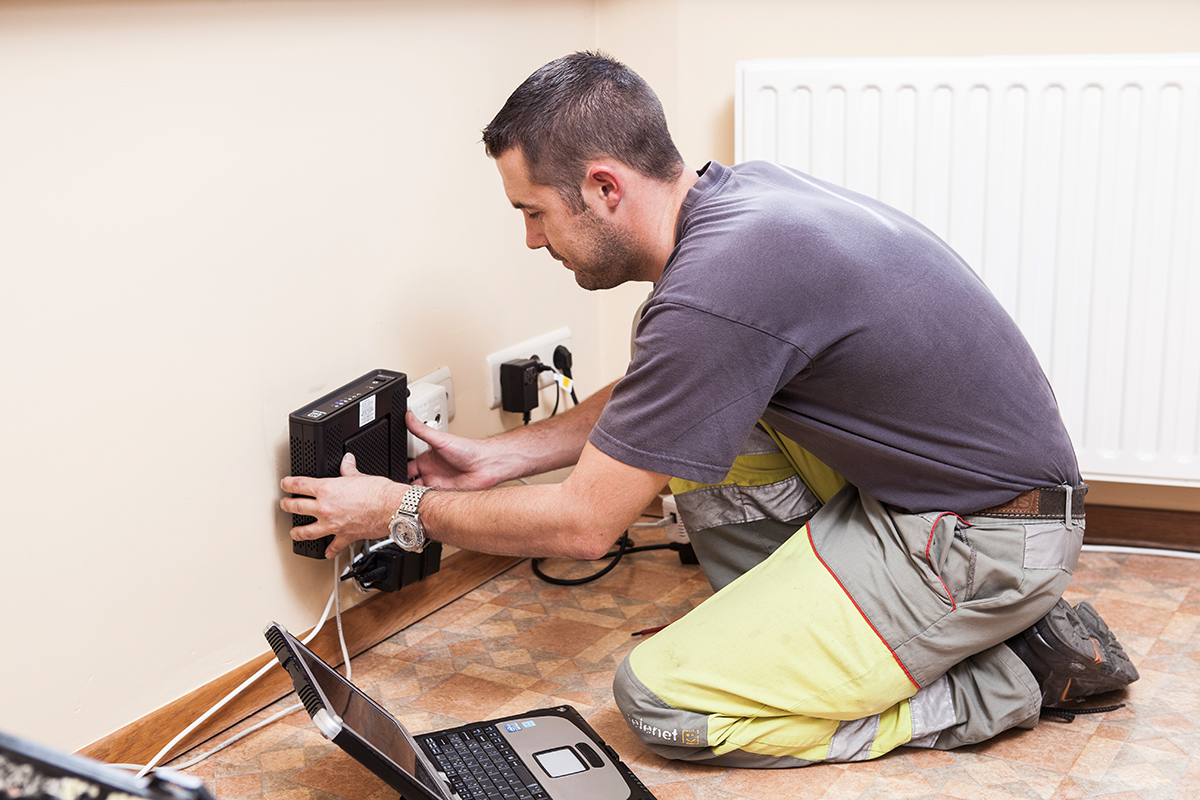 This amazing culture presents the company with an incredible platform for “doing good” in the form of initiatives like the school program or its Digital Acceleration offering.

This sees digital specialists, along with members of its own workforce, provide free consulting services to small businesses to help them get online, or to families and consumers to enable them to better utilise applications and connectivity.

This service was particularly popular as Belgium went into lockdown, and people wanted to ensure that those like the elderly would still be able to stay connected. “Where we see an opportunity to provide a richer experience for people in the community, we do it,” John insists.

“We don’t just do it as a company initiative; our people do these things organically. It’s the kind of company we are. This is a company that has just got culture coming out of its ears, and I think our culture really defines us, but it’s also what separates us from the pack.”

As I surveyed the landscape of companies where I had an opportunity to work, Telenet really stood out to me as a company with a unique culture.

The company’s values were a large part of the appeal for John when he was looking for a new position after what he likes to call his “gap year”. This followed his departure from Australian paid TV platform AUSTAR in 2012 upon its sale to Foxtel, a joint venture between News Corp and Telstra. Before that, he worked at Time Warner in the US.

“As I surveyed the landscape of companies where I had an opportunity to work, Telenet really stood out to me as a company with a unique culture,” he says. “It stood out to me as a progressive company, one that was really taking a leadership position in its own market, but also in the industry in terms of strategy, technology and organisation.”

John joined the company as CEO in 2013 and has taken it from strength to strength during increasingly uncertain times. Telenet currently holds more than 60% of market share in broadband and video in Belgium.

“We like to think of ourselves as the incumbent in terms of market share, but with a challenger mindset,” he adds. In mobile and business to business, it remains an “attacker”, with rival Proximus holding the majority share of the B2B market, a position strengthened by its acquisition of Mobile Vikings and Jim Mobile for €130 million, announced late last year. 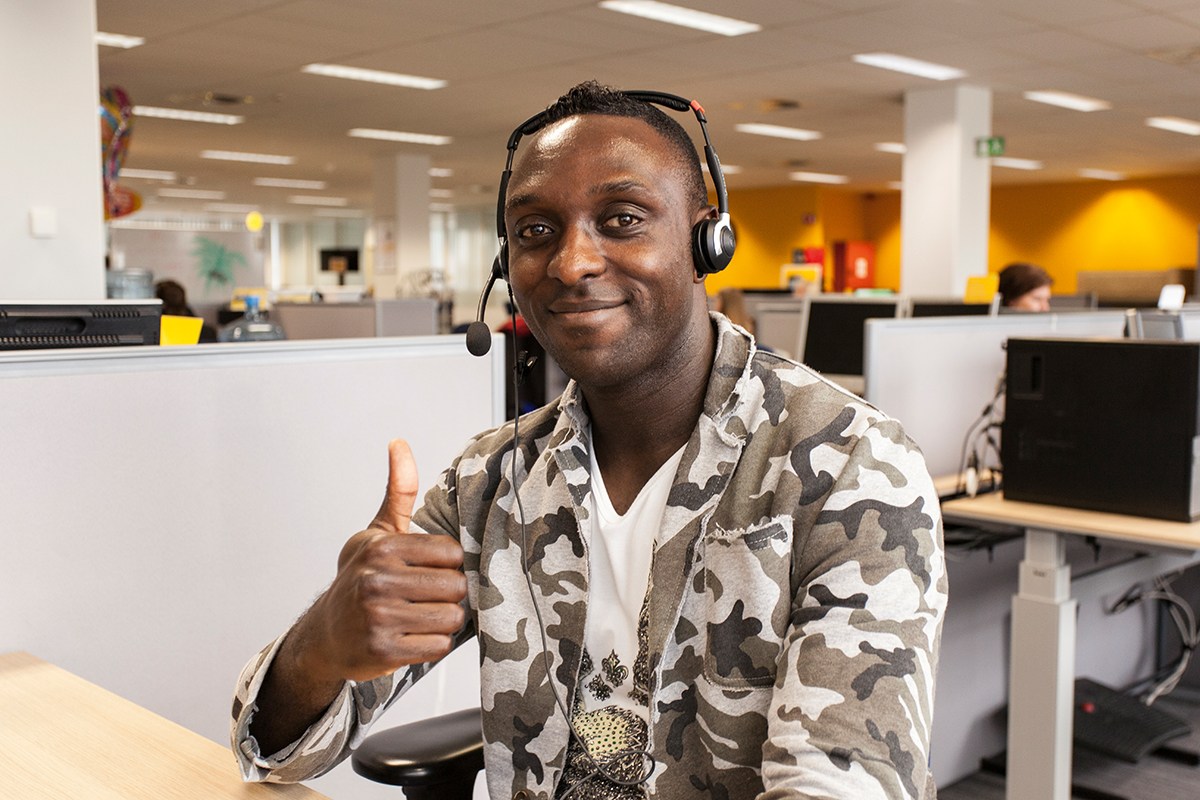 Keeping lean and nimble is therefore essential, according to John. To this end, the company has undergone two major transformations over the past The new system also gives Telenet the ability to leverage cutting-edge digital technologies such as artificial intelligence as more customers reach out using self-service, digital and social media methods.

“Communication does not involve walking into a store or picking up the phone as much as it used to. That still exists, but we certainly have an opportunity to be best in class in terms of our digital interface with customers with this new CRM platform,” he suggests.

Embarking on this digital transformation of the company also helped John realise that Telenet’s organisational structure no longer fit the bill – leading him to commence the company’s second major transformation.

“The classic organisational hierarchy would no longer fit the purpose, so we have aggressively moved into a scale agile operating model,” he says. One half of the company now uses the new model, tackling unique business challenges with end-to-end responsibility. 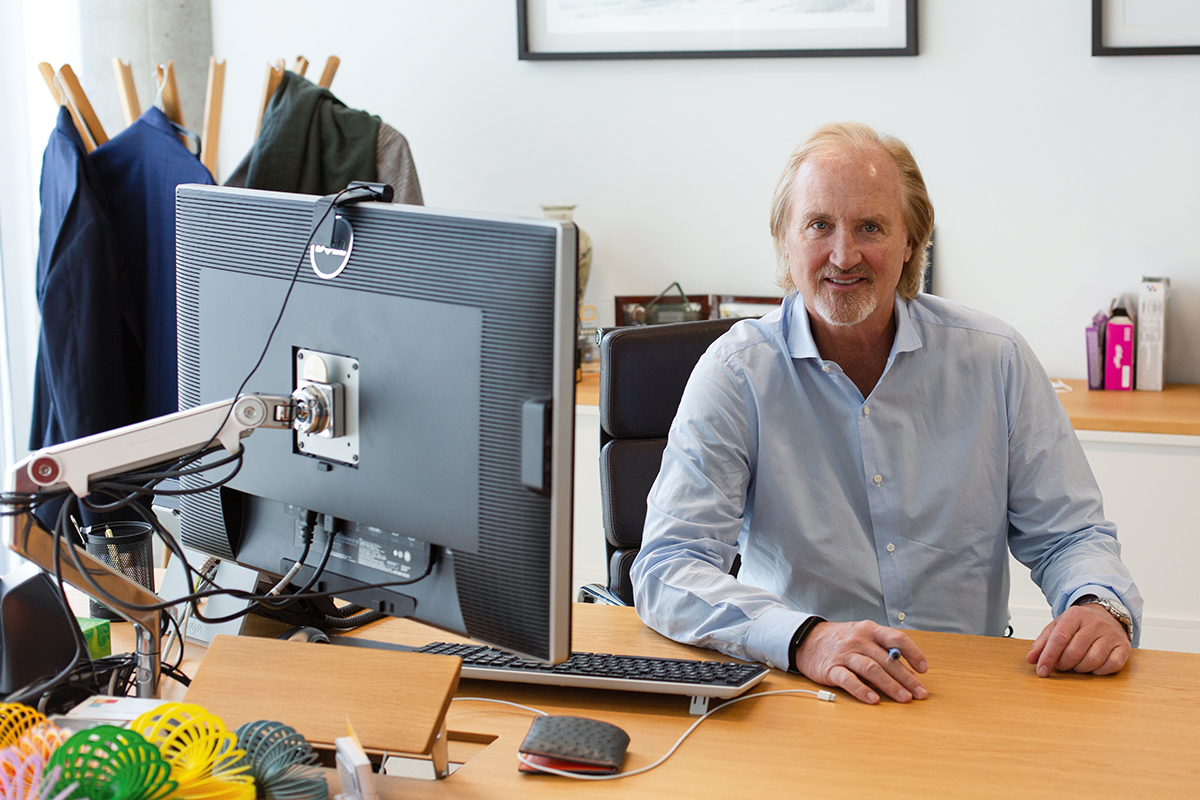 The cross-functional teams see technology specialists such as DevOps engineers work closely with businesspeople such as product architects or market solution specialists.

He says it’s all about give and take. “Our partnerships are good examples of how we can come up with some real creativity and innovation to do better for our customers and for ourselves at the same time,” he confirms. 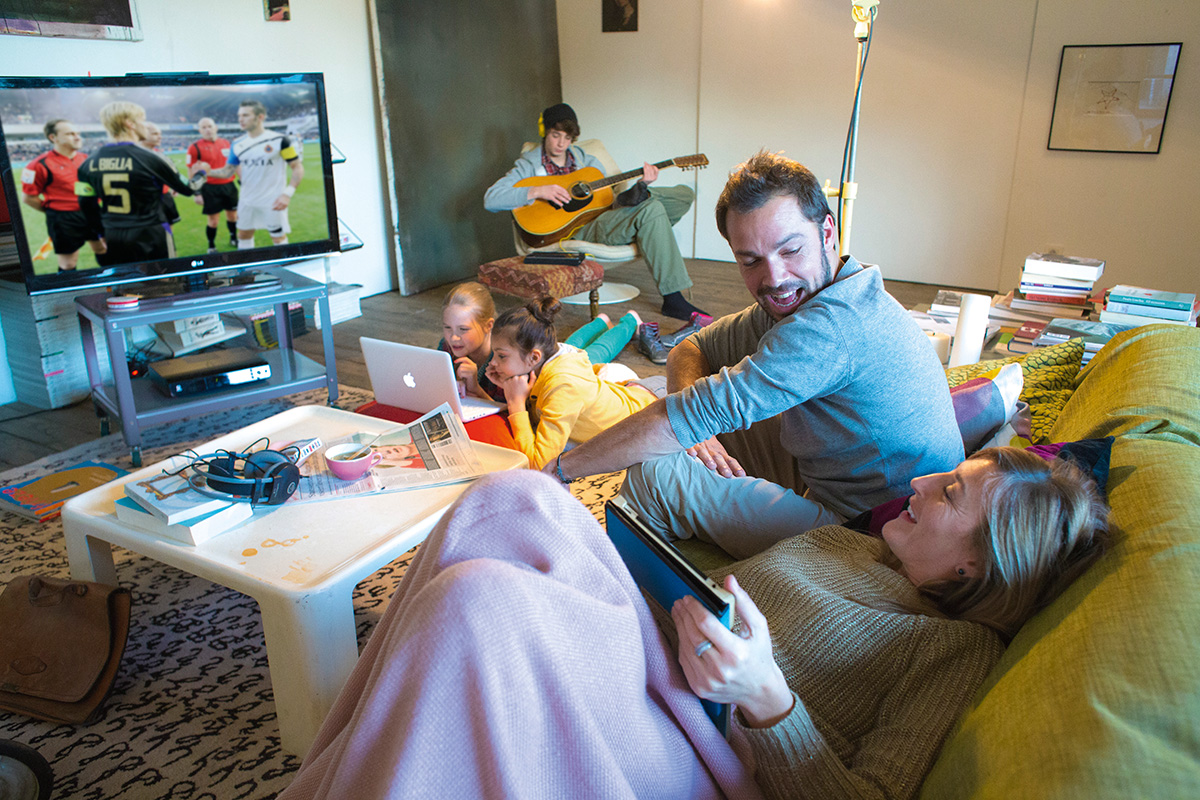 “Whether it’s changing technology or shifting customer expectations, we’re just going through an enormous amount of change.” Telenet’s high-quality network has historically enabled it to win majority market share in a small yet mature and highly competitive market.

Innovation has since helped the company maintain that position by driving it to become first to market with products like high-speed broadband, digital TV and fixed mobile convergence – essentially one phone number that can reach you wherever you are.

We’ve always been a market leader in innovation and we will continue to be that.

“We reinvented the mobile market by simplifying our offering down to two very simple products: good and best,” he quips. This is no idle boast. A study of the quality of Belgium’s mobile networks by the telecom regulator BIPT revealed the Telenet offering is the fastest when it comes to downloading, with an average download speed of 99.5 megabits per second.

It also came out on top for the voice quality of a telephone call, with 99.9% of calls made using its network running “flawlessly”. Nonetheless, John acknowledges the shifting landscape is absolutely forcing Telenet to evolve, in more ways than one. 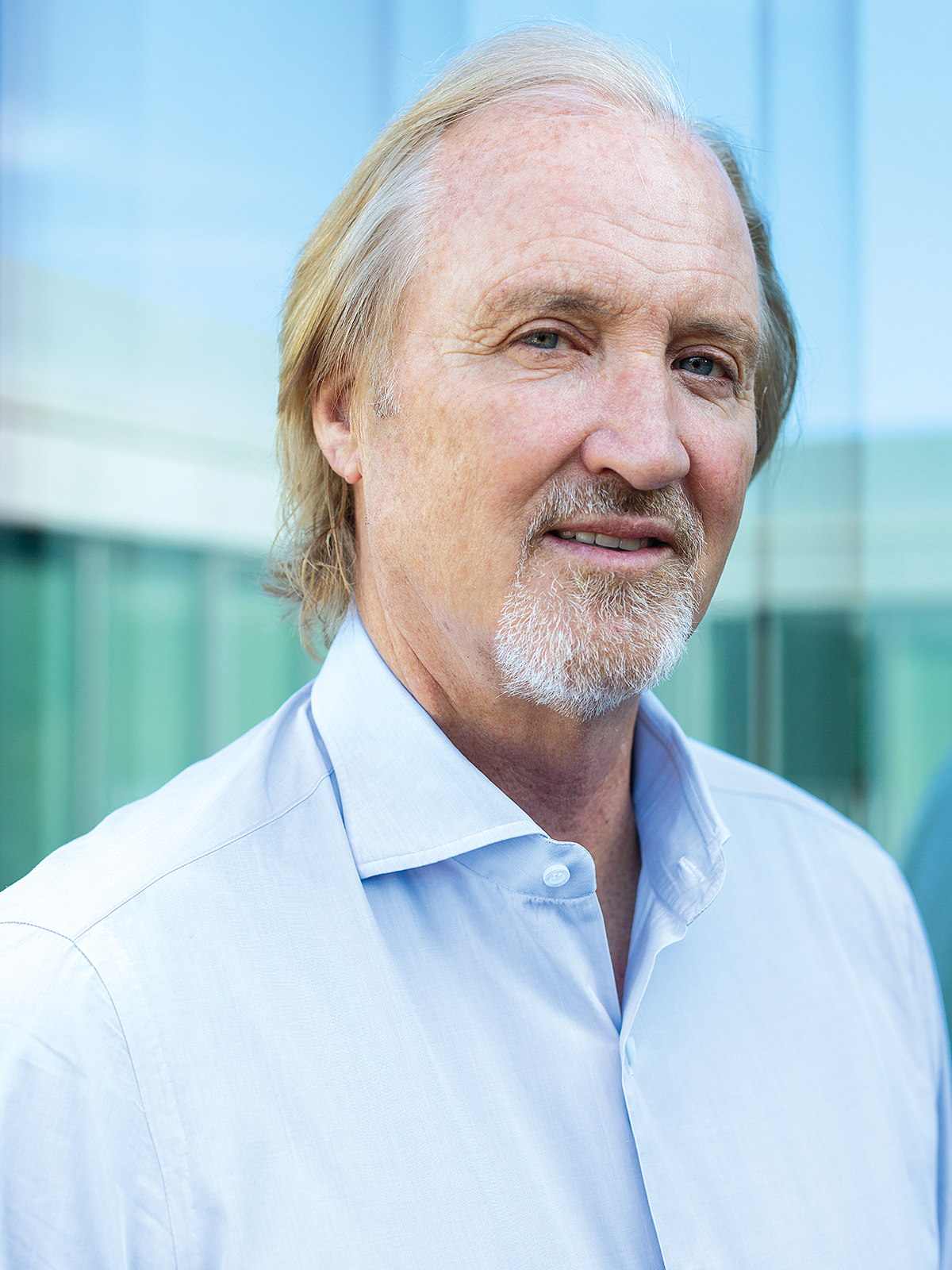 The past decade has seen international subscription streaming services launch in Belgium, although they have had their work cut out locally due to the complicated state structure and different language communities. The way people have traditionally consumed media in the country also poses difficulties for any challengers to the status quo.

Around 90% of the population subscribes to a paid TV service, just 15 years after digital TV was first introduced, with cable’s dominance as a mode of TV distribution dating back to the 1960s.

However, the new contenders are certainly gathering force, with John admitting that the video market has been “turned on its head” by the arrival of disruptors like Netflix. In addition, industry regulators and changing consumer behaviour have also had a dramatic impact on business.

“The challenge is not to be disintermediated by everybody else who is trying to get a piece of the pie here,” he concedes. “How do we live up to that responsibility and at the same time continue to get a return on our invested capital?” 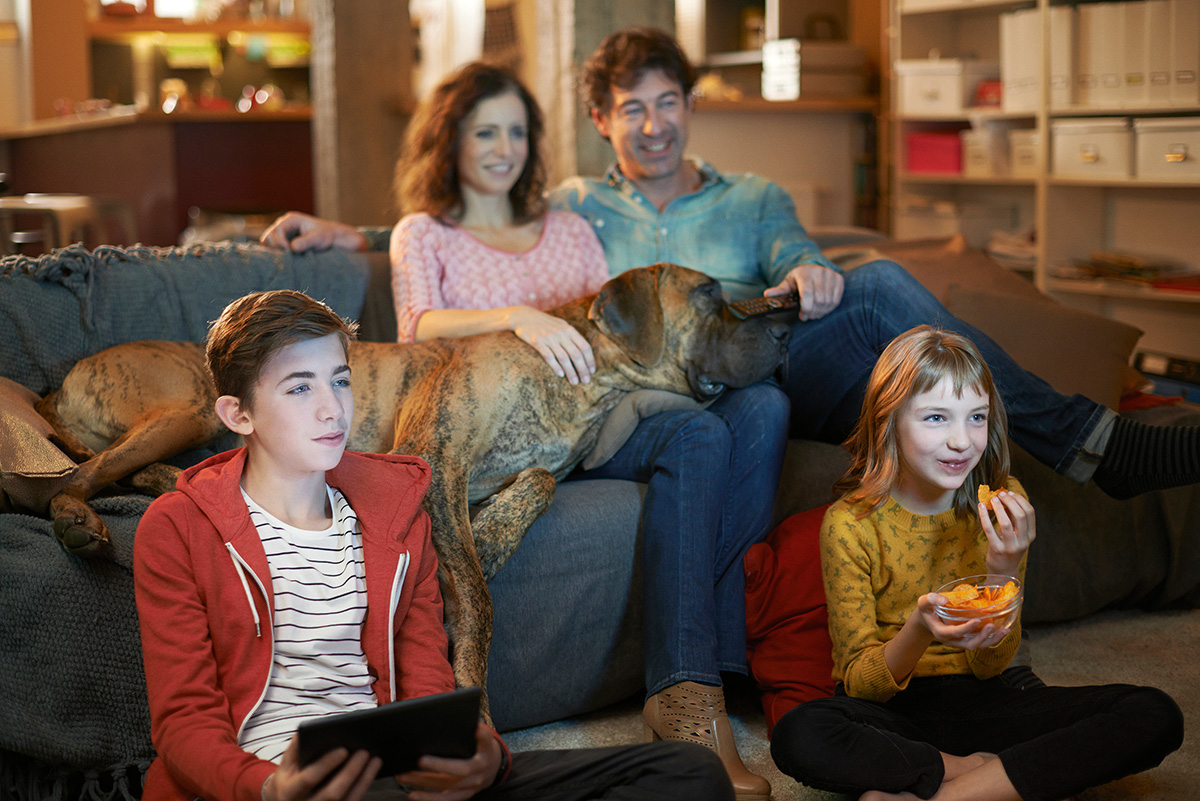 Areas that the company will focus on in the coming years are a project to increase its onegigabyte network to two-and-a-half gigabytes in the short-term, while achieving 10 gigabytes is the ultimate goal. Telenet will also push fibre deeper into its network and enhance its commitment to 5G mobile technology.

“We’ve always been a market leader in innovation and we will continue to be that,” John promises. The onus will also be on creating initiatives to retain the loyalty of its customers, such as the new linear sports channel it added to its basic offering earlier this year. 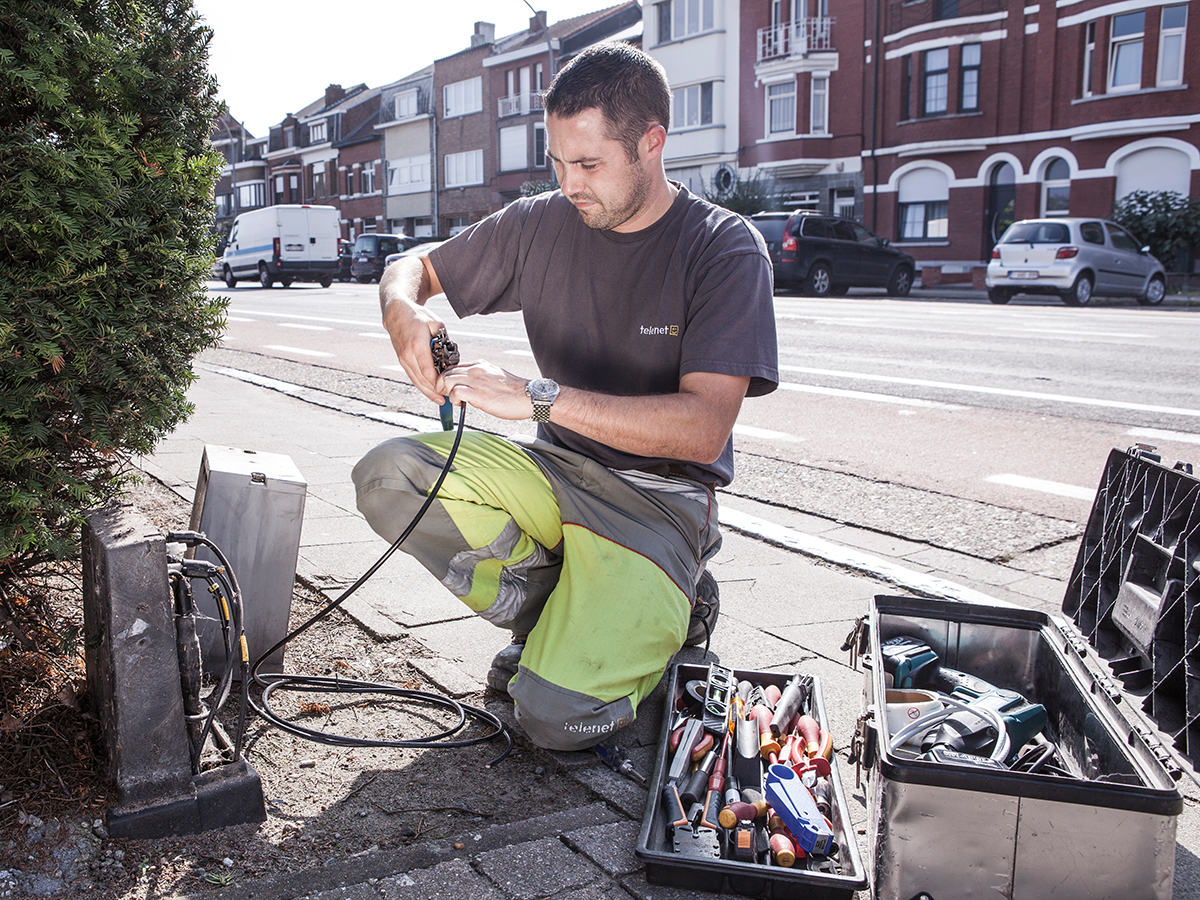 Meanwhile, John is confident that growth will continue as Telenet pursues an overarching strategy of “customer intimacy”, enabled by its investments in data, analytics and engineering, as well as its new agile workforce and operating model. The company’s strong sense of purpose also feeds into this strategy.

“We are in a period of dramatic disruption, so as an organisation, we have to meet that challenge by being extremely versatile, extremely innovative and I think extremely optimistic about our future and the role that we have to play in a world that’s becoming increasingly connected and digital,” John says. “I mean, is there any other service that people use 18 hours a day, seven days a week?” 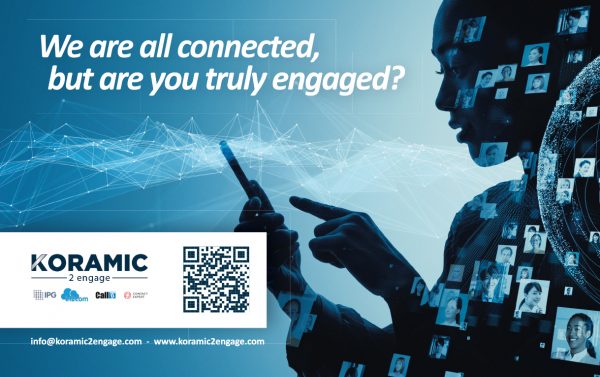 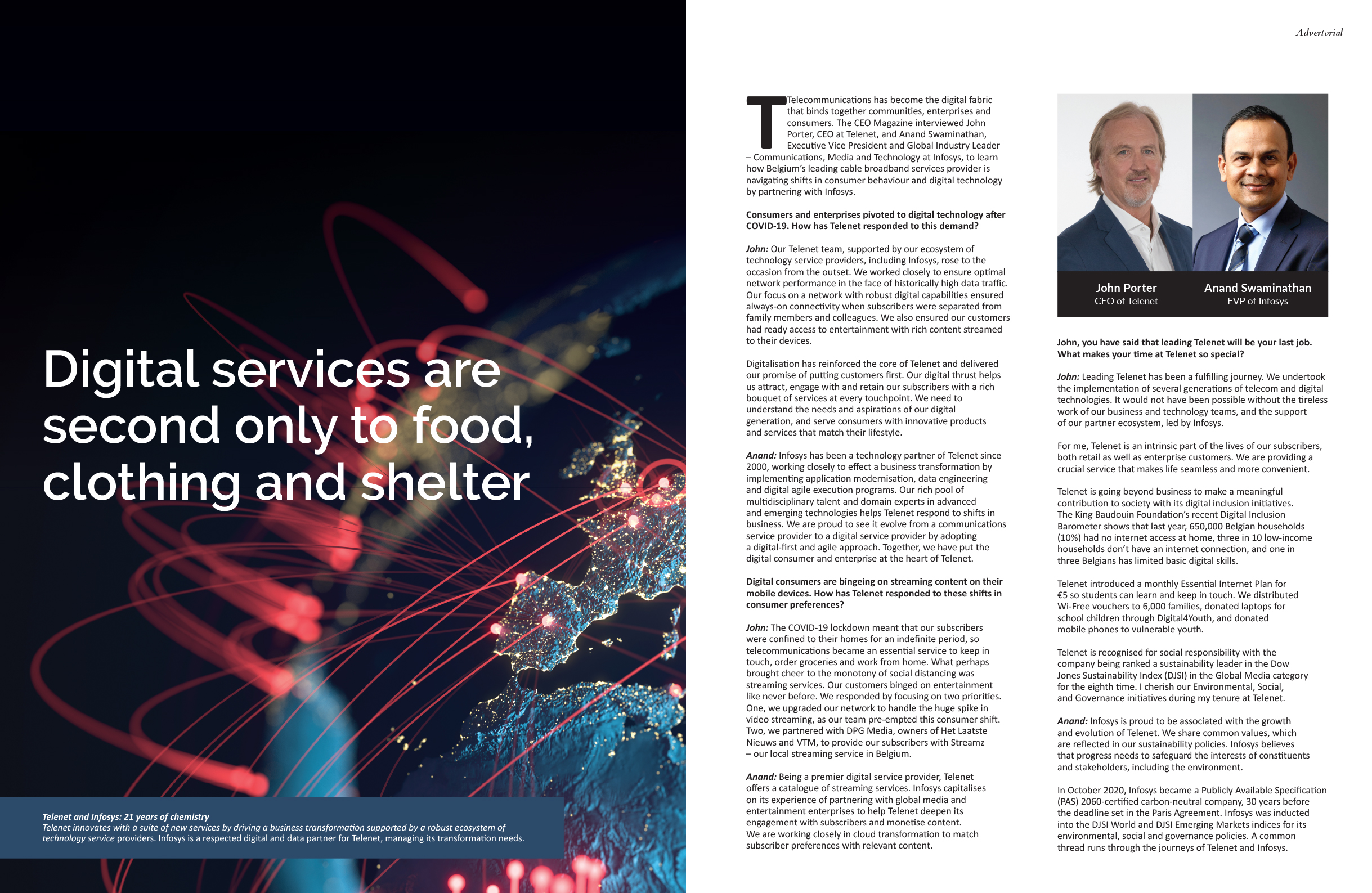