We do meaningful work: Stephen Rue Whilst NBN Co CEO Stephen Rue had always set out to put people and purpose at the core of the company’s journey, little did he know the fundamental role the network would go on to play in supporting the nation at its time of need.

Stephen first joined NBN Co in the CFO role in 2014 before becoming CEO in 2018. “From 2014 to June 2020, our primary focus was building out a network. So, when I started, NBN was really just an infrastructure construction organisation,” he shares. “Now we’ve moved beyond being an infrastructure builder to being a great service delivery organisation, my job today is to ensure that we keep meeting the needs of the community by investing in the network.”

Much has happened between where NBN started and where it is today, Stephen says, recalling his time spent developing the long-term plan for the company, its nationwide rollout and the many innovations that it has since introduced.

“There have been some huge changes,” he says. “In those days, we hadn’t launched many of the technologies we have today. In fact, our satellites hadn’t been launched into the sky either. We’ve done a lot of work to get to where we are today. We’ve built around 2,206 wireless towers, launched two satellites into space and completed the build to 12 million homes and businesses across Australia.”

Thanks largely to the sheer size of Australia, not to mention that it’s also an island, there were many challenges along the way. “Australia has very large territories, and even the urban cities are spread out,” Stephen says. “This created challenges in the infrastructure build.”

Regardless, NBN navigated those challenges with finesse, providing Australians with a strong connection at affordable prices while bridging the digital divide. “Now, we have 8.2 million homes and businesses that are connected to the NBN,” Stephen says. “When I started, it was just a couple hundred thousand.” 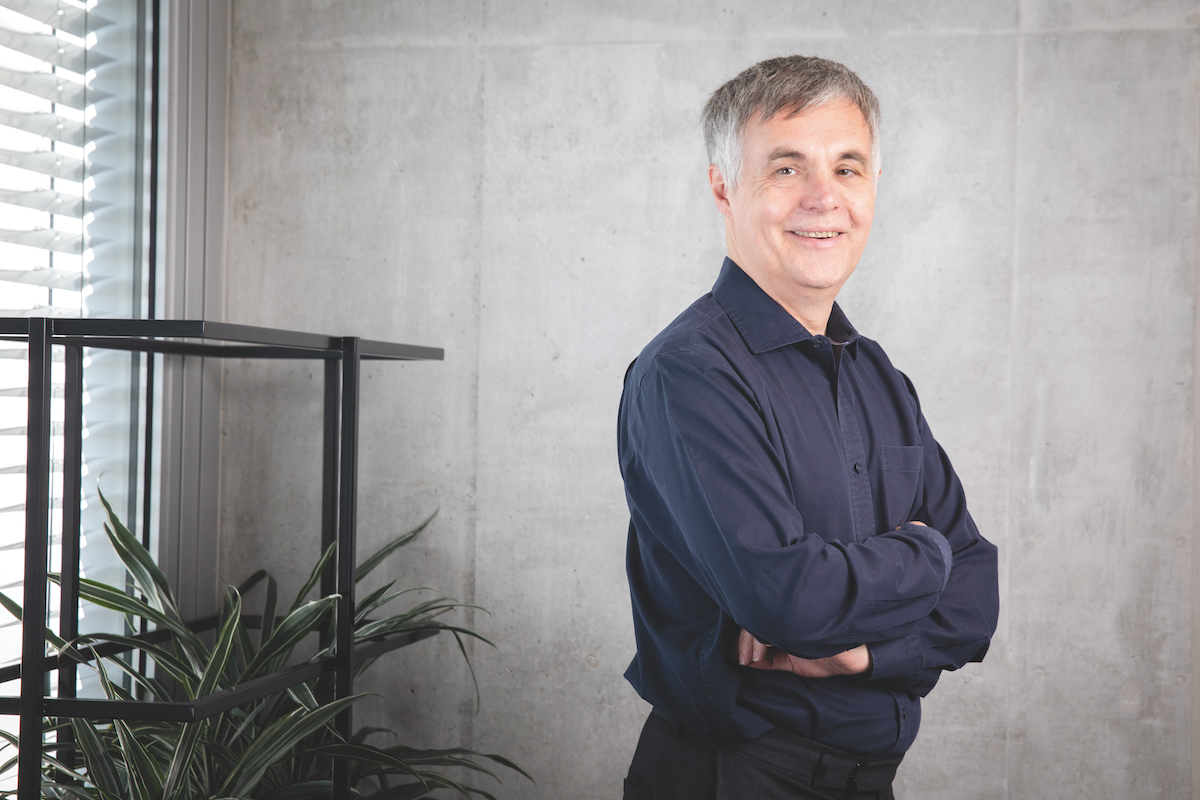 “It feels amazing to have been able to build a network across Australia, supporting people when they needed it the most.”

When Stephen and his team began planning the NBN rollout, they anticipated many challenges, but a global crisis of unprecedented scale wasn’t among them. “We built the network by June 2020. What we didn’t know at the time was that we were rolling out high-speed broadband across Australia just in time for the global pandemic,” he says.

The onset of COVID-19 in Australia saw the country close its borders to all non-residents on March 20. The following day, social distancing rules were enforced while non-essential services such as restaurants and shops were forced to adhere to new state government-mandated closures. Residents who were returning from overseas were now required to spend two weeks in quarantine in a hotel upon their arrival to limit the spread of the virus.

For a nation forced inside, the internet became a vital tool for carrying on life as normal as possible. “People were working from home, educating their children at home, running businesses from home, and connecting and entertaining from home as well. So the fact that we had built a network just in time for all of that was quite remarkable,” Stephen says.

NBN Co’s values: the ethos that underpins the way in which the organisation acts and behaves.

We care
– Uphold the safety and wellbeing of each other and ourselves.
– Lead with purpose, do the best for our communities.
– Be curious, there’s always something to learn so together we can grow.
We are fearless
– Listen, really listen, invite feedback and ask ‘why’ to genuinely understand.
– Speak up, knowing it’s safe and expected to call things out, share bold ideas.
– Trust and empower each other to make decisions and get things done.
We are one team
– Respect each other, we create an inclusive environment.
– Put team above yourself, recognise one another’s contribution to create an even greater outcome.
– Better together, share ideas and resources across NBN, partner effectively with industry.
We deliver
– Start by asking, ‘Would this make a positive difference for our customers?’
– Set high expectations, accept accountability and honour our commitments.
– Strive and adapt, being innovative and always finding solutions to achieve excellence.

The network also enabled the state governments to impose lockdown restrictions because NBN made it more feasible for people to continue many aspects of daily life safely from home, according to Stephen. “With our contribution, we helped the economy. And we also helped to keep people healthy.”

“I’m incredibly proud of everything that my team achieved during the pandemic and of all their actions during those first three to six months of lockdown that helped support the community through all of it. It feels amazing to have been able to build a network across Australia, supporting people when they needed it the most.” 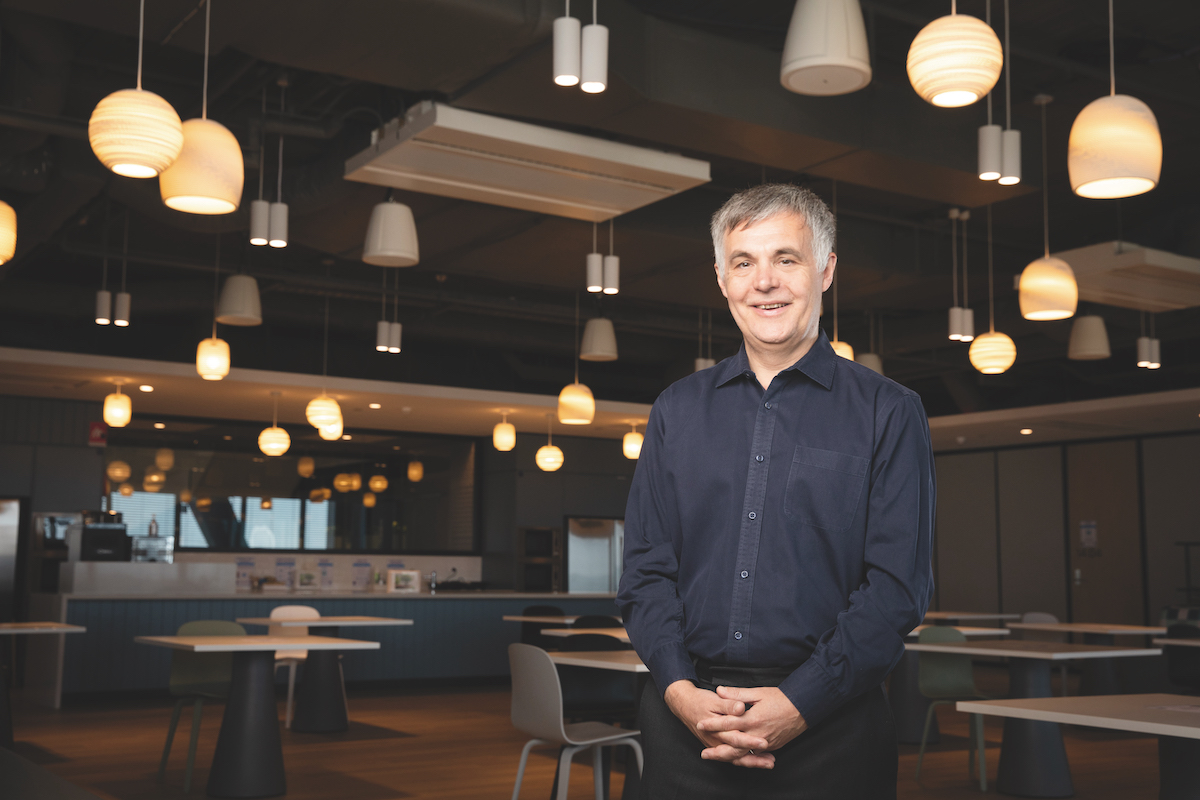 Internet through the ages

1990s
The early 1990s saw the first commercial dial-up services made available in capital cities. By the mid-90s, most people had access to dial-up internet. This was also an exciting time where a large segment of the population was getting their first home computer, using the internet mainly for email and instant messaging
2000
By the year 2000, the first consumer ADSL services started to become available in different areas. Internet speeds also started to get faster and faster as people enjoyed social networking, shopping online and using internet-driven gadgets like the iPod.
2005
ADSL2+ arrived with internet speeds that allowed for the streaming of video content on YouTube. People were also using the faster internet to connect socially via Skype and Facebook and partake in online gaming platforms.
2009
Cable was upgraded, providing yet another level of speed. However, this was only available to a small percentage of people.
2020
NBN Co’s new broadband access network became available at a time when Australia needed it the most – the onset of the COVID-19 pandemic. People in lockdown could work remotely, educate remotely, attend videoconferencing calls and run businesses from home thanks to the reliable and fast network.

Supporting people, both inside and outside of the organisation, underpins everything NBN does. As a purpose-led company, its values guide every step the team takes when interacting with each other, customers and the communities which it serves.

“Culture thrives when there’s a clear purpose in an organisation. And NBN has a real purpose. Our overarching objective is to lift the digital capability of Australia,” Stephen says.

As time pushes forward, he believes that purpose is only going to become stronger. “We’re going to see an explosion of need for digital services over the next decade to sustain economic growth and more equality across our nation and to ensure that Australia remains competitive internationally. That means that we need to provide an ubiquitous network that gives service to every Australian, no matter where they live in the country, for the purpose of making their lives better. That’s what drives me. That’s what drives the organisation. And that’s why many people came to work at NBN – and why they still work at NBN.” 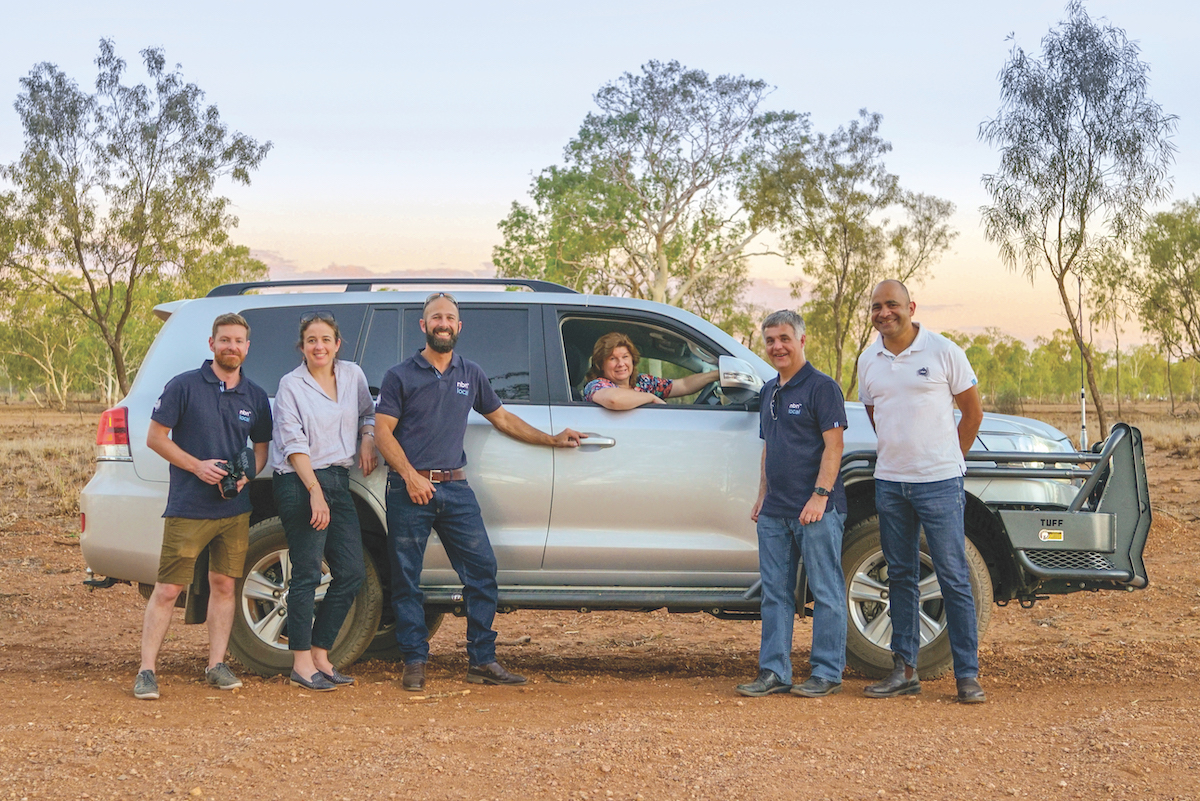 “The network is a living, breathing thing. You need to keep investing in it.”

With the idea of “one team” setting the standard so deeply ingrained in its values, the company has become the sum of its parts, according to Stephen. The people it interacts with help to drive its success. “We have an internal set of values that sustain us as employees. But there’s also an outward focus to it too that ensures our values resonate with the community as well,” he says. “It’s our one-team culture, and it’s what we strive for in the organisation and also how we seek to work with suppliers, retail partners and the community.”

Stephen has also worked hard to create a culture that cares. “This is a subject that is very dear to my heart,” he shares. “We are an organisation that cares about our employees. We embrace things like diversity and inclusion and health and safety. And externally, we care about the environment and the community.

“I’m really proud to have helped create this culture where individuals can come to work and be themselves,” he continues. “Where their lives are enriched by working here and they feel supported, do great work and, in turn, advance their careers. All of this adds up, allowing them to go home and feel satisfied with the work they do.”

Along with a fearless attitude that champions everyone’s responsibility to raise an issue if there is one and an unwavering commitment to delivering upon set targets, these values make NBN a stand-out compared to other companies. “We do meaningful work. We offer employees the perfect balance of work that is challenging but not overwhelming, and so our workforce engagement is high. Our workforce, itself, is probably what sets us apart from other companies,” Stephen says. “Overall, the fact we’re a government-owned, policy-driven organisation with a very strong purpose and a very strong focus on values is what makes us different from other organisations.”

That unique difference makes creating lasting and effective business partnerships that much easier. It’s a natural alignment of values and purpose that allows NBN’s strategic partnerships to thrive. “Some of our partnerships go back more than a decade,” Stephen shares. “Since the beginning, it’s been important for us to find partners in the industry that really buy into our reason for being. Of course, there will always be commercial discussions, but that shouldn’t get in the way of working together to deliver on behalf of the community. And that’s very much been our focus.”

Having moved from Dublin to Australia as a newlywed more than 30 years ago, community is everything to Stephen. “I actually came to Australia for an adventure,” he recalls. “But we very quickly settled in Sydney. It’s something I didn’t expect at all. I also never imagined I’d be involved in the various work activities I’ve done throughout my career either, particularly a nation-building activity. But one of the great privileges of doing this job is because Australia’s been so good to me. So to be involved in something that provides benefits to the Australian community is a real privilege.”

At its peak, NBN was connecting around 40,000 homes a week. To accomplish this took the support of many. “You have to remember that, during that time, all our retail partners were also adding those customers to their networks,” Stephen says. “So, for us, having those strong relationships has been crucial.

“Over the years, we have built some fabulous partners in the industry. And we couldn’t have built our network, nor could we continue to be of good service to the community if it wasn’t for our great suppliers and retail partners.”

“For me, the great thing about NBN is its purpose and its people, and the delivery of our strategy to build that digital backbone for the nation.”

“Ericsson is proud of our long-standing partnership with the NBN for over 10 years. Our successful relationship is underpinned by our joint ambition to connect remote Australians and continuing to leverage the platform that we’ve built together through technological innovations.”
Emilio Romeo, Managing Director of Ericsson Australia and New Zealand 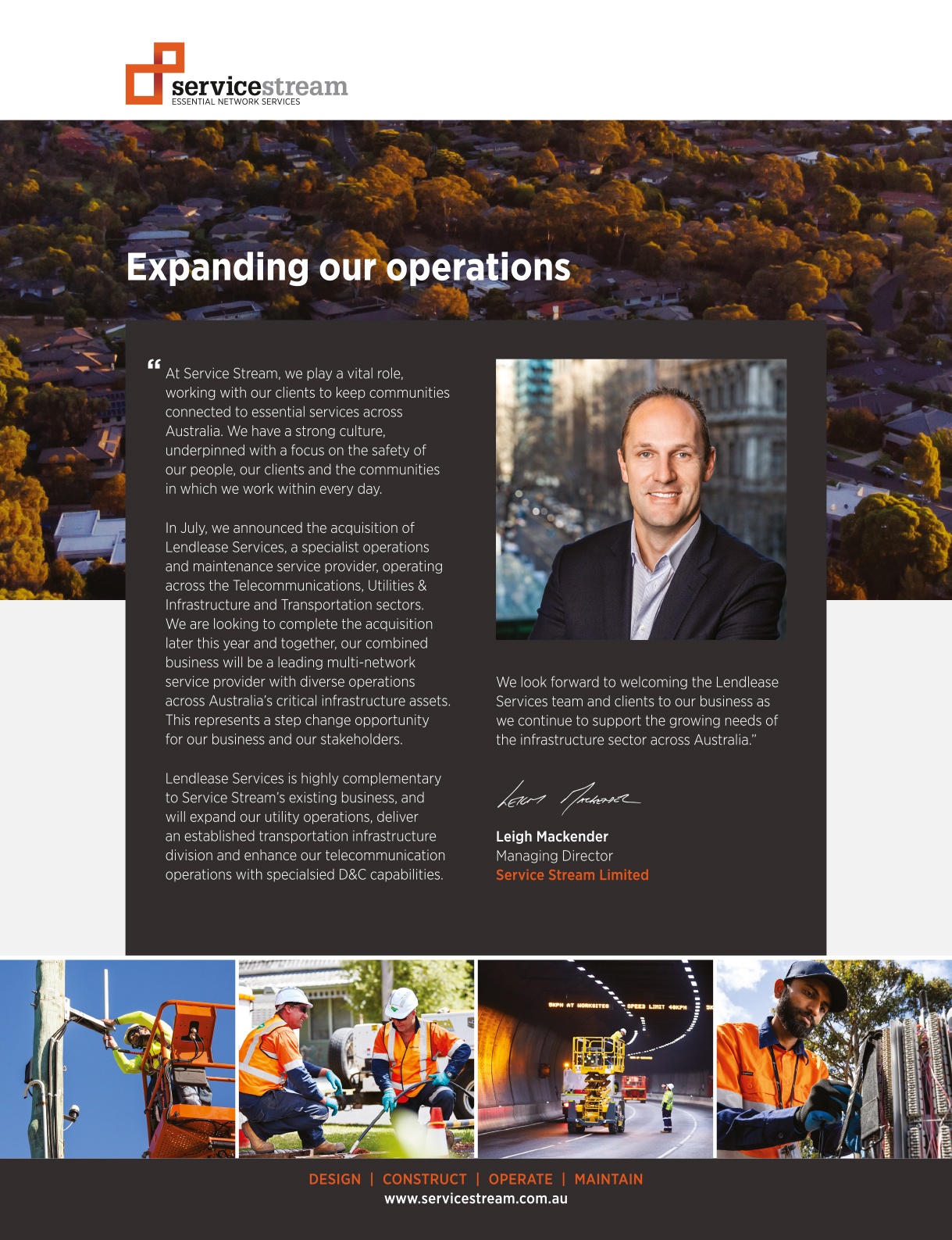 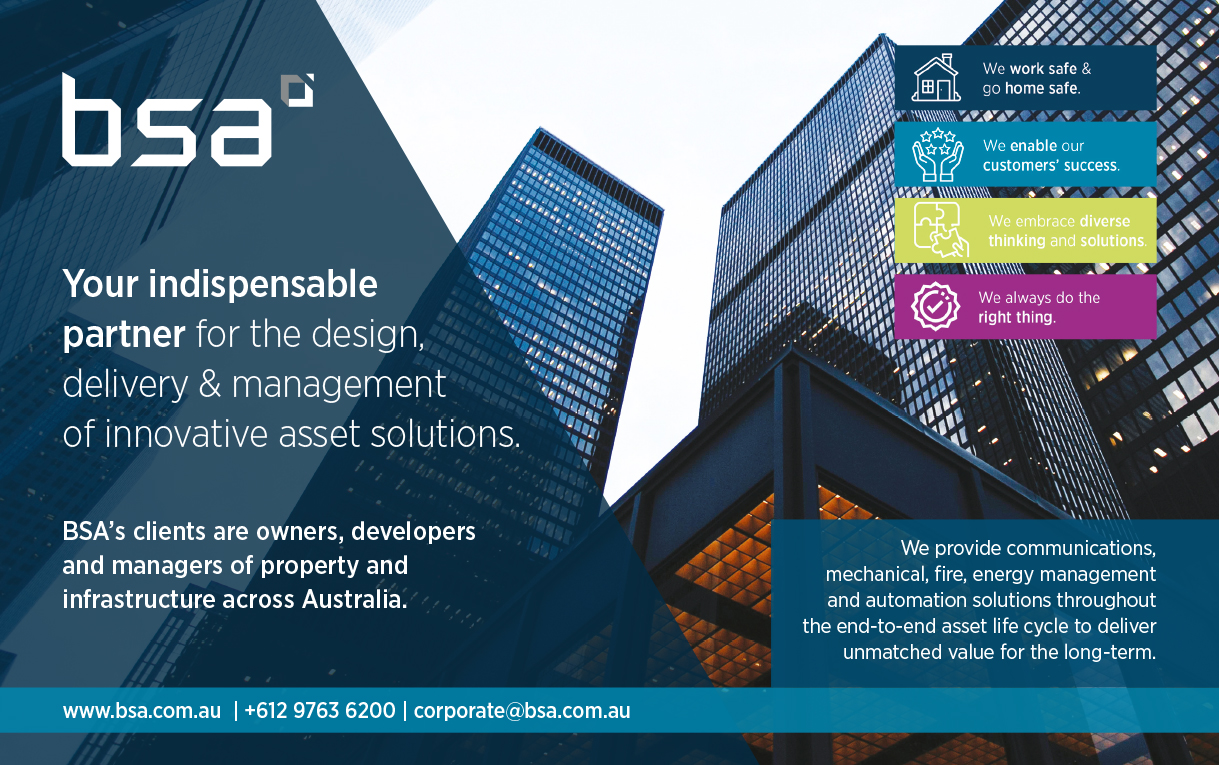