The Power of Connection: Charles Griplas 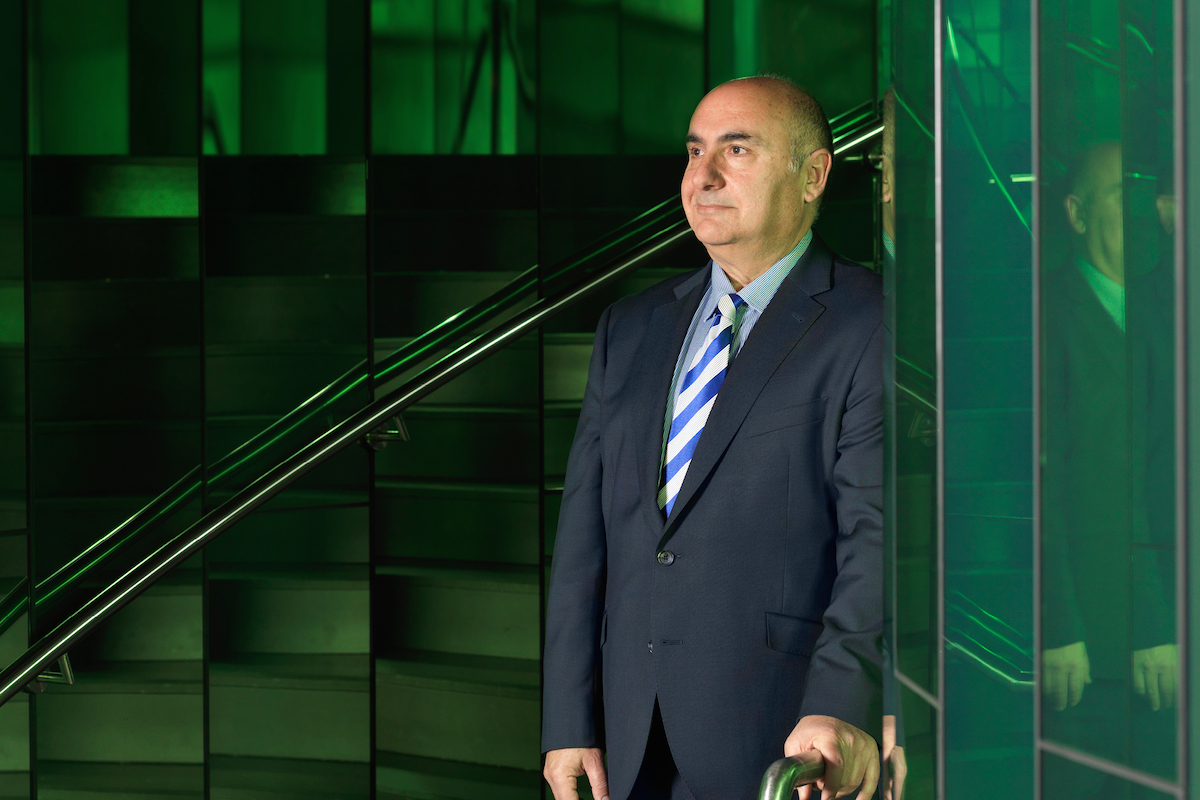 Driverless cars were once the stuff of science fiction, a futuristic vision of a shiny robotic society that seemed too distant to grasp. But that is no longer the case. Automated vehicles are coming, with many countries setting them loose on public roads within the next year.

Although Australia is not yet among them, ConnectEast is busy paving the way for this autonomous revolution. “There are five levels of automation and we’re currently at two-and-a-half,” ConnectEast CEO Charles Griplas tells The CEO Magazine. “There’s a fair way to go, but we can dream the dream and get the road ready for it, so to speak.”

Charles was appointed CEO of the company in 2014 after a six-year stint as CEO and Managing Director of the Melbourne-based ferry service Spirit of Tasmania. However, while making the move from managing a ferry service to a toll road may seem like a big jump, he insists the two areas have more in common than it might at first appear.

“They’re actually the same asset,” he says. “Whether you’re running ships or roads, all the same core principles apply.”

Essentially, it is about taking “dumb assets” and making them into “smart assets”, Charles explains. “Our thinking and the way we utilise technology has to change and evolve,” he asserts. “If you think of both assets, be it a road or a ship, as being dumb assets, it’s how you engage with them that makes them smart assets.” 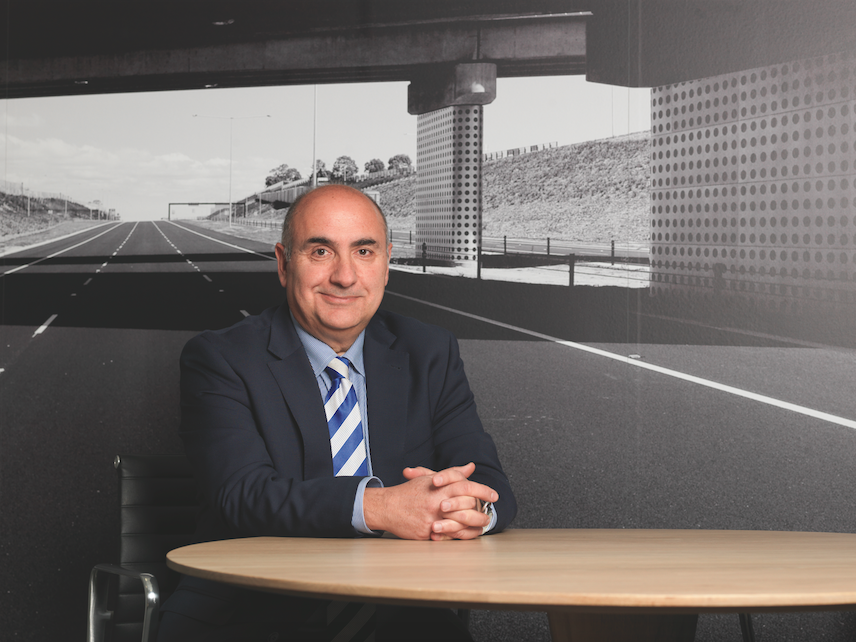 In the toll road space, that means integrating and communicating everything to ConnectEast customers using innovations ranging from toll tags to more futuristic autonomous vehicles.

“We’ve engaged in a whole series of trials there: how we use new technology around tunnel ventilation, vehicle to infrastructure communication and so on,” Charles confirms. It is also about how to engage with customers, whether through the Internet of Things or other technology.

“We turn dumb assets such as bridges, machinery and pavement into smart assets by layering them into our asset management plan where we look at asset life, degradation, life cycle and how we can better manage these assets,” he explains.

According to EastLink’s ‘2020 Victorian Self-Driving & Electric Car Survey’, motorists would prefer hybrid power for their next car over a traditional petrol combustion engine, with the preference for 100% fully electric vehicles not far behind and showing strong growth.

It also found that 71% of motorists think governments should provide incentives to encourage take-up of EVs. It is a trend that ConnectEast is well-placed to capitalise on. “We’re ready for electric vehicles, for autonomous vehicles,” Charles says.

“We’ve done a whole series of trials and received an industry award from Intelligent Transport Systems Australia for tunnel ventilation improvements and commendation from the Australian Road Research Board for autonomous vehicle trials. We do a lot of things because we want to be able to engage them with the road and that sets us up beautifully.”

A recent and successful example of turning a dumb asset into a smart asset is ConnectEast’s ventilation on demand project. Tunnels use massive ventilation systems, which involve a number of huge jet fans that are traditionally programmed by the time of day and week to turn themselves on and off.

Obviously, during peak periods, there are more fans operating. “We’ve turned the traditional tunnel into a smart tunnel by using the air sensors in the tunnel to decide automatically – through some smarts and some programmable logic – which fans should be running and at what speed. The fans are run by the air sensors in real time,” Charles explains.

“We worked hard on that, but look at the results. Our carbon footprint has reduced dramatically. The enormous amount of electricity saving as well, once you put all that power back into the grid – it’s just phenomenal.” The project has also delivered benefits for the company by extending the life of the fans as a result of using them less frequently, and also reducing maintenance requirements.

“The business wins, the environment wins and, for the local residents immediately near vent stations, the noise has halved and there’s no noise at night,” he states proudly.

The “next big leap” for ConnectEast will be how it engages in terms of infrastructure to vehicle communication. “We’re preparing ourselves for the next big thing here, which is SIM connectivity,” Charles predicts. New vehicles coming onto the market are fitted with a SIM card in the dashboard, which opens up a whole realm of opportunities.

“We want to do away with tags,” he reveals. “We want to be able to communicate to your vehicle’s dashboard SIM and talk to you more directly than any other method.”

Enhancing communication to this extent will enable ConnectEast to upgrade its payment gateways and better manage its network by reducing congestion, which is great news for commuters. However, at present, its capabilities in this area are limited because connection via SIM is currently constrained by cybersecurity and privacy issues. 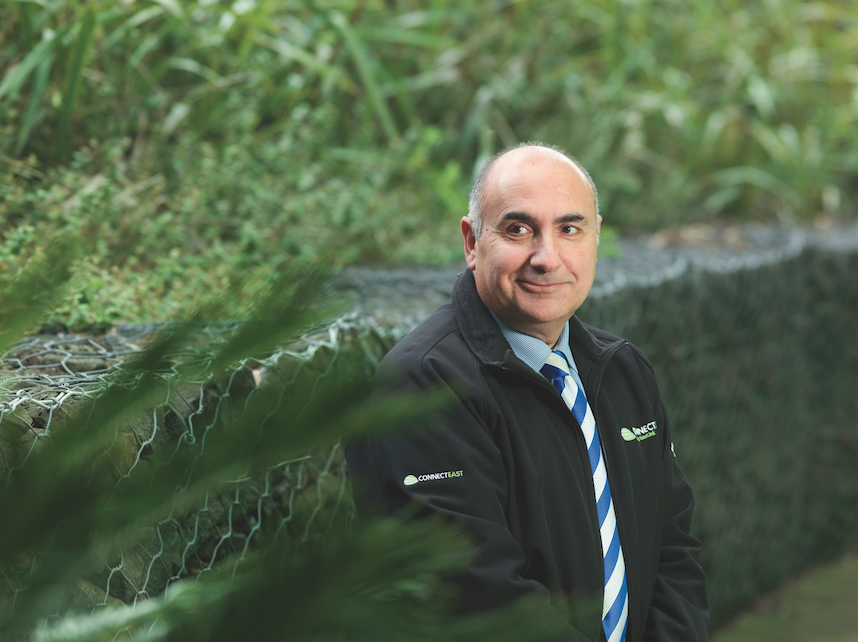 “The minute we can get over these issues and connect both ways, then we can actually engage in that,” Charles suggests. “The technology is there. It’s already built into new vehicles; it’s us switching it on and engaging it.” For example, Lexus recently started a trial in Victoria of infrastructure-to-vehicle communication.

“We conducted a trial a few years ago of the same thing, to ensure that the communication bandwidth that’s being used by vehicleto-infrastructure communications can coexist with our tolling system bandwidth because they’re very similar.”

The first self-drive function on a car is expected by the roads and motoring industries to be operated on freeways, which are the easiest places for self-driving to take place from a technology perspective. It has already been announced that fully self-driving vehicles will be allowed on British motorways within the next year.

“It’s standardised, it’s a good line of sight, there are no pedestrians or cyclists to worry about, everyone’s driving in the same direction and there are no traffic lights,” Charles says. “It’s a very easy environment.” However, there is still a great deal of work that goes into preparing freeways for this self-drive revolution.

“We’re talking some really basic things like line markings and signage all the way to vehicle to infrastructure communication,” he adds.

These bold innovations, while making sound business sense, also feed into the company’s ambitious sustainability goals. “We’ve already looked at our climate maps going 30 or 40 years ahead and we anticipate what that looks like in terms of our road and how people engage with our road,” Charles explains, adding that factors which have been taken into consideration include extreme weather events, higher temperatures and flooding events.

“We can then have more of a view of how to adjust our asset management strategies and what we need to do to futureproof for climate change.” Painting an accurate long-term picture is key, but so is the ability to respond swiftly as climate change-related challenges unfold in the here and now.

For ConnectEast, that includes the suitability of its current assets in an environment of higher temperature. “We’ve temperature-proofed many roadside equipment cabinets and we’re now looking at landscaping changes that might be needed, such as shrubs and plants that are more suited to higher temperatures and reduced rainfall,” Charles says.

In 2020, the GRESB Infrastructure Asset Assessment awarded EastLink the top 5 Star Rating for the fifth year in a row in recognition of its environmental, social and governance endeavours, ranking 27th globally out of the 406 infrastructure assets of all types that were assessed by organisation, putting it well within the top 10%.

In the motorways (maintenance and operations) category, EastLink was ranked second in the world.

With Victoria particularly affected by the COVID-19 pandemic’s lockdowns, ConnectEast has responded accordingly, creating a community investment program to help community service providers during these troubled times. “We’ve provided six separate service providers with A$100,000 in donations each,” Charles shares.

Beneficiaries include a community legal centre, a financial counselling service, mental health service Beyond Blue, a family violence response unit and a preschool literacy assistance provider. They have been carefully selected by ConnectEast as a way of meaningfully connecting with its customers, aimed particularly at those in need rather than simply as a “blanket” contribution.

We’ve provided six separate service providers with a $100,000 in donations each.

“We don’t just want to sit here and send our customers toll invoices when they’re not paying their toll,” he insists. “Let’s instead engage directly with the counselling and legal services who assist people experiencing financial hardship. It’s all about working together toward outcomes for all concerned.”

The partnerships also represent the start of an “alert system”, which will benefit EastLink users by keeping outstanding bills out of the court. “Those financial or legal services can come and engage with us when they have people walk into their office with outstanding bills. It’s how we engage with them and help fund these services because we see them as part of our ecosystem,” Charles explains.

“We don’t want motorists to end up in the court system – we want to solve problems before they get to that point.”

According to Charles, it is these kinds of touches that make ConnectEast such a great place to work, adding that the average tenure within the organisation is between 10 and 15 years. “When we run our employee net promoter scores as well, we’re ranked in the plus 50s, which is a very good sign in terms of the healthiness of the organisation,” he says.

Indeed, he is a true believer in the power of reflection and seeks to empower his team to be able to read signals and refer to past experiences. “The maturity of an organisation is where you have a group of individuals or a team that can read the tea leaves,” he expands.

“They’re able to forecast based on signs that they’ve seen in the past, then they are able to inject themselves and change the course of events moving forward.”

Charles believes that collaboration is also key, which is why he has made a concerted effort to bring staff together in one location, the EastLink operations centre. ConnectEast is the only toll road operator in Australia and New Zealand to have everything in one place.

“I think that’s been a driving factor in our success and that was intentional,” he says. “For example, our call centre isn’t outsourced overseas. It’s right here, just 10 seconds’ walk from the control room.”

In the end, it’s all about creating close connections with everyone involved – somewhat fitting, given the company name. However, as the world continues to change, maintaining these connections will become a constant evolution, which is something that Charles affirms ConnectEast is determined to spearhead.

“We focus very clearly on engaging with the customer and making sure we’re at the forefront of that new technological wave, and ensuring that our road is smarter and forward thinking. We pushed the technology envelope with tunnel ventilation and now with autonomous vehicles – we are always pushing the envelope,” he beams.

“With all our corporate partners and suppliers, we are getting engagement on the refresh of our assets, because they know that we will do what we say.” 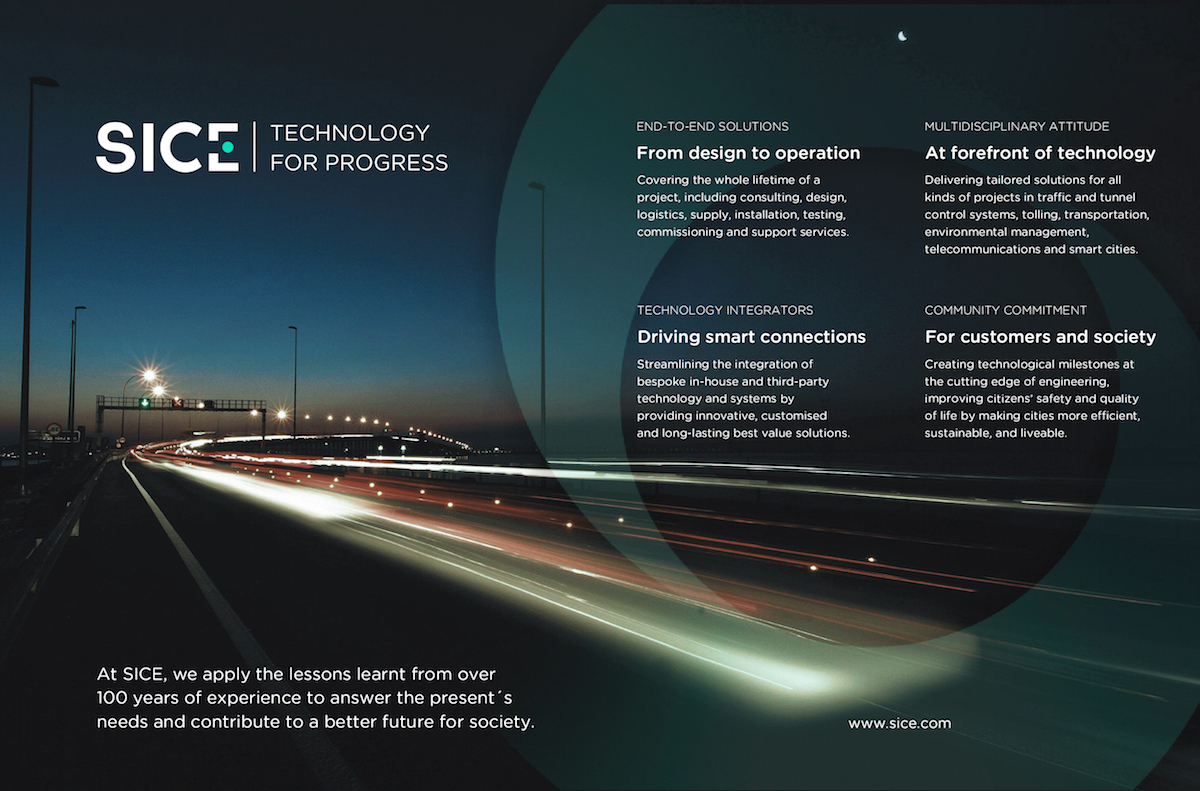