“We are always proud to be a pioneer.”: Hugo De Stoop 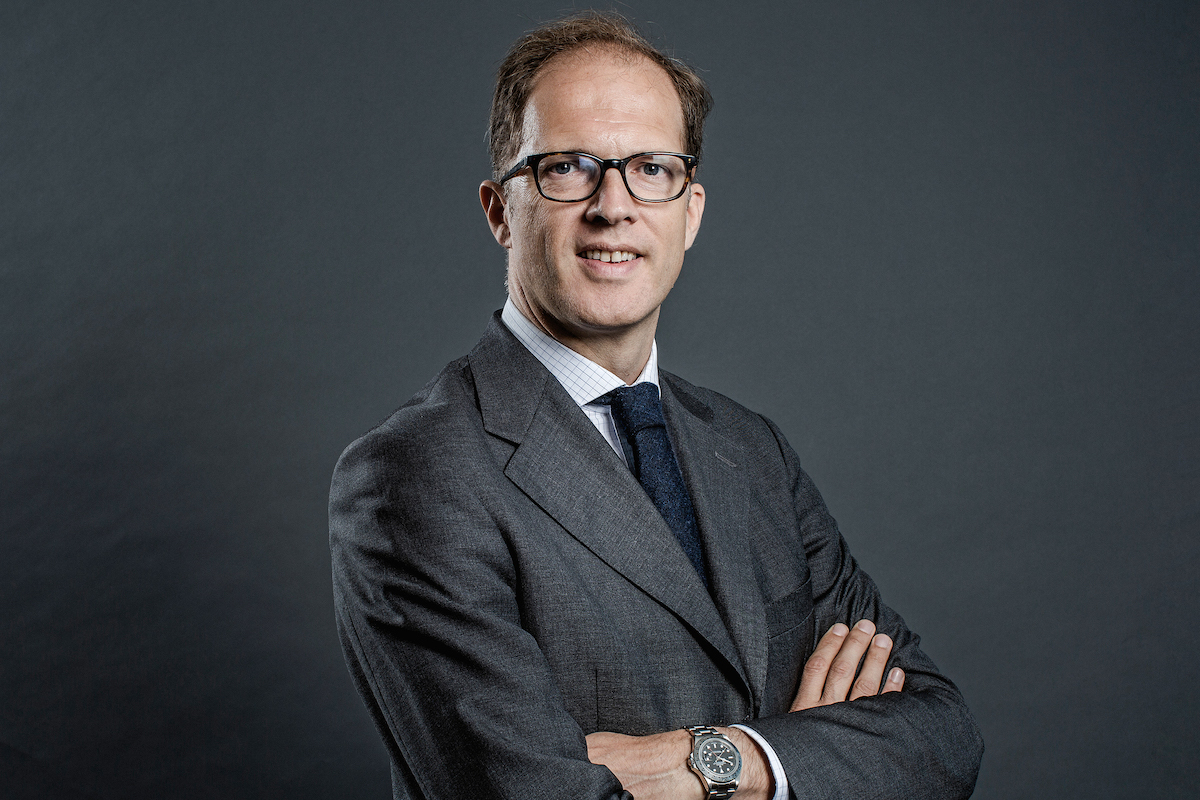 A veteran of the shipping industry, Hugo de Stoop has been a part of Euronav’s C-suite for 16 years. However, when he first made the decision to join the company in 2004, he surprised even himself.

“I’m very environmentally conscious, so I was never particularly attracted to the transport of crude oil by ships,” he admits. What convinced him was a chance meeting with Euronav’s owner.

“I was presented with a proposal that was focused on dealing with the industry’s bad reputation,” Hugo recalls.

“They said to me, ‘It’s all good and well to be a member of Greenpeace and the World Wide Fund for Nature (WWF), but that’s fighting from the outside. If you really want to change the world, you must join the industry and fight the problem from within it – and that’s what we intend to do with this company.’”

According to an analysis conducted by Euronav, the reasons for frequent oil spills are usually cost related. “Unfortunately, because revenue can be highly variable in this industry, the only thing companies can control is the cost,” Hugo explains.

“When you squeeze costs and take additional risks, those risks may lead to oil spills.” Instead of submitting itself to the price competition, Euronav has taken a completely different tack.

The company prides itself on providing modern ships and comfortable conditions for its crew, selling itself as a quality service provider that is less likely to lose the precious cargo it carries for its clients.

The world is still thirsty for, and dependent on, crude oil. It’s a commodity that is relatively easy to use and delivers about 40% of the total energy that the world requires.

“In 2007, Euronav became the first large tanker shipping firm to have its entire fleet made up of double-hull tankers, three years ahead of the regulation that all crude oil vessels had to be double-hulled,” Hugo reveals.

As its name indicates, a double-hull tanker has two hulls. Should the outer hull be damaged due to an accident, the inner hull remains intact, protecting its cargo and averting what could have been a disastrous oil spill.

“The cost of building two hulls was obviously higher than building one, but we believed that the industry was going to move in that direction, so it was important for us to be a first adopter,” Hugo says.

“Where others saw the opportunity to buy something cheap, we saw a risk – the risk of buying single-hull ships that would have to be traded in soon when they were phased out.”

This decision proved to be the right one when, just three months later, in November 2007, a single-hull ship spilled oil after a collision and made all single-hull ships commercially obsolete. Such foresight and openness to innovation is typical of Euronav.

“We are always proud to be pioneers,” Hugo says. But it’s not a position without setbacks. “We are always taking risks, because we can never be sure if a technology we’re adopting will become the new standard,” he explains.

“From time to time, we may invest in something that does not eventually become the standard, and then we are left with, for example, a ship that is less optimised for the market. 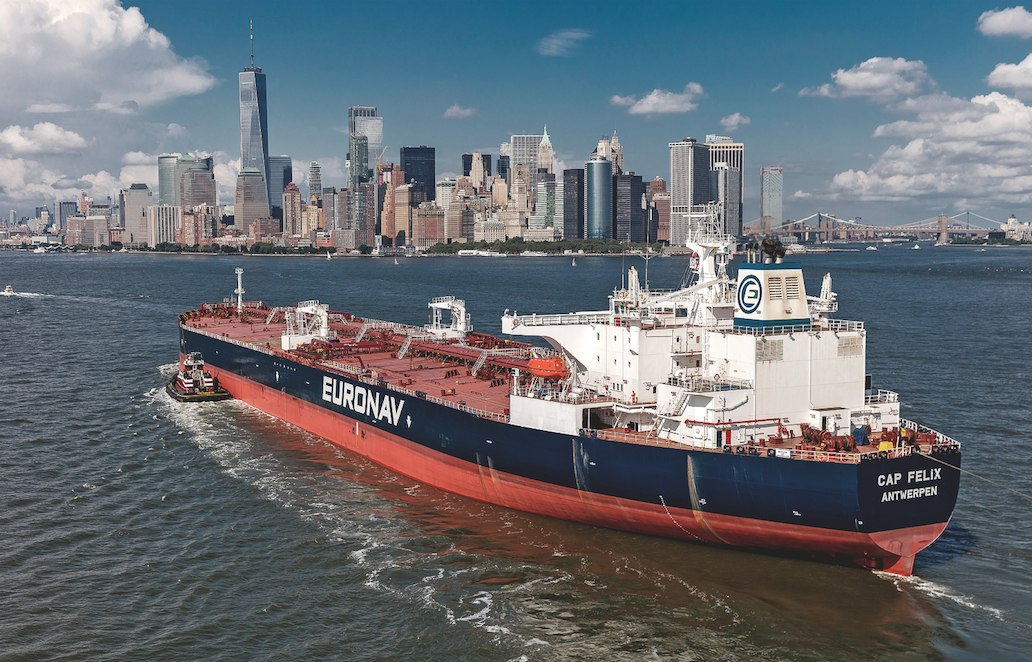 “Nevertheless, it is important for us to help the effort and support the shipyards and engine manufacturers who are coming up with these innovations, and assure them that they will always have a client in us, committed to being among the first customers interested as early adopters of the innovative product they are building.”

Despite public perceptions, Hugo insists that the shipping industry is actually an extremely environmentally conscious sector. “In fact, most of the regulations have been put in place by the industry itself,” he reveals.

“That’s because our ships spend most of their time in international waters, outside of the jurisdiction of any governments.” One of the industry’s most recently adopted regulations, implemented by the International Maritime Organisation (IMO), came in to effect in the very beginning of this year.

From 1 January, ships began using fuel with no more than 0.5% sulphur content – seven times lower than the previous limit of 3.5%. The move is expected to cut sulphur dioxide emissions from ships by 77%, or 8.5 million tonnes.

Traditionally, the fuel oil used in ships was the lowest grade fuel, usually considered unsuitable or too much of a hassle to refine, unlike the higher grade ones used in cars or planes.

“We were notified of this change four years ago and, in that time, we figured out two strategies we could choose between to meet the new requirements,” Hugo says.

The first was to buy a compliant fuel, usually at a higher cost, and the second was to install a scrubber system, which purifies the smoke that is emitted after the fuel has been burned to reduce the sulphur content but rejects the wash waters into the seas.

Needless to say, the firm went with the first option. That’s not all. According to Hugo, the industry has also committed to having ships reduce their carbon emissions by 40% from 2008’s levels, by 2030. By 2050, greenhouse gas emissions should be down by 50% for the industry.

He elaborates, “The 40% can be met working on the efficiency of individual ships, while the 50% applies to the industry as a whole. The latter is a challenge because between now and 2050, the industry is expected to grow, so the number of ships will increase. In order to achieve a 50% reduction, every ship may actually have to cut its emissions by 80% from 2008’s figures. The two numbers of 40 and 50% represent very different challenges, but both are ambitious.”

According to Hugo, when the Paris Agreement was signed in 2016, the aviation and shipping sectors were initially left out.

“It was for the same reason as the lack of regulation, which I mentioned earlier – we operate in international waters and airspace, so it’s hard to put us under any jurisdiction.”

But the shipping industry worked through the IMO and voluntarily committed to the agreement – this was how the aforementioned plans for reducing carbon emissions came into place. Hugo claims that the industry never deserved its bad name.

“Whether today or in 2008, when emissions were less regulated, shipping is the most efficient way of transporting one tonne of goods per kilometre. This is in comparison to trucks, trains or planes,” he reveals.

Euronav’s ships are, on average, 320 metres long with hulls 40 metres high. “Taking an example from container carriers, at full capacity a ship can carry 22,000 containers,” he continues.

“Now, think about the impact of 22,000 trucks on the road, travelling the same distance a ship would. The pollution rate would be 80 times higher with a truck, 40 times more with a train and 400 times worse with a plane.”

Despite these efforts, there remains a limit to what the industry can achieve. Hugo believes it’s due to a lack of consolidation, saying, “The industry is still extremely fragmented and, as a result, extremely inefficient and cyclical.”

In his opinion, there are too many players in the sector, none of whom are communicating or cooperating with one another. When the market is up, everyone invests and buys ships, resulting in an oversupply, usually followed by the market collapsing.

“This is perpetually happening,” he asserts. “We believe that consolidation will be very beneficial for everyone in the industry.” As the largest independent crude oil tanker company in the world listed on the New York Stock Exchange (NYSE), Euronav is doing its part.

“When I first started working for Euronav, the company had seven ships. Today, we have 75,” Hugo reveals. “We didn’t get here by buying or building new ships; we got here by acquiring ships that already exist in the market, mostly from businesses who share our values and who want to be a part of our platform.”

We are always taking risks, because we can never be sure if a technology we are adopting will become the new standard.

Convincing others to come on board is a challenge. “There are many traditions in this industry, and many old family-owned companies that have been in the sector for several generations who don’t always have a desire to be a part of a bigger platform.”

It is Hugo’s hope that, given the volatility in the world and the market, these outliers will eventually be convinced to come around.

It’s not just the environmental challenges keeping Hugo awake at night. “Let’s not ignore the obvious: we know that, one day, the world will become less dependent on fossil fuels and, in particular, oil,” he points out.

“Today, our market is growing by around one to ½% every year. A decline will probably happen in the next five or 15 years.” However, he has no plans to lead Euronav into taking action now. 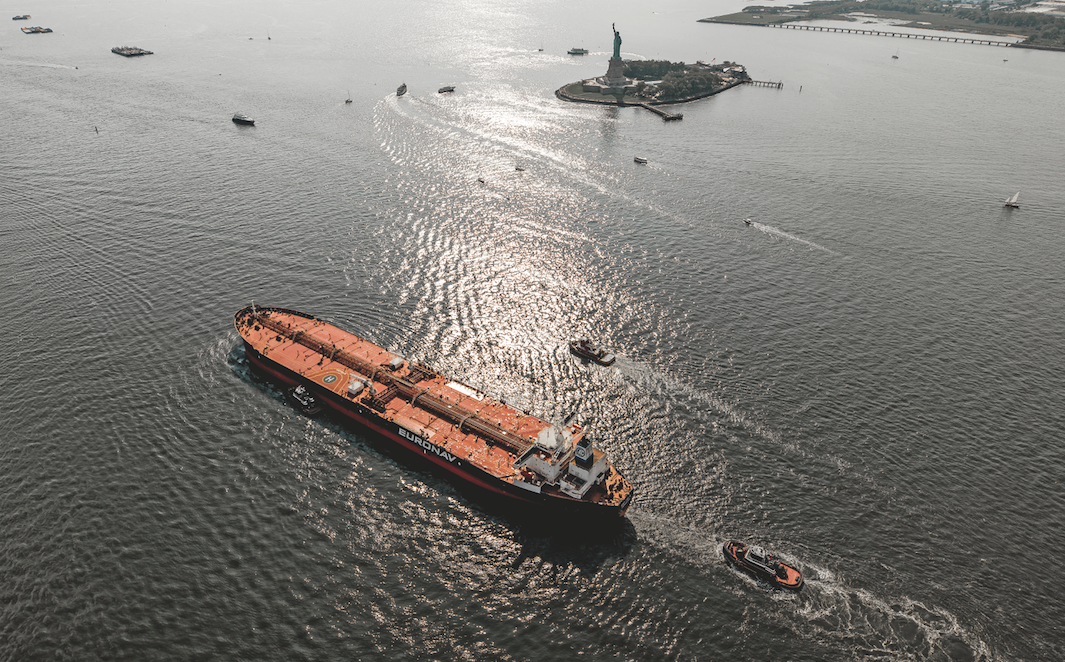 “That’s because we haven’t seen peak oil yet, and even when we do, it is unlikely to be a sharp decline. The world is still thirsty for, and dependent on, crude oil. It’s a commodity that is relatively easy to use and delivers about 40% of the total energy that the world requires.”

Even when the world eventually starts weaning itself off crude oil and transitions to renewable energy, it will not be able to do so without a helping hand from the former.

“The only way to transition to renewables is to use the energy sources we currently have. Solar panels, windmills and dams – energy is required to build all that, and it’s going to come from oil,” Hugo explains.

“I think Euronav will enjoy the industry for as long as it grows, and might even enjoy it more once it starts to decline. Looking at other sectors that have gone through a decline, such as the paper industry, for example, what usually happens is a round of consolidation so that only the big players remain.

This is exacerbated by the fact that there will be few new entrants to the market because a declining sector is usually unattractive. The companies that remain are then able to get bigger and more sustainable.

“Last but not least, ships are built to last 20 years, which means that in any one year, there will be a number of ships that are too old to continue sailing and will have to go to the recycling yard. As long as the number of ships being built is lower than those getting dismantled, we will be reducing the supply to match the shrinking industry and the drop in demand. It will not be a big disruption, but a manageable decline. At Euronav, we have the ambition to remain the dominant player until this decline happens. Following which, we will then think about our segue into other sectors.”

Although the moment to make concrete plans is years away, Hugo has already identified a potential opportunity. “We have tanks, and the world has a water problem. Who knows, in the near future, we may find Euronav transporting water instead of crude oil,” he says.

“There have been studies done to investigate the feasibility of shipping water from places with a great quality supply, such as Iceland, to places that are struggling with their water supply.

“There remain many opportunities to keep doing what we have been doing since the firm’s foundation. We will continue to change the industry, improve its reputation and grow. For us, the future is full of opportunities, and whether it’s in the short-term or long-term, the company is ready to explore them.” 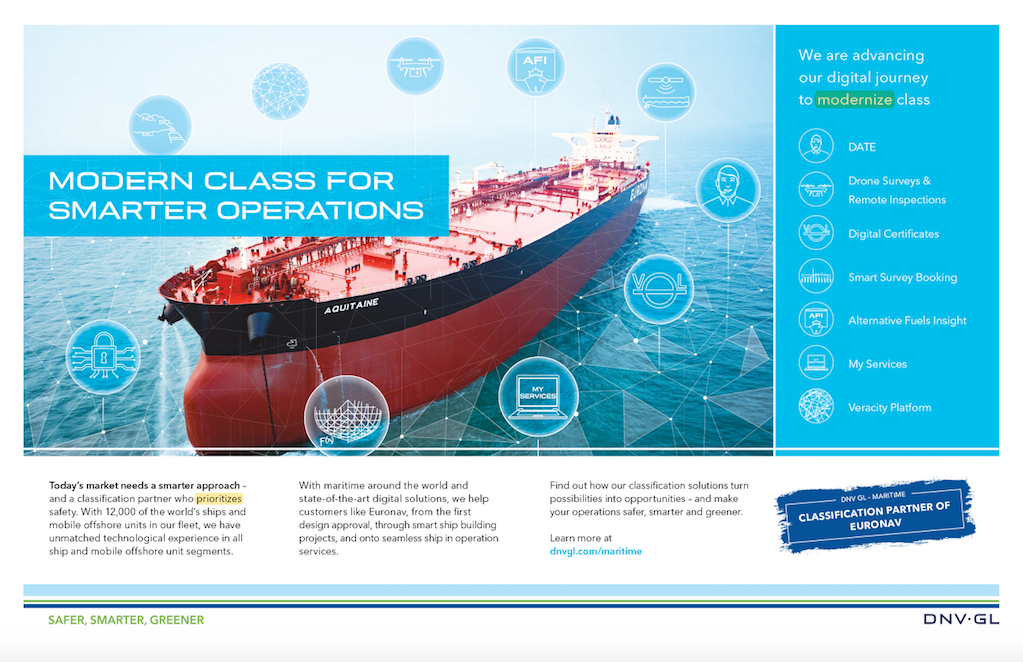