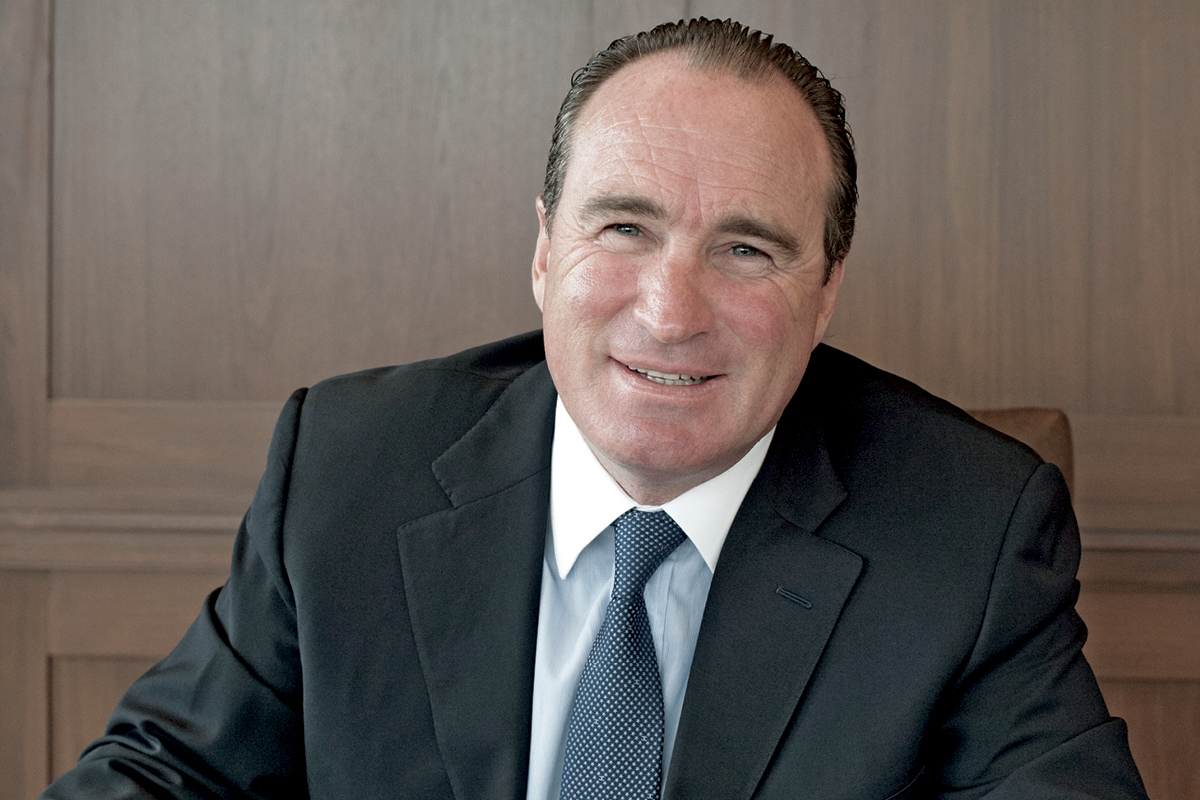 Five minutes into his interview with The CEO Magazine, Peter Fox, Executive Chairman of Linfox, pauses to take a call from his son. Before that, he was talking about his background and work history, giving short, direct but informative answers. You can hear that workmanlike facade slip just a little bit when he takes the call, though. It’s obvious he’s eager to talk to his son.

“Sorry. You there?” He says a little later. “My son’s overseas at the moment and he just wanted to have a quick word.” Family is important to Peter, and he tries to make time for his kids. Talking about his family, he becomes a bit more animated and audibly relaxed.

“I think it goes back to having such a loving and caring upbringing. Dad wasn’t around much because he had to work, and Mum was a seamstress when I was younger. So, when I wasn’t with them, I spent time with my grandma. Everyone pitched in and did what they could to look after me when I was a nipper, and I think that’s made an impression on who I am today.”

He’s nostalgic about his childhood, admiring what his parents did for him and his siblings. “Dad worked so hard when I was a kid. He was a truck driver, which meant he was doing long days, long nights and weekends. I always tell people I was born with diesel in my blood, and I really looked up to and respected the name he made in the industry, and the work he did for me and the rest of the family.”

“I always tell people I was born with diesel in my blood.”

Peter singles out his dad as his greatest influence and inspiration when it comes to business. “I couldn’t wait to finish school as a kid. I didn’t have any desire to go anywhere else. I just wanted to work in the family business.”

You are passing another Fox

Peter says his father’s rags-to-riches story is “often described as a fairytale” and it’s easy to see why. A high school dropout, Lindsay Fox started driving trucks for his own father at the age of 16. In 1956, when he was 19, he purchased his first truck for £400 and began delivering coal, briquettes and soft drinks around the state of Victoria.

His “excellent service and proactive approach” gave him a reputation in the logistics industry and, by the end of the decade, he had expanded his fleet to 10 trucks.

In the space of more than 60 years, Lindsay’s business has grown from those humble beginnings in suburban Melbourne to become the largest privately owned supply chain solutions company in Asia–Pacific. In that time, Lindsay developed close and long-lasting partnerships with the likes of Schweppes, Dunlop, Coles, Woolworths and BP, closely aligning with them to help meet individual needs and demands.

Peter chalks up the strength of these partnerships to Linfox’s values, saying the company’s integrity is a direct result of his father’s work. “I carry his values with me, and they have influenced the type of leader I have become.”

Peter got his first shot in the family business while he was still in high school, “driving forklifts in warehouses and jockeying soft drink deliveries”. When he left school, he briefly worked as a trainee cadet at Mayne Nickless before joining Linfox as a trainee supervisor. 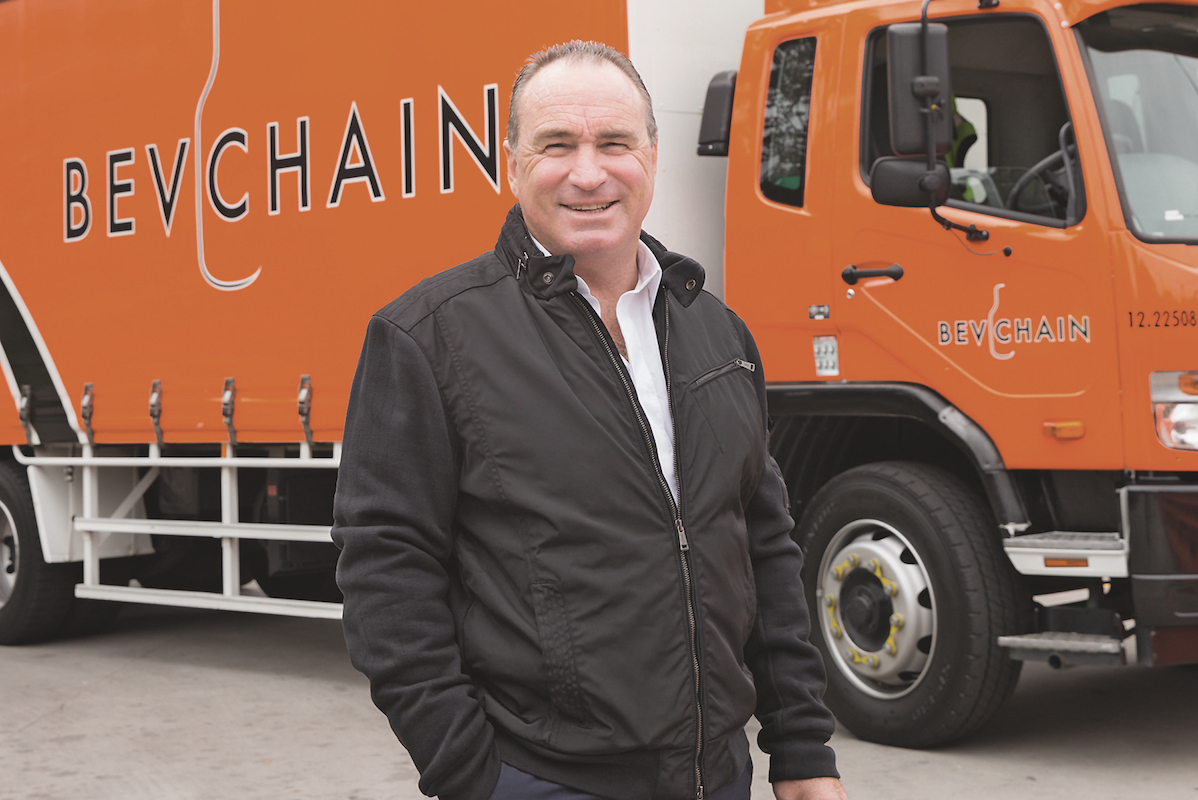 Working under Sandy Murdoch, an accountant who was instrumental in helping the company develop structured processes and financial discipline, Peter gained experience working as a leading hand, a site manager and then a contract manager. “Sandy was a mentor who really helped guide my career,” he says.

“I remember him giving me significant advice one day. He sat me down and bluntly told me, ‘I’ve promoted you five times in the space of three years. I know what you want to do and where you want to go, but you need to go and get a degree and earn the official certification.’

I took his advice and pursued part-time study at the University of New South Wales in physical distribution management, then went to Monash University before coming back to the business at age 26. I was promoted four more times after that and by the time I was 30, I was fortunate enough to be promoted to the role of Executive Chairman.”

Serving in that position since 1993, Peter has spent more than 25 years bringing his “innate business acumen” to Linfox’s operations. During his chairmanship, the company undertook “the largest logistics operation in peacetime Australia” for the Sydney Olympic Games in 2000, while expanding the business into India, Indonesia and Vietnam.

With more than 24,000 employees and 5,000 trucks on the road throughout 12 countries in Asia–Pacific, Peter says Linfox’s business ethos is the reason the company has been successful for more than 60 years.

“I think it goes back to the example my dad set in the firm’s formative years, and our credibility is directly because of his work. He taught me invaluable lessons in life, such as knowing that the harder you work the luckier you become, that your character counts and that the way you conduct yourself is everything.

The Fox family has a reputation for working hard and that’s been instilled in me. Those principles have made a difference regarding the organisation that we are today.”

Peter might owe a lot to Lindsay but when it comes to his vision of the logistics industry, he’s firmly behind the wheel. Since 1993, Peter’s undertaken new partnerships, acquisitions and joint ventures, with the company now embarking on “more than 100 transformational initiatives each year”, exploring ways to innovate and remain at the fore of the industry.

That’s typified by its ‘Outfox 2020’ business strategy, which focuses on “innovation, sustainable growth and a more cross-functional approach to enable Linfox to share expertise, resources and infrastructure”. The goal is be a more “intelligent and agile” business that positions itself at the forefront of the logistics industry.

As part of the company’s vision, Peter says the number one priority is to maintain a high standard of safety. To illustrate that point, he says that in 2006, the company had a Lost Time Injury Frequency Rate (LTIFR) of 38. Now, through the development of vital oversight procedures, the rate is 1.5, about a 90% reduction in workplace injuries.

“We’ve made the push to ensure that anyone who comes to work goes home in the same condition they arrived in. Everyone’s in safety boots and everyone’s wearing high-visibility vests. We’re doing what we can to ensure that there are zero injuries, fatalities and accidents in the workplace. As far as I’m concerned, even an LTIFR of 1.5 is far too high. We can’t rest until that rate is zero.” 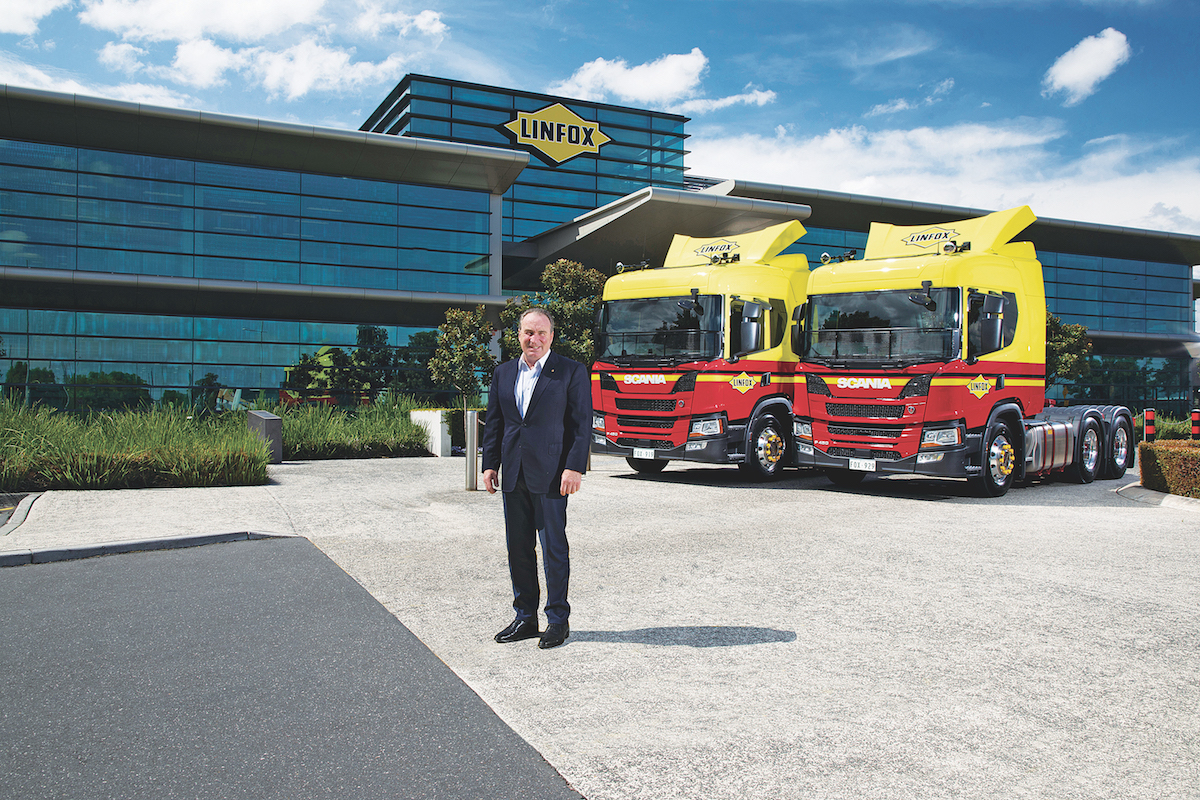 As an extension of maintaining the wellbeing of Linfox’s workers, Peter has focused his attention towards promoting the company’s ‘Healthy Fox’ program. “Let’s face it,” he says. “Truck driving is a fairly sedentary job and the food choices at truck stops are often limited to soft drinks, burgers, meat pies and sausage rolls.

As a business that prides itself on its work environment, I want to create a place that minimises the risk of serious health conditions such as heart disease and diabetes.”

“If we can make a difference to someone’s wellbeing, there’s no reason we can’t check in and make sure they look after themselves. If our drivers are healthy, they’re going to be happier and more productive.” On a larger scale, Peter has prioritised reducing Linfox’s carbon footprint, a subject he developed great interest in after attending the Copenhagen Summit in 2009.

“If our drivers are healthy, they’re going to be more productive.”

Unimpressed with the passive approach of people in attendance, Peter resolved to be proactive in addressing the looming crisis of climate change. “As far as I was concerned, people weren’t taking sustainability seriously, and I think it should worry everyone. We should be serious about confronting these problems.”

The impact of Peter’s approach has been measurable. Just a decade ago, Linfox’s emissions totalled more than 500,000 tonnes. Since then, the company has more than halved emissions through simple actions including installing solar panels on warehouses to recharge material handling equipment, fitting warehouses with smart lighting solutions, using intermodal transport where suitable and looking into electric truck technology.

“In practice, sustainability is really just a bit of common sense. It doesn’t take too much effort for us to catch water from our roofs and use it as toilet water or gardening water. Even something as simple as ensuring that our warehouse workers are turning off lights when they leave a room. We want to leave the environment in at least as good a state as we found it.” 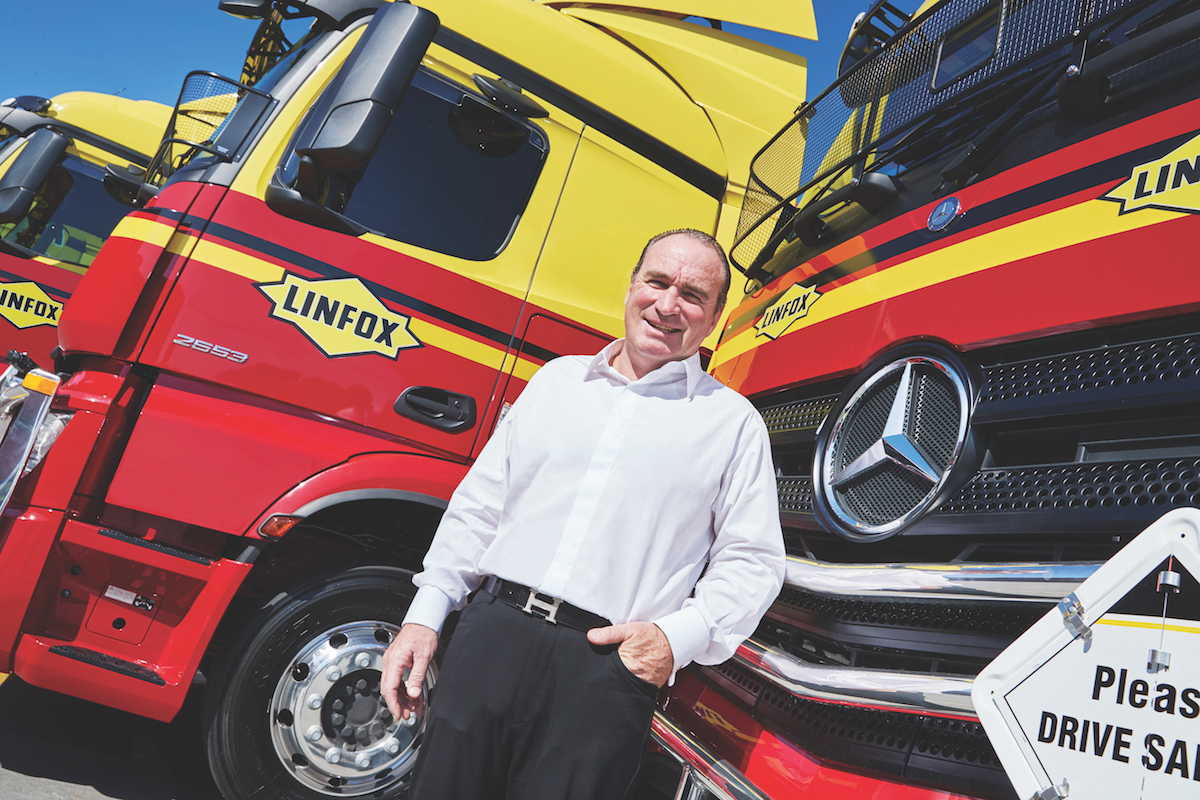 In the coming years, Linfox will begin researching and developing automated warehousing technology, which will help revolutionise the logistics business by “installing automation where it meets our customers’ requirements and focusing our biggest asset, our people, on high-value tasks”.

In addition, Peter says there is a huge opportunity when it comes to diversifying Linfox’s workforce and encouraging young people and women to enter the industry. “We’re looking to remove roadblocks and encourage a diverse group of people to come and work with us.”

“We’re looking to remove roadblocks and encourage a diverse group of people to come and work with us.”

Nevertheless, he is insistent the values his father instilled in Linfox will continue to inform the business as well as his own priorities as Executive Chairman. “I think it’s important that people know we are a family business. It’s what sets us apart.

Everyone knows who owns this business, and that’s a source of pride for us. That we can say we have people who have worked here for 10, 15, 20 or even 25 years – something that’s been lost in a lot of big companies – is part of what has ensured that Linfox has been successful for more than 60 years.” 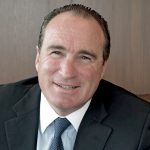