“We are not only Indian leaders; we are global leaders.”:Prabhat Singh Prabhat Singh believes the golden era for gas has arrived. As the CEO and Managing Director of Petronet LNG, India’s largest liquefied natural gas importer, he has been instrumental in driving the country to the forefront of the industry, and he’s not slowing down anytime soon.

“LNG is going to be around for the next three to four decades,” Prabhat says, “so we’re certainly working with the right product. Petronet has a niche capability of dealing solely with LNG and we’re seeing domestic and international pricing converge. This means that there is huge opportunity for this industry to proliferate.

“Around 50 years ago, LNG was primarily used by two or three countries, and less than one million tonnes were being transacted. Therefore, you felt safe for only the next 20 or so years,” he continues.

“Now, as we are moving into commoditisation, and the market continues to mature, I am starting to think that there are going to be more suppliers than buyers. There are nearly 70 import and export countries participating in the natural gas sector already, and this figure looks set to grow. It is by and large a buyer’s market now.”

Prabhat strongly believes that for India to convert this opportunity into its true value, national infrastructure is key. He notes that there is currently a deep emphasis from the government to increase the share of gas within the fuel mix.

In 2019, the country’s Oil Minister, Dharmendra Pradhan, announced a rollout of the city gas network in almost 300 districts by 2030, committing a large sum of money to connect citizens with LNG.

The City Gas Distribution licenses, combined with an expansion of the National Gas Grid, have put liquified natural gas at the top of the agenda and Petronet is aligning with these government policies.

We are trying to show that the face of India in the international LNG market is Petronet LNG.

Prabhat has identified two core areas of focus to capitalise on it: the re-gas business and small-scale LNG which he describes as a “big-ticket item” that is “price-insensitive”.

“We were ahead of the game [with small-scale LNG] and now others are following suit because they’re realising it’s a big business opportunity,” he says.

“It’s a segment that hasn’t really been tested out thoroughly in India, which means we’re not stepping on somebody else’s toes; the business is there for the taking. So, we have moved into a blue ocean segment where nobody is there to compete. But people are quickly realising that, and they’re coming into the segment. Nevertheless, we still have a clean slate to really showcase what we are doing.” 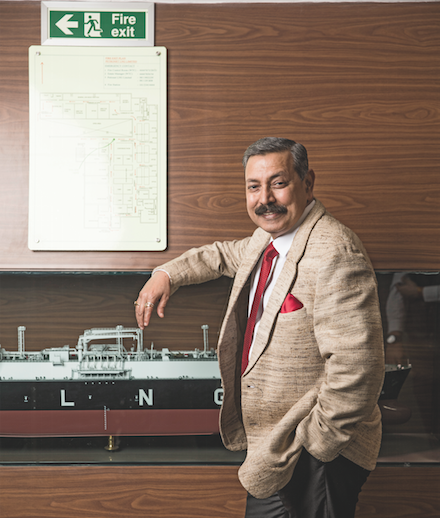 “When I started with the company, the market capitalisation was around INR18,000 crore,” Prabhat says.

Prabhat’s main aim is to have more LNG imported into India, and he wants Petronet to be the face of liquified natural gas in the international market.

The company is already setting a strong example for neighbouring countries such as Bangladesh and Sri Lanka, and its influence looks set to expand even further afield. It is already one of the largest buyers of LNG in India and has a global reputation.

“In fact, today in the global market, we are the single largest buyer from a single source – Qatar Gas,” he comments. “We have nearly 10 million tonnes of LNG contracted for 25 years. Up until now, from when we started with Qatar Gas in April 2004, we have not defaulted on a single cargo.”

Prabhat adds that Petronet has secured all contracts for the future, giving it a solid positioning in the market. “We are not only Indian leaders; we are global leaders,” Prabhat says proudly.

“We are cash-rich and have high liquidity. At this opportune time, when there is a transition going on, Petronet has the ability to play wherever we want. The future plans for Petronet are huge.”