Built into the side of an abandoned quarry that reaches 88 metres below sea level, InterContinental Shanghai Wonderland is a remarkable example of architecture born out of nature. 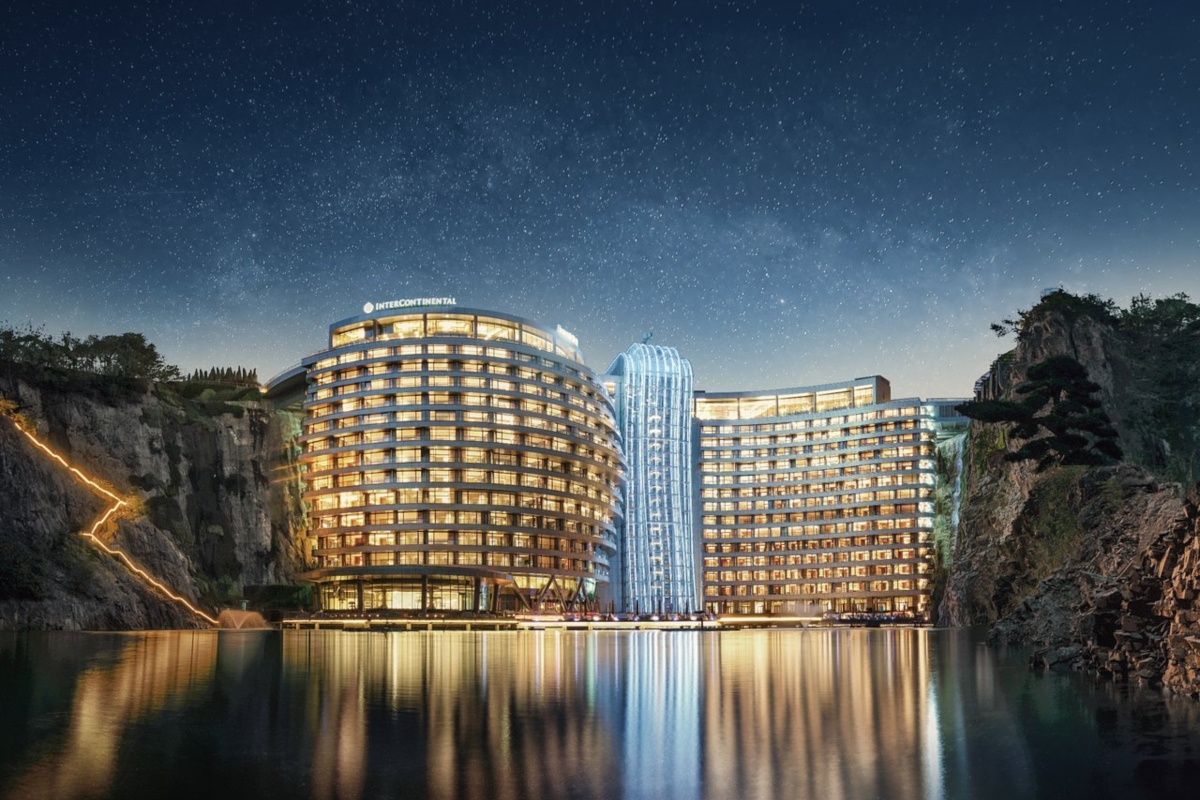 There aren’t many hotel architects that would choose an abandoned stone quarry on the outskirts of Shanghai as the site for their new hotel but that’s exactly what JADE+QA Architects did.

After more than a decade of innovative construction by some 5,000 workers, the InterContinental Shanghai Wonderland is an architectural wonder that has to be seen to be believed.

The incredible ‘earthscraper’ (the opposite of a skyscraper) is InterContinental Hotels Group’s 200th hotel.

Built into the side of an 88-metre-deep quarry in Songjiang, the subterranean hotel features 336 decadent rooms over 18 floors.

The bottom two floors are submerged inside a 10-metre-deep saltwater aquarium, allowing the guests in these six underwater suites to literally sleep with the fishes. 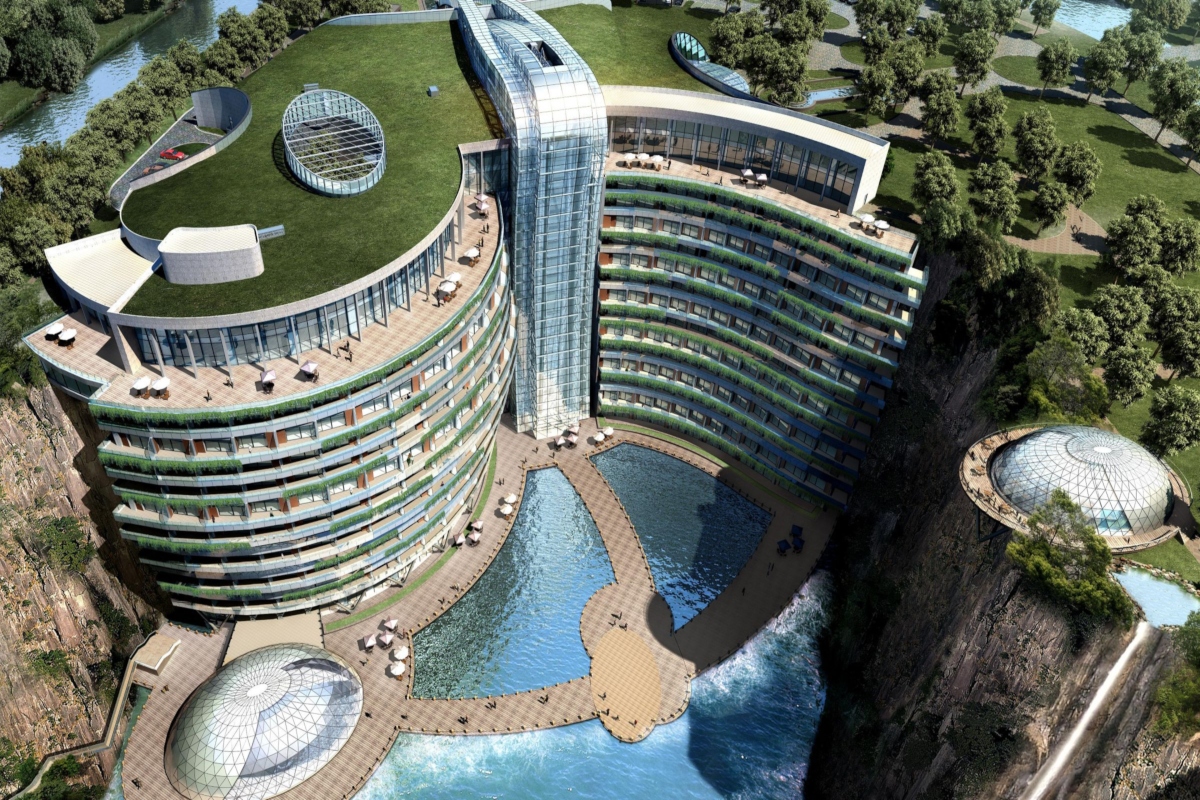 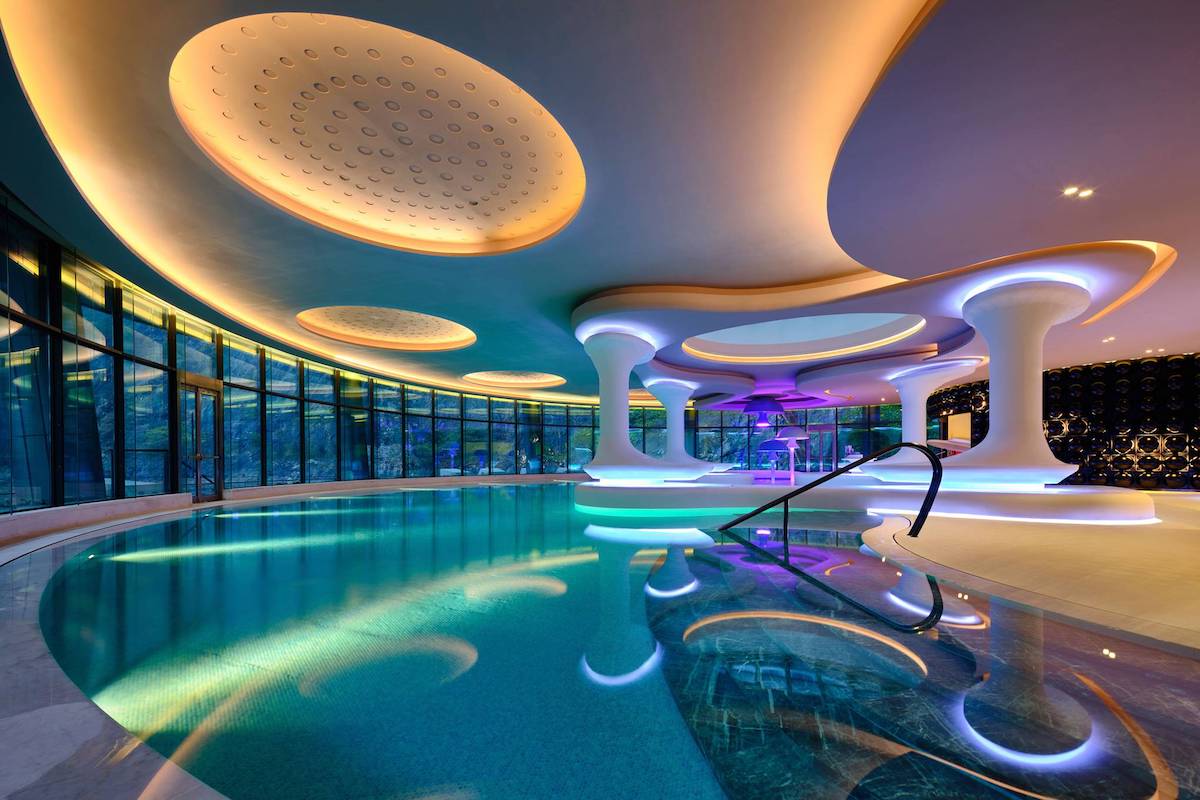 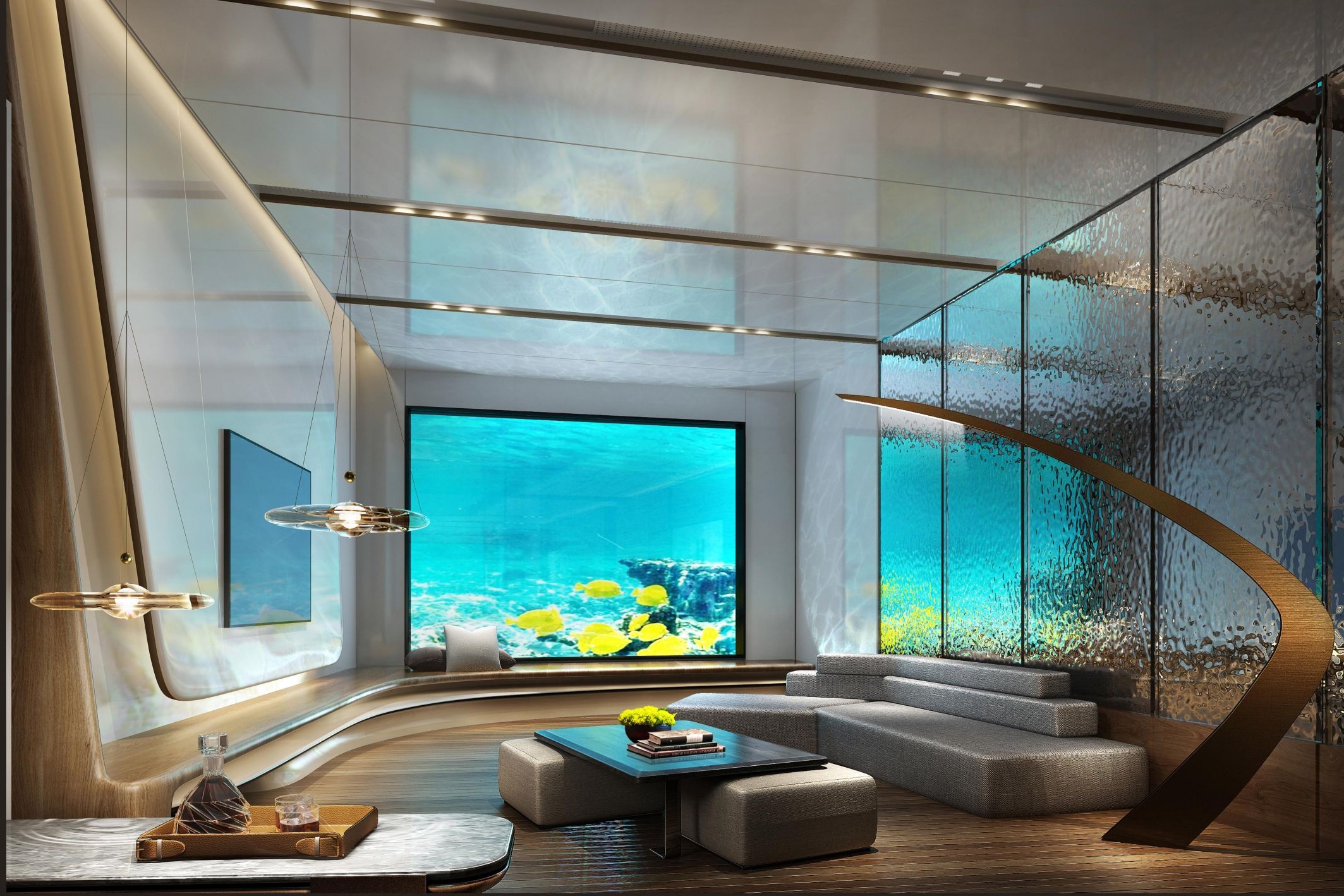 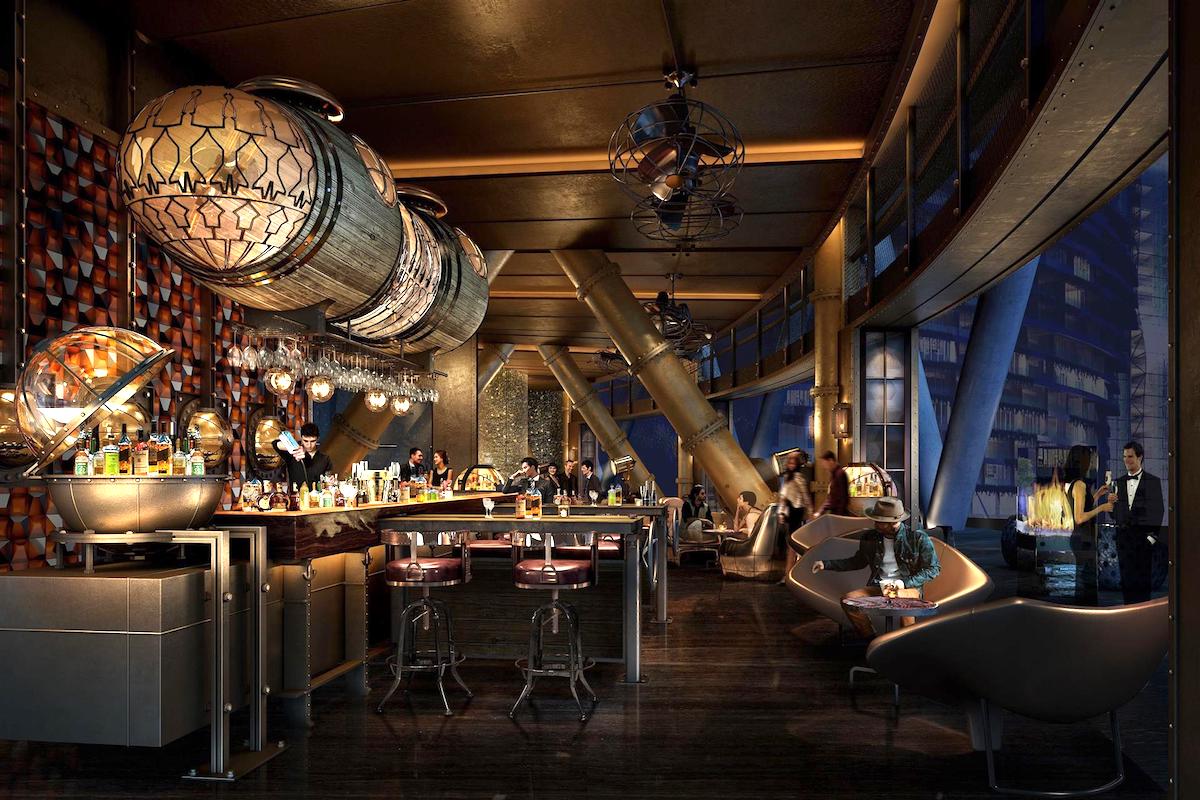 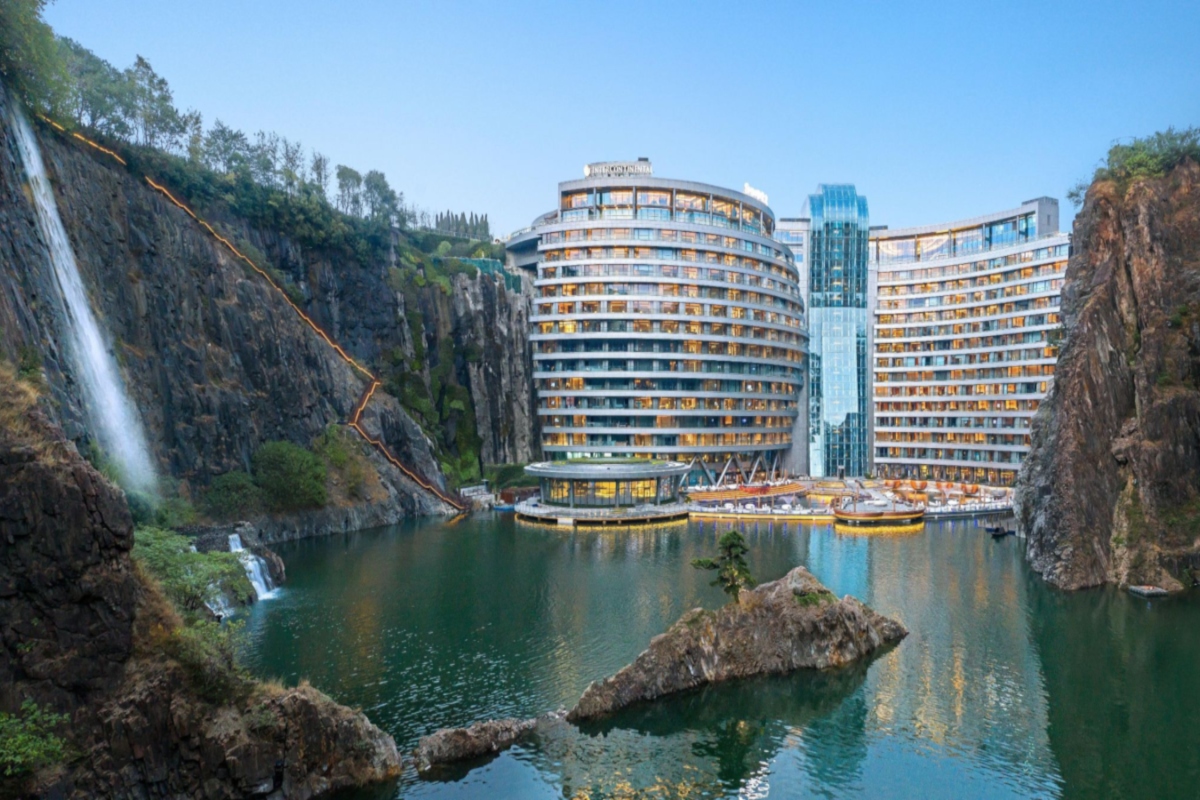 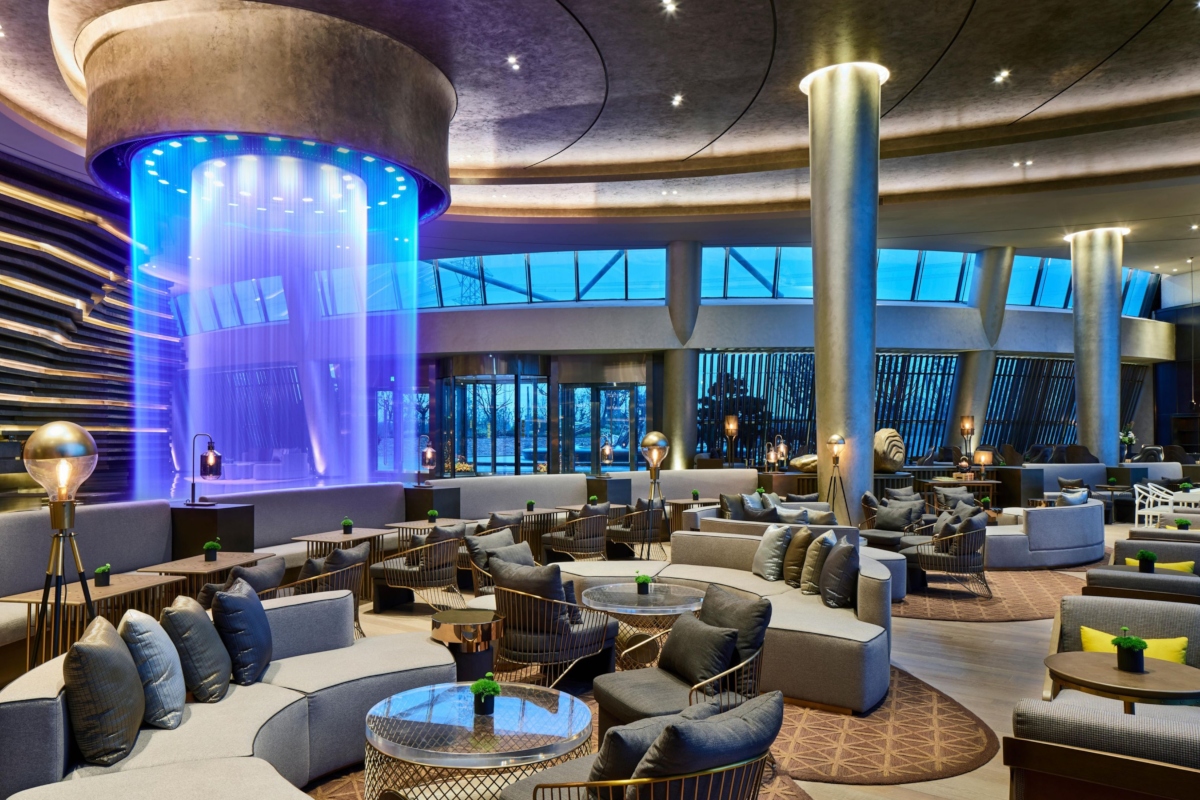 For those staying above water, all rooms feature a balcony with views of the stunning purpose-built waterfall spilling down the quarry walls. These cosy balconies are the perfect place to watch the nightly light and water theatrics – which are rumoured to rival that of the Bellagio in Las Vegas.

Thrillseekers can explore the quarry via a glass-bottomed walkway, kayaking around the quarry, ziplining across the pit at the neighbouring theme park and bungee jumping or rock climbing down the cliff face.

Designed with Chinese feng shui principles in mind, the shape of InterContinental Shanghai Wonderland replicates the ying and yang symbol when seen from above.

With three restaurants (including the underwater Mr.Fisher), a waterside bar appropriately called The Quarry, conference rooms, Grand Ballroom, swimming pool, spa and gym, this remarkable hotel meets the needs of guests travelling for business or pleasure. 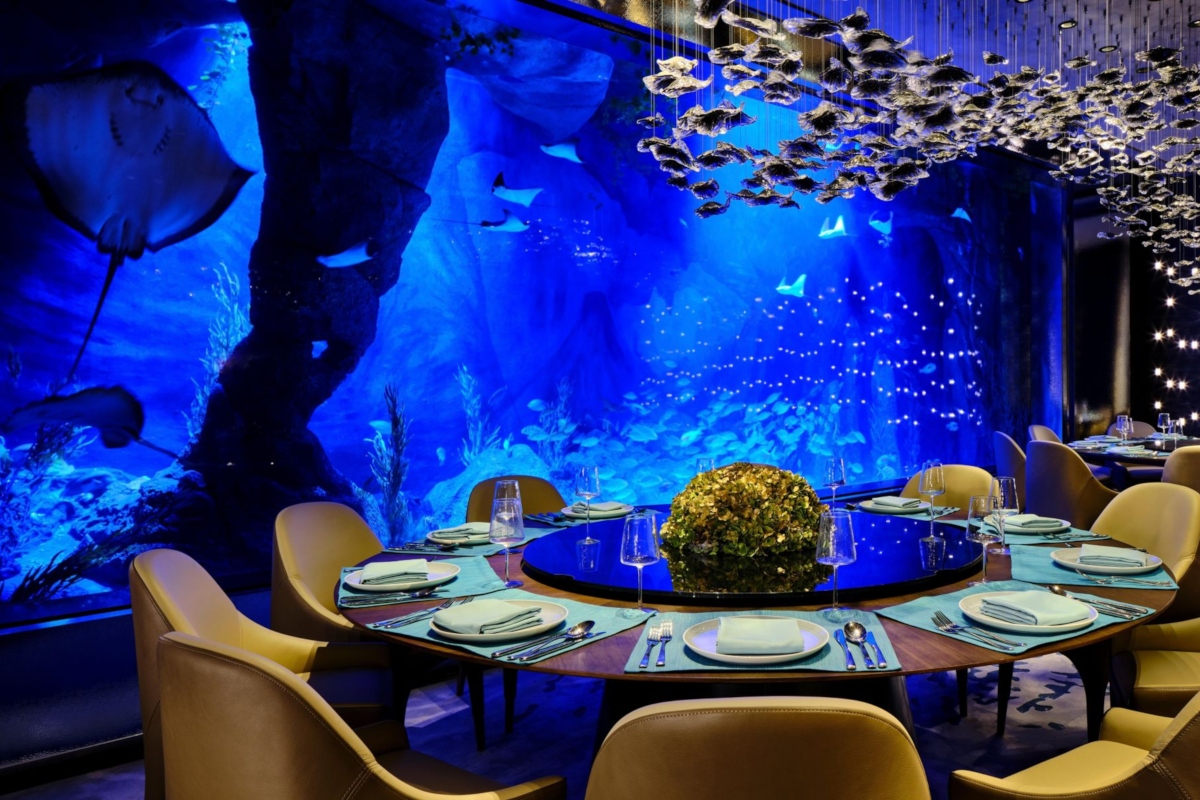 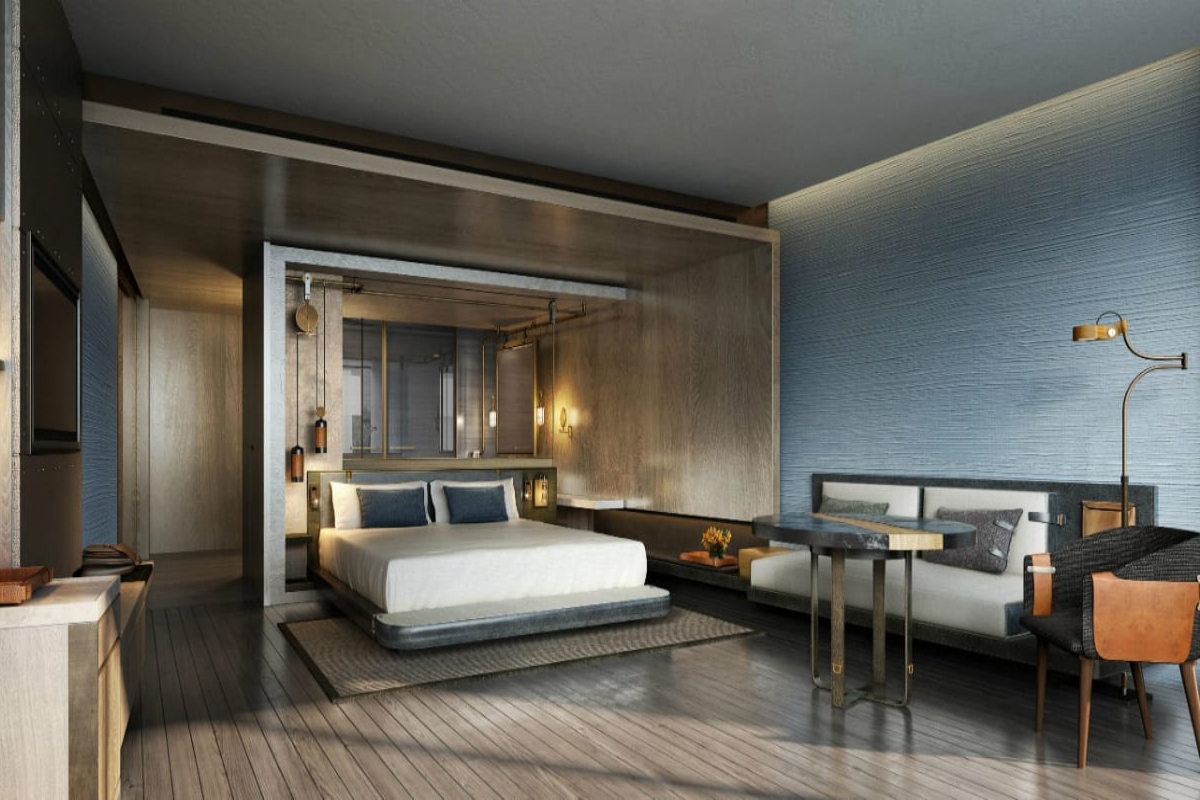 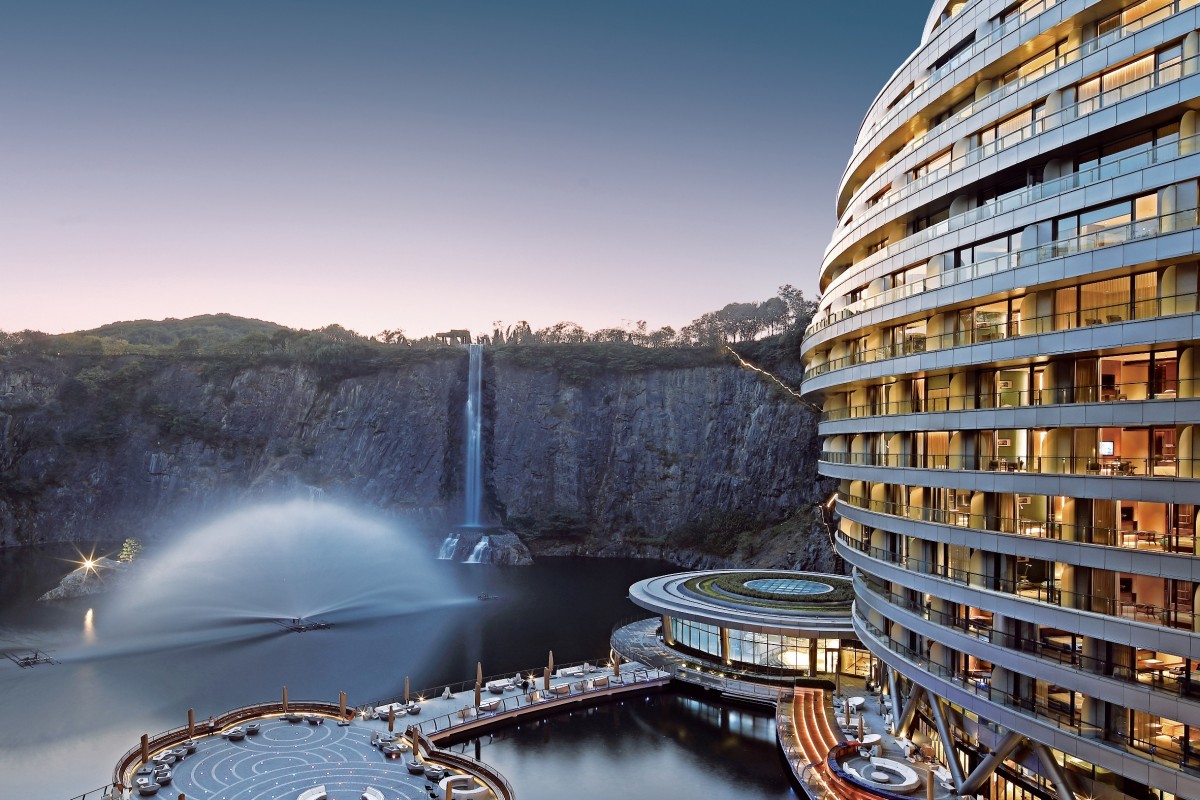 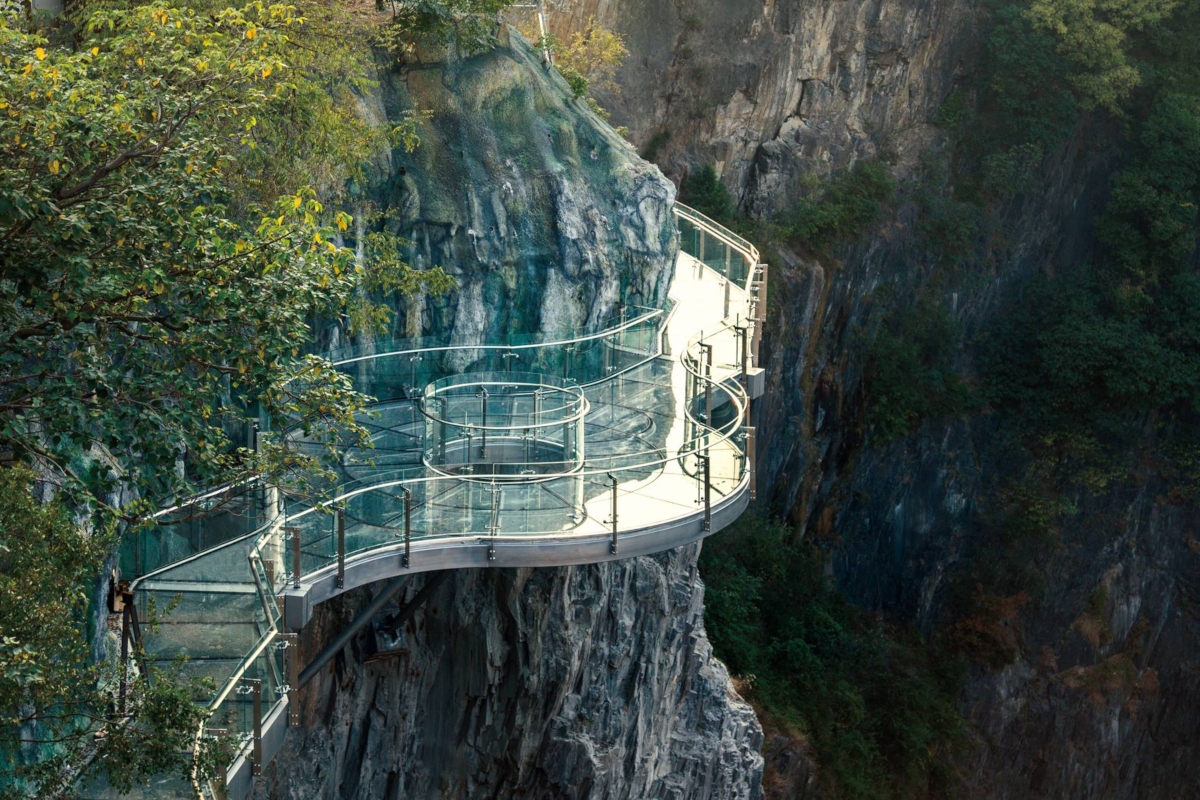 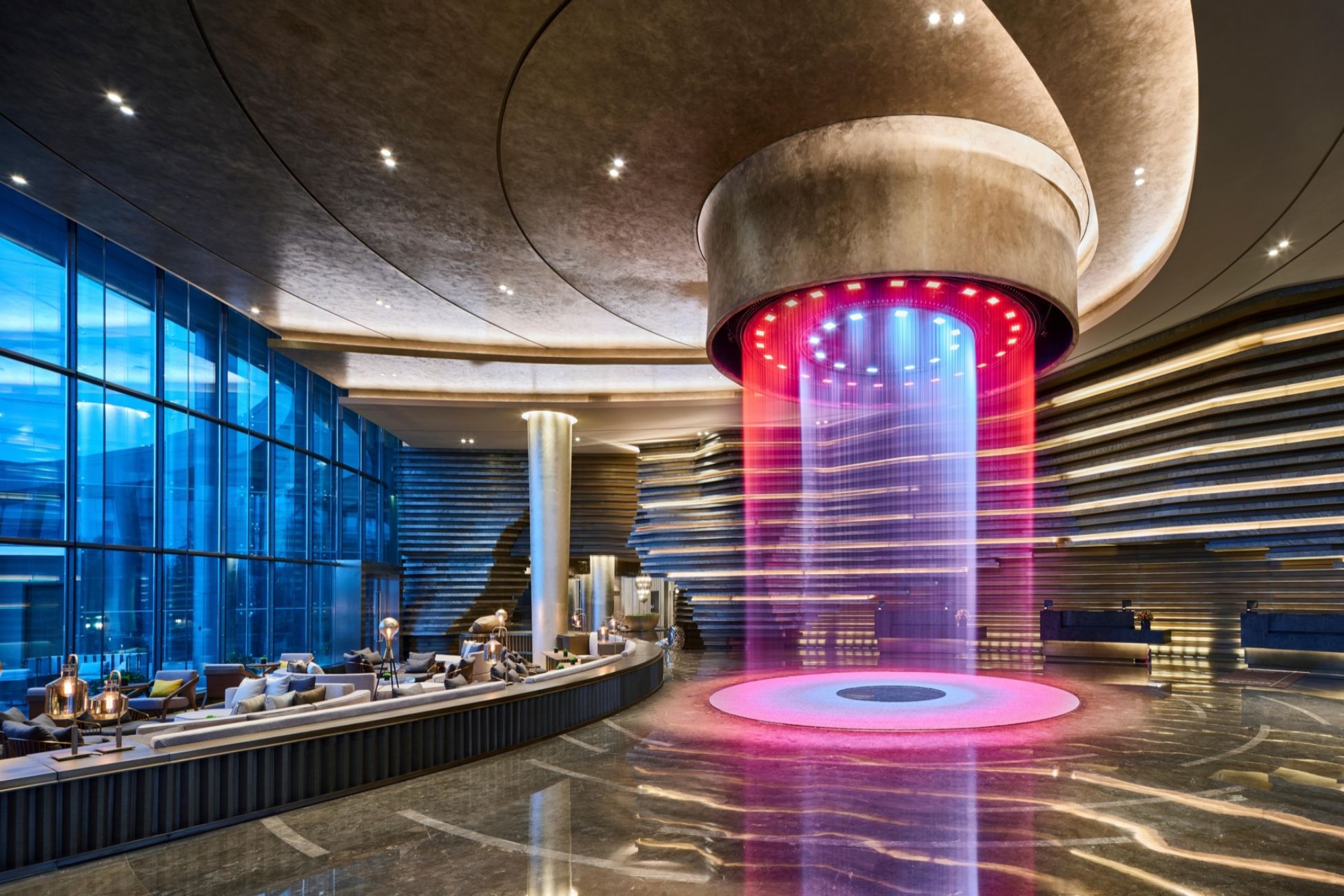 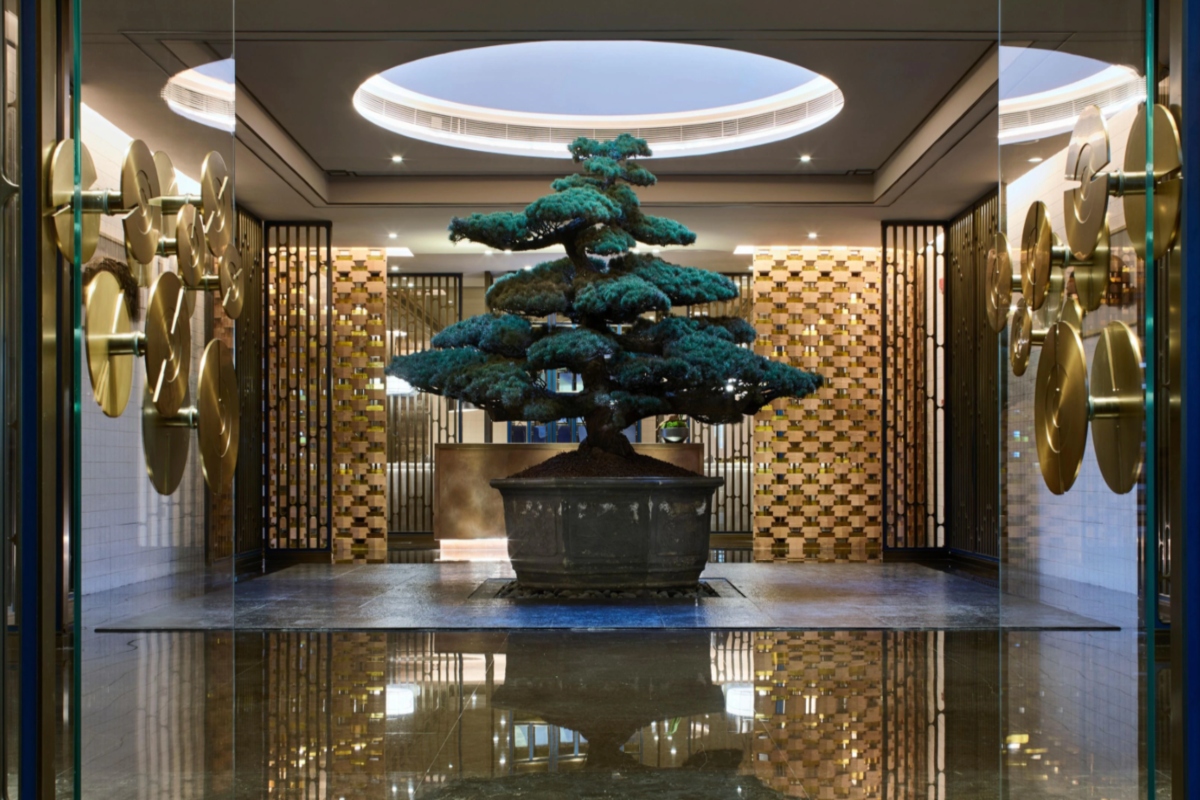 Geared towards eco-conscious travellers, every element of the 61,000-square-metre resort has been designed to reduce impact on the environment.

Its unique positioning maximises sunlight and minimises the effects of the cool north winds. The hotel even intends to generate its own geothermal and solar energy to power everyday functions.

While a majority of construction has been kept within the disused pit, there’s also a green rooftop that disappears into the surrounding landscape.

And there’s plenty of nature to explore nearby – from the Sheshan hills and Sheshan National Forest Park to the stunning Chenshan Botanic Gardens.