A rare look inside the world’s largest superyachts

From helipads and elevators to onboard gyms, wine cellars and cinemas, take a look inside some of the grandest superyachts sailing our oceans.

If you spent your lockdown days sprawled along the upper deck of your sleek superyacht as it bobbed in the warm Mediterranean waters, you certainly weren’t alone.

While the pandemic may have initially shaken the foundations of the superyacht industry, the 2022 Global Order Book confirms a total of 1,024 projects underway, representing a 24.7 per cent rise compared to the previous year.

Impressively, more than 40 kilometres of superyachts are expected to be constructed over the coming years as orders surged towards the end of 2020. One explanation for this is the impacts of travel restrictions and lockdowns, increasing the appeal for privately owned COVID-safe vessels.

Largest yachts to grace the seas 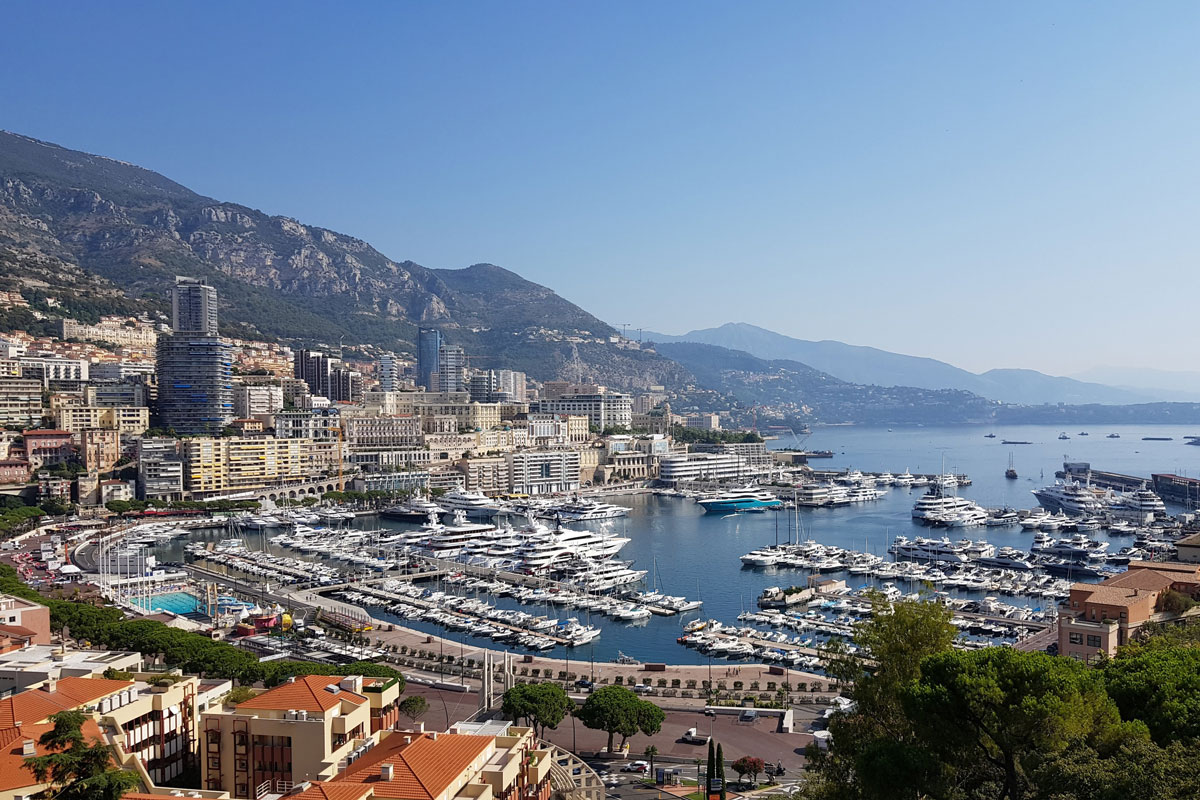 German shipyard Lürssen boasts the largest superyacht projects with the highly confidential 158-metre Project Blue due to be launched in 2023. However, Norwegian-based Vard’s REV Ocean (182.9 metres) will be in full operation by 2024. Some of its unique features include its advanced research equipment and fuel-efficient design.

Whether they were built in 1865 or 2013, the largest recorded yachts capture timeless appeal and a luxurious lifestyle that goes hand in hand with the experience of sailing at sea. 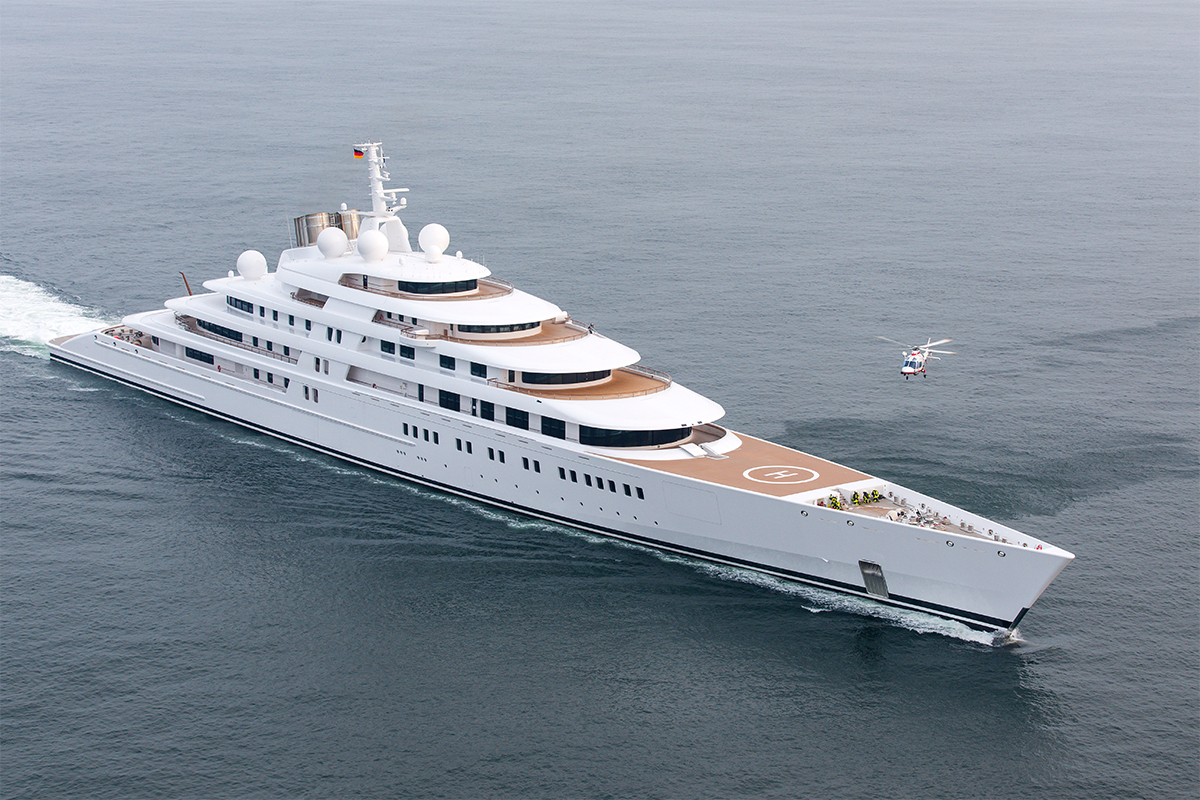 Built in under three years, the world’s longest superyacht was designed to travel at great speed in warm, shallow waters with the interior remaining a mystery. The yacht’s luxurious 19th century Empire-inspired interior was designed by Christophe Leoni while Nauta Yachts was responsible for its modern, sleek exterior. This multi-award-winning luxury Eclipse held the title of the world’s largest superyacht until Azzam assumed the position in 2013. All exterior and interior design work was undertaken by London-based Terence Disdale Design, and it’s believed it took five years to construct at the Hamburg shipyard. 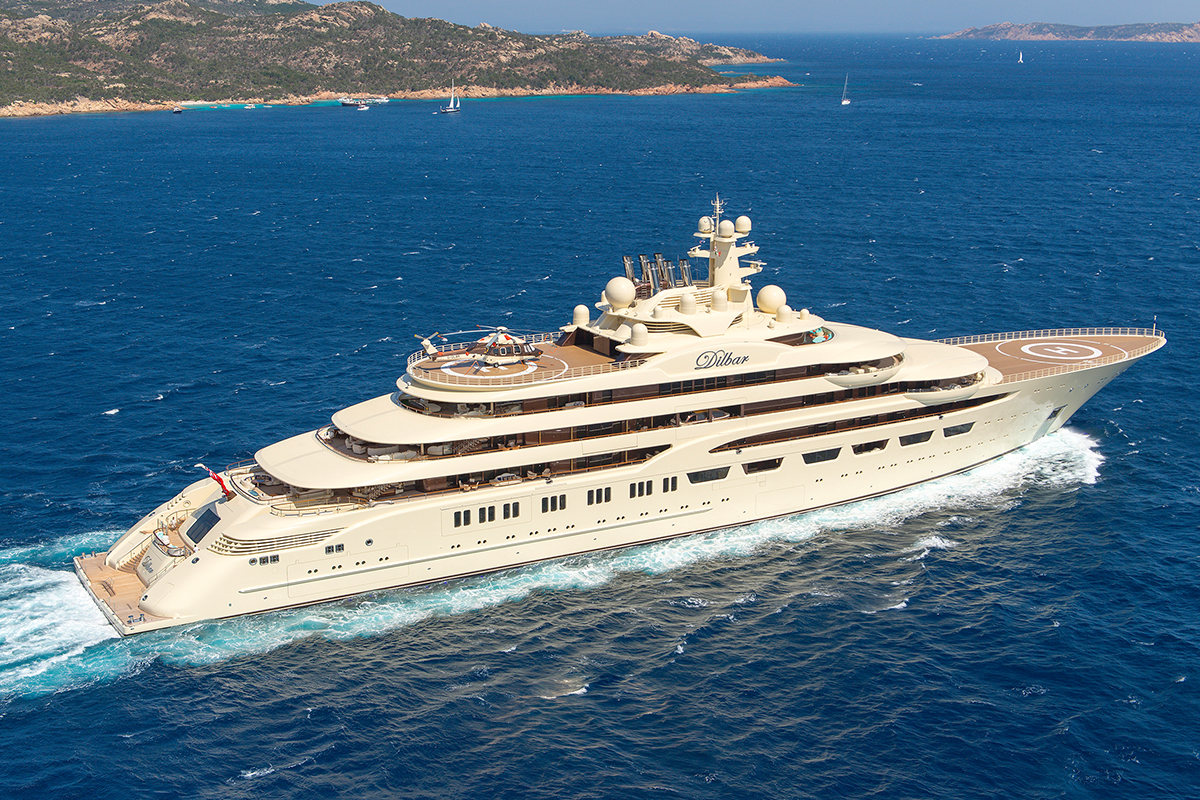 At 15,917 tonnes, Dilbar is considered the world’s largest yacht in volume. With a 30,000-kilowatt diesel-electric power plant, it’s able to travel at a top speed of 22.5 knots. The Lürssen yacht was under construction for more than four years, with Espen Øeino International responsible for the exterior, which is defined by its light ivory hue with bronze accents. Winch Design took command of the exclusive interiors.

Length: 156 metres
Country and year made: Germany, 2016
Builder: Lürssen
Features: 25-metre swimming pool – the largest ever to be found on a yacht – and two helipads
Speed: 22.5 knots
Owner: Alisher Usmanov, Russian billionaire worth US$16.9 billion 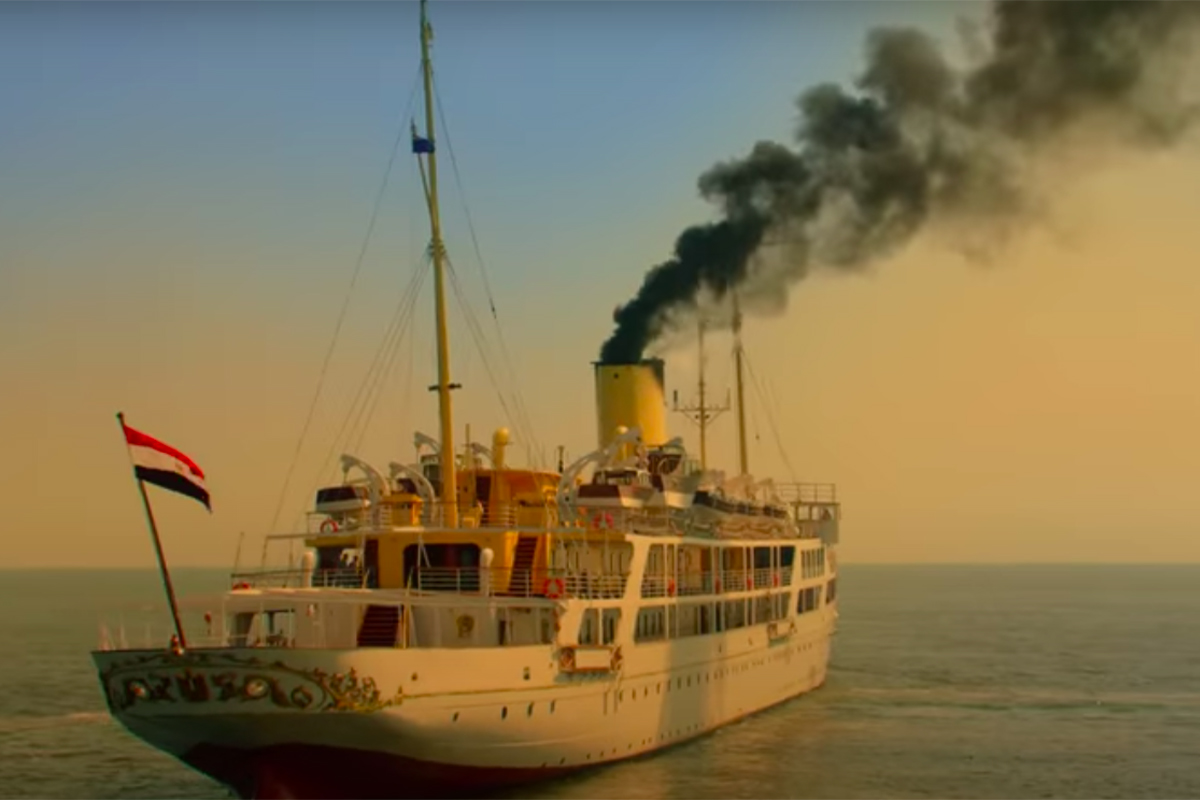 Known as the pearl of the Egyptian navy, El Mahrousa was built by the Samuda Brothers at their London shipyard in 1865, but has been lengthened and rebuilt at different points throughout its history. Anchored in Alexandria, it’s the Egyptian Presidential Yacht and has received many dignitaries, having made its presence known at the opening ceremony of the Suez Canal in 1869 and representing Egypt at the 1976 Bicentennial Fleet Review in New York. The exterior appearance reflects the work of Oliver Lang. 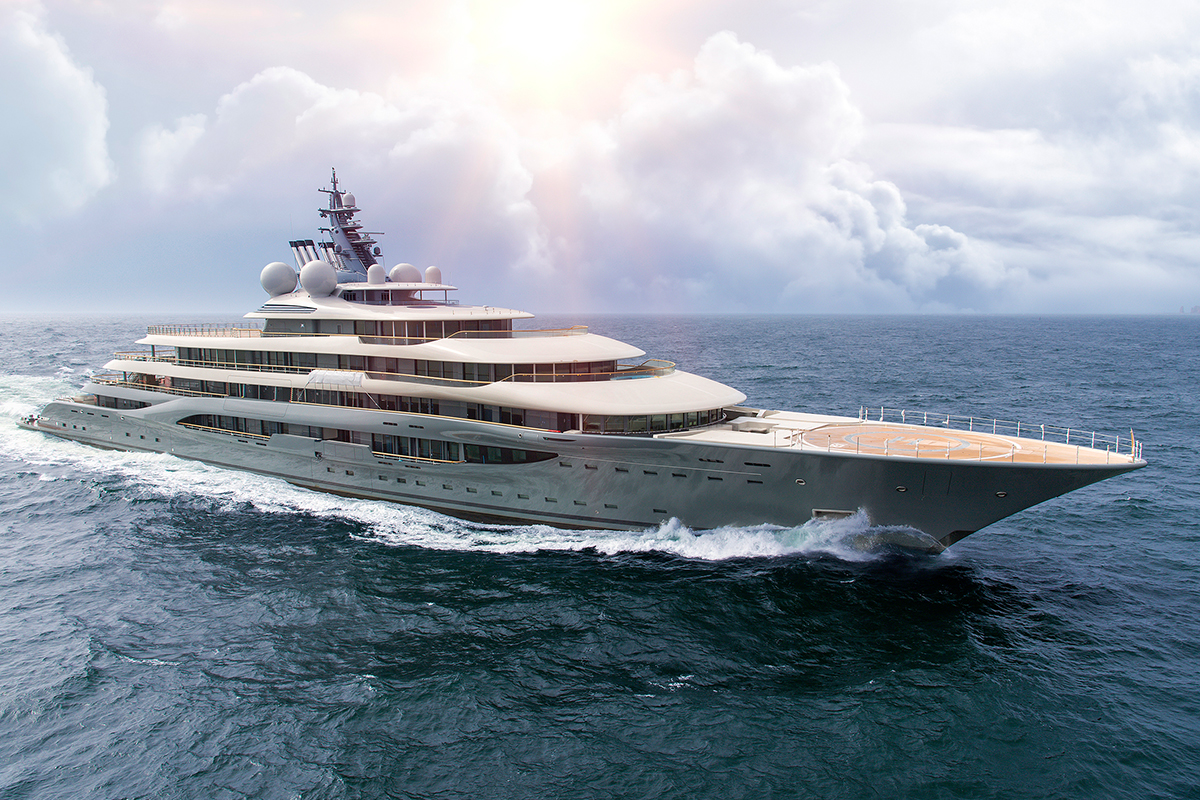 Designed to stir the emotions of observers, the yacht’s spectacular appearance reflects the work of Italian design studio Nuvolari Lenard, which conceived its unusual bow design and black painted arch. This royal yacht belongs to the ruler of Dubai and was constructed in the UAE and styled by UK-based Winch Design. The luxury vessel was originally a Blohm+Voss project that was sold to the Dubai government and delivered by Platinum Yachts. 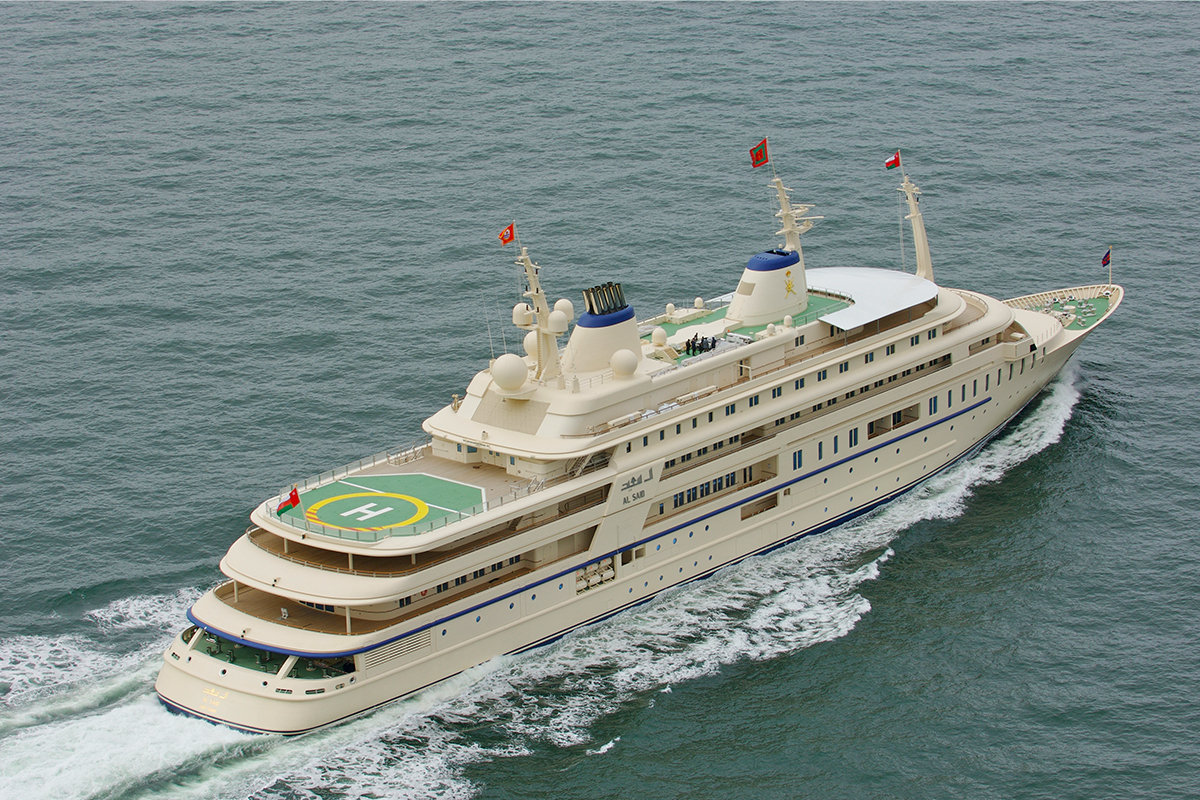 Given the name ‘Project Sunflower’ during the construction phase, Al Said has classic cruise liner features by Espen Øino International and interiors designed by Redman Whiteley Dixon. It is the Oman Royal Yacht Squadron’s main vessel and is docked in Muscat. With large entertainment spaces, the Lloyd-classed yacht can accommodate up to 65 guests. 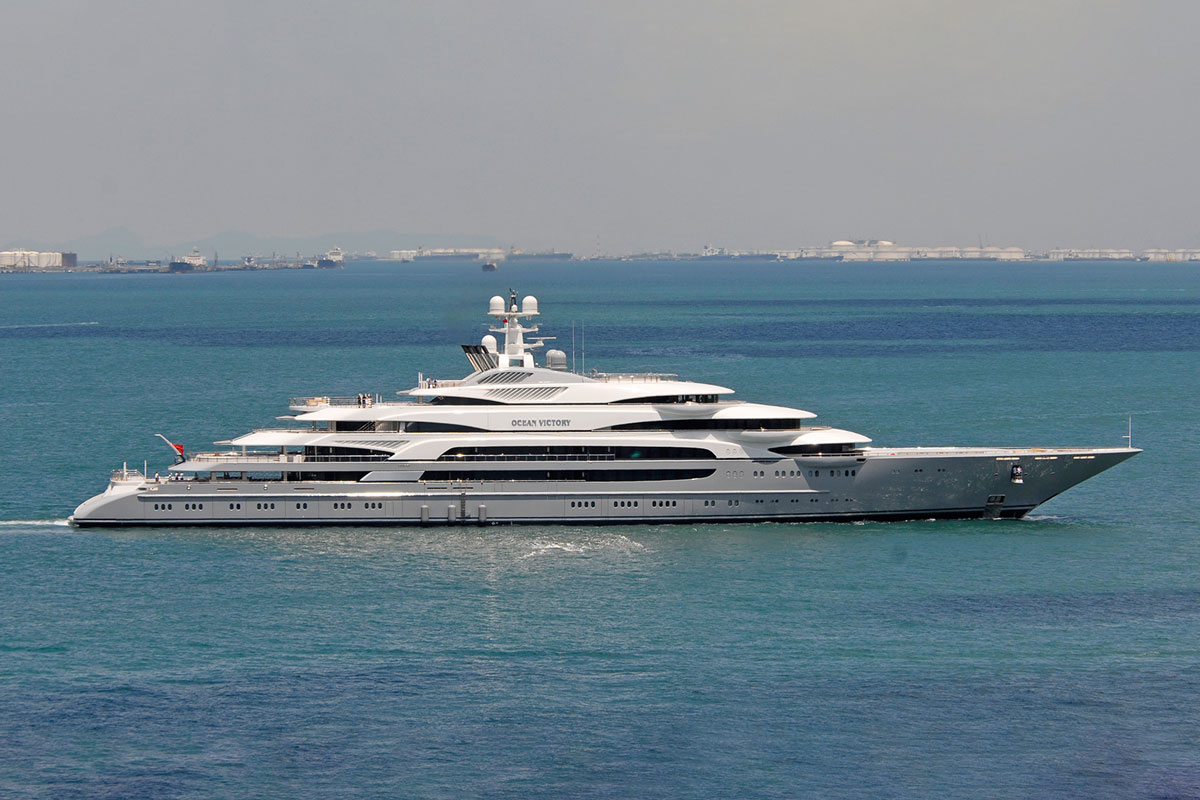 Characterised by its high-tech content and innovation, Italy’s largest yacht is equipped with a certified helideck and internal heli hangar as well as a total of 42 cabins for guests and crew. Featuring both functional and design elements, Ocean Victory’s exterior was developed by Espen Øino International and interior designer Alberto Pinto, and meets the Passenger Yacht Code. 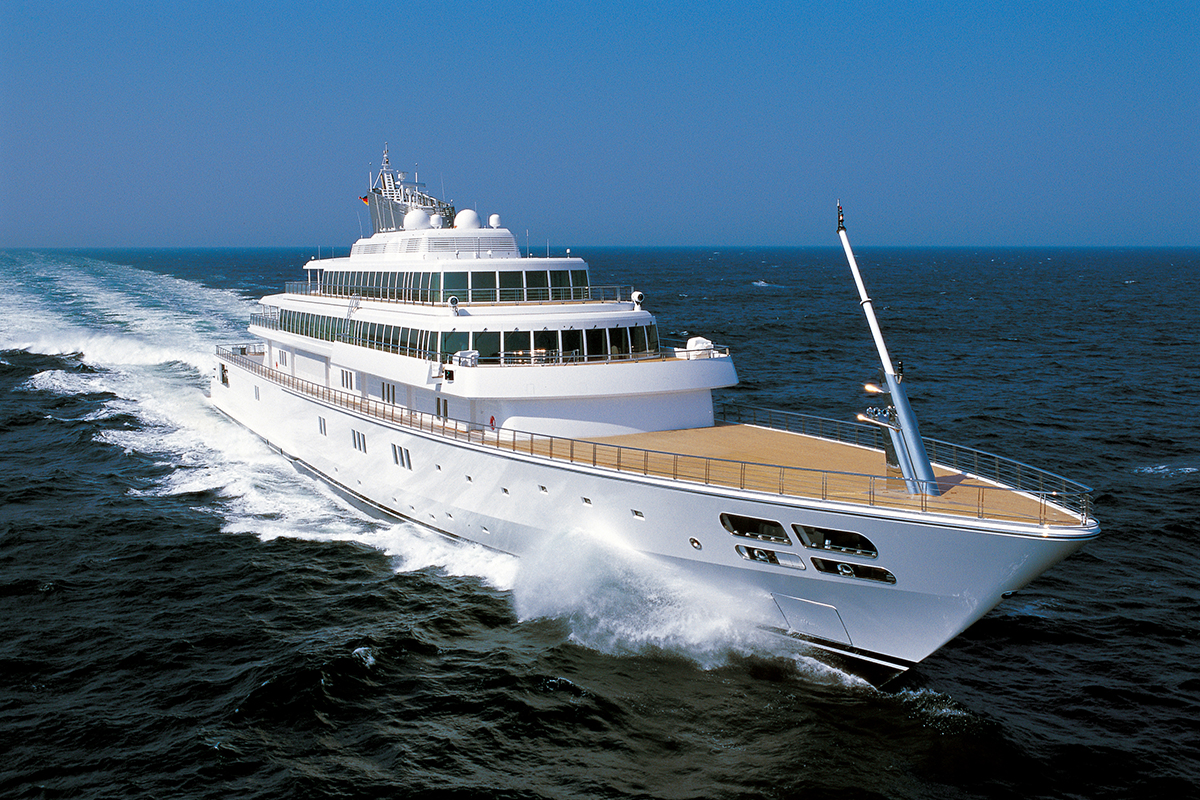 Built by Lürssen in 2004, the luxury yacht is powered by four MTU diesel engines of 12,230 horsepower, enabling it to travel at a top of 28 knots, with a cruising speed of 26 knots. Before it was fully acquired by David Geffen, who self-isolated on Rising Sun in the Grenadines in the midst of the pandemic, the original owner was Oracle Co-Founder Larry Ellison. Legendary yacht designer Jon Bannenberg developed the exterior, characterised by rows of windows, while its interiors were designed by Laura Seccombe.

Read Next: Top destinations to find the superyacht crowds during the Northern Hemisphere summer