It began last Friday when a dude named Jack Posobiec, described on his own Periscope TV page as “Special Projects Director at Citizens for Trump”, tweeted a video in which he made the claim that “‘Star Wars’ writers rewrote and reshot Rogue One: A Star Wars Story to add in anti-Trump scenes calling him a racist.”

From the start, anyone not in an induced coma should have smelled a rat, the very idea of Donald Trump making any sort of appearance in a Star Wars film being off-the-chart ridiculous, let alone that a sci-fi movie just weeks from release might be halted and rewritten to include such a thing.

But then, viewers should also have identified Posobiec as a man whose claims should be received with caution; last month, he turned his camera toward the ludicrous story about Hilary Clinton running a child sex ring out of a Washington pizza joint, the intrepid ‘citizen journalist’ believing there was “something funny” about kids coming and going from a pizza place with ping pong tables. This pristine episode of fake news ended when a heavily-armed nutter drove hundreds of miles to rescue the ‘victims’, only to find happy kids playing ping pong and eating pizza at the end of his smoking barrel.

But it’s doubtful too many actually watched Posobiec’s 18-minute video about Rogue One — once they’d seen Posobiec’s tweets and spotted the hashtag, the mutiny was on, and by Saturday night #DumpStarWars was trending from LA to New York City. Thousands of Trump supporters are now planning on boycotting the film, fans who’ve been following the Star Wars series for decades sacrificing their own harmless obsessions on an altar whose holy trinity is Donald Trump, fake news and an idiot. 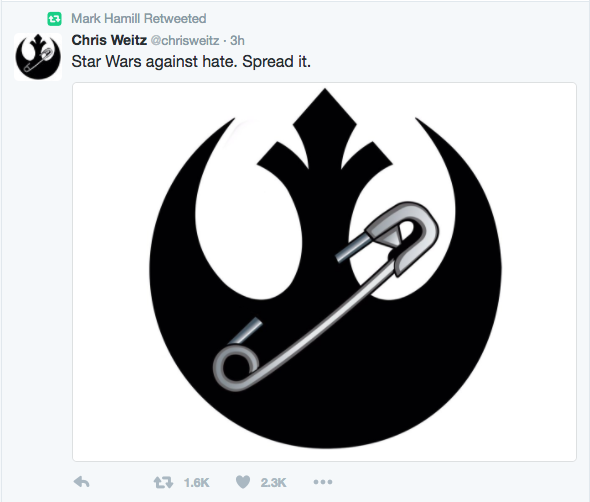 Writers also changed their Twitter avatars to a Star Wars rebel insignia with a safety pin attached, the safety pin having become a “safe place” signal to oppressed minorities since Trump’s election

As with most myths and legends, a kernel of truth can be found deep under the steaming pile. Just days after Trump’s election of November 8, Hollywood Reporter picked up on the fact that one of the Rogue One writers, Chris Weitz, had tweeted: “Please note that the Empire is a white supremacist (human) organisation”, with Gary Whitta, another writer on the project, responding: “Opposed by a multi-cultural group led by brave women.” The writers also changed their Twitter avatars to a Star Wars rebel insignia with a safety pin attached, the safety pin having become a “safe place” signal to oppressed minorities since Trump’s election, but one that also echoes the signature fashion statement of the punk rock movement in the 1970s. 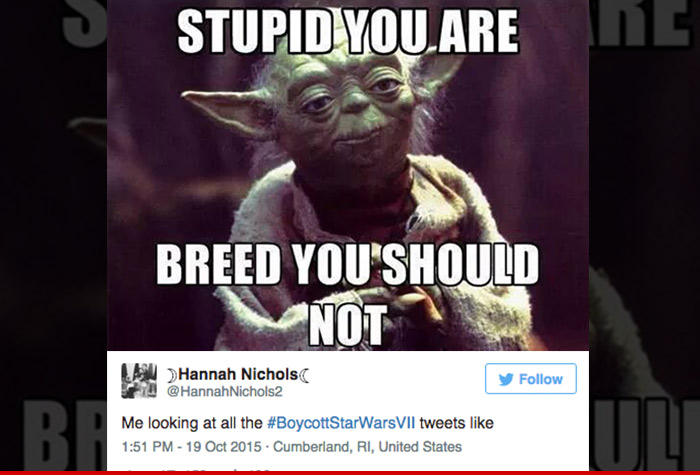 Despite a complete lack of evidence that any actual rewrites of Rogue One took place, it’s proved all too much for the so-called “alt-right”, who appear to have suddenly woken up to what they feel the Star Wars allegory has been peddling all along: anarchy, rebellion, powerful women, bad guys who look like the KKK and good guys who look suspiciously un-American — or, as one Twitter freak so mischievously observed; “Star Wars is about a kid converting to the religion of a bearded desert-dwelling man, joining insurgents and blowing things up”.

Denials from Disney of any anti-Trump agenda in Rogue One: A Star Wars Story have made no difference, the juggernaut now having morphed into a general belief that the film is an exercise in “Anti-White Hate Produced By Jews”. Suddenly, for a significant percentage of unhinged Americans, Darth Vader has become a hero, an unthinkable turn of events presaged last month by the Hollywood Reporter when it quoted Steve Bannon, the president-elect’s chief strategist as saying: “Darkness is good. Dick Cheney. Darth Vader. Satan. That’s power.”

Not surprisingly, early reports from the premiere of Rogue One: A Star Wars Story mention nothing of Donald Trump allusions in the film (although Entertainment Weekly reports that “at times, applause in the Pantages Theatre in Hollywood was so loud that it drowned out the rest of the dialogue”, leaving open the possibility that Trump’s name might have been buried by the sound of the ovations), but some have pointed out the gender diversity and multiculturalism in the cast, which is bound to make someone angry. 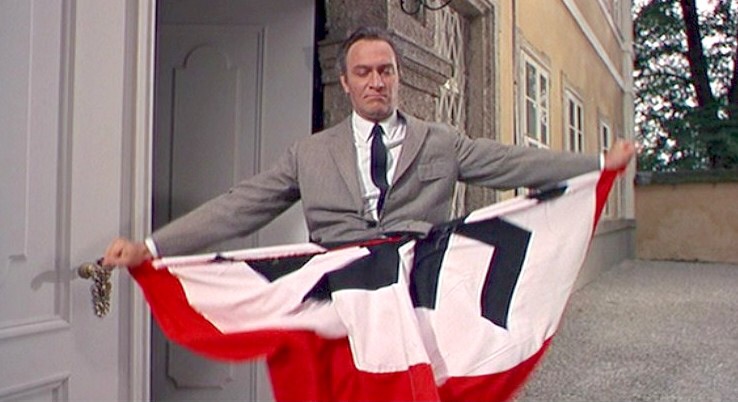 One wonders what punishments the “alt-right” has got in store for Julie Andrews and Christopher Plummer once they’ve taken a closer look at The Sound of Music.