Elon Musk’s SA battery proves it pays to be social

Elon Musk’s big SA battery shows Twitter’s reach and influence. Which is why your company should be looking for opportunities on the platform, writes Fi Bendall. 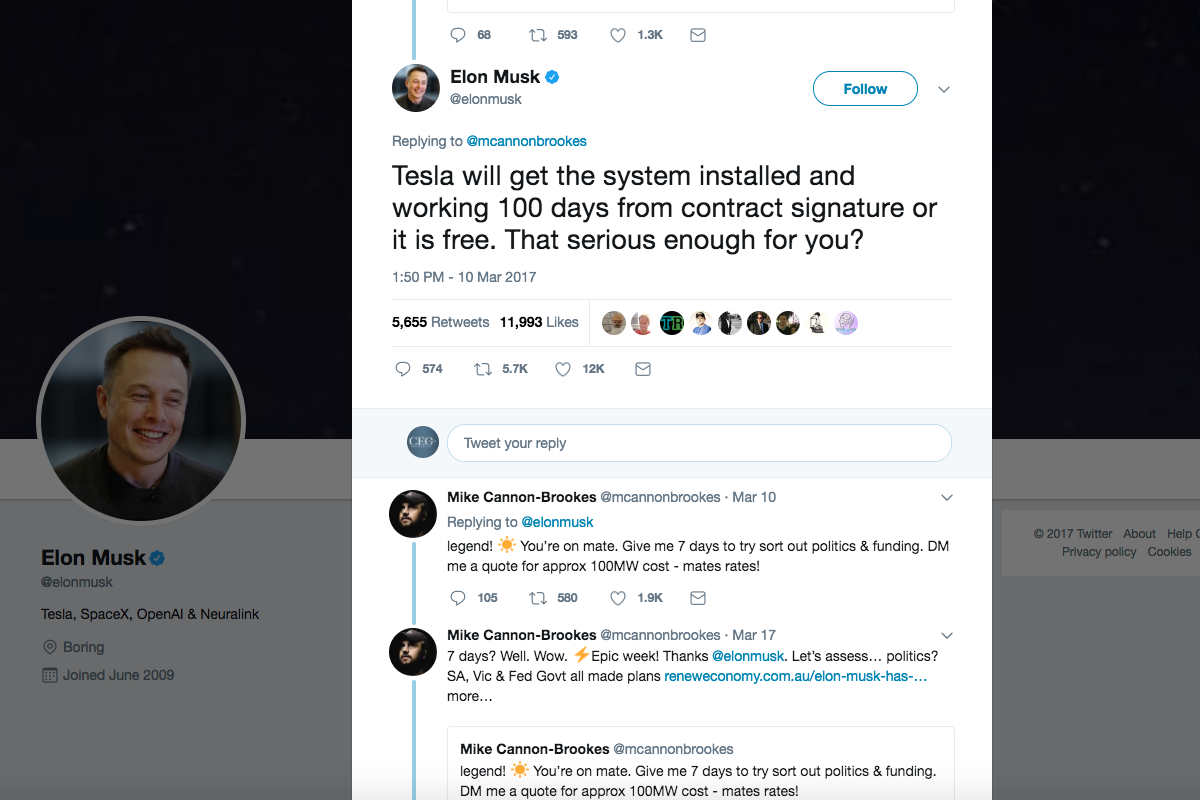 From all appearances, Elon Musk's promise of a super big lithium ion battery to keep the lights on in South Australia started with some Twitter banter between him and Atlassian's Mike Cannon-Brookes. It shows why it's worth maintaining a presence on Twitter and why your company should be looking for opportunities on the platform despite its many flaws.

CEO social media usage survey results are generally pretty damning when it comes to the lack of engagement most leaders have on social platforms, with the general consensus being they don’t have the time or interest to engage, or don’t see the value in it.

The DOMO 2016 Social CEO Report found 60% of Fortune 500 CEOs have no social media presence at all, and that only 36 of the 500 are on Twitter, with only 25 of that 36 actively engaged on the site. One of the newest members of the Fortune 500 is one of Musk’s companies, Tesla.

Musk is a busy person. He is the founder, CEO, and CTO of SpaceX; a co-founder, Series A investor, CEO, and product architect of Tesla Inc; co-chairman of OpenAI; and founder and CEO of Neuralink.

That little bio doesn’t even mention the fact he also happened to find the time to start up another enterprise, The Boring Company, in January.

So surely he must be too busy for something as frivolous as Twitter?

Aside from the fact that Musk most likely has a very tuned in and savvy social team to assist with his social endeavours, he also understands the strategic importance of social media real estate and the value of protecting and projecting his name and ideas in such a public forum.

Musk almost seems to treat Twitter as a quickfire sounding board for his thoughts and opinions. In fact, he pretty much announced the founding of the Boring Company (which digs tunnels rather than bores people) in a series of tweets.

I am actually going to do this

Boring, it's what we do

It shall be called "The Boring Company"

Traffic is driving me nuts. Am going to build a tunnel boring machine and just start digging…

Similarly, Musk was at the ready when Mike Cannon-Brookes put his feelers out on Twitter about Tesla saying it could help the citizens of South Australia out with their energy grid problems.

Cannon-Brookes was responding to an article in the AFR in which Tesla's vice-president for energy products, Lyndon Rive, said the company had the battery technology to shore up South Australia’s faltering energy network. Things quickly snowballed from Cannon-Brookes’ first tweet with Musk backing up Rive’s claim and putting his name to it as well.

It was the perfect illustration of how quickly things can happen on Twitter and why the platform is so good at getting people together and conversations happening.

Less publicised in Australia was the recent example of Musk acting upon a customer complaint on Twitter about congestion problems with Tesla’s electric charging stations in California. Once again, Musk was at the ready, listened to the complaint, and within a week Tesla’s policies had been rewritten to address the issue. Now that’s how you do customer service on Twitter!

So if you’re a CEO who values what your customers are saying about your company, and you want to give a decent account of yourself and your company in the public domain, it might be time to take a tweet from Elon Musk’s social media playbook.