JacketGate is about misogyny? Come again?

The furore over a world-famous stoush between TV presenters is now being blamed on men, but that’s nonsense, writes Jack Marx 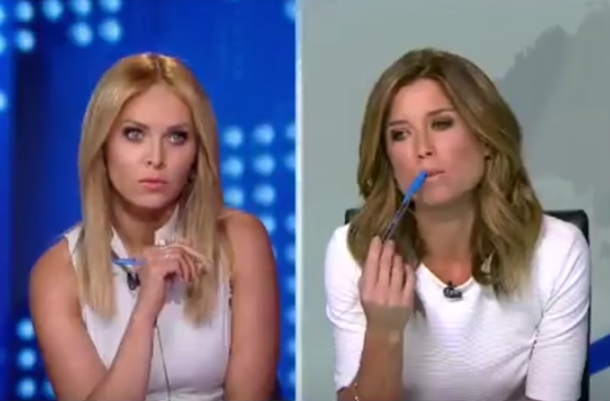 Near everyone in the English-speaking world has now seen the incident known as JacketGate, in which two Australian female television reporters make like Jew and Arab over the fact they’re wearing the same coloured frock.

For mine, it doesn’t touch this insane moment from a few years ago when two on-air reporters in New York went feral on each other, but it was good fun to watch, and not a little bit revealing of what life’s really like behind Colgate-and-Summer-Glow world of TV journalism.

But if you thought this was nothing more than an entertaining moment of bitchiness between two colleagues, you’re not thinking hard enough, according to Sarah Thomas at the Sydney Morning Herald:

“The fervour and vigour of the response to the Nine News leaked footage has been an absolutely fantastic display of women-hating. Good job everyone, well done, a round of applause to you all. It's nice to see that in 2017 belittling women in the workplace, or in any place, is still defiantly loud and proud … there's something very, very sinister about the glee with which this story has been embraced. The story is demeaning, belittling and amounts to a display of dangerously insidious misogyny.”

Come again? Two women engaged in a daft spat about their outfits is a moment of misogyny? How does that work? Like this, apparently:

“But, of course, women arguing will be pitched and enjoyed as a catfight, even though in this case it actually amounts to two professionals asserting themselves. Would such a response have happened if it were men? No, of course not. Men in the workplace are assertive and in control, women are bossy or bitchy, remember?”

Fiddlesticks. When James Packer and head of Nine Entertainment David Gyngell had a punch up in 2014 it was front-page news for weeks, and nobody ever referred to that embarrassment as “two professionals asserting themselves”. Nor did anyone accuse Ron Casey and Normie Rowe of being “assertive and in control” when they boxed on in front of a live TV audience some years ago. When men in the media make five-star dills of themselves, they get called out on it, and rightly so.

But even if it were so – that it was true men in the media are viewed seriously while women are regarded as bell-ends – how does that make men responsible for the whole world giggling at a ludicrous row over clothes? Because men built the internet? Are we to blame every Hitler meme and mindless inspirational quote on Leonard Kleinrock and J.C.R. Licklider?

“I feel sad that for these two women their tremendous, admirable career achievements might now be permanently overshadowed with this nonsense. Will the colour white really come to define their careers, over all their hard work, experience and skill?”

Well, I dunno. I seem to recall the same argument being mounted in the defence of college rapist, Brock Turner, his father pleading that his son’s sentence was “a steep price to pay for 20 minutes of action out of his 20 plus years of life.” Nobody gave Mr Turner much applause, because most people understand that foolishness tends to be measurable in seconds, its effects rarely taking instruction from the history of the fool.

But all of this is laughable chinstroking about a simple silly moment caught on tape, which is no more a product of misogyny than the tantrums of Nick Kyrgios are the fault of Germaine Greer. People in the broadcast media – both men and women – tend to be shocking prima donnas, their appearance often of greater import than the news their imparting. This is no news flash.

So what might make an otherwise reasonable entertainment reporter write such a stupid column, holding the patriarchy responsible for an asinine barney between female colleagues?

One could argue, I suppose, that misandry is the cause of it, that hardcore feminism is responsible for this particular journalist’s momentary column of custard.

But you won’t find me arguing so, because, like everyone else in the media, I don’t want to look like an idiot.

It’s the most sensible line in the whole column.