You really can be what you want to be

The lie that motivational speakers, life coaches and teen songstresses have been telling us for years has finally come true, writes Jack Marx. 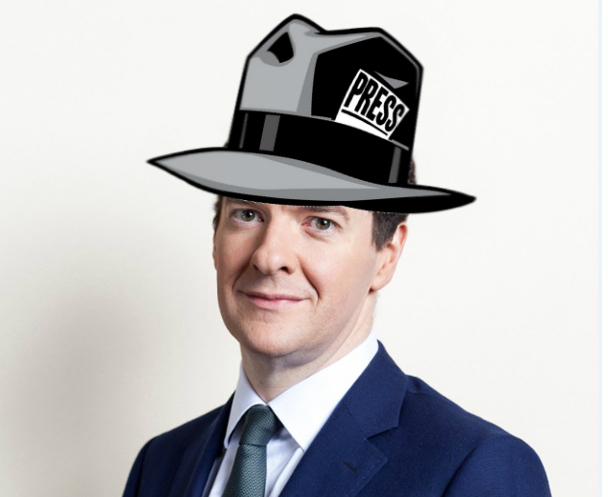 This month, George Osborne became the editor of one of the world’s most famous and long-standing daily newspapers, The London Evening Standard. To have risen to such a height in journalism is a feat that normally deserves warm congratulations, but 45-year-old Osborne’s promotion deserves more applause than usual, for the dude’s never done a single day’s journalism in his life.

After finishing school in 1993, the 22-year-old Osborne applied for a journalism traineeship at The London Times, but was shown the door, and as far as anyone knows that interview represents the entirety of his experience on the floor of a newsroom. For the last 23 years, the born-into-privilege Osborne has had to content himself with gadding about as heir to the Anglo-Irish baronetcy of Ballintaylor and Ballylemon (created by Charles I in 1629), squatting on top of a personal fortune of around £4 million (thanks to a trust fund financed by Osborne & Little, the wallpaper company founded by his dad, at which Osborne has never toiled), and being the son-in-law of the Tory peer, Lord Howell.

Despite being described by one newspaper columnist as “unreliable … untrustworthy … to coin a phrase, a dolt”, Osborne rode on a river of toffee into a seat in British Parliament in 2001, becoming the youngest Tory MP of his day (his peers called him “Boy George”). Somehow, Osborne surfed his own tidal wave of financial scandals all the way to becoming Chancellor of the Exchequer in 2010, a job he held until Theresa May bumped him to the backbench in 2016. Since then, Osborne has embarked on a lucrative career as a public speaker and adviser to various boards and think tanks – notably BlackRock, the world’s largest fund manager – making him last year’s highest paid British MP.

The conflicts of interests are clear – a sitting MP and corporate board hog editing a daily newspaper – but they don’t seem to worry Osborne. Nor does his complete lack of experience as an editor. As The New York Times reported this week:

Mr Osborne immediately made it clear that he would not be giving up his job as Member of Parliament for Tatton, a constituency nearly 200 miles northwest of London. His logic was impeccable: An evening paper is on the streets by lunchtime, so it would, he considered, be an easy matter to start the day at 5 am and edit the paper in the morning before turning to affairs of state in the afternoon.

One can’t really blame George for grasping his childhood journalism dream by the throat; the question is why his employers have hired him. But, being that The Evening Standard is now owned by Russian "hooligans" with former links to the KGB – one of which inexplicably dressed up as a matador while reporting about bullfighting in Spain, to the amusement of his hosts – the answer is anyone’s guess.

Perhaps, rather than being any sort of comment on the state of today’s media, Mr Osborne’s elevation to the pinnacle of journalism is moreso a reflection on the world as a whole, a place where a real estate salesman can become President of the USA, a blogger and film producer can earn a seat on the Joint Chiefs of Staff, scientists can be chased from their chairs by nincompoops and the President’s daughter can become his chief adviser, sitting in on meetings with the giants of world politics, the only credential Ivanka sharing with her predecessors being that she didn’t die of Sudden Infant Death Syndrome.

In this world, there’s nothing stopping Lady Gaga from heading the neurosurgery unit at Johns Hopkins Hospital, or NASA’s mission control at Houston being staffed entirely by past contestants of My Kitchen Rules.

All you have to do is dream, while the world goes cold.