Sorry Tina Fey, you can’t have your cake and eat it too

Cake-eating Tina Fey on SNL will go down in history as one of late-night comedy’s shining moments, but it’s not satire, writes Jennifer W. Neal. 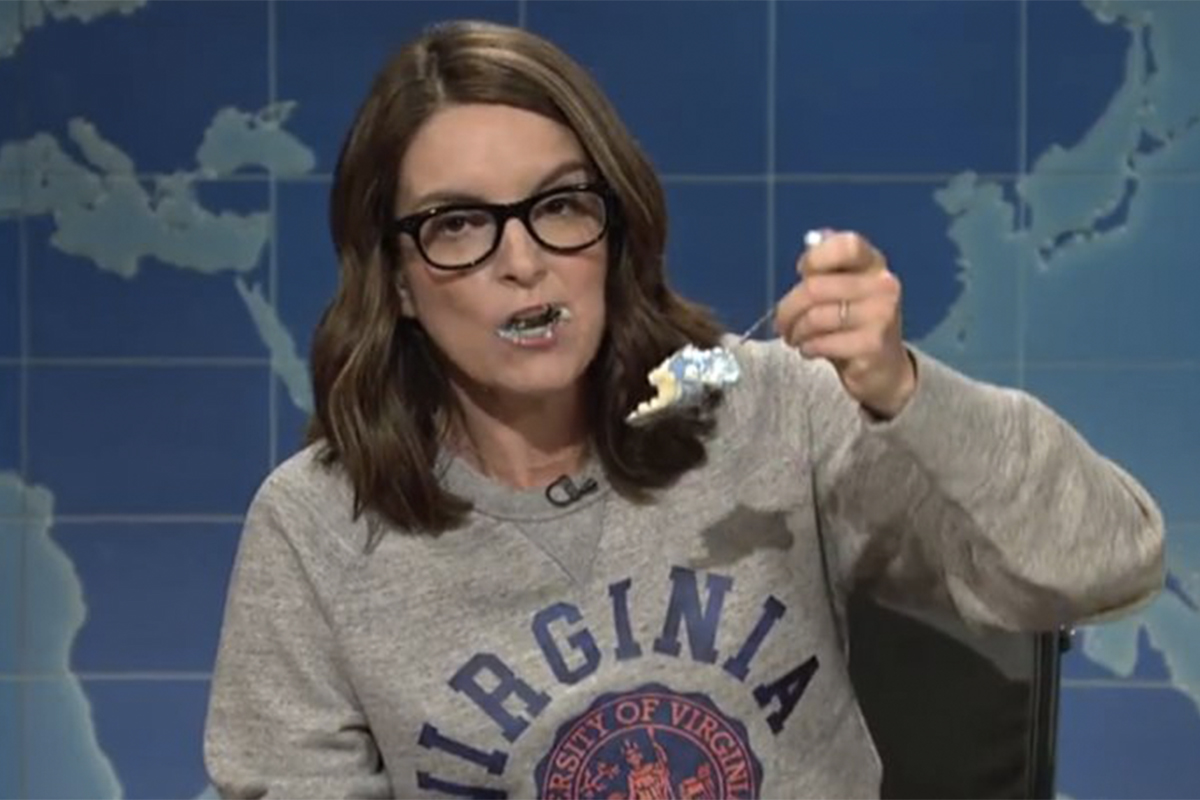 Unlike the alt-right, Barnaby Joyce, and anyone else without a sense of humour, I still believe that SNL has some relevance. Sure, Mad TV was better. Long gone but not forgotten, In Living Color was the ultimate comedy showcase in diversity of thought, talent and physical agility (paging Jim Carrey.)

But America’s longest-running live comedy show has had many, many shining moments – especially during election season. Nobody cared who Will Ferrell was until he adopted George W. Bush’s infamous serious-but-vapid stare as he pronounced the word “strategery”. Watching Larry David handle Bernie Sanders’ time-honoured curmudgeonry was like all of my comedic fantasies had converged on one another for a bacchanal.

And Tina Fey transforming into everyone’s favourite mentally deranged soccer mom will go down in history as one of late-night comedy’s shining moments, greatest hours and golden parodies.

Which is why I take no issue in calling her latest skit on SNL exactly what it is – comedy, not satire.

Here’s the thing. In America’s national election, 52% of white female voters cast their ballots for Trump. They did so after a brutal campaign to bully minorities, specifically minority women, into supporting a candidate whose track record of fighting for minority rights mirrors a level of embarrassment that they should be owning right now. And they succeeded. The majority of minorities, across all ethnicities, cast their vote for Hillary Clinton. And the majority of white women (and, of course, men) voted for Donald Trump.

That is neither comedy nor satire.

Satire is the use of irony, exaggeration, ridicule or humour to expose and criticise someone’s vices or stupidity. At its best, it may be comical – but for the intended target of satire, it’s deeply uncomfortable and humiliating. If Fey’s cake-eating segment was satirical, then white women who voted for Trump or who passively allowed him to be elected by keeping minorities in check, and not their own peers – should be threatened, and embarrassed, not comforted.

Instead, Fey’s segment, which was funny, offered reprieve to white women who feel guilty, but are looking for absolution – not redemption. Redemption would mean taking responsibility for their actions, and telling minorities who have been fighting this battle for a couple of centuries, to take a cake break – while they address the gross power imbalances they’ve helped to create and from which they’ve benefitted. And her comedy does so at the expense of minorities who are waiting, and dying, while white women take their time to fix it.

They have not earned the right to eat cake.

The 94% of black women, 82% of black men, 69% of Latino women, 63% of Latino men, and 61% of other minorities who voted for a subpar candidate so a racist demagogue wouldn’t take the Oval Office, on the other hand, have.

They’ve also earned the right to live in a country without Nazis parading down the street… just in case you were wondering.

Leave us with the damned cake, and fix the problem you created.