With another major fashion award under his belt, Giorgio Armani, now 85, is working harder than ever to burnish his brand – and secure an independent future. John Arlidge talks to this most influential of designers. 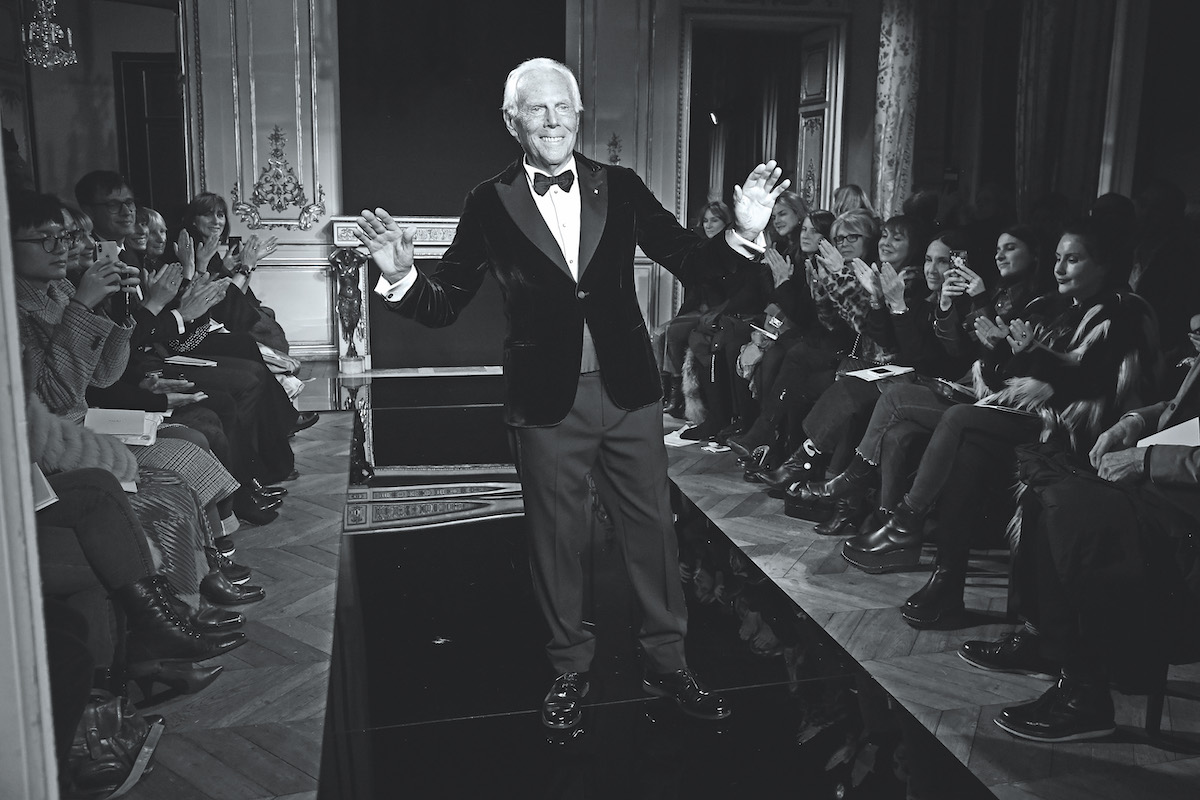 Cate Blanchett was there. So were Julia Roberts, Tom Cruise, Naomi Campbell, Naomi Watts, Kylie Minogue and Rihanna. They and many hundreds more filled the Royal Albert Hall in London last December to make a fuss of a man whose style can be best summed up as “I hate fuss”.

He more than earned his Outstanding Achievement accolade at The Fashion Awards 2019. He is the CEO, founder, chairman, creative director, chief designer and owner of a global brand Bloomberg estimates is worth US$6 billion – and the last of a generation of super-designers, still designing multiple collections under his own name, almost half a century after he started.

Whether you like his clothes or not, one thing not even his harshest critics can deny is that he is the most influential designer of the modern era because, more than anyone else, he has taken the fear out of fashion and democratised it.

In the 1970s, he became the first designer to rip – literally – the stuffing out of tailoring by introducing looser-fitting but still flattering clothes. His signature look is elegant, drapey gowns, slouchy trousers and cardigan jackets in safe colours, usually navy, greige, sand and taupe. This ‘smart but not too formal, fashionable but not edgy’ style has created a working wardrobe for a generation of women. Blame him for pant suits. It has also made men – not just David Beckham – comfortable with the idea of buying and wearing fashion for the first time. Lawyers wear Armani too.

“We need to be more responsible, producing less but better, in a more ethical way.” – Giorgio Armani

To market all his wares, Armani invented red-carpet dressing as we know it. In the early 1980s, he became the first designer to decamp to Los Angeles for Oscars week to dress the likes of Robert De Niro, Samuel L Jackson and Michelle Pfeiffer. Soon, almost every celebrity wanted to wear Armani. He went on to leverage his Hollywood connections to get into the movies themselves, creating wardrobes for American Gigolo, The Untouchables, Goodfellas, Pulp Fiction and The Wolf of Wall Street.

At 85, you might think he would be slowing down but he confesses “work is my life”, so he’s still going strong. He’s revamping his boutiques, starting on Rodeo Drive in Los Angeles. This year, he will also start creating 19 Armani/Casa apartments on Madison Avenue above his Manhattan flagship store; 260 luxury units have just been completed in a 60-storey oceanfront tower in Miami.

In spite of declining sales for many fashion brands in established markets, Armani thinks new bricks and mortar stores, such as the revamped Beverly Hills flagship, are important because “we still need to express the universe of the brand in a tactile way and that’s hard to do online. Stores introduce people to the nuances of brands. Without that, selling a €2,400 suit online is very hard.”

The new US investment comes after a rocky period for the firm. In 2016, Armani declared a 5% decline in profits. Revenues dipped 7% in 2017 year-on-year at current exchange rates to €2.35 million and gross operating profit fell 5.4% to €438 million. Armani himself admitted in a 2018 statement that he didn’t expect the company to return to growth before this year.

“My company is driven by a distinctive, personal vision. That’s the Italian way – the value we place on character, personality and individuality. I am happy to be David to the Goliaths.” – Giorgio Armani

While rejuvenating flagships, he has been closing smaller stores – he won’t say how many – and merging and consolidating lines. Armani pioneered brand diversification, splitting his label into almost a dozen mini-labels, but recent “shifts in purchasing behaviours” have made it necessary “to edit and trim down”. By “shifts in purchasing behaviours” he means the rise of online fashion retail, where having five sub-brands with different price points can confuse customers, and the decline of department stores, in which all Armani brands have traditionally had a large presence. 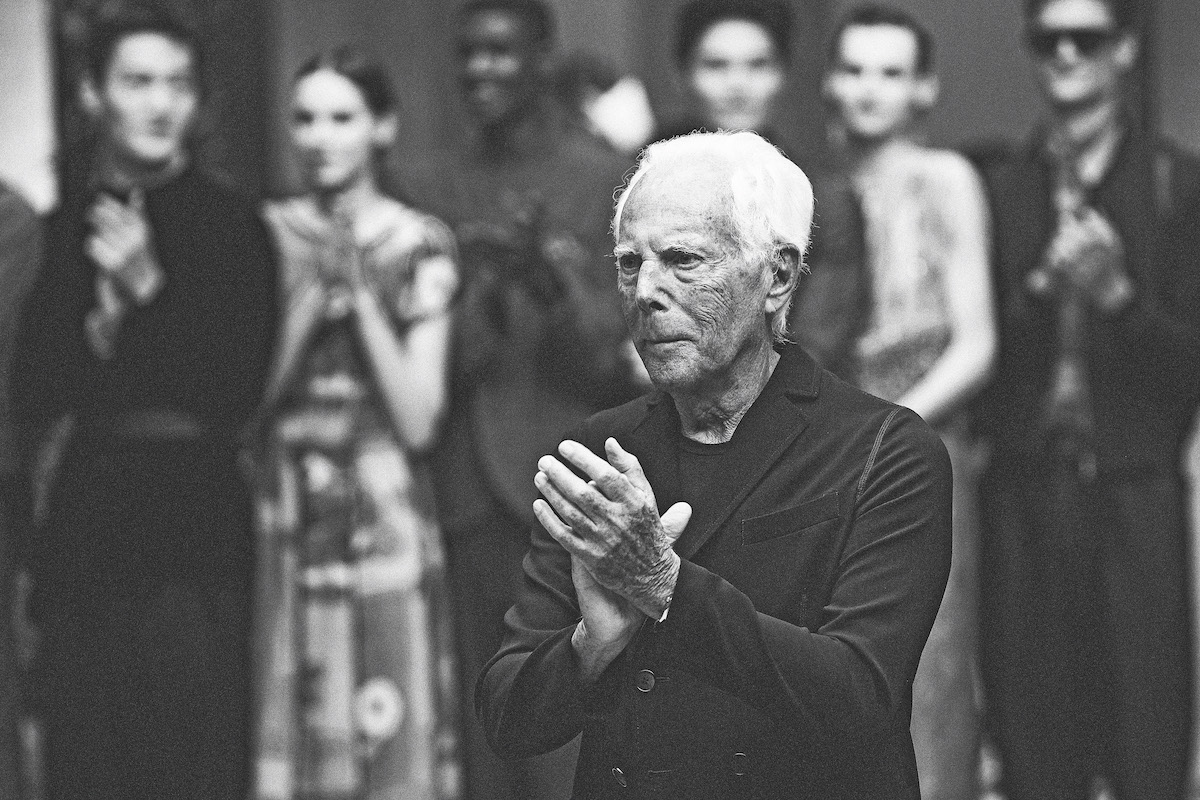 He has folded his mid-price Armani Collezioni and cheap chic Armani Jeans labels into his youthful Emporio Armani sub-brand. That leaves Emporio, A|X Armani Exchange, his diffusion line, and Giorgio Armani, his high-end line. By narrowing down to “three reference brands, the business will better able to realise its potential”, he says.

Other market trends are generating fresh challenges for ‘Il Signor Beige’. Social media-friendly designs, spearheaded by Gucci’s extravagant aesthetics under designer Alessandro Michele, are tempting young luxury shoppers away from his timeless, subtle tailoring. But he insists he won’t change his aesthetic for the Instagram generation. “I’m not affected by the fickleness of passing fads,” he smiles. “Consistency is my main strength.”

Although he and the Armani brand are active on Instagram, he insists his approach to social media differs from his rivals. He rejects using youthful social media influencers in favour of “working with actors and actresses whose personal aesthetic and personality are in tune with that of Armani. For influencers to have genuine influence, people need to believe that their opinions are authentic and this can only happen if there’s a respectful relationship with a brand.”

Armani also rejects producing multiple splashy new collections throughout the year for different market segments. With pre-collection collections and mid-season revisions, to add to Cruise and Resort, before you even get to the usual Autumn/Winter and Spring/Summer collections, there is already “too much fashion and of very little quality”, he frowns.

“The current situation is unsustainable. We have to slow down. Designer brands cannot operate like fast fashion.” He uses the word unsustainable in an environmental sense, not just a creative one. “We need to be more responsible, producing less but better, in a more ethical way. My style is timeless; my items last and are, as such, sustainable. I want to work even more in that direction.”

Armani invented red-carpet dressing as we know it.

In the early 1980s, he became the first designer to decamp to Los Angeles for Oscars week to dress the likes of Robert de Niro, Samuel L Jackson and Michelle Pfeiffer. Soon, almost every celebrity wanted to wear Armani.

Thanks to few vices – he scarcely drinks and has never smoked – and lots of exercise, Armani is as fit as any 85-year-old on the planet. But, much though he hates it, he knows he must begin making plans for the future. “I feel as energetic and committed to my work as ever, but I’m a realist.” One thing he will not do is sell his company. “I’ve had many offers over the years and still get many of them, but independence, being in control of all my decisions, is essential for me.”

Instead, he has set up a foundation, comprising key lieutenants, to steer the company forward once he is no longer at the helm. “It will ensure the group is stable and consistent with the principles that have always inspired my work. The family is deeply involved. I have written instructions for everything and am sure my heirs will do the best.”

The Armani brand is big business, alright, but can it really remain independent for much longer? In the past 20 years, most of his competitors have sold out to LVMH or Kering. Versace, another formerly family-owned Italian mainstay, has now been snapped up by Michael Kors. Even though he cautions that the recent restructuring “will take some time to settle and revenues will decline slightly”, Armani insists, “I can prosper solo. The conglomerates are corporations where personality can get swallowed up. My company is driven by a distinctive, personal vision. That’s the Italian way – the value we place on character, personality and individuality. I am happy to be David to the Goliaths.”