How Elle Macpherson went from ‘The Body’ to influential businesswoman

So influential that she’s known by just one name, Elle Macpherson delves into the raw truth of what it took to build her eponymous empire. 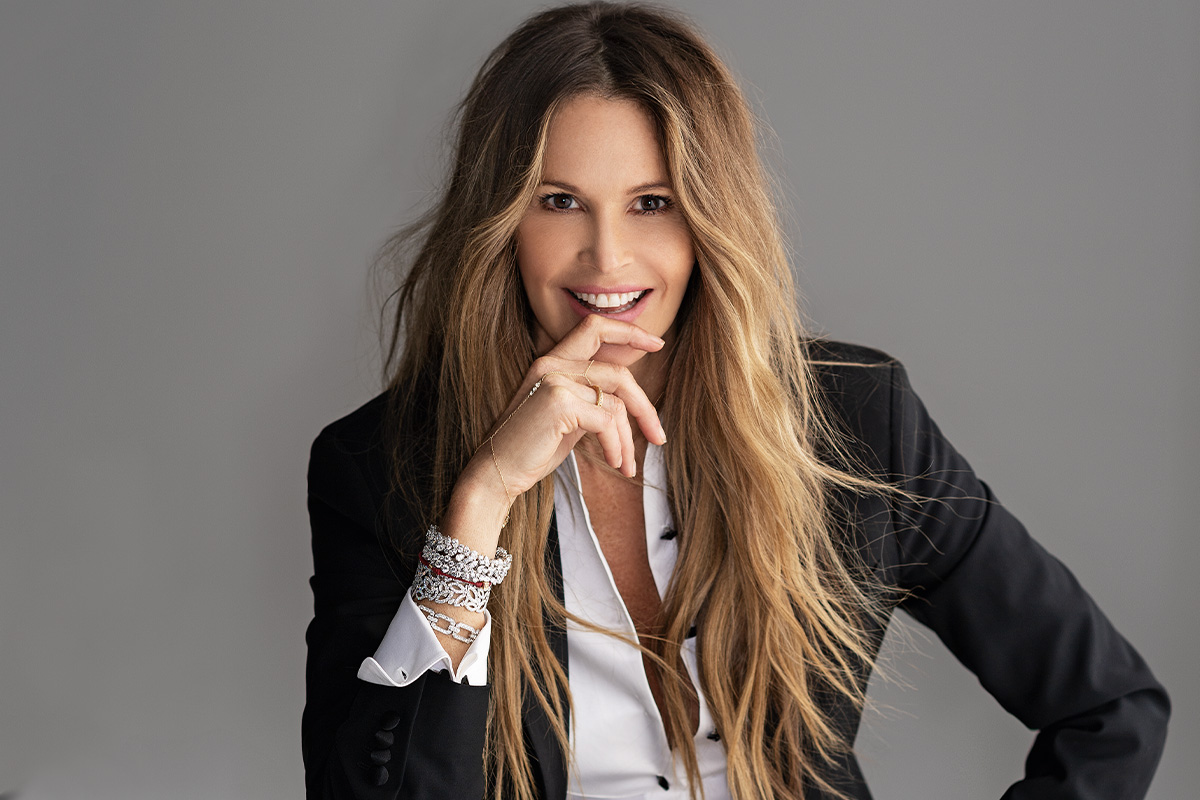 When the sun shines across Sydney’s North Shore, it’s easy to see how Elle Macpherson’s childhood home shaped her quintessentially Australian persona; a charm that ripples through her rich decades-long business empire.

Making a name for herself as ‘The Body’ at a time when print magazines were pop culture bibles, the Sony Walkman was life and women wore power suits with oversized shoulder pads while fighting to stand out in a man’s world, the supermodel needs no introduction. So influential is she that only one name is required.

Fast-forward four decades and the model-turned-business founder is as powerful as ever. She now lives in the US and leads one of the world’s most successful ecommerce wellness companies, WelleCo. But her continued career success is no accident. Following her self-made father’s footsteps, Elle identified lucrative licensing opportunities very early in her career. She first dipped her toes into the business world when she trademarked her name in 1994 founding Elle Macpherson Inc, which she used as a venture into other enterprises. It saw her become an “accidental” entrepreneur.

“I’m pro everyday equality, everyday celebration and everyday respect. I feel fortunate that we are not back in the days when men were seen as more powerful.” – Elle

“I’ve always had an interest in business, and I was motivated in the beginning to be financially independent and free,” Elle tells The CEO Magazine in an exclusive interview. “First, modelling was a job, a way to earn some income to finance an education. Then I built a career and a brand from modelling, after which I applied that brand to create a business. I started licensing my name and image to enrich the brand in 1989 and it became my business model – excuse the pun.

“Today I’ve evolved, and I no longer license my name, preferring to create my own business like WelleCo. I’m a shareholder and sit on the board, and WelleCo is a business created as a result of my own personal experience in wellness.”

As a successful entrepreneur, we ask Elle where she stands on the World Economic Forum’s statement that it will take 257 years before women are paid the same as men.

“I don’t think there’s just one answer to closing the gap,” Elle concedes, adding that she believes no-one should be judged on their gender or sexuality. “For me, everyone can take small steps. For example, I have stopped assuming that a judge will be a man or a nurse will be a woman.

“When we stop having the preconceived idea that gender is attached to a certain job – and that change needs to happen within individuals – we’ll see it reflected in the workforce with people being equally remunerated.”

Uplifting women, as well as educating men, is a notion that should extend further than the single 24-hour annual spotlight of International Women’s Day, she says.

“I’m pro everyday equality, everyday celebration and everyday respect. I feel fortunate that we are not back in the days when men were seen as more powerful. Strength is no longer considered as physical strength; women often command superior strength, power and skills in the non-physical qualities that now influence the worlds’ businesses and economies, and mould vital decision-making globally.”

Having spent her fruitful career walking the runways for Louis Vuitton, Christian Dior, Ralph Lauren, Valentino, Michael Kors and Kenzo, the monopoly of women has been a rare benefit to advancing up the career ladder.

“The irony is I come from an industry run by women for women, so my working experience is an exception to the rule,” Elle explains. “The modelling business actually has a prejudice towards women, so women can earn up to three times more than men.

“But historically, I recognise it has been difficult for women in business, mainly because of societal perceptions of what a woman can and can’t do, and is allowed to do. This is a major factor in the ongoing lack of equality in the workplace.”

She’s spent most of her life earning more than her male counterparts and the best part of 20 years at the helm of businesses. So you might assume the WelleCo Co-Founder’s central focus is on being a leading businesswoman. However, Elle says, it’s being a mother to her two sons (who, despite being 17 and 22, still want Christmas stockings hung at their beds) that brings her the most satisfaction. 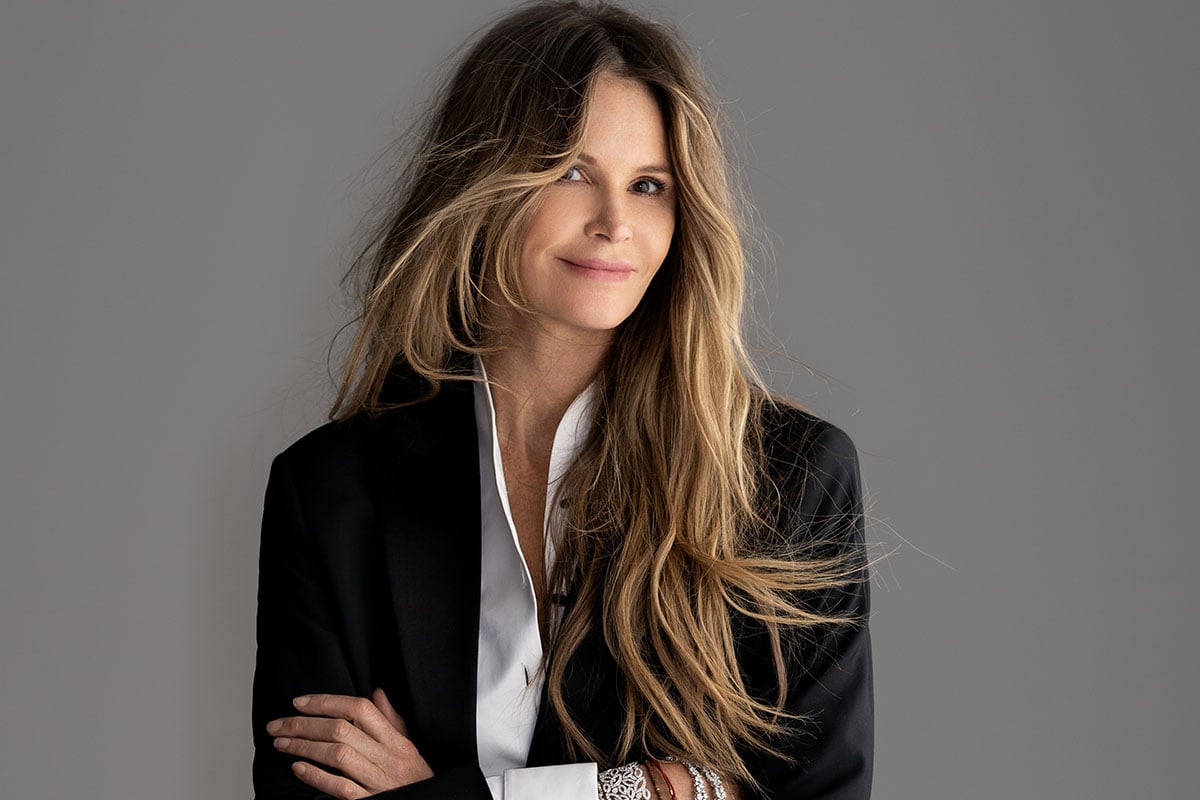 I’m pro everyday equality, everyday celebration and everyday respect. I feel fortunate that we are not back in the days when men were seen as more powerful - Elle. Image: Gilles Bensimon 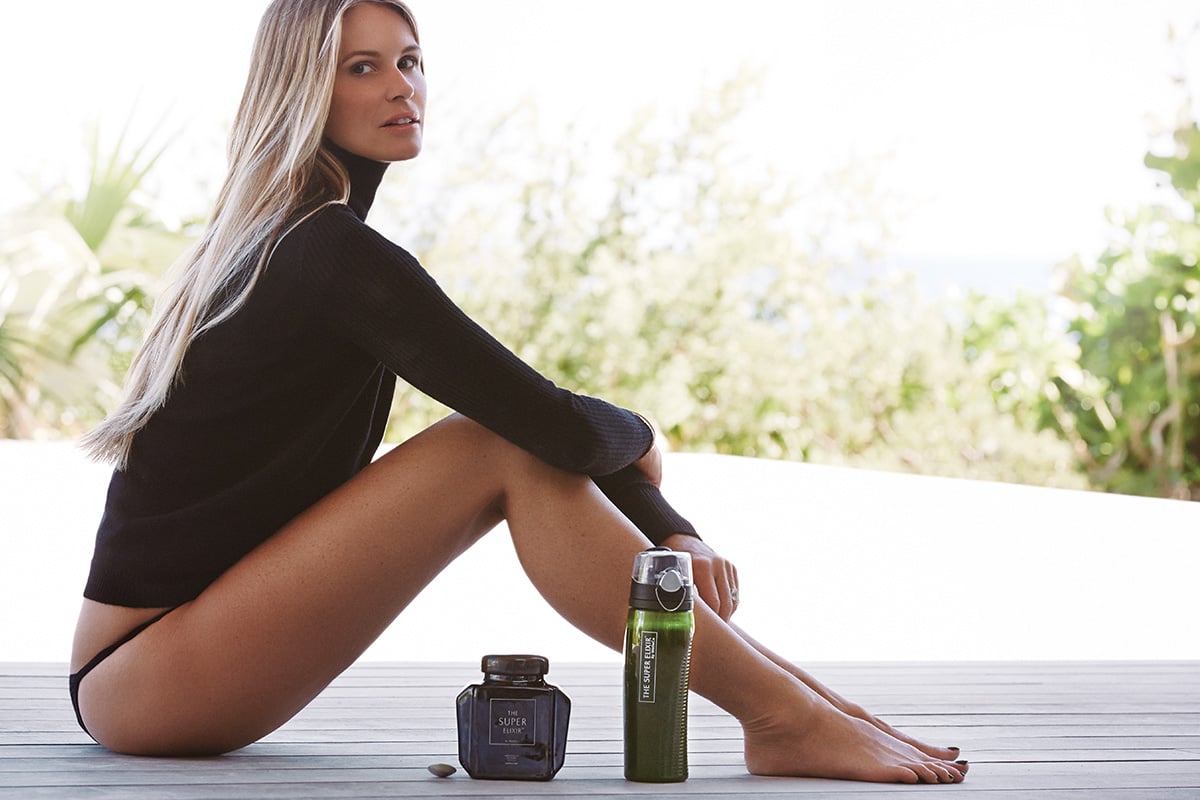 Elle Co-Founded WelleCo in 2014 making the company a pioneer in the wellness industry. Image: WelleCo 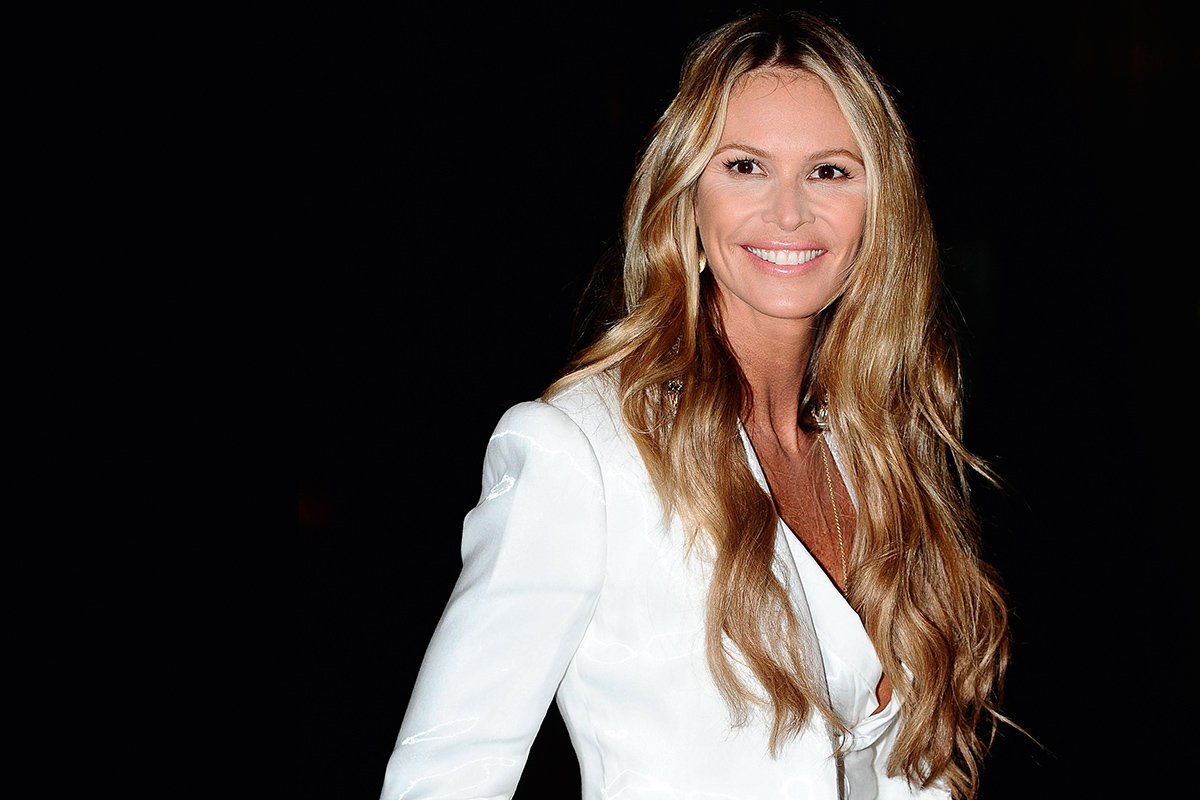 After four decades the model-turned-business founder is as powerful as ever. Image: Getty
[/img]

“The boys have a mother who has worked, and continues to work, well into her 50s, closer to 60 now,” Elle says. “I can see from them, their experience of women in the workforce is quite different to mine growing up, when women tended to be focused mainly on family (although my mother worked and still works today).

“As women, we educate each other by sharing our experiences. That’s the wonderful thing about social media these days, we do get to communicate, and share and grow.”

WelleCo was founded in 2014 after the supermodel approached Dr Simone Laubscher for a custom-mixed super greens formula to enhance her immune system. She quickly identified a business opportunity in selling these wellness supplements.

The move made the entrepreneur one of 12.3 million female business owners in the US, according to the National Association of Women Business Owners. It’s a figure made more impressive when you realise there was just 402,000 women-owned US companies in 1972.

“I believe in taking risks, and when you take those first steps, you can never truly know the amazing things that can happen once you trust and are committed.” – Elle

WelleCo celebrates its sixth birthday this month, providing an opportunity to reflect on its success thus far. The brand has evolved rapidly with new products launched as well as the parting of Co-Founder Andrea Horwood. The business pioneered the way to redefining beauty and fitness. Today, wellness is a multibillion-dollar industry from which Elle has built her extraordinary wealth from.

Forging a wellness community has helped the entrepreneur encourage people to embody their health. Although it didn’t come without risks.

The supermodel believes that through leaping into the unknown and taking bold opportunities (her first being at 17 when she put tertiary studies on hold to fly to the US for a crack at modelling) to follow her passions was the internal beacon that led her to international success. “I believe in taking risks, and when you take those first steps, you can never truly know the amazing things that can happen once you trust and are committed,” Elle reflects.

WelleCo is a glorious elixir of the corporate world, offering the supermodel a role she loves while turning a profit and positively impacting people’s lives.

But transitioning from the seemingly relentless modelling industry to navigating the perils of the business world hasn’t come without its hurdles.

“Seeing business as a journey has been a big lesson for me with all its twists and turns, delights and disappointments, successes and compromises,” Elle tells The CEO Magazine . “Seeing each experience as a point on the journey as it’s unfolding gives context.

“Teamwork is essential. The aim is to be working in effective ways so that you can funnel complementary strengths and enable people (and yourself) to shine and grow so the business can shine and grow.

“Everyone has their strengths and weaknesses – I believe successful business partnerships rely on recognising and respecting and enabling each other’s strengths for the good of the business.”

WelleCo was launched with a single trademark item and the company has expanded worldwide with a bounty of products being sold through its successful ecommerce store and a number of bricks-and-mortar shops.

The health and wellness industry is worth US$4.2 trillion globally, according to the Global Wellness Institute. The colossal figure is predicted to soar by a compound annual growth rate of about 6% by 2023. WelleCo was one of the first luxury wellness brands on the market – a tremendous risk at the time. 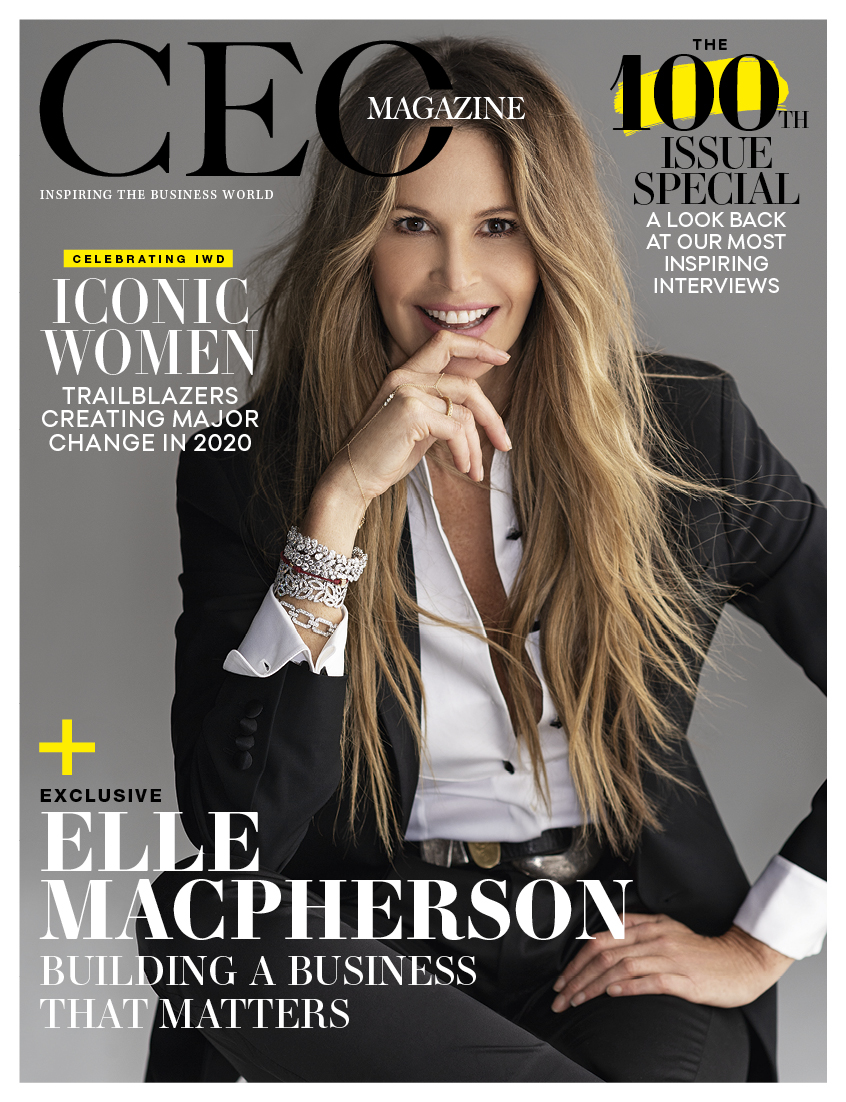 Elle graces the cover of The CEO Magazine's 100th edition.

“We are authentic, we had a vision early on and we stuck to it at a time when wellness wasn’t that fashionable,” she explains. “The most important tool for me in business has been simply the willingness to learn, adapt and evolve.

Sitting at home in the US, Elle has recently been chatting to her youngest son, Cy, about his exams. At 17, he’s puzzled at what he wants to do with his life. Elle wasn’t much older when she left Australia’s shores for a land of opportunity in the Big Apple.

“You can never truly imagine all the wonderful things in life that will come from taking those first steps.”

Don’t miss out on our special 100th edition of The CEO Magazine with cover star Elle Macpherson.