Marriott International Area Vice President and Intrepid Group’s CEO have been named Hospitality Executives of the Year at The CEO Magazine’s 2018 Executive of the Year Awards. 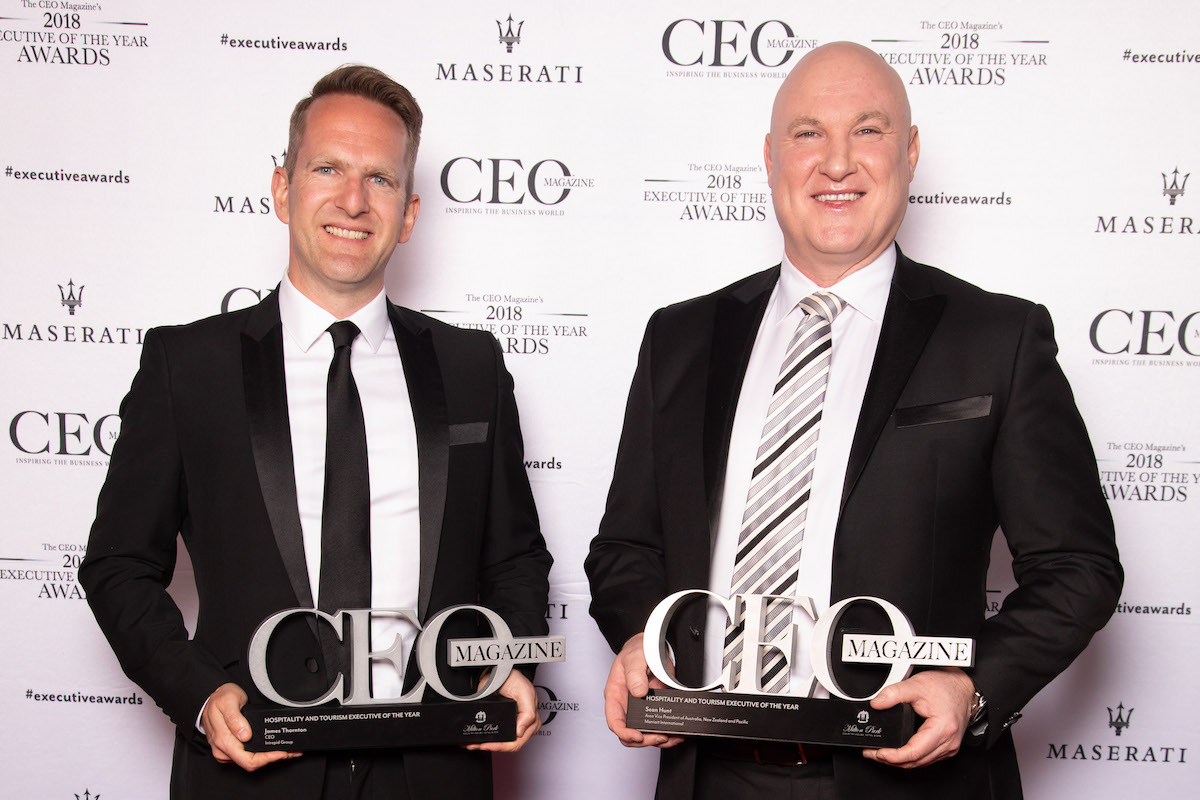 One of the two joint winners of the Hospitality Executive of the Year award, Sean Hunt, Area Vice President of Australia, New Zealand and Pacific at Marriott International, has been praised for cementing ownership of two-thirds of the luxury hospitality pipeline in Australia.

The 2018 Executive of the Year Awards recognised Hunt for successfully opening eight new hotels while signing on another six, driving guest occupancy rates to more than 80% across many of the venues and growing the billion-dollar empire’s portfolio to 30, with 21 additional hotels in the pipeline.

Steadily on track to increasing the total collection of hotels to 50 by 2020, Marriott International created 2,500 new jobs in the last 18 months and flourished with 110 million loyalty-program members globally.

Meanwhile, CEO James Thornton, grew Intrepid Group’s annual revenue by 14.81% to A$341 million and dispersed almost A$1 million through its not-for-profit, The Intrepid Foundation. With Thornton in the driving seat, the multi-million-dollar company acquired a 50% stake in Chimu Adventures – making Intrepid Group a seven-continent operator with offerings into the polar regions.

Having increased external sales by 20% in 2017, the adventure travel business opened new companies in three countries with a growing demand for sustainable travel – Japan, Iceland and Central America. Intrepid Group is the largest certified B Corp in Australia and the largest travel B Corp in the world, meaning it meets the highest global standards of social and environmental performance, accountability and transparency.

“Hopefully I can inspire a future generation of leaders in a comparable way, and the Executive of the Year Awards is an excellent avenue for this,” Hunt told The CEO Magazine . “The best way to learn and grow as individuals and as a team is by sharing our experiences and celebrating our wins.”

“The best way to learn and grow as individuals and as a team is by sharing our experiences and celebrating our wins.” – Sean Hunt

With more than 5,000 employees and annual revenue surpassing A$1 billion, Hunt has been focusing on creating a strong team since the Starwood Hotels and Resorts and Marriott International merger in 2016. “The merger has given me the chance to focus on my greatest passion, nurturing people to work their way up through the business,” he says. “I’m passionate about cultivating talent through mentoring and creating development pathways, and I also actively encourage other senior staff to help prepare associates for Marriott’s career development pipeline.

“I’m constantly encouraging the best and brightest coming through our hotel ranks to identify a mentor who will share their experiences and learnings.”

Hunt and Thornton were among more than 600 guests and nominees at the black-tie event in Sydney, hosted by The Morning Show hosts Kylie Gillies and Larry Emdur, attending Australia’s most prestigious business awards recognising individual excellence of senior executives.

Thornton leads 5,000 employees the Intrepid Group boasts more than A$300 million in annual revenue, putting it in its strongest financial position ever.

“This enables the group to invest further in the sustainable growth of brands and region, delivering on our strategy of Growing with Purpose,” Thornton told The CEO Magazine . “One of the challenges we face as we grow in scale is to ensure we attract, retain and develop the best talent.

“One of the challenges we face as we grow in scale is to ensure we attract, retain and develop the best talent,” – James Thornton

After returning to independent ownership in 2015, the company has made a long-term commitment to delivering benefits to all stakeholders. In the past three years, the business has been able to double brand investment.

“Independence meant we no longer had to focus on delivering short-term profits,” Thornton says. “Our Urban Adventures brand demonstrated the value of investing in long-term growth, increasing passenger numbers by 62% in 2017.

“As a result, we’re doubling our investment in the brand, aiming for one million travellers by 2020.”

Thornton was also in the running for CEO of the Year as a finalist. The winner was Mark Nielsen, APAC CEO and Executive Director of Talent International.

The CEO Magazine’s 2018 Executive of the Year Awards were held on 21 November at ICC Sydney. To see the full list of winners, click here.