Here’s how Scrub Daddy founder and CEO Aaron Krause turned a simple idea into a multimillion-dollar company. And it all started with a smiley-faced sponge. 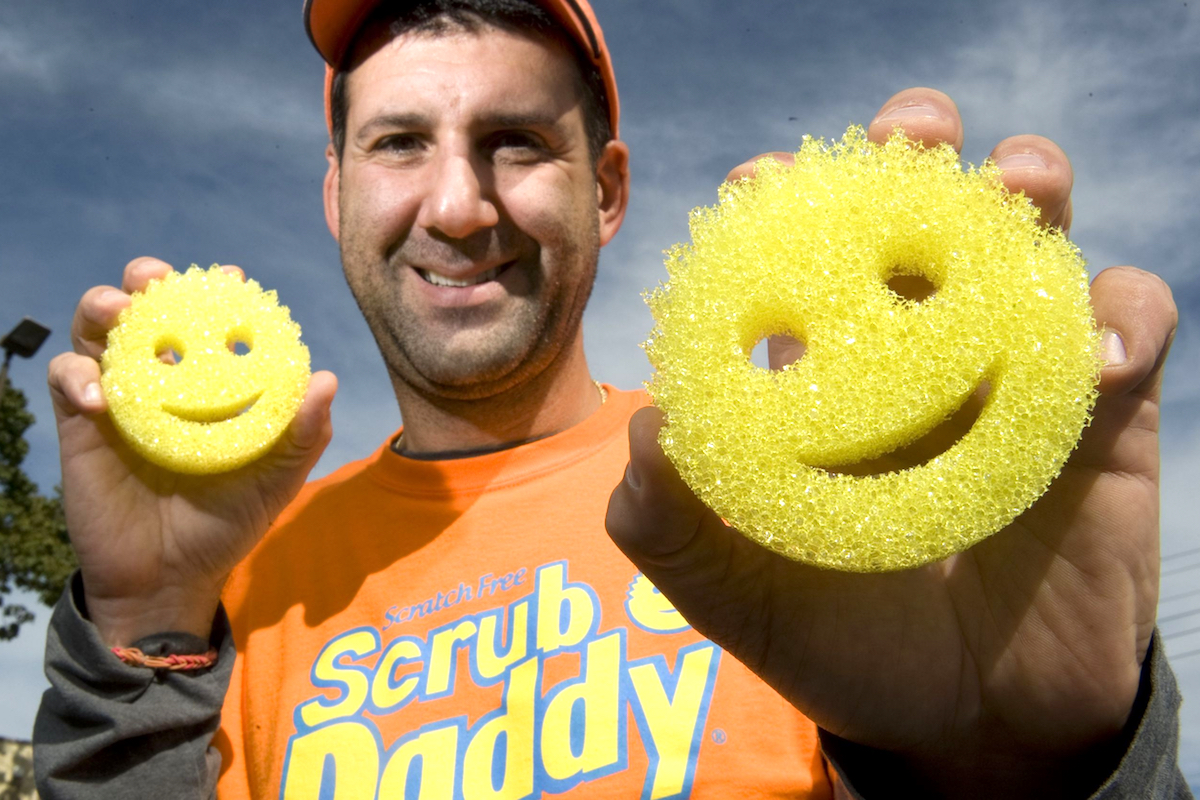 Aaron Krause has been an inventor for as long as he can remember.

“I’ve always had an affinity for seeing problems with products,” he admits. “But, if you told me 25 years ago that my greatest invention would be a kitchen sponge, I wouldn’t have believed you.”

Today holding the title of Shark Tank US’s greatest monetary success, Aaron has sold more than 25 million of his revolutionary smiley-faced cleaning sponge Scrub Daddy, and the company is worth upwards of US$170 million.

“Despite what you might think, this product was no overnight success story. In fact, it goes all the way back 25-30 years ago after my college graduation. My parents, both doctors, sat me down to discuss my future,” he recalls.

“To their dismay, I announced that I was going to start my own car washing business. To me, I wasn’t simply a car washer – I was the president and CEO of a company.”

Aaron started using a new material, urethane foam, to polish cars. Unsatisfied with the existing buffing pads on the market, he decided to apply for his first patent.

“I’ve been inventing since I was a kid, but this was the first time I’d acted on it. From the moment I tried my new buffing pad, I knew that it was something extraordinary.” 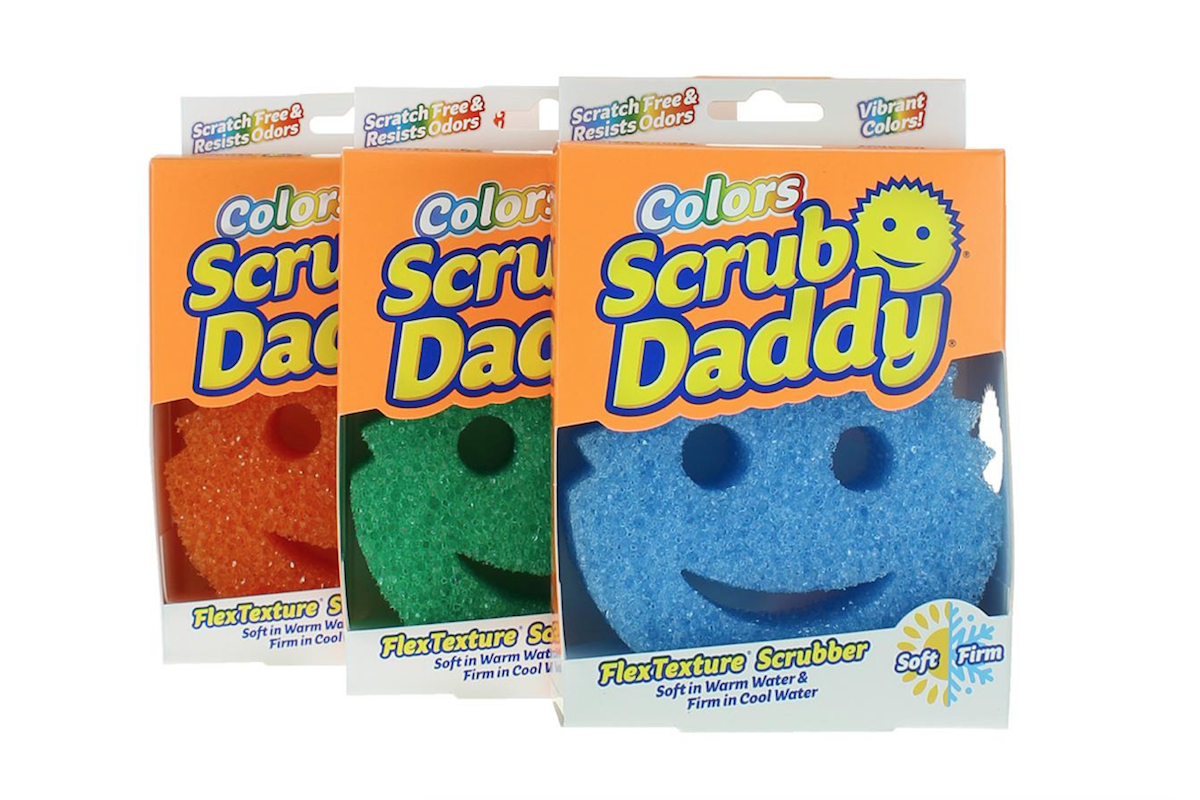 Later, Aaron sold his car washing business to focus on producing the buffing pads. “I also developed the machinery needed to manufacture the pads, so my hands were always covered in a layer of oil and grease I couldn’t get rid of – no matter what I used.

“Naturally, I decided to invent a product to clean them. I requested samples from every foam supplier and finally, a German company tailor-made a foam for me. It was a miracle,” he recalls.

“To get a better grip on it, I cut it into a ridged circle with two holes in the middle to clean my fingers. Before you know it, a smiley-faced sponge was staring up at me. That was the true beginning of Scrub Daddy.”

Fast-forward to 2008 and Aaron sold his buffing pad business to the world’s largest manufacturing company, 3M, with one exception. “They had no interest in my original patented products, so they removed Scrub Daddy from the deal and bought the rest,” he says.

“I was having no luck selling my sponges, so I put them in a box labelled ‘scrap’ and left them at the back of the factory. It wasn’t until 2011 when my wife was nagging me to clean the lawn furniture that I remembered the box. 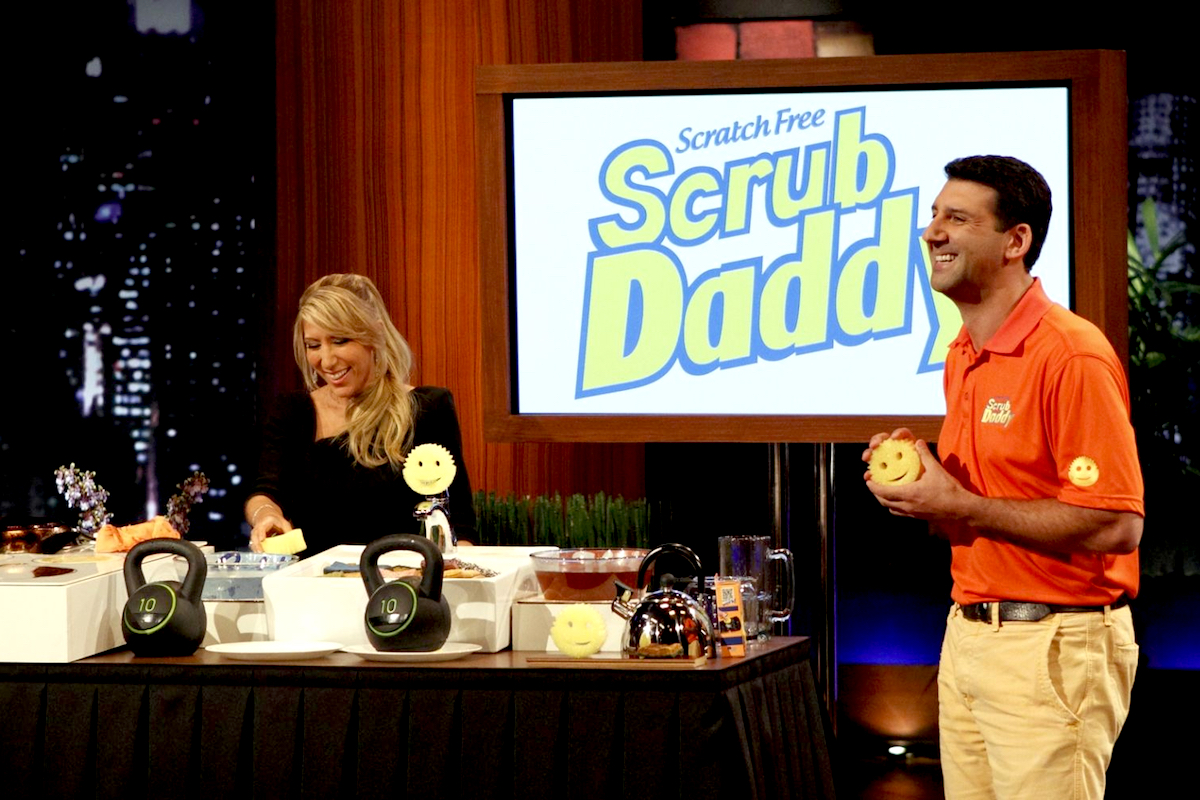 “It’s amazing how many times Scrub Daddy almost didn’t happen,” Aaron laughs. “For three years, I had millions of dollars in sales sitting in an old box. I dipped the sponge into a bucket of hot water and suddenly it became completely soft.”

Unknowingly, Aaron had developed a dual-texture, scratch-free sponge that became softened in warm water and hardened in cold water. “It worked so well on the lawn furniture that I decided to test it out on the dishes,” he remembers. “The rest is history.”

Aaron secured a patent and put US$75,000 into producing an initial batch with all-new packaging. By April 2012, he had secured a weekend front-page business feature in the Philadelphia Inquirer and two successful appearances on QVC’s shopping channel, where Scrub Daddy sold out within eight minutes.

“One night, my wife and I were watching Shark Tank, when I realised that I’d be crazy not to go on the show,” he says. “I filled out an application form and after two months of intense preparation, I was on set in Los Angeles filming for the fourth season.

“I’ll always remember the moment I turned town Shark Tank’s toughest judge, Kevin O’Leary,” Aaron remembers. “He made me an offer for 50 per cent of the company and I looked him in the eye and said, ‘Okay, you’re out’. It was priceless.”

Aaron accepted an offer from Shark Tank business mogul Lori Greiner, who put down US$200,000 for 20 per cent equity in Scrub Daddy. “When the episode aired in October 2012, the business exploded and it hasn’t slowed down since.”

Today, Scrub Daddy is nipping at the heels of its competitors as the third-largest sponge company in the US. “Every day, we’re taking market share from 3M. I know they’re kicking themselves for taking Scrub Daddy out of the deal all those years ago,” Aaron laughs.

Scrub Daddy is now available in more than 60 online and instore retailers across the US. “It’s a small idea, but it’s consumable. It has mass-market appeal that crosses every demographic and at US$4, it’s extremely affordable,” Aaron explains.

Scrub Daddy has expanded its range to include scouring pads and erasers, mops, dish wands, microfibre towels and soap dispensers.

In January this year, Aaron ventured to Australia to launch Scrub Daddy. It will soon be available in Coles and Woolworths supermarkets across the country.

Aaron’s advice to budding entrepreneurs and inventors: “If you have a great idea that you truly believe in – no matter how big or small – the only way it will ever become successful is if you take a chance and act on it.”

For more entrepreneurial inspiration, The CEO Magazine sat down with CapGenius Founder Jordan Verroi to discuss what it takes to abandon your day job and chase your dream.