The meteoric rise of co-working spaces, where innovation is flourishing and competitors often sit side-by-side, is changing long-held business beliefs about how to get ahead. Is collaboration the new competitive advantage? We all know the story. Lone geniuses, with maybe one or two good friends, locking themselves away in a garage for months or years at a time with only grit and pizza to keep them going.

When they emerge, they have created a world-changing product or service, and billions of dollars soon follow. Microsoft, Apple, Google, Amazon – the humble garage and its isolating four walls play a large part in all their creation tales.

But, today’s entrepreneurs, solopreneurs, freelancers, and all those looking to start a business of their own are not content to lock themselves away in a dark room until they are ready to share their ideas and products. They are increasingly joining one of the nearly 15,000 co-working spaces around the globe, trying to tap into the magic that cultivated the likes of Uber, Instagram and Spotify.

It’s clear that flexibility, lack of overhead costs, and free yoga sessions have an appeal for new businesses – but co-working spaces offer much more. What is it about this new type of environment that helps businesses succeed?

Research published in the Harvard Business Review in 2015 showed that people who work in co-working spaces report levels of thriving that approach six on a seven-point scale – at least a point higher than for employees who do their jobs in traditional offices.

“I think there’s a huge shift in the business world because of co-working, even from a corporate perspective, because it’s about access and resources,” explains Tashi Dorjee, CEO and Co-Founder of TwoSpace, a Sydney start-up that turns restaurants closed during the day into unique co-working spaces for freelancers and entrepreneurs. 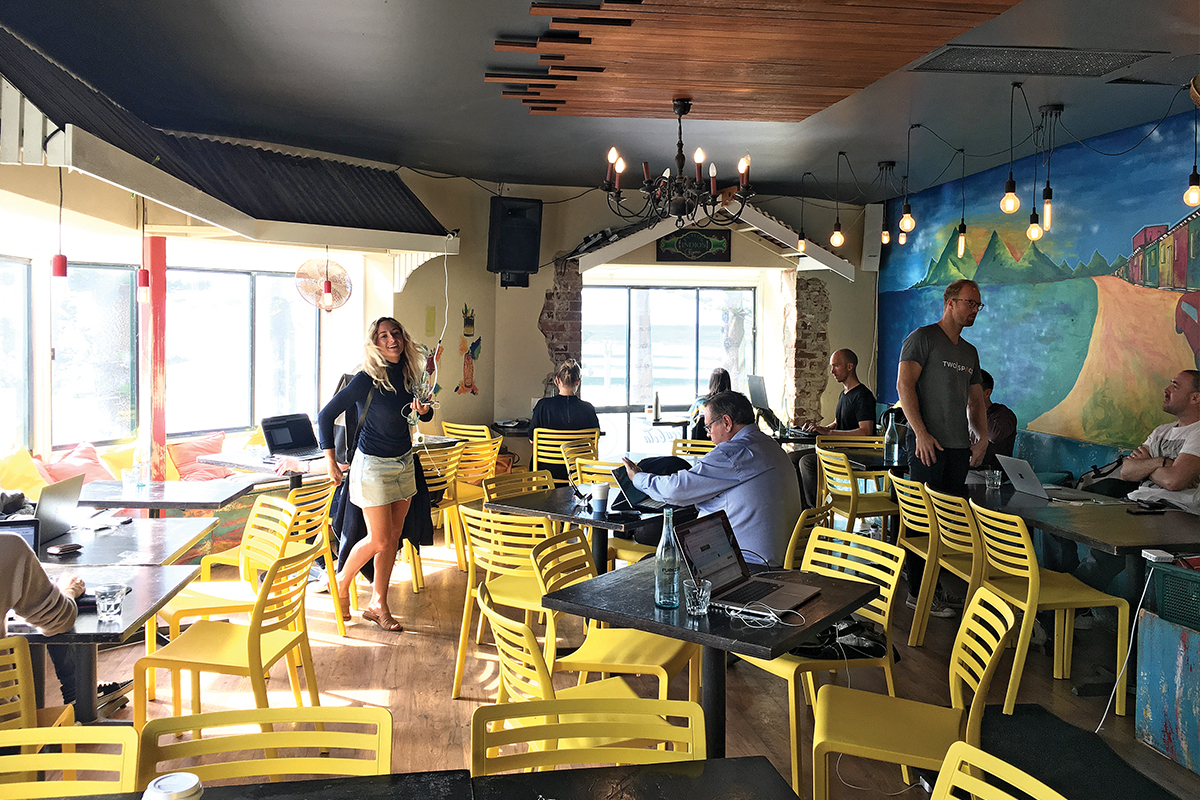 “When you become a member of TwoSpace, or any co-working space for that matter, you often have access to things like free web service credits, legal advice and accounting consulting. We provide mentors, networking events and educational workshops. Each space does its own thing, but it’s a big misconception that co-working spaces are just desks for hire.”

Dorjee is quick to point out that this goes both ways – connections established at the early stages of a business are beneficial to the start-up, as well as any service providers. “For example, the business software we use, MYOB, gets access to a whole community of new businesses that are potentially going to explode in the next five to 10 years. If a business becomes the next Google or Apple, then MYOB already has a relationship with that start-up and can grow its business with that company.”

“Human beings are pack animals,” explains Shawn Kent Hayashi, Executive Coach, founder and CEO of The Professional Development Group, “We want to feel like we’re a part of a tribe, a community, a group.”

Unlike in regular offices where lack of, or too much, interaction with colleagues is considered inappropriate depending on the work environment, members of co-working spaces can choose when and how to interact with others. “The similarity between all co-working spaces is that community and partnerships are vital,” notes Dorjee. “Co-working is healthy, not only mentally, but also to stress test your ideas within a community of people you trust. Working in environments where there are other people founding start-ups alongside you, you feel like you’re a part of something bigger.”

“It is very clear that innovation and wealth come from collaboration,” says Hayashi, who literally wrote the book on the subject – Conversations that Get Results and Inspire Collaboration. “I think businesses are learning that they can’t know about every new trend, or have the skills, talent and ability to take on every new opportunity.”

While many co-working spaces accept members from any industry or sector, some focus on one specific area. Having opened earlier this year, Core Collective is a first-of-its-kind co-working space for the fitness and wellness industry in Singapore. Edspace in London houses 100 education pioneers, and San Francisco is home to La Cocina, a space that cultivates food entrepreneurs.

In the past, working alongside a potential competitor would have felt counterintuitive – the fear of stolen ideas and pilfered clients too great. But, on the whole, co-working spaces seem to cultivate relationships where businesses see value in working together to gain new clients, or are happy to refer them on if they don’t perform a particular service or are not the right fit.

“I’ve seen this with service businesses recently, where they recognise that it benefits them immensely to collaborate with people who are providing other services to the same target market,” confirms Hayashi. “Rather than feeling like they’re competing for the same customer spend, they’re instead saying ‘Let’s show our customers how well we will work together to solve complex problems for them’.”

It is estimated that the number of co-working members will rise to 5.1 million by 2022, and Dorjee agrees that co-working isn’t simply a passing fad. “When people sign up to co-working spaces it’s because they want to know that the person sitting next to them could be someone they can work with, or bounce ideas off. Business is all about the people you surround yourself with – it’s that simple.”