Conferences: the good, the bad & the ugly

A conference can either inspire you or have you heading for the exits. New formats for conferences are improving the experiences for all. 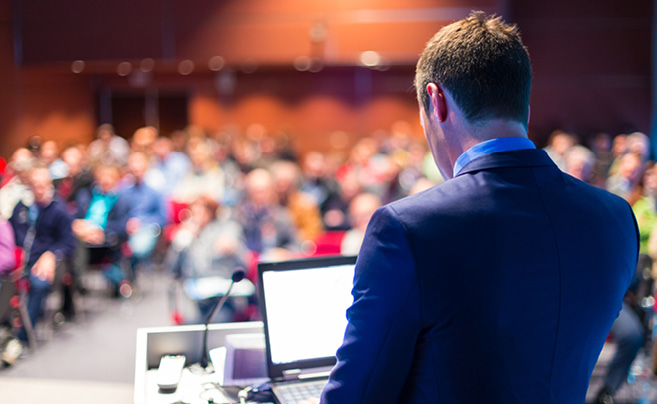 Conferences. We’ve all been to them. The stewed coffee and mountains of sugary snacks that just have to be consumed. The nametags adorned with different designations (hey, I have the blue ribbon of a speaker on mine so I must be important), the business cards to collect and the awkward waiting to meet a great speaker. My favorite is the conversation with that new connection who, while making conversation is gazing over your left shoulder to see if there’s someone more important they need to meet. We have experienced it all, right?

So why do we do put ourselves through it? For most of us it is to meet others in the industry, sell our wares, learn and connect. But do we have to do that within the four concrete walls of a convention centre or hotel ballroom? Do we have to endure speaker after speaker reading off his or her own Powerpoint slides for hours at a time? Thankfully no. Recently, I have had three much more evolved conference experiences that give me hope that I will happily sign up for conferences in the future and you should too.

I attended a Mindful Leadership conference last year. As the theme suggests, you expect something a little more than the standard plenary and breakout sessions etc. This one was a stand out because they dedicated a large chunk of a day for attendees to fully participate in applying a theory of mindfulness to our actual lives. Breaking into small groups, the textbook ideas became real world very quickly but amazingly not in a ‘woo-woo’ way. An individual exercise akin to measuring Myers-Briggs capabilities concluded with us all stepping onto a tile representing our one dominant trait. The entire room was spread out over the 12 possibilities and a long discussion ensued along with much dwelling on the ideas after the event.

More recently, I attended an event tackling purpose for people, companies and non-profits hosted by WildWon. Every element of this event was intentional in its design. The event space had plenty of air and natural light (revolutionary!). The name cards were hand made of wood and there were a set of different colours and symbols on each of them to serve as conversation starters. It sure beats the plastic holder with the printed nametag, and aforementioned ribbon letting the world know that you are important. A coffee cart was positioned right out the front with actual coffee using actual coffee beans made by a barista who clearly had her espresso machine driver’s licence. Break out sessions were held in interesting restaurants and cafés a quick walk away. The walk served to let you decompress from one session and get you all set for the next.  And it got you moving into your body and out of your mind meaning you actually didn’t need five coffees to get through the day.

The ultimate in a “moving” conference, in all senses of the word was one that started on the wharf at Sydney’s Opera House. The group was taken by water taxi to a secluded harbour beach where session one commenced. The theme here was also around mind training. A concept was introduced, an exercise explained and then we would walk along the shoreline to our next destination doing said exercise. We ultimately finished up at Nielsen Park where we spent much more time in another well-lit, air-filled pavilion diving into many more concepts and practices. We then had lunch and a swim. Yes, a swim was on the agenda of this gathering and I still think about that today! The concept of moving, swimming, and observing to get in to your body and out of your mind in order to promote a different way of thinking was the message — and so the swim was a clever design element.

The last conference I attended was probably the most radical. Based in the US, Renaissance Weekends have been running since 1983. Rather than the classic ‘sage on a stage’ approach, where the expert is put up on stage and we all listen intently, the organisers invite attendees based on what they have to offer and the attendees then form the program. This eliminates the ‘us and them’ energy that many conferences create. As the event name suggests, topics ranged from science, politics, space exploration, economics, national security, the arts and entrepreneurialism. What was most unique was that kids were also invited and they had their own program. A few weeks out from the event, we were each given our assignments with 2–3 panels we were to participate on. My wife (and Co-Founder of our company) was on a panel on women in business for example, while I had one on socially responsible business. My 11-year-old son presented a discussion on what new holiday he would introduce to the world and my 13-year-old appeared on one panel discussing the impact of social media on the world and another on the one experience that changed his relatively short life to date. I think the adults got more out of listening to the kids than listening to the other adults! Astronauts, TV and Movie Producers, Senators and Presidents of the largest US Universities all gathered and because it was held over three days, there were multiple opportunities just to sit and have breakfast with this person or that. There was no mad rush to make a particular connection. Lo and behold, connections were made, rather than transactions.

All this drives to a much more embodied experience that leads to a more impactful time together. It is these kinds of conferences that stick in our minds, and indeed our hearts, and that is what creates the most lasting impact from a conference.