The Estée Lauder Companies executive reveals how to thrive in business

After 24 years at the beauty empire, Emmerentia Wilding knows what it takes to achieve success. When you start an exciting role at a vibrant new company, you might expect to stay for a year or two before moving on. That’s exactly what Emmerentia Wilding envisaged when she started at The Estée Lauder Companies – 24 years ago.

A long way from her early days spent as a Marketing Manager in South Africa in the ’90s, the General Manager for Oceania exudes a palpable aura of contentment when she reflects on her impressive journey.

“It’s a lifetime,” Emmerentia laughs. “Sometimes Mr Right Now rather than Mr Right is how you’re thinking when you start a job, then sometimes what you thought was Mr Right Now turns out to be Mr Right and you stay forever.”

She was attracted to the beauty empire not so much for its iconic products, but instead for the culture Estée Lauder herself established in 1946.

“I was drawn more to The Estée Lauder Companies as a company founded by a woman and which employed women in a way I hadn’t seen before,” Emmerentia shares with The CEO Magazine. “I joined the company really young and my only roles prior to that were in very male-dominated industries, certainly very senior levels were super male-dominated.

“I stumbled across The Estée Lauder Companies and was inspired by everything I read about the company.” While Emmerentia asserts longevity is nothing but a usual practice that is encouraged, celebrated and revered at the company, it’s a testament to the visionaries keeping the dream alive.

More than 70 years after its inception, second- and third-generation family members continue propelling Estée’s vision into the future. The main advocate is her eldest son Leonard Lauder.

“I cannot sometimes imagine someone who is 87, who could happily be enjoying his retirement, and doesn’t for a second stop working because he loves it so much,” Emmerentia reveals. “He has this naughty twinkle in his eye, a delightful sense of humour but more than anything, he makes you feel like you’re part of his family.

“He meets so many people. I am just one of thousands of people he would have met along the way and yet, once he’s met you, he remembers you.”

The warm family spirit trickling from the top down is what inspires Emmerentia to breathe passion into every position she’s held at the business.

On 1 February, 2020, a world of opportunity was at the executive’s fingertips. Having just returned home to Australia from the UK to start her new role as General Manager of Oceania, at first glance it appeared to be a glossy chapter in the book of her extraordinary career.

Simultaneously, there had been whispers around the world of a health crisis. But many underestimated the true impact the COVID-19 pandemic was yet to have.

“Embrace change because it has so many positive outcomes when you embrace it rather than resist it.” – Emmerentia Wilding

Usually spending the first month for orientation and meeting new faces, this time was slightly different.

“The first month passed in a snap – there was already this brewing discussion of COVID-19,” she explains. “We were realising that we were potentially facing something very big.

“One thing that will always stand out for me is I knew really quickly it was always about fast tracking these relationships I didn’t have time to build in a normal way. We needed to pull together.”

Although the beauty industry wasn’t disrupted as significantly as other sectors – especially in Australia – the turmoil is still being felt globally. 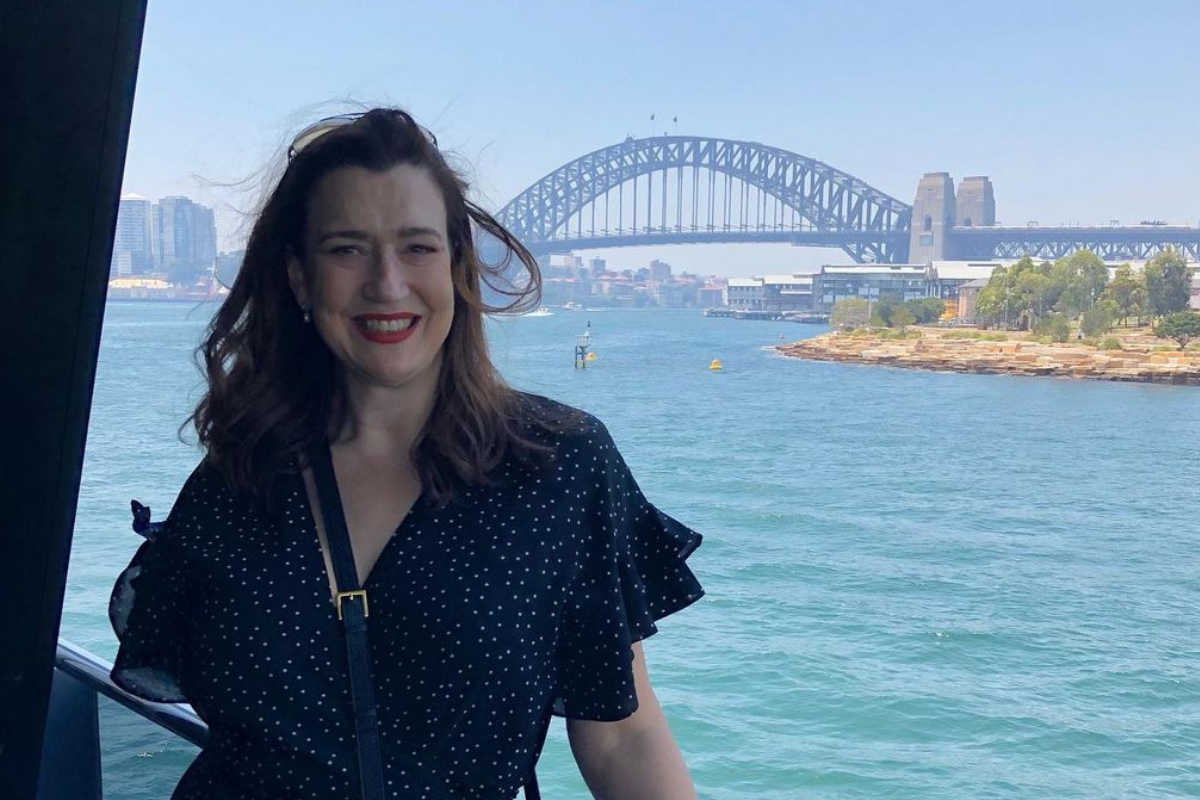 Logistics and retail stores were the hardest hit areas for the multibillion-dollar industry, although some areas of The Estée Lauder Companies remained prosperous.

Self-care and lifestyle products to make a home more comfortable all benefited from COVID-19. From Jo Malone London and Le Labo to Tom Ford and Clinique, the artisan and trusted brands have been popular choices during 2020.

“We’ve seen consumers turn to beauty, albeit in a different way, as part of that solution to make you feel better,” she says. “It’s been a tough journey.

“People are buying up, perhaps treating themselves with fragrances they may not have considered before because if that’s going to be one of your few joys and one of the ways you can spoil yourself, you then think about it a little differently.”

Unlike any business challenge faced in modern history, COVID-19 proved even tougher than the Global Financial Crisis and Brexit.

Describing the three events as her biggest tests, Emmerentia believes they are linked.

“While I’ve faced many business challenges over the years, it really is these macro ones that stand out,” she reflects. “Maybe they stand out because so much is out of my control and my big learning is to adjust to what I can control. How do I make those decisions, how do I garner as much information to feel like I am making evidence-based decisions within this big challenge?

“The one thing that is constant is change. Perhaps at a pace that has all of us a little bit out of our comfort zones at the moment, but that’s when longevity helps you.”

Making it through some of the biggest business threats of modern time, Emmerentia has a catalogue of tried-and-tested lessons for success.

“Embrace change because it has so many positive outcomes when you embrace it rather than resist it,” she explains. “Having a curious mind, trusting the company has your best interest at heart, and taking on those new challenges has really benefited me.”

While her career has been rich, the executive acknowledges it hasn’t always been an easy progression. In fact, it’s the diversity that has added colour to her years at the beauty empire.

“You always have to think of a career as a jungle gym because sometimes a sideway move is part of what gets you to the top in the end.” – Emmerentia Wilding

“Your journey is never smooth,” Emmerentia says. “And so, part of my success and career with the company has also been balanced with being patient – patience that sometimes I wish I could impart on some of our new generation because your career isn’t just a ladder.

“You always have to think of a career as a jungle gym because sometimes a sideway move is part of what gets you to the top in the end. Sometimes I get the sense in the new workforce generation they see it just as a ladder and you just keep climbing straight up – it doesn’t work like that in life.”

Although myriad opportunities come with a world of obstacles, overcoming them makes for a stronger leader.

“You have to learn to roll with the punches and be able to handle that: step up to it and not walk away,” she adds. “We’re all learning how to do this better all the time. We guide and help provide the necessary tools, but I couldn’t say that everyone has got this completely perfect yet.

Family is the heart of Estée Lauder

With decades of history behind it, the US$1.2 billion company has its sights firmly set on the future – and with that comes the topical mission of sustainability.

While heritage businesses can at times be guided by questionable procedures or formulas, the General Manager says sustainability is one of the fundamentals of the cosmetics conglomerate.

“We are first and foremost a family company founded by Mrs Estée Lauder herself,” she reveals. “It’s in our DNA that there’s a profound sense of responsibility for current and future generations as a family company.

“It has always had in its heart this goal of doing the right thing for the community, leaving a light footprint – that’s not really new to us. And sourcing the highest quality ingredients without damaging the environment.” Despite the tumultuous year, The Estée Lauder Companies achieved its 2020 climate goal – net zero carbon emissions and 100 per cent renewable electricity globally for its direct operations.

“Many good intentions were dropped along the way when COVID-19 hit but this was something our company felt strongly that we could not ignore,” Emmerentia explains. “It was our most significant year for solar installations.

“Our global company now has more than five-megawatt solar capacity, so we’re growing our renewable energy portfolio with these solar installations – our newest are at our factory in Melville, New York, and our Aveda campus in Minneapolis, US, and we’ve also recently purchased a wind farm in Oklahoma, US.

“These will continue as we expand our response to climate change.”

And the efforts were recognised by CDP, naming the company in the Climate A List as a leader on corporate climate action.

The green vision runs through the 48,000 employees spread across more than 50 nations globally, spanning right back to Emmerentia’s very first day on the payroll.

“Leonard has this naughty twinkle in his eye, a delightful sense of humour but more than anything, he makes you feel like you’re part of his family.” – Emmerentia Wilding

Given to her when she joined was a framed sign capturing the company’s values – a keepsake that has travelled around the world from desk to desk.

“Eliminating waste and reducing inefficiency – in order to provide maximum value to our customers – has been one of our company values from before I joined,” she shares. “That’s always been there.”

Just as many of the US-founded company’s beliefs flow through the rule-makers at the top to integral cogs below, it’s inspiring to see the heirs of the billion-dollar enterprise continue their mother’s honourable legacy.

“Leonard still goes into the office,” Emmerentia points out. “He would walk into the boardroom and literally, physically, roll up his sleeves and say ‘Right, let’s get to this,’ and get stuck right into the details.

“He’s got so much passion and it’s contagious.”

“It’s a magical feeling when someone like that waves at you across a room, walks over to you and remembers exactly who you are and which country you’re currently working in. He still sends handwritten notes to many employees,” she says.

“I had no idea it was going to change my life forever when I joined.”