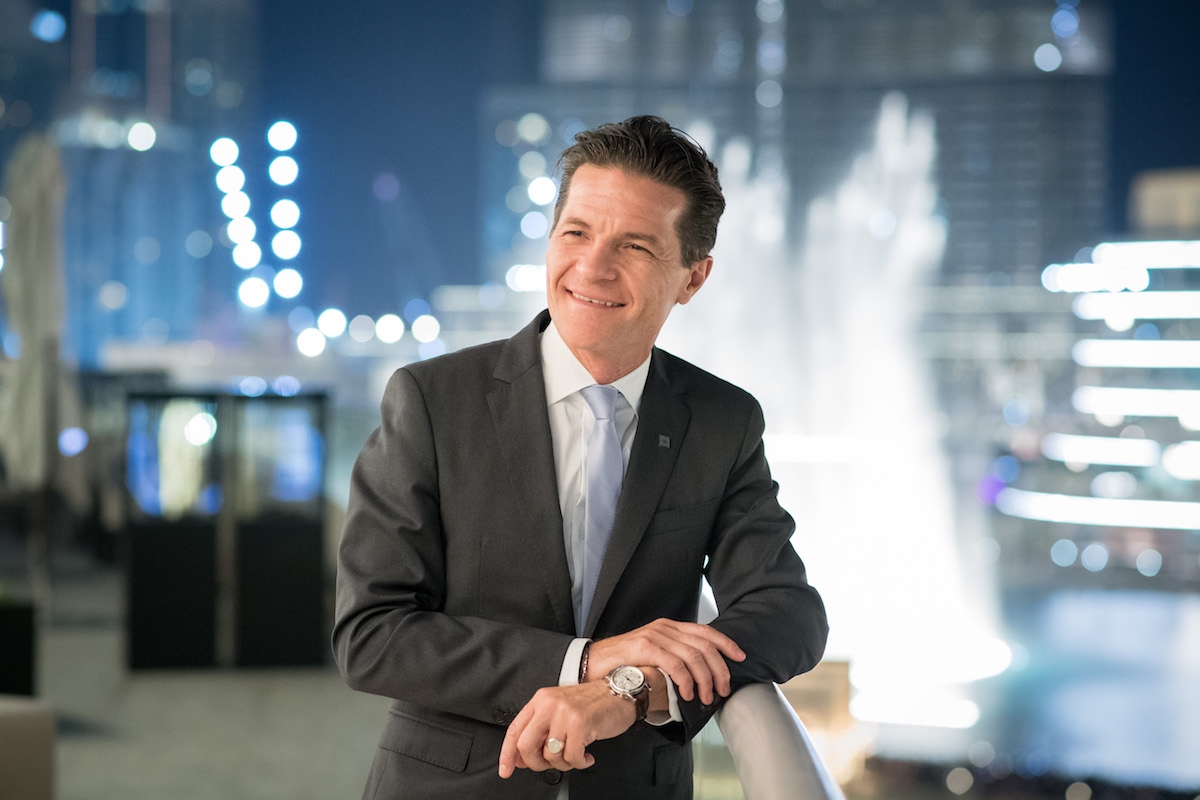 On the private terrace of the executive lounge at the 5-star Address Hotels + Resorts Downtown, Emaar Hospitality Group’s first hotel unveiled in 2008, we sit down with CEO Olivier Harnisch. Our eyeshot is that of The Dubai Fountain, the world’s largest musical fountain, set in the Burj Khalifa Lake between the world’s largest mall, The Dubai Mall, Souk Al Bahar, and the Burj Khalifa, the world’s tallest building. These colossal edifices are all part of Emaar’s 200-hectare flagship mega-development, Downtown Dubai.

Emaar Hospitality Group is a wholly owned subsidiary of Emaar Properties, founded in the late 90s by Emirati businessman, Chairman Mohamed Alabbar, the mastermind behind one of the largest real estate development companies in the world, with annual revenue of almost US$5 billion and a market cap of more than US$8 billion.

Olivier’s career started 32 years ago in 1986 as a waiter at Le Negresco Hotel, a 5-star palace with the finest view of the Promenade des Anglais, the heart of Côte d’Azur in Nice, where celebrities, actors, artists and crowned heads often met. He was consumed early on by attentive service and an understanding that it’s the small details that count – fundamentals that ground a unique sense of guest wellbeing.

Olivier knew he wanted to climb the corporate ladder to work in international management, and moulded his vision into a reality. He spent 14 years with Hilton across six continents, and then four years with Radisson Hotel Group at some of its most exclusive 1,400 properties before joining the Group’s headquarters in Brussels.

Thirsty for change, in 2016 Olivier joined the rapidly growing Dubai-based Emaar Hospitality Group with its bold vision of becoming big, both regionally and globally, and to position itself as an agile and influential leader. The mission of the Group is to be the leading global provider of personal, innovative and memorable lifestyle experiences in the United Arab Emirates.

“I love the project, that’s why I decided to join,” explains Olivier, elaborating on the exciting growth potential of the Group. “I enjoy the fact that Emaar Hospitality Group is big in Dubai, but still small internationally, and our mission is to expand into the Gulf countries, as well as Asia, Africa, and certain European countries.”

The Group currently operates 18 hotels and serviced residences but is set to more than double in property count with an astounding 39 announced future projects around the world. Among the up-and-comers are five projects in neighbouring Emirate Sharjah, and three in Ras Al Khaimah and Abu Dhabi.

“We have a very big Address Hotel coming up in the Holy City of Mecca in Saudi Arabia with 1,500 rooms; we have a hotel project in the Maldives, and several projects in Bahrain, Egypt and Turkey across all three brands. International expansion is one of the Group’s big focus areas.”

The second focus area is establishing Emaar Hospitality as the most innovative hospitality company in the Middle East. Its definition of innovation includes technology, but importantly, not at the expense of a human component.

“We want to be the best at marrying the power of technology with the warmth of human service,” says Olivier. “Technology is an amazing enabler to make the guest journey easier, to remove friction points, to eliminate waiting times, confusion, and so on. But it does not replace humans, and this is the beauty of the hotel industry. The human is still at the centre point.” 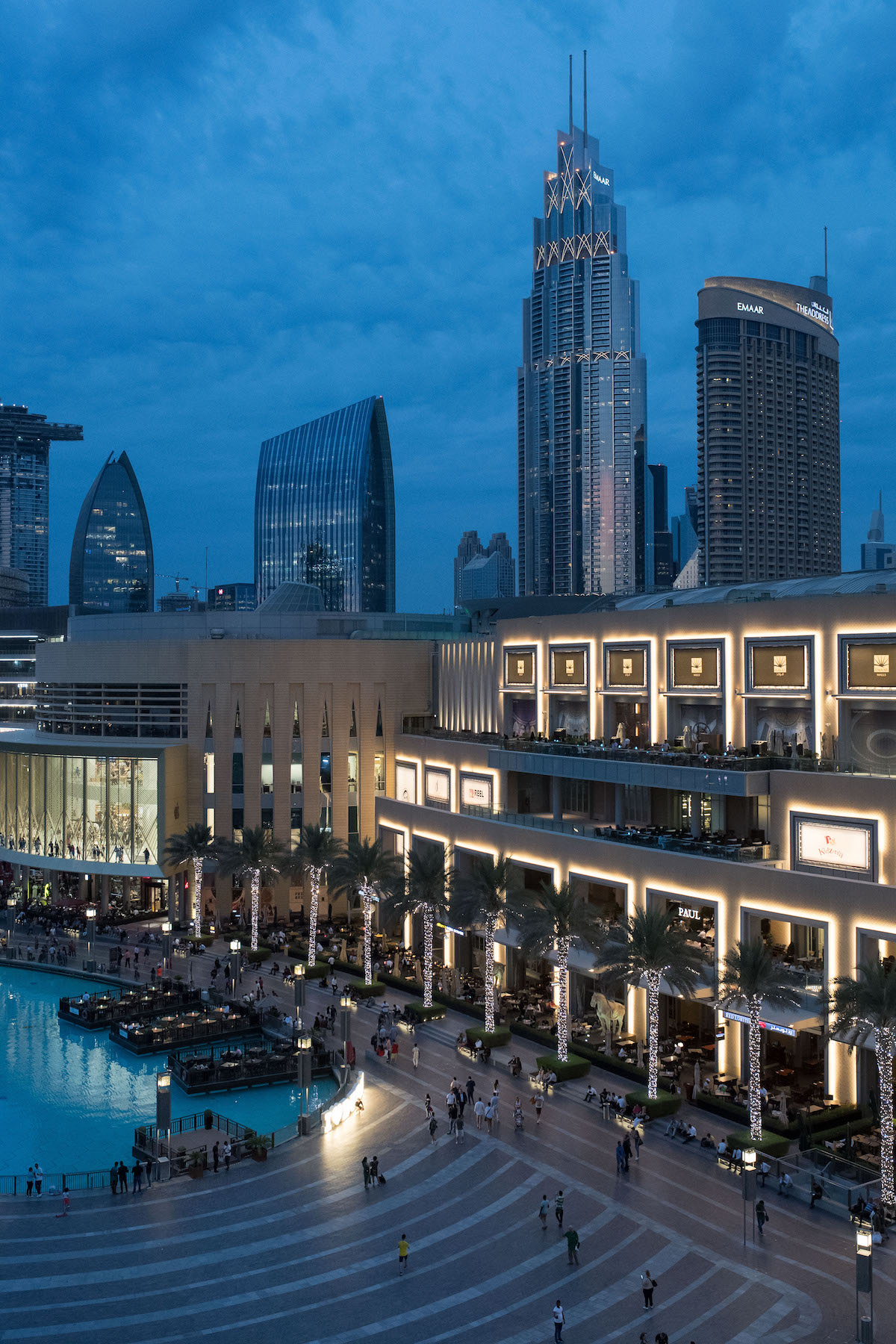 Who is the Emaar Hospitality guest?

With Dubai’s location, it is no surprise that Olivier asserts Emaar Hospitality’s guests hail from all across the world and includes both leisure and business travellers.

“Our main market is Saudi Arabia,” he adds. “We have other markets growing very strongly; China is one of them, the Chinese market grew by 60% alone from 2016 to 2017; it is an amazing growth rate. The Russian market grew by 100%.”

Dubai’s “blessed location” means it is accessible within a four-hour flight to a third of the world’s population, and is reached by two-thirds within an eight-hour flight. Its airports are some of the biggest global transit platforms for leisure and business travellers, and receives some 90 million passengers each year. This number is expected to increase to 120 million by 2025.

“When we hire people, we are looking for the sparkle in the eye,” enthuses Olivier. “We are looking for people who like people, fundamentally. We hire for personality, and then we train – that is the key element. Service nowadays is no longer scripted. Today it’s about recognising the needs of each traveller and how we can adapt to that. We let our great associates be themselves and align themselves to the needs of every traveller.” 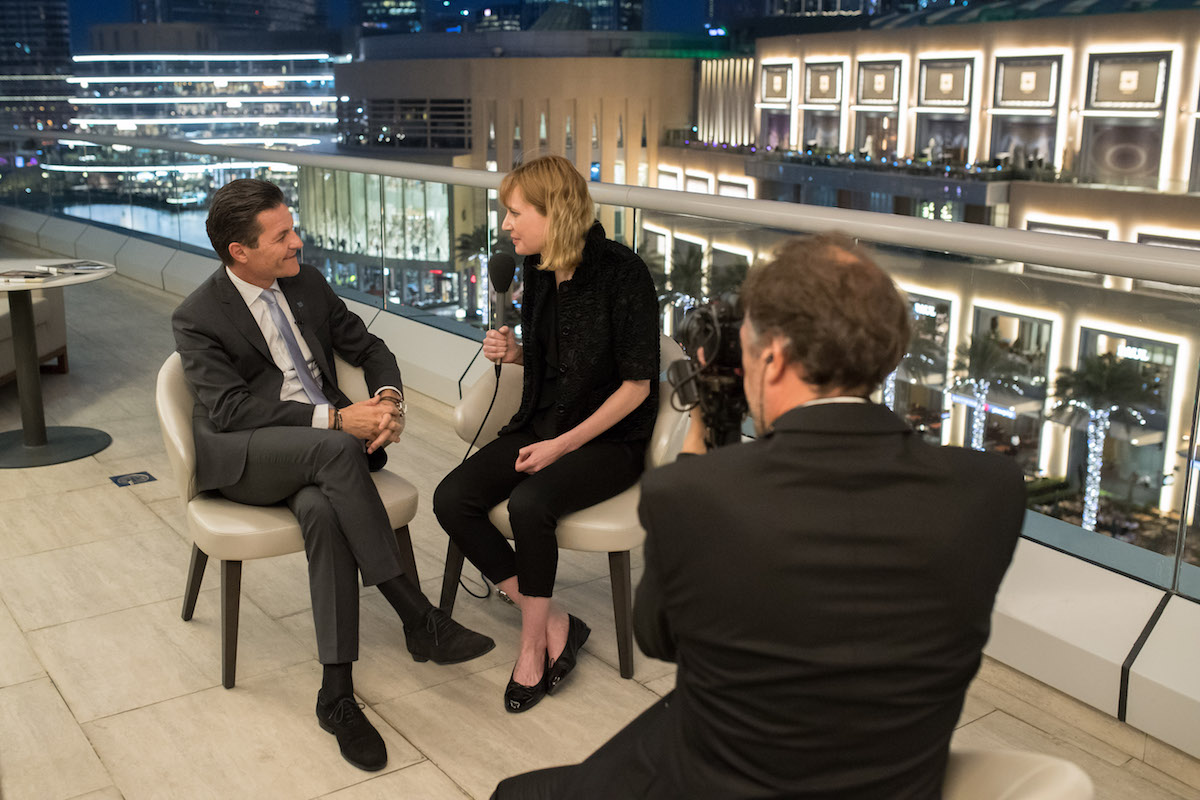 What is luxury to the CEO of a company that delivers such high-end service? It’s all about time and personal perception, notes Olivier. “Time is a luxury. Time is not expandable. Time is an incredibly valuable resource,” he says. “The definition of luxury is very individual, everyone has a different view of luxury and that is what makes the hotel business so fascinating.”

And as if to prove some kind of point on timing and luxury, right on cue at 6pm, the impressive musical fountain before us begins its performance, signalling the end of our interview.

Emaar Hospitality is the official hotel and hospitality partner of Dubai Expo 2020 during which visitors can expect to see a showcase by the Group on the innovations and trends of the hospitality industry.