The subsidiary of the world’s leading shipbuilding & EPC Contractor aims to be the world’s best in shipbuilding and offshore oil and gas industries. Now SHIN is behind an exciting development in Lagos. 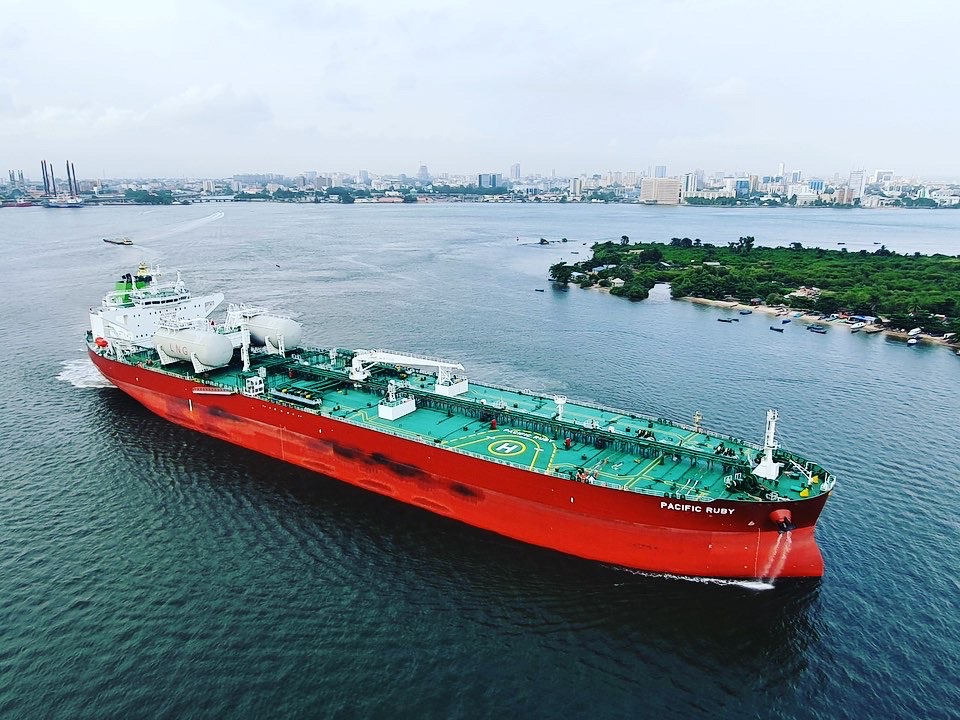 There was excitement among Nigeria’s maritime stakeholders following the berthing of an international vessel christened ‘PACIFIC RUBY’ at the SHI-MCI yard in Lagos which was invested in heavily by Samsung Heavy Industries Nigeria (SHIN) Limited.

The resumption of operations at the SHI-MCI yard has given a boost to the efforts of the global shipbuilding giant to use the yard, the first of its kind on the continent, to make Nigeria a hub of integration and fabrication of Floating Storage Offloading (FPSO) vessels, LNG tankers, ship repairs and shipbuilding in sub-Saharan Africa.

The SHI-MCI yard had made history as the first integration quay in Africa to receive a 330-metre long FPSO unit for the installation of six topside modules that were fabricated in Nigeria.

Being a reputable investor that operates in accordance with Nigerian laws, SHI-MCI applied for and received all the necessary approvals from the relevant federal government agencies, including the Nigerian Export Processing Zones Authority (NEPZA), for the berthing of PACIFIC RUBY.

In the application for the approvals, the Chief Executive Officer of SHI-MCI, Mr. Jinsu Park, informed the Nigerian government that “the purpose of the berthing at the quayside is for the vessel to undergo some maintenance works for a short period, not longer than two weeks.”

He listed the scope of works to include: Liquefied Natural Gas (LNG) tank cleaning, exchange of fuel filter and manhole insulation work.

Park also disclosed that the business of berthing of international vessels is line with the company’s activities in its Memorandum and Articles of Association.

Citing Clause 3 (b) (c) (d) and the omnibus clause 3 (g), Park pointed out that the enterprise is in marine vessels business “ and is allowed specifically in Clause 3 (d) to carry on the business of structures and facilities for marine vessels and all desirables thereof.”

According to Park, the berthing of the vessels at the SHI-MCI Quay for offloading and maintenance works is clearly in line with the company’s approved business activities as filed with the relevant agencies of the Nigerian government.

The berthing of the Pacific Ruby, which was also built by Samsung Heavy Industries Korea, on July 9, 2021 represented another milestones after the SHI-MCI yard had successfully fabricated and integrated the Egina Floating Storage Offloading (FPSO) vessel.

The Egina FPSO, designed for 25 years of operations, added 200,000 barrels of oil per day to Nigeria’s oil production, representing approximately 10% of the country’s total oil production.

Being the first project to be launched after the enactment of the Nigerian Oil and Gas Industry Content Development (NOGICD) Act of 2010, Egina FPSO advanced the Nigerian Content to record levels and has by far the highest Nigerian Content ever completed in an oil and gas project.

The hosting and maintenance of PACIFIC RUBY is the second major project to be handled by the SHI-MCI yard since the sail-way of the Egina FPSO to the deep offshore oilfield in August 2018.

Jeon said the cooperation received by his company from these agencies of the government was in line with President Muhammadu Buhari’s aspiration to support reputable investors in order to create employment opportunities and grow the Nigerian economy.

He said SHIN is in Nigeria for the long-term, pointing out that the company has demonstrated its faith in Nigeria through the huge investment it has made and in the training of Nigerians in the SHI-MCI yard and its Korean yard.

Jeon commended the Managing Director of NEPZA, Prof. Adesoji Adesugba for repositioning the export processing zones within one year of his assumption of office and called on the Nigerian government to continue to protect foreign investors.

He also called on the multinational companies to continue to launch new projects that will utilise its world-class fabrication and integration yard in Lagos.

With the arrival of the PACIFIC RUBY, business activities will resume at the SHI-MCI yard, which has been largely idle due to the inability of the oil and gas operators to launch new major projects after the Egina project.

It was gathered that before the arrival of the vessel, positive business activities were already gradually returning to the SHI-MCI yard as the Egina FPSO fire water pump engine was also taken to the yard for inspection.

The resumption of operations at the world-class integration and fabrication yard will create job opportunities for Nigerians, especially those who were trained by SHIN in the course of executing the EGINA project.

It will be recalled that when the Senate Committee and officials of NEPZA visited the SHI-MCI yard on June 15, 2021, the federal lawmakers, who were very impressed by the investment made by SHIN, were concerned that the yard was idle due to the many challenges caused by the free zone operator.

However, with the cooperation of NEPZA and other agencies of the government, the SHI-MCI yard is gradually resuming normal operations.

The Committee which was headed by the NEPZA MD, had spoken about the issue surrounding operating licenses when handled by the free zone management companies.

NEPZA stated that it was now important to issue the National Operating Licenses directly to all free zone companies to avoid the issues which had been emanating from zone management companies in the past.

These issues were believed to have caused a negative impact on business activities in the free zones and it was high time that it was resolved to bring back the confidence and businesses back to the free zones of the country.

Apart from providing job opportunities for those that have already been trained, the resumption of normal operations at the yard will also help more Nigerians to build local capacity, in line with Nigerian Content laws.