Chandramouli Ganesan’s tenure as Director of Chennai Airport has been a challenging one, but that’s exactly the way he prefers it. In fact, his 2016 arrival at Chennai Airport, managed by the Airports Authority of India (AAI), was greeted by Cyclone Vardah, a huge disruption in the airport’s otherwise eminently hospitable climate. But, as Chandramouli says, the challenges of the position are what drew him to Chennai to begin with.

“Would you like to go and join an airport where everything is fine, you have fantastic workers and you don’t need to do anything?” he says. “Or would you rather go to an airport where there has been a lot of difficulties and nothing much has been done? Honestly, I preferred the second option, because I’d rise to the challenge and be able to do something for the community.”

Before then, Chandramouli already had extensive experience across many of India’s airports, though he’d started as an electrical engineer before moving into management. His first role as Airport Director was in the Jammu and Kashmir region, a tough area to start with. He later worked in Pune, Calicut and Trivandrum before he finally settled in his current role in Chennai. Since then, he has worked to clarify the airport’s mission and purpose.

“My main objective was to force ourselves to understand who our customers were,” he says. “This is because there’s been a tremendous challenge in this area, so we’re trying to keep up with the customers’ needs. But that doesn’t work unless you have the proper infrastructure and facilities. Otherwise, you may never be able to meet the highly challenging demands of prospective customers.”

Chandramouli faces a number of difficulties along the path of infrastructure improvement, though he no doubt relishes the chance to apply his experience in air travel. For one thing, Chennai Airport has nowhere near the amount of space available to develop its facilities compared with other major airports. While it is a metro airport in the same category as the international airports of Bombay, Hyderabad and Bangalore (the last of which is spread out over 4,000 hectares), Chennai Airport is located on just 1,300 hectares.

Chennai Airport has thus seen serious competition, especially from Bangalore Airport. Being on the coast, Chennai Airport’s cargo complex did excellent business, until Bangalore began to encroach on the sector. Until that point, Chennai Airport had been growing 15%–20% year on year, having won Airport of the Year for Cargo Handling from 2010–12. But Chandramouli is ready to bring the cargo business back to Chennai.

“We have rebuilt it now, and are revamping our infrastructure there, including new features for security and baggage handling,” he says. “AAI had created a new subsidiary company, AAI Cargo, Logistics and Allied Services Company, which empowered them to make quick financial decisions. They’ve now started operations and will be managed by the airport but have the mandate to make certain decisions independently, for a more customer-focused approach for our import–export community.”

Since then, Chennai’s cargo-handling has seen gradual growth once more, though Chandramouli doesn’t expect business to return to normal immediately. “We are
trying to address this because nowadays commercial aviation prices are very competitive,” he explains. “To subsidise our costs and tariffs, cargo is a major requirement for commercial airlines.”

Nevertheless, Chandramouli’s agenda of infrastructure improvement continues unabated, airport-wide. The old Kamaraj Domestic Terminal has been demolished to make way for new terminals, as part of a modernisation initiative; these new terminals are expected to be ready within three years. Meanwhile, a 2,000-capacity, multi-level carpark is being constructed around the Chennai Airport Metro Rail station, and is expected to take care of demand until 2030.

Of course, in such a busy location, it’s no easy task to carry out this extensive modernisation. “We have to do this work in an operational airport without inconveniencing other stakeholders,” Chandramouli explains. “We have a challenge on our hands. But we have made plans to manage how we can complete one task and move on to the next, without disruption.” While Chandramouli is working to bring the airport’s existing infrastructure up to date, he is still looking at other opportunities for India’s fourth busiest airport. In particular, he believes a second airport is a necessary next step as Chennai’s air traffic continues to grow.

“Having worked in a greenfield airport, I know it typically takes six to seven years for an international airport to become fully operational,” he says. “That’s if you don’t have the land. If you do have the land, you can do it in three to four years. We’re now in the process of finding land. Before this airport becomes saturated, we need to have a second airport; with defined operations at both airports.”

This is not to say Chandramouli is putting all his eggs into one basket, however. He plans on continuing Chennai Airport’s tradition of operational excellence. He is particularly proud of its time management record; indeed, he’s not the only one to recognise this. In the past two years, the Airport has received awards from the governmental tourism organisation Incredible India and the Tamil Nadu Department of Tourism. Most impressively, the airport recently ranked third in the 15–25 million passenger category for the Airports Council International’s Best Airport Awards.

Chandramouli puts this down to several of Chennai Airport’s unique advantages. “One is that the climate is very good for airport operations,” he says. “You have very few diversions from this airport, unlike with the other airports around us. Mother Nature is really on our side so we don’t encounter poor weather, aside from that cyclone in 2016. The second thing is there are few airports that are as close to the city. We’re also beautifully connected by Metro and suburban trains, and a bus service. You can’t get this in any other major international airport, I’m sure.”

Chennai Airport’s Director is quick to congratulate his staff on their strengths, though he keeps an eye on the potential for improvement. “I provide encouragement first,” he says. “Every six months a new officer comes. It’s a continuous process, and I try to ensure that they are developing. Always enrich, enhance and empower.”

This is indeed what defines Chandramouli’s leadership style. He believes in bringing staff into his processes, so that they can understand what he’s doing. That way, he provides an insight into his expertise and prepares for eventual succession. In fact, he says he wants his entire team to go on to become airport directors, with even greater success and skill than he himself has enjoyed.

Chandramouli applies this same strategy to Chennai Airport’s relationship with its partners. “We look at what is happening there that can suit us, or how we can modify it to suit us,” he says. “By the time you finish a project, it may be outdated, if you are delayed. Given that technology is fast-changing, change is the only mechanism for survival. We are adapting ourselves to these changes, and making changes of our own.”

Whether it’s his team, his partners or his contractors, collaboration is an integral part of Chandramouli’s management style. It’s entirely necessary, since Chennai Airport is comprised of a network of departments and organisations working symbiotically. For example, the baggage system is handled by four different agencies: the airline’s ground handling agency; the conveyor operation of Chennai’s electrical department; the Customs inspection staff; and the in-terminal baggage handlers.

Such a complex system requires proper coordination and clearly defined responsibilities. Fortunately, Chandramouli has ensured Chennai Airport is a well-oiled machine.But the most important element of keeping this network functional is making sure every party is happy. “We need to ensure they are treated well,” Chandramouli says.

“If a contractor is asking for permissions, we ensure clearances are granted in time, because these are critical projects we’re implementing. I meet with the contractor and our engineers. Often, if I anticipate a delay, I try to fix it early, with teamwork. I then take them on board as my partner, treat them with care, give them due respect and ensure they are paid on time.” 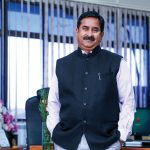