Our product is only as good as our service: Denzil White Denzil White has dreamed of flying since he was a boy. “I’ve always been amazed that one can beat gravity. This passion for aviation has never worn off,” he says. Going on to pursue a distinguished 20-year career in both military and commercial aviation, Denzil has completed numerous tours with the South African Air Force in senior ranks such as Group Commander Air Reserve Squadrons, Officer Commanding of Joint Offensive Support Centre and 11 Squadron.

“Since aviation came about in the early 1900s, the technological advancements over the past 100 years have been absolutely phenomenal. As a pilot myself, I’ve been fortunate enough to cheat gravity in a number of different aircraft,” he recalls. With Airline Transport Licences for South Africa, the US and UAE, Denzil has logged nearly 10,000 flight hours, including experience in helicopters, Learjet, Challenger and Global Express aircraft.

Following his retirement from the air force in the early 1990s, Denzil co-founded international business aviation company ExecuJet, helping it grow its operations from zero to 150 business jets before handing over the reins to Luxaviation. After two years with Hong Kong-based Metrojet, in 2014, Denzil joined Hongkong Jet, initially as COO, then moving into his current role as CEO less than a year later. Since Denzil took control of the yoke, Hongkong Jet has turned profitable, enjoying more than 25% year-on-year growth with the managed fleet expanding from 12 to 33 aircraft.

A time machine of sorts

Launched in 2009 at the peak of the Chinese jet market’s growth, Hongkong Jet is now the largest integrated business aviation group in the Asia–Pacific region. Offering extensive management, charter, maintenance and registry services, as well as a deep knowledge of business jet operations throughout Asia–Pacific and globally, Hongkong Jet provides its clients with a safe, rewarding, flexible and all-inclusive solution to corporate travel. As part of the HNA Group and a subsidiary of Deer Jet, Hongkong Jet has a number of subsidiaries including Asia Jet and Business Aviation Services Guernsey.

“Most people would say that business aviation forms part of the transport community, but we see it as facilitating face-to-face global communications – a time machine of sorts. We have the ability to get someone from Hong Kong to London overnight, just in time for their morning meeting,” Denzil notes. “Together with Deer Jet, we have grown our fleet from 12 in 2013 to more than 85 today, which includes a 787 Dream Jet, Boeing Business Jet, Airbus ACJ330 and a handful of smaller corporate jets.”

Central to this growth is Hongkong Jet’s vision to become a market leader and the most respected business aviation service provider throughout Asia–Pacific and beyond. “We’ve introduced a set of four business values – safety, service excellence, sustainability and profitability – to guide us in our journey. Because we operate in such a highly regulated environment, we have worked hard to infuse a safety culture throughout the company,” explains Denzil.

“We’ve worked hard to infuse a safety culture throughout the company.” 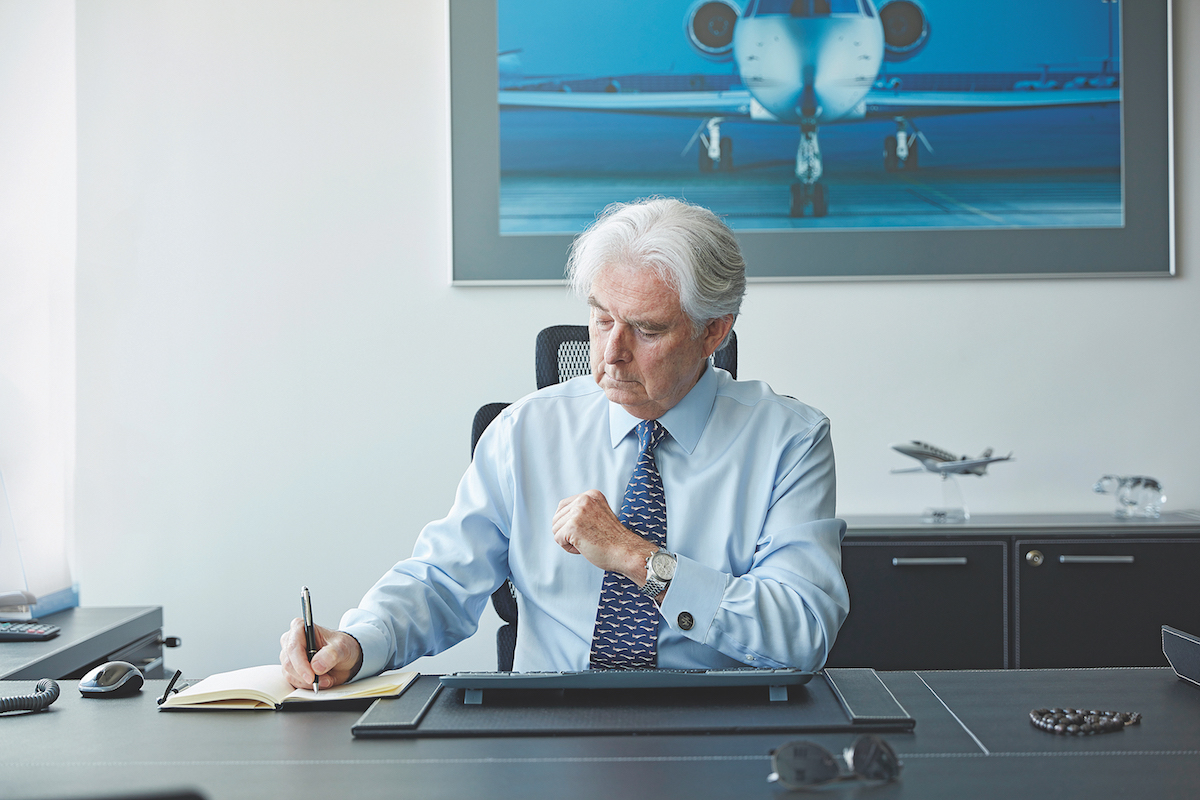 Through its online safety management platform SERA, the company now offers flight data monitoring and SMS notifications for both its commercial and private suites. “Using evidence-based training, we’re able to identify any crews or business recruits throughout the world who may be underperforming, letting us know where to focus our training efforts. As a result, we’re proud to say we’re one of only four companies in Asia–Pacific to be awarded the prestigious IS-BAO level III safety rating in 2016.”

To uphold its commitment to service excellence, Hongkong Jet has specific personnel dedicated to each client, who can speak their native language and respect cultural requirements. “All client information is updated in our database so we can provide trustworthy and personalised services. After all, our product is only as good as our service,” says Denzil. “We’re also transporting presidents and dignitaries around the world, so confidentiality is paramount.”

“It may sound obvious, but a good leader is someone who leads, rather than getting involved in management – because there is a strong distinction between the two. Management is something most people can do, but a true leader must be inspirational – and that’s not nearly as easy.”

Working towards its sustainability objectives, Hongkong Jet has a targeted 20-year plan, broken down into five-year segments. “We’ve already expanded into Malaysia, but we’ll definitely continue to identify strong business jet communities throughout Asia–Pacific and the surrounding areas,” Denzil notes.

“Disruptive technology will play a huge role in our future development. With supersonic business jets promised to arrive in the coming years, clients will want to fly direct from the US to Europe. Single-pilot and even pilotless commercial flights is another change we have to consider on the 20-year horizon, not to mention pilotless drones for intercity transportation.”