Driven By the Best: Dietmar Hunecke Everyone loves a story that begins with an apprenticeship and ends with a top job in a corner office. Such is the inspiring journey of Dietmar Hunecke, who started out as a toolmaker at Mubea’s headquarters in Attendorn, Germany nearly four decades ago and is now Managing Director of Mubea Automotive Components China.

His challenges, particularly since taking on the role in mid-2019, have been monumental, mostly triggered by external circumstances such as China’s decreasing automotive market and COVID-19. “Sometimes I apologise, joking with my people at Mubea that since I took over, the crises have come,” Dietmar laughs.

Mubea is a global leader in the development and production of automotive parts, a specialist for high-strength spring components and other lightweight products for chassis, lightweight car bodies and powertrains.

It employs 14,300 people in 45 locations around the world and has been an owner-operated family company since it was founded in 1916, with the name derived and trademarked in 1931 by combining the two founding families’ names.

“The first family is Muhr, giving the M-U, and the second family is Bender, so you have the B-E. The A is for Attendorn, which is still the global headquarters of Mubea,” Dietmar explains.

In China, Dietmar is responsible for 1,200 Mubea employees working in five plants throughout the country. Three, along with its headquarters, are located in Taicang where Dietmar commutes from Shanghai, and the other two are in Shenyang and Kunshan.

Dietmar began his toolmaking apprenticeship with Mubea in 1982 and spent 15 years with the company moving into quality control, testing and development, before working in sales.

He left to launch his own business importing and exporting a variety of products, including stamping machines, decoilers and components for electrical and household goods. In 2007, he was approached by Mubea to return to the company and manage sales in Asia.

“It was an interesting opportunity as my previous role with Mubea focused on South America, Europe and the US,” Dietmar says.

We emerged in very good shape and performed above our original 2020 budget.

“I came back as a Sales Director encompassing India, China, Korea and Japan. I moved to Japan in 2008, spending a year there before I moved to China. Mubea had launched there in 2004 and operations were still in their early stages, with maybe only about 30–50 people producing one or two products. That was 2005–2007, and in 2010 more people had already been employed. But it was certainly a challenge getting the investment in place and new people trained.”

Dietmar returned to Attendorn in 2010 to lead global sales for one of Mubea’s business units, only to return to China four years later as the Director of Powertrain and Industry.

The company had expanded and was enjoying consistent double-digit growth; however, by the time Dietmar was appointed Managing Director, China’s decreasing automotive industry was having an impact.

“Suddenly, from 2018, we found ourselves in a kind of stagnating situation,” Dietmar shares. “Then in July 2019, just as I took over as Managing Director, China experienced a fall in the market for the first time ever.

“These were unforeseen challenges and I had to change strategy. I couldn’t think about double-digit growth anymore, I had to focus on being sustainable and leaner instead to offset the decrease in the market. That meant reconfiguring company targets and increasing our market share. At the end of the day, we achieved a better result than what was budgeted, despite much lower sales, a huge success for 2019.” 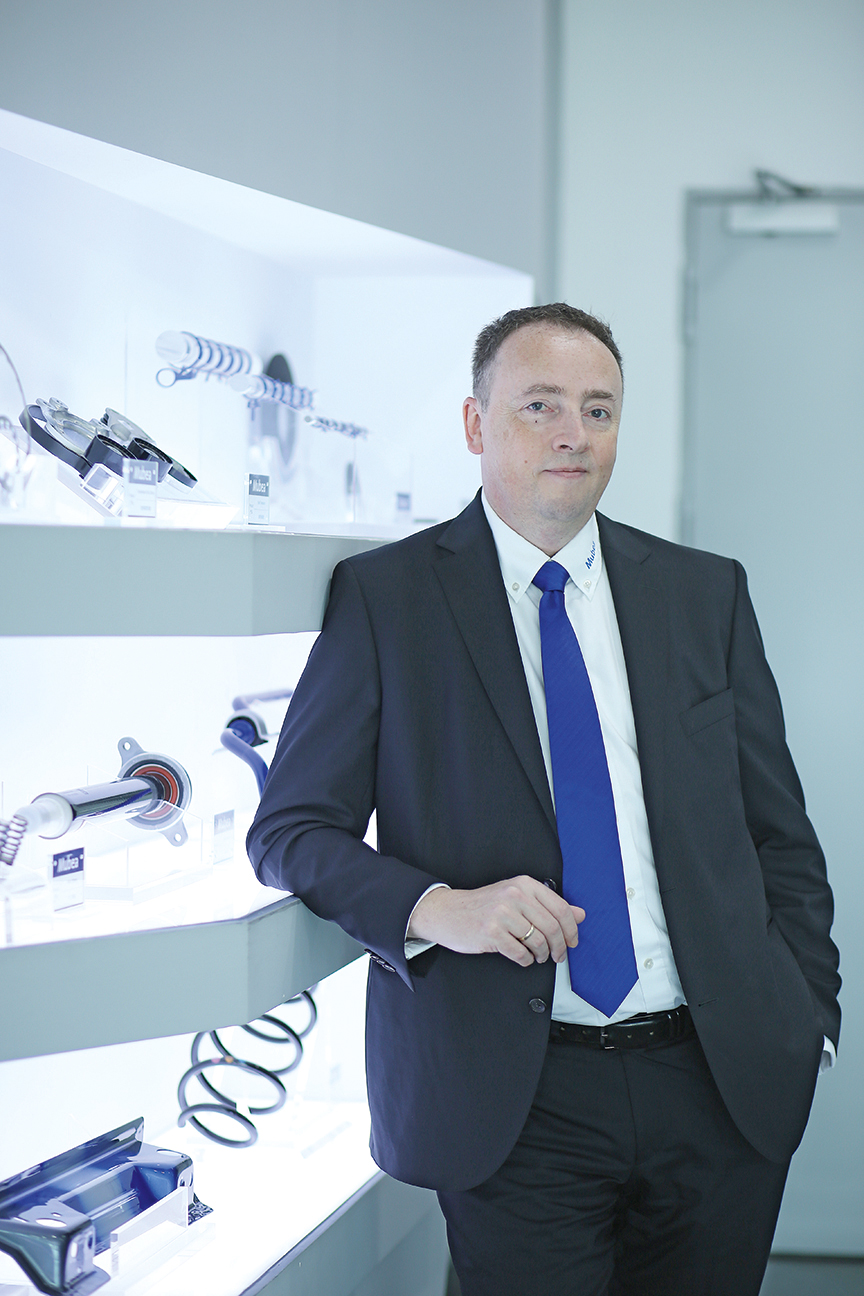 Just as Mubea showed promising signs of stability and market growth, COVID-19 hit and once again, Dietmar was forced to roll with the punches and adapt quickly to a dramatic change in operations.

His challenge became even more extraordinary when he found himself “trapped” in Germany when China closed its borders. For three months, he was forced to lead his teams from more than 8,500 kilometres away, waking at 4am to cater to the time difference.

“It was quite busy and certainly an interesting experience,” he reflects. “Of course, China was hit by COVID-19 very early compared with the rest of the world so we had to learn to operate starting from scratch with no other examples to learn from.

There was no ready-made concept on the table to copy, to protect our employees and safeguard production while still ramping up customers. We set up measures like hygiene concepts, cleaning surfaces regularly, wearing masks, temperature controls and an app to control the travel history of our staff, just to name a few.

“Then there was the additional problem of employees not allowed to return to work because their own hometowns were locked down. It was a very complicated situation. But we managed it with zero infections among our employees and meeting all our supply deadlines. We emerged in very good shape and performed above our original 2020 budget. That is by far our biggest achievement.”

Dietmar says that while the company is adjusting to the “new normal” of almost no market growth, it also has to deal with increasing competition. He says the solution lies in catering to the demand for rapid innovation, with Mubea beginning its own research and development to manufacture products “in China, for China”.

It’s a target Dietmar is casually confident of meeting thanks to the support of Mubea’s young team, most of whom are aged under 34 – a good 20 years younger than him, but they’re a welcome consolation. “It’s a win–win situation,” he explains.

“My young team wins with my rich coaching and experience drawn from working with different cultures in a global market in different roles. Meanwhile, I’m kept busy learning from them. They’re very open-minded and can trigger change very quickly to meet an agile market situation, and that is exactly what is required now.”

Describing Mubea as a “hidden champion”, Dietmar believes the company’s excellent reputation has been justifiably earned by its employees and strong company culture.

We are focused on providing customers with solutions and that goes back to our founding days.

Based on the mantra “driven by the best”, he says Mubea’s rich 100-plus-year history has always relied on outstanding performances from its employees, a team armed with ambition and initiative to innovate and constantly exceed customer expectations.

“We are focused on providing customers with solutions and that goes back to our founding days,” Dietmar explains. “We have a global Mubea gene which is to be open-minded and that’s how we’ve taken leadership to become the first in the market to develop and produce very advanced products. 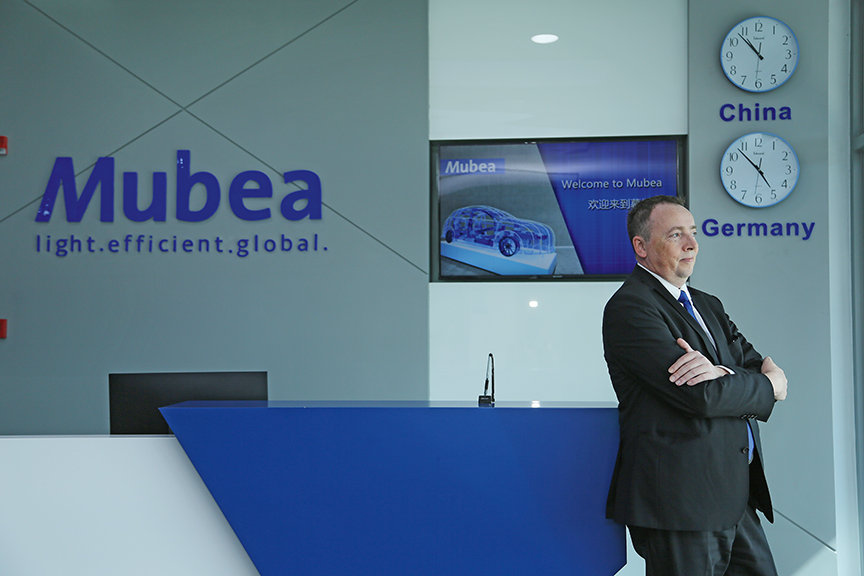 “‘Driven by the best’ is the Mubea way. It refers to our customers who drive us to perform better and strive for the best, to always be light, efficient and global. But it also refers to our employees who are ambitious, focused and open-minded.”

Of course, the company also includes its service suppliers – most of whom were also vulnerable to the impact of COVID-19 – in its mission to be the best. Dietmar says that even though Mubea China’s market is predominately domestic, disruption was triggered by border closures differing from one province to another during the pandemic.

He explains that long-term and trusted relationships, such as the partnership with Easytrans Logistics (Suzhou), facilitated solutions to meet customer targets. “They did a really outstanding job making sure our goods were supplied on time, despite obstacles such as road closures and a lack of drivers and transportation capacity,” Dietmar reflects. Also, Dalian Rode is a long standing distributor of Mubea’s industrial springs in the North of China for more than 10 years.

“Having a good relationship with our partners and suppliers makes such a difference.” Mubea’s excellent staff training programs, ranging from junior management to senior leadership roles, have also ensured the company will continue to flourish, no matter the challenges thrown at it.

Dietmar acknowledges he’s solid proof that a successful career path can be forged and encourages everyone at the company to take advantage of the opportunities offered. He says that being forced to switch mode very quickly from normal operations to crisis management over the past 18 months also taught him a lot about leadership.

However, he admits it was valuable advice given while he was an apprentice that has often pushed him through. “I was having difficulty disassembling a huge tool,” he remembers.

“A boss told me that nothing is impossible – it’s all about your mindset and looking beyond what might be the obstacle. That’s always stayed with me.” Asked whether he thought it was actually perfect timing for him to be appointed to the helm when the company was at its most vulnerable, Dietmar is humble in his response.
p
“Yeah, I do have rich experience and more than 25 years’ experience in leadership,” he says. “Obviously, it’s not for me to judge myself, but maybe I really have been the right person at the right place in the right time.”