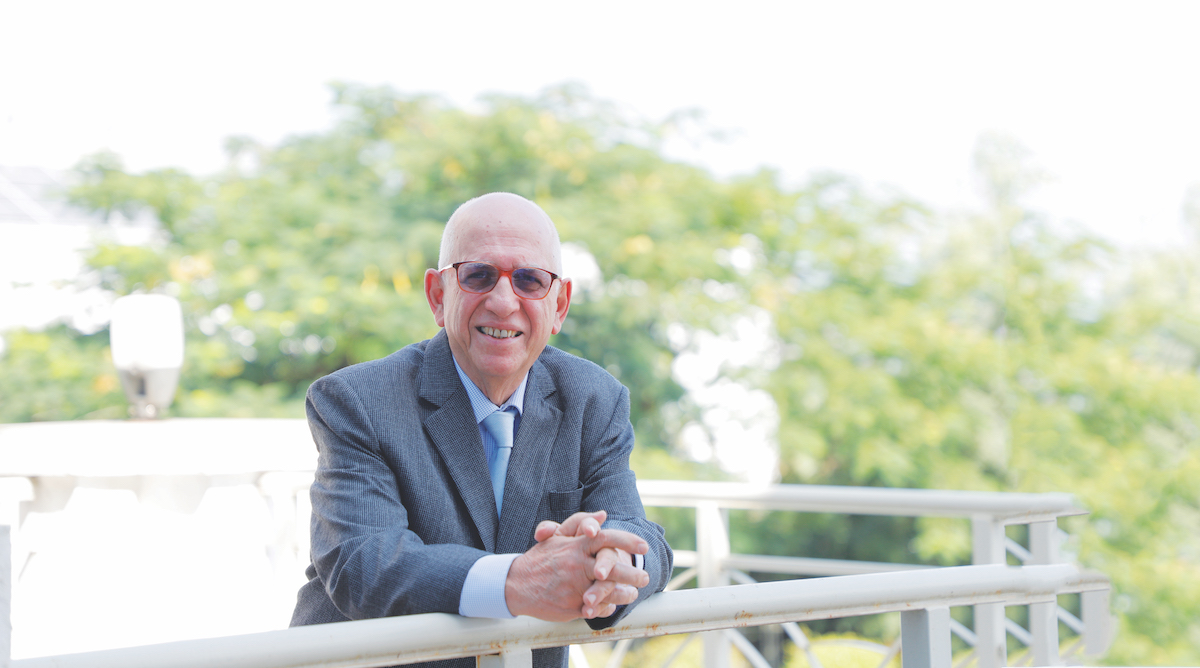 What are the keys to building and sustaining a successful business? For the Cooper Corporation Chair and Managing Director, Farrokh Cooper, it’s about commitment and a well-thought-out plan.

“If you want to do business properly in India, the government gives you enormous opportunities by way of subsidies or land, but you have to be committed to see it through,” he says.

Farrokh helms Cooper Corporation, a family-owned business that develops a wide range of automotive parts from engines and generators to crankshafts, pistons and flywheels.

Based in Satara, India, the company has 12 manufacturing sites that design, produce and distribute its products around the world. Farrokh has been with the Cooper Corporation for 51 years and says that business management requires being smart with the money you earn.

“You shouldn’t divert your money to real estate and the stock exchange, make a fast buck, and then go back to your main business,” he advises. “It’s about commitment. You have to have your feet on the ground. You must not let money make you change your behaviour or personality.”

Farrokh describes himself as an unconventional CEO. “I do things that people say I shouldn’t do,” he admits.

“For example, we’re the only family-owned company that makes engines from five to 1,210 horsepower. Previously, these were in the arena of big multinationals. We did it without a tie-up. We did it in India, with Indian people, and we have succeeded.”

While the Cooper Corporation is well known for its automotive products, its origin is in the liquor industry. Farrokh’s grandfather, Dhanjisha B Cooper (DB Cooper) was the family’s first entrepreneur.

DB’s father built wood barrels in a distillery, inspiring his son to start a liquor business by extracting toddy – the sap from palm trees – from their own plantation. This evolved into a successful liquor business, which included a large number of stores.

With the profits from the liquor business, DB later established a company that built ploughs and other agricultural equipment. Eventually, the business became involved in making diesel engines – Farrokh’s grandfather was the first person in India to develop them – and culminated in what is now Cooper Corporation.

Farrokh’s journey to the business didn’t follow a traditional path. His father had been an agriculturalist but died before Farrokh was born. “My mother and I went through life doing everything that needed to be done,” he says. As a child, Farrokh was sent abroad to do his schooling in England.

“I used to travel from Bombay (Mumbai) to London and that was the backbone of my life. I was in school with the relatives of the rich and famous; the kings, the sultans – you name it. But we were all equal. And then I came back on my own and went into agriculture.” In 1967, Farrokh’s older brother – who was managing part of the family business at the time – was involved in an accident, leaving its future up in the air. While Farrokh had planned to work in the agriculture industry, he now made the decision to assume responsibility for the company.

“The two choices I had were either I run it or close it,” Farrokh says. “As they say, there are three possible reactions: fright, flight or fight. I chose to fight.”

“In simple words, with everything, take the opportunity as it comes and don’t delay.”

While managing the automotive business wasn’t something Farrokh had planned to do, he did it anyway. Since then, he has seen it flourish under his leadership. “I take on challenges; I never say never,” he says. “In simple words, with everything, take the opportunity as it comes and don’t delay.”

Moreover, Farrokh is grateful for the opportunities he has had with the business so far.

“Whatever I am today; half is what I inherited, and half is what I made. But what I inherited was an enormous amount of goodwill, because my grandfather made diesel engines back in 1922. He was in politics, and was the first chief minister of the former Bombay Presidency. That legacy is something that he handed down.”

“What I inherited was an enormous amount of goodwill.”

The Indian automotive industry has gone through massive changes over the years. Between the 1960s and 1980s, Hindustan Motors dominated the market, especially with its Ambassador model. It was also hampered by trade restrictions placed on imports, which limited outside competition.

Then, in 1991, the liberalisation of the economy came, allowing international car companies to enter India. The entry of Maruti Udyog (now Maruti Suzuki) – a joint venture between India’s Maruti and Japan’s Suzuki – brought competition to Hindustan Motors and signalled the arrival of other players into India and the growth of the country’s motor manufacturing industry as well.

Within the broader changes in the automotive industry, Farrokh has been witness to many positive transformations at Cooper Corporation. “It is phenomenal. When I started in the business, getting a telephone line was a problem. I remember having to buy copper wire to lay the line to my factory. At the time, we had a manual exchange – we had a little box that would ring, and the operator would come on the line and ask you what number you wanted. Then we had an automatic exchange, FedEx, fax, and then email. So everything has changed.”

Supporting Satara in the years since it was established, the Cooper Corporation has been supporting the people of Satara. “I have 300 people in my factory who have worked here for 30 years,” he notes.

“I have almost 3,000 people working with me in total, all within the neighbourhood. I don’t bring in people from north, south, east, west of the country.”

In addition, the company has implemented several corporate social responsibility initiatives throughout India.

In terms of education, it has been involved with the Sainik School in Satara; establishing smart digital classrooms, expanding its library with more than 1,600 books, providing e-readers and creating an audio-visual media centre for one of its conference rooms.

In other schools, Cooper Corporation has distributed school uniforms, created awareness of nutritious food and built a toilet block for students.

In terms of health care, the company developed a cancer check-up camp for women and also organised blood donation areas. Then, with regard to the environment, it has distributed tree saplings to schools as well as supported cleanliness campaigns and water conservation initiatives.

Further, Cooper Corporation has raised social awareness about using eco-friendly Ganesh idols rather than the traditional variety that are made of plaster of Paris and toxic chemical colours – substances that are harmful to the environment.

The Cooper Corporation received approval from the Automotive Research Association of India to build a series of gas generator sets (gensets) that meet new Indian emissions standards. The standards are instituted by India’s Central Pollution Control Board and state that all importers, manufacturers or assemblers of gensets in India have to comply with cleaner emission standards. As a result, the Cooper Corporation will produce natural gas and LPG varieties along with its existing diesel range that all comply with the new standard. These gensets will not only produce lower emissions, but generate less noise as well. They will be available for use in hotels, retail outlets, homes, offices, telecommunications towers and hospitals.

In the Satara community, the company supported the reform centre in the Satara District Prison by providing a library, computer lab and counselling services. It is also involved in programs that support farmers and initiatives such as Swachh Bharat (Clean India Mission), which is focused on cleaning up the city streets.

Farrokh says the Cooper Corporation has been successful due to its core values of integrity, honesty, sincerity, fidelity and transparency. “It is about trust,” he says.

“It is about leading from the front and carrying people with you. If you have this in your pocket, you can do anything. You have to live happily in your own environment. You have to be confident that what you’re doing is what you want to do. And then the rest follows.” When it comes to internal operations, Farrokh doesn’t worry about the everyday challenges within the business. “I don’t see much of a challenge, provided you’re disciplined, focused and you know what you want to do, then the rest just follows.”

Instead, what keeps him awake at night is something closer to the heart.“The biggest challenge I face is driving on the road,” he says.

“All my family members have crashed on the road. I am the only one who is accident free. My wife was knocked down by a hit and run motorcyclist. I hate the sight of the hospital. More needs to be done about national safety.”

The cooper advantage there are three main factors Farrokh identifies that set Cooper Corporation apart from its competitors. “Technology, customer relations and quality,” he says.

“We supply 50% of what we make to America, Europe, England, Russia, China, Vietnam, Sri Lanka and Africa. We have about 100,000 vehicles from the Ford Motor Company that have our components in their engines every month; Jaguar buys a huge quantity of liners from us; and our gensets travel the world.”

The fourth factor he states is the Cooper Corporation’s ability to provide its customers with choice. “In business you have to present a variety of facilities and products, and personalise the relationship because it carries everything forward,” he notes.

Farrokh acknowledges the support the company’s suppliers and stakeholders bring to the business, which contributes to its ability to run smoothly and efficiently.

“The business moves without you knowing it. And, in life actually, when you come to a point that you don’t want to have to impress anybody, your freedom is guaranteed. And this results in tremendous generation of goodwill.”

“We have a policy of having the same behaviour to our stakeholder, whether they be a supplier, a nabob or a minister. That transparency, I think, wins the day. If your people are committed to you, they’ll do anything for you. You can make your demands but give them a fair deal.”

The Cooper Corporation signed an agreement with Garden Reach Shipbuilders and Engineers to build marine Diesel engines for the Indian Navy and Indian Coast Guard in 2017.

At the end of the day, Farrokh reiterates his belief in commitment when it comes to strengthening the company’s supplier relationships.

Further, to keep these partnerships alive globally, Farrokh emphasises the importance of sticking to your word. “Internationally, you have to give a verbal agreement and the same agreement has to be put in an email the next morning,” he says. “You cannot twist and turn to your advantage. You have to stick to your word.”